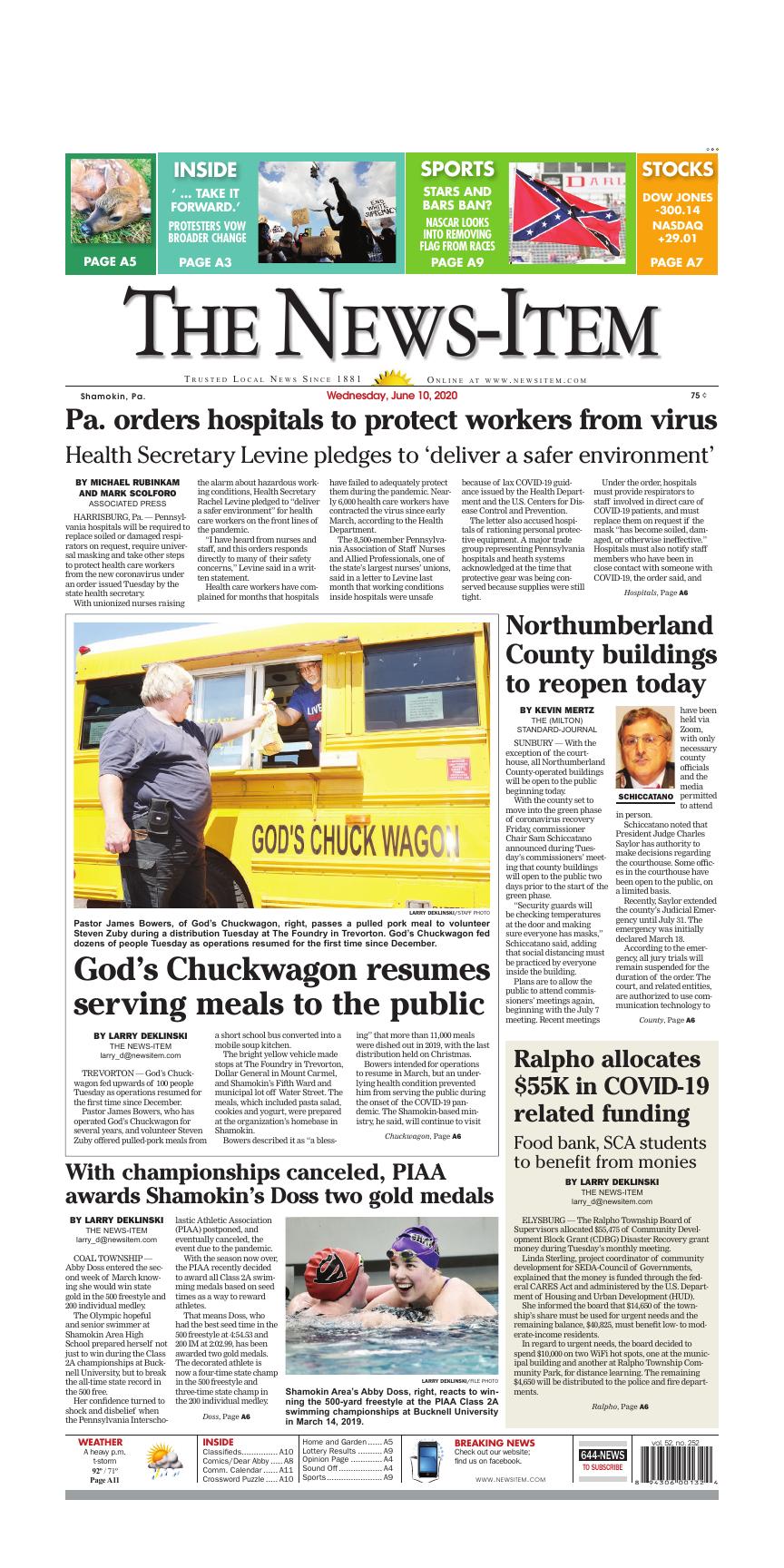 Pastor James Bowers, of God’s Chuckwagon, right, passes a pulled pork meal to volunteer Steven Zuby during a distribution Tuesday at The Foundry in Trevorton. God’s Chuckwagon fed dozens of people Tuesday as operations resumed for the first time since December.

Pastor James Bowers, of God’s Chuckwagon, prepares to serve pulled pork during a distribution Tuesday at The Foundry in Trevorton.

The bright yellow vehicle made stops at The Foundry in Trevorton, Dollar General in Mount Carmel, and Shamokin’s Fifth Ward and municipal lot off Water Street. The meals, which included pasta salad, cookies and yogurt, were prepared at the organization’s homebase in Shamokin.

Bowers described it as “a blessing” that more than 11,000 meals were dished out in 2019, with the last distribution held on Christmas.

Bowers intended for operations to resume in March, but an underlying health condition prevented him from serving the public during the onset of the COVID-19 pandemic. The Shamokin-based ministry, he said, will continue to visit communities in Northumberland, Schuylkill and Montour counties.

Bowers and his wife, Janet, and just a handful of volunteers operate God’s Chuckwagon. He said if more volunteers came forward he would offer additional meals.

“Last year, the last three of four months, I had to go out alone because we didn’t have the volunteers,” Bowers noted.

Tuesday’s distribution was the first for Zuby. The Coal Township man said people require assistance more than ever.

“I was pumping gas and saw people paying with change because they did not have enough money to fill their tanks,” he said. “There is a lot of need out there.”

Shamokin Area’s Abby Doss, right, reacts to winning the 500-yard freestyle at the PIAA Class 2A swimming championships at Bucknell University in March 14, 2019.

COAL TOWNSHIP — Abby Doss entered the second week of March knowing she would win state gold in the 500 freestyle and 200 individual medley.

The Olympic hopeful and senior swimmer at Shamokin Area High School prepared herself not just to win during the Class 2A championships at Bucknell University, but to break the all-time state record in the 500 free.

Her confidence turned to shock and disbelief when the Pennsylvania Interscholastic Athletic Association (PIAA) postponed, and eventually canceled, the event due to the pandemic.

With the season now over, the PIAA recently decided to award all Class 2A swimming medals based on seed times as a way to reward athletes.

Doss has mixed emotions about achieving her sixth and seventh gold medals while not having a final opportunity to showcase her talents as an Indian.

“I think in every school there are seniors who feel great that they got medals and worked hard for them, but they also feel they didn’t receive the medals for winning them,” she said. “Just being able to get the medals is a very good end point to my high school swimming career, but (swimmers) never got the final say.”

She expressed disappointment that her younger sister, Gabby, and teammates Madi Bridy and Gabby Greager were also robbed of their moment to compete in the 200-yard medley and 200-yard freestyle relays.

For Greager and the eldest Doss sister, the two seniors were looking to leave it all in the pool during their events.

Doss said her season could have turned out much worse, noting that athletes who were set to compete in spring sports only made it through practices when schools shuttered their doors in mid-March.

Facility closures also meant that athletes had to find alternate means to stay in shape — a not so easy task for a swimmer in early spring.

Doss was swimming thousands of yards per practice at Susquehanna and Bucknell universities prior to the pandemic, but the training came to an abrupt halt when the campuses closed.

The North Carolina State University commit entered the water at Edgewood Swim Club on Tuesday following a three-month hiatus. She was relieved to restart training, even if it meant adjusting her strokes due to the smaller size of the Coal Township pool.

“I was swimming 8,000 yards per practice in the middle of the season. I swam 3,000 yards on Tuesday while figuring out my stroke count,” she said. “I am trying to get back the feel of the water and find my rhythm.”

On the advice of coaches, Doss said she will slowly increase workouts to prevent injuries, and expects training to increase after moving to college later this summer.

She said, “The season at North Carolina State doesn’t start until December, but the coaches already told me to ‘get ready’ to start training.”

SUNBURY — With the exception of the courthouse, all Northumberland County-operated buildings will be open to the public beginning today.

With the county set to move into the green phase of coronavirus recovery Friday, commissioner Chair Sam Schiccatano announced during Tuesday’s commissioners’ meeting that county buildings will open to the public two days prior to the start of the green phase.

“Security guards will be checking temperatures at the door and making sure everyone has masks,” Schiccatano said, adding that social distancing must be practiced by everyone inside the building.

Plans are to allow the public to attend commissioners’ meetings again, beginning with the July 7 meeting. Recent meetings have been held via Zoom, with only necessary county officials and the media permitted to attend in person.

Schiccatano noted that President Judge Charles Saylor has authority to make decisions regarding the courthouse. Some offices in the courthouse have been open to the public, on a limited basis.

According to the emergency, all jury trials will remain suspended for the duration of the order. The court, and related entities, are authorized to use communication technology to conduct other court proceedings.

Following Tuesday’s meeting, Schiccatano said he had been calling the office of Gov. Tom Wolf nearly every day asking for Northumberland County to be switched to green status. While he never spoke with Wolf, Schiccatano said he spoke several times with an assistant to the governor.

Schiccatano has received positive feedback from residents who are glad Northumberland County is moving into the green phase.

“People in our county desire to be open,” Schiccatano said. “We are excited about Northumberland County small businesses opening up.”

It was announced during the meeting that county buildings will be closed Monday for Flag Day, and Friday, July 3 in observance of Independence Day.

During the meeting, both Schiccatano and Commissioner Joe Klebon praised everyone who helped to make the recent election go smoothly for the county.

“It was a unique election because of the COVID virus,” Schiccatano said. “We had a lot of extra (mail-in) ballots that had to be counted.”

Due to the virus, Schiccatano said some poll workers requested no to work this election, meaning the county had to find replacements.

Klebon noted that the county’s Elections Office had a turnover of employees prior to the primary. Director Tara Purcell resigned May 11, followed by the exit of office employees Jessica Harter and Robbie Kozar.

Schiccatano previously said Pat Nacy, who is from Snyder County and has 36 years of elections experience, was brought in to oversee the election. She worked side-by-side with Chief Clerk Maryrose McCarthy.

Both Klebon and Schiccatano visited a number of polling places on Election Day, from Watsontown to Mount Carmel.

“Everywhere we visited, there were very little or no problems,” Klebon said. “That’s a tribute to all the people that helped in this election.”

“It was one of the most rewarding elections that I was ever part of, because of the cooperation,” Schiccatano said.

The commissioners approved sending an honorary letter to Suzanne and Bob Starke, of Coal Township, in recognition of their 50th wedding anniversary.

The Ralpho Township Board of Supervisors meet Tuesday in the Elysburg gym. Township officials have met in the gym for several months as COVID-19 spread through the commonwealth, but will return to their meeting room for the next meeting, scheduled for Tuesday, July 14.

Linda Sterling, project coordinator of community development for SEDA-Council of Governments, explained that the money is funded through the federal CARES Act and administered by the U.S. Department of Housing and Urban Development (HUD).

She informed the board that $14,650 of the township’s share must be used for urgent needs and the remaining balance, $40,825, must benefit low- to moderate-income residents.

In regard to urgent needs, the board decided to spend $10,000 on two WiFi hot spots, one at the municipal building and another at Ralpho Township Community Park, for distance learning. The remaining $4,650 will be distributed to the police and fire departments.

The local food bank and fuel oil fund, which are overseen by the Elysburg Ministerium, will receive $5,000 each.

The Southern Columbia Area School District will be able to purchase approximately 40 devices for Ralpho Township students who receive free or reduced lunches through a donation of $10,000, according to the board.

The remaining balance, $20,825, will be given to Central Susquehanna Opportunities Inc., which provides support to individuals and families needing food, housing, utility or job-searching services.

The money is expected to be released to the township in October, Sterling said.

Supervisors also allocated its 2020 CDBG project funding, which will likely be distributed in July 2021. The total project funds to be received is $95,529, less $16,400 for administrative purposes.

The federal funds must improve the quality of life and meet one of three criteria: urgent need, elimination of blight and benefit low/moderate income families. The program requires 51% of the residents in a project service area to meet low/moderate income requirements.

Supervisors settled on $2,500 each to the food bank and fuel oil fund, and $74,129 for handicapped-accessible improvements to the municipal building.

In other business, the community’s playground and gym will reopen to the public on Saturday. Supervisors noted that part of their decision was based on Northumberland County moving into the green phase of Gov. Tom Wolf’s reopening plan on Friday.

Supervisor Blaine Madara Sr. voiced his support, stating, “I like to see the playground open so kids have something to do.”

The playground’s locks will be replaced with signage advising people to follow CDC guidelines. Similar signs are posted at the recycling center, which already opened to the public.

Approved sporting groups will now be able to use the gym. Chairman Steve Major noted that the township has received three requests to use the facility.

Supervisors, however, held off on reopening the township offices to walk-in business until at least the next month. When asked for her input, township secretary Debi Olson said she is mostly working from home, but everything has been running “smoothy.”

Roadmaster Howard Shadduck added, “We haven’t missed a beat with communication between departments.”

On the recommendation of police Chief Stu Appel, the board unanimously approved the hiring Brandon Cohick, Jonathan Rush and Patrick McAndrew as part-time police officers at a rate of $16.50 an hour.

Supervisors noted that the board’s next meeting on Tuesday, July 14, at 6:30 p.m. will be held in the meeting room. Township officials have met in the gym for several months as COVID-19 spread through the commonwealth. 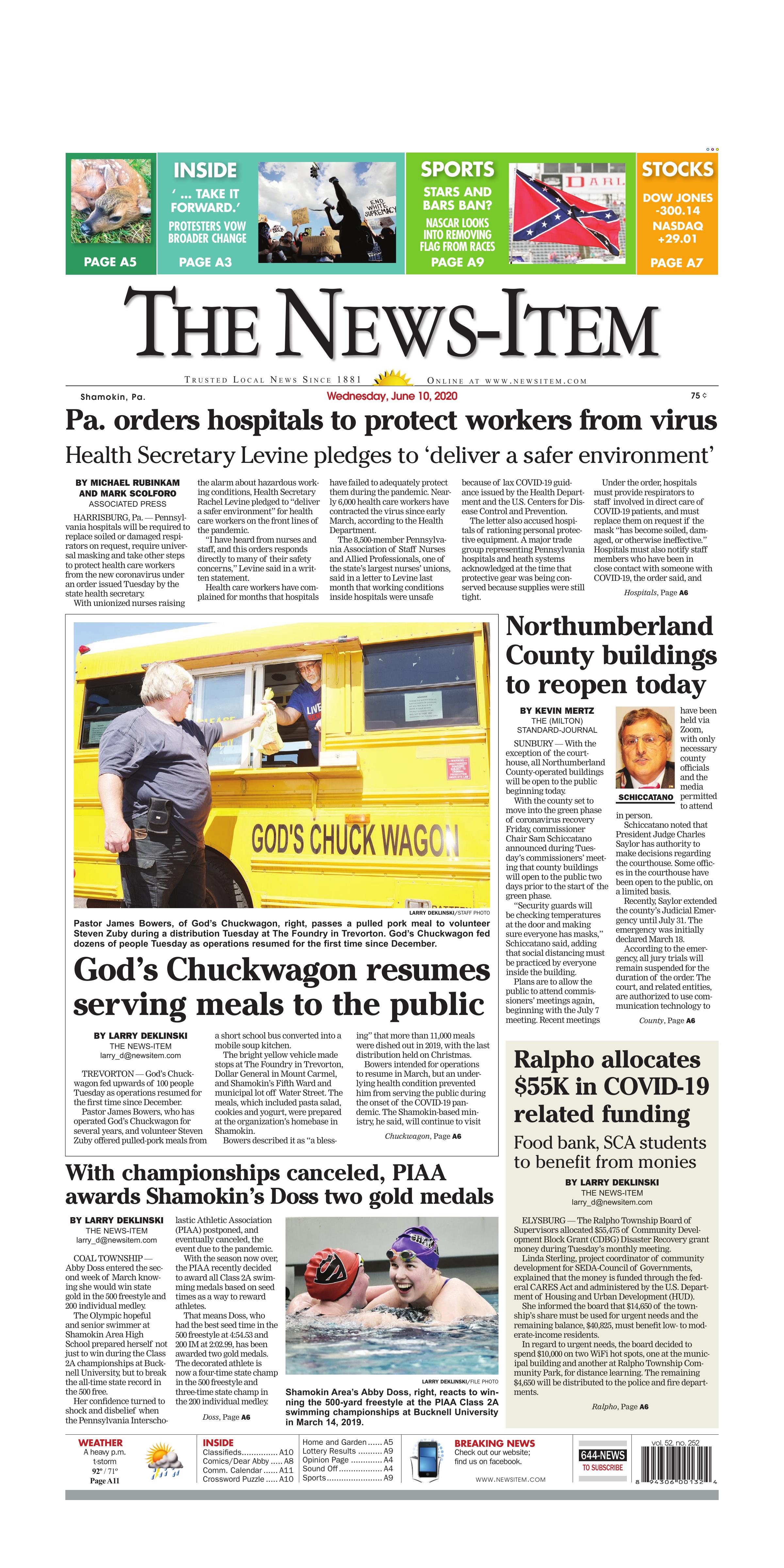