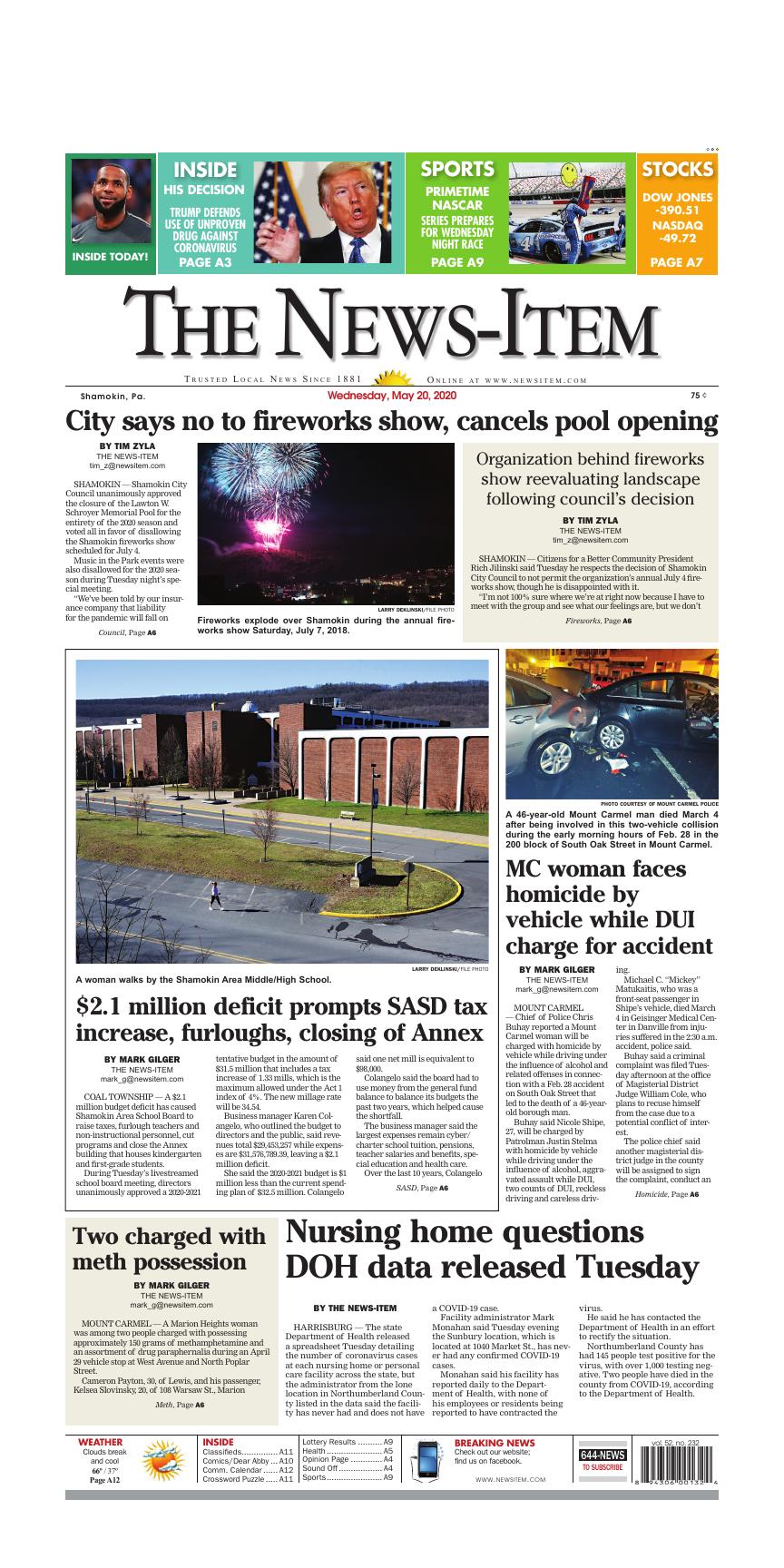 SHAMOKIN — Shamokin City Council unanimously approved the closure of the Lawton W. Schroyer Memorial Pool for the entirety of the 2020 season and voted all in favor of disallowing the Shamokin fireworks show scheduled for July 4.

Music in the Park events were also disallowed for the 2020 season during Tuesday night’s special meeting.

“We’ve been told by our insurance company that liability for the pandemic will fall on taxpayers,” Mayor John Brown said in explaining the moves.

Councilman Scott Roughton said, “Unfortunately, this is the way the ball is rolling and there’s not much we can do to save these events.”

The vote to disallow Citizens for a Better Community to hold its annual July 4 fireworks show from atop the Glen Burn came after no council member made a motion to specifically allow the event.

Brown then asked if any council members chose to make a motion to specifically not grant permission to the organization, to which Councilwoman Barb Moyer made a motion, seconded by Charlie Verano, prior to unanimous approval.

Councilwoman Jennifer Seidel said of the fireworks, “This (event) is our holiday. This is what we look forward to,” adding that the vote to disallow the event was “heartbreaking” and “devastating.”

Solicitor Vincent Rovito said the city had been put “on notice” from its insurance carrier about the council approving events to take place which could lead to people getting sick and the taxpayers facing potential liability.

“The taxpayers can’t afford to pay for this (holding events),” he said. “That’s the problem.”

A woman walks by the Shamokin Area Middle/High School.

During Tuesday’s livestreamed school board meeting, directors unanimously approved a 2020-2021 tentative budget in the amount of $31.5 million that includes a tax increase of 1.33 mills, which is the maximum allowed under the Act 1 index of 4%. The new millage rate will be 34.54.

Colangelo said the board had to use money from the general fund balance to balance its budgets the past two years, which helped cause the shortfall.

Over the last 10 years, Colangelo said the district has spent $11.8 million for cyber/charter school tuition.

She said the budget includes the following projected revenues:

Voting to approve the budget, which will be up for final adoption next month, were board President Brian Persing, Ed Griffiths, Charles Shuey, Melissa Hovenstine, Laura Scandle, Rosalie Smoogen, Bernie Sosnoskie, Jeff Kashner and Erik Anderson.

The board also unanimously approved the relocation of kindergarten and first-grade students from the Annex building to the elementary school, with the Annex being, at least temporarily, closed.

The elementary art and physical education classes will be taught by classroom and homeroom teachers to meet the requirements of Chapter 4 guidelines that are mandated in public schools.

The middle school alternative education program will be eliminated.

Armed security officer Keith Bonshock had his position eliminated and was transferred to hall monitor due his seniority.

When asked by The News-Item after the meeting why he voted against the cuts, Shuey said, “The cuts won’t balance the budget. I couldn’t agree with some of the cuts being made. They will have too great an impact on the educational program and the safety and security of the students. It seems like the cuts always seem to fall on the lower echelon employees. I think the cuts could be more equitable.”

He said the furloughs and program reductions have nothing to do with the coronavirus pandemic.

“We did save some money (due to the pandemic) obviously because we weren’t open,” he said. “But it’s minimal because we still provided meals to the students, had an educational program without a physical presence and still had to heat the buildings.”

He said most of the expenses had to do with paying teachers and essential personnel.

Shuey added, “What’s killing us are these cyber/charter schools. I’ve been harping about that since my first term on the board. I’m not opposed to the schools themselves, but the rate of reimbursement is insane. This year alone, they will cost us $2 million.”

The board approved a letter of agreement with Larson Design Group to oversee the turf replacement project at Kemp Memorial Stadium for a one-time cost of $3,900, retroactive to May 4.

HARRISBURG — The state Department of Health released a spreadsheet Tuesday detailing the number of coronavirus cases at each nursing home or personal care facility across the state, but the administrator from the lone location in Northumberland County listed in the data said the facility has never had and does not have a COVID-19 case.

Facility administrator Mark Monahan said Tuesday evening the Sunbury location, which is located at 1040 Market St., has never had any confirmed COVID-19 cases.

Monahan said his facility has reported daily to the Department of Health, with none of his employees or residents being reported to have contracted the virus.

He said he has contacted the Department of Health in an effort to rectify the situation.

Northumberland County has had 145 people test positive for the virus, with over 1,000 testing negative. Two people have died in the county from COVID-19, according to the Department of Health.

MOUNT CARMEL — A Marion Heights woman was among two people charged with possessing approximately 150 grams of methamphetamine and an assortment of drug paraphernalia during an April 29 vehicle stop at West Avenue and North Poplar Street.

Police said a blue sedan operated by Payton was reported stolen from Tennessee and Slovinsky was wanted on a warrant from the Northumberland County Sheriff’s Office. Payton told police he just purchased the vehicle for $1,200 from an unknown male in the Pottsville area.

A large crowd gathered along the Liberty Street Bridge near the Rescue Fire Company to take in the Shamokin fireworks display last year.

SHAMOKIN — Citizens for a Better Community President Rich Jilinski said Tuesday he respects the decision of Shamokin City Council to not permit the organization’s annual July 4 fireworks show, though he is disappointed with it.

“I’m not 100% sure where we’re at right now because I have to meet with the group and see what our feelings are, but we don’t want to go over what the politicians say. If they cancel it, they cancel it,” he said.

The fireworks show is shot from the Glen Burn in Coal Township, but Jilinski said he feels the event has always been a “joint-community effort” between the two municipalities.

“We sent the same letter to Coal Township asking for approval and we will see what their voices are. Until we hear from both entities (the show) is up in the air. Our plans were to go forward with it with caution and everybody social distancing and using common sense.”

Jilinski said he does not feel the cancellation of the fireworks show will completely solve the issue of people congregating for the Fourth of July.

Jilinski said fireworks for the 2020 show have already been purchased using last year’s fundraising money, and if the show is not held the group will look to find a storage facility and save them for 2021.

A 46-year-old Mount Carmel man died March 4 after being involved in this two-vehicle collision during the early morning hours of Feb. 28 in the 200 block of South Oak Street in Mount Carmel.

MOUNT CARMEL — Chief of Police Chris Buhay reported a Mount Carmel woman will be charged with homicide by vehicle while driving under the influence of alcohol and related offenses in connection with a Feb. 28 accident on South Oak Street that led to the death of a 46-year-old borough man.

Buhay said Nicole Shipe, 27, will be charged by Patrolman Justin Stelma with homicide by vehicle while driving under the influence of alcohol, aggravated assault while DUI, two counts of DUI, reckless driving and careless driving.

Michael C. “Mickey” Matukaitis, who was a front-seat passenger in Shipe’s vehicle, died March 4 in Geisinger Medical Center in Danville from injuries suffered in the 2:30 a.m. accident, police said.

Buhay said a criminal complaint was filed Tuesday afternoon at the office of Magisterial District Judge William Cole, who plans to recuse himself from the case due to a potential conflict of interest.

The police chief said another magisterial district judge in the county will be assigned to sign the complaint, conduct an arraignment and preliminary hearing.

Police said the passenger side of a black car operated by Shipe struck an unoccupied parked automobile in the 200 block of South Oak Street. 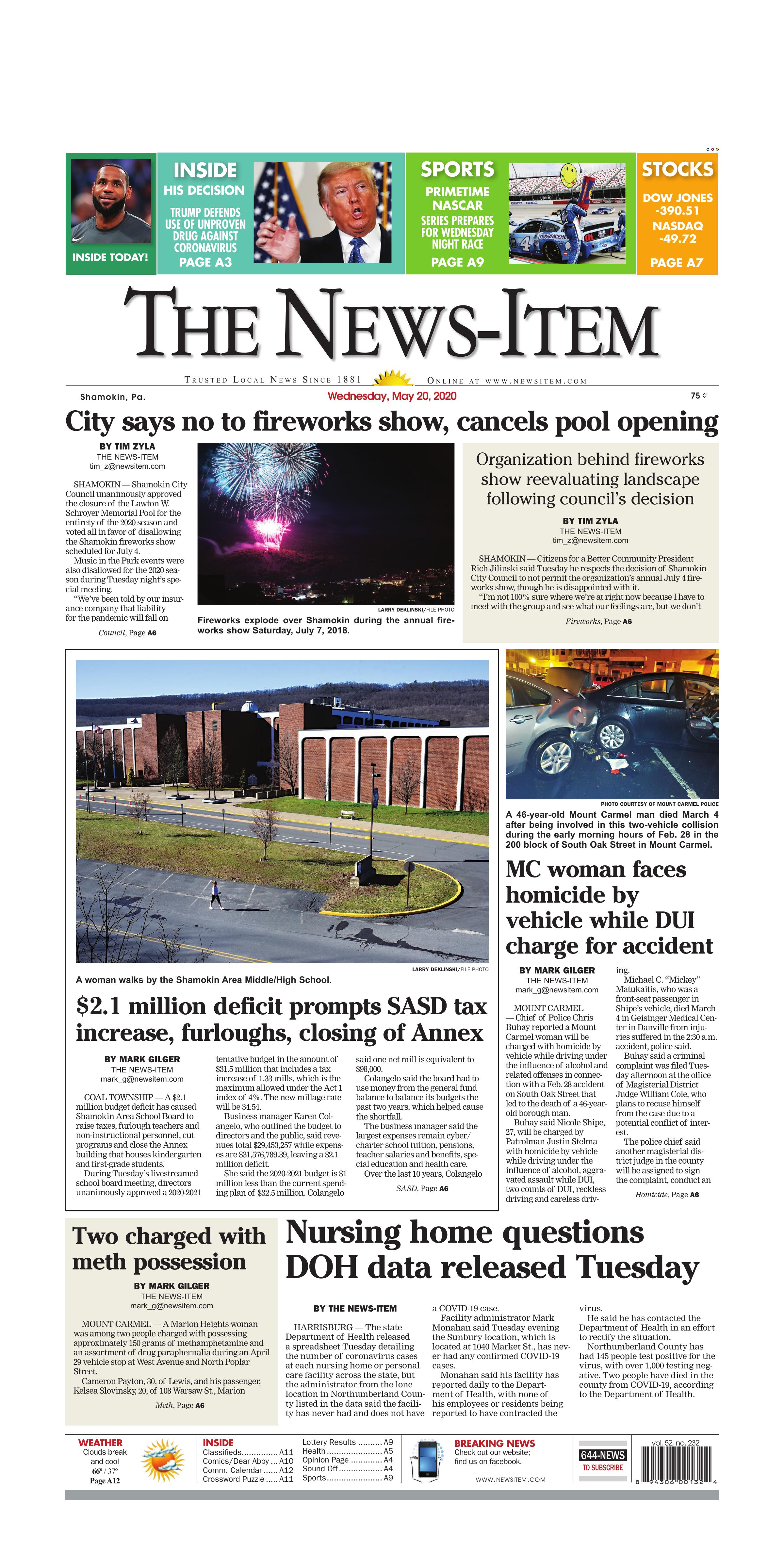