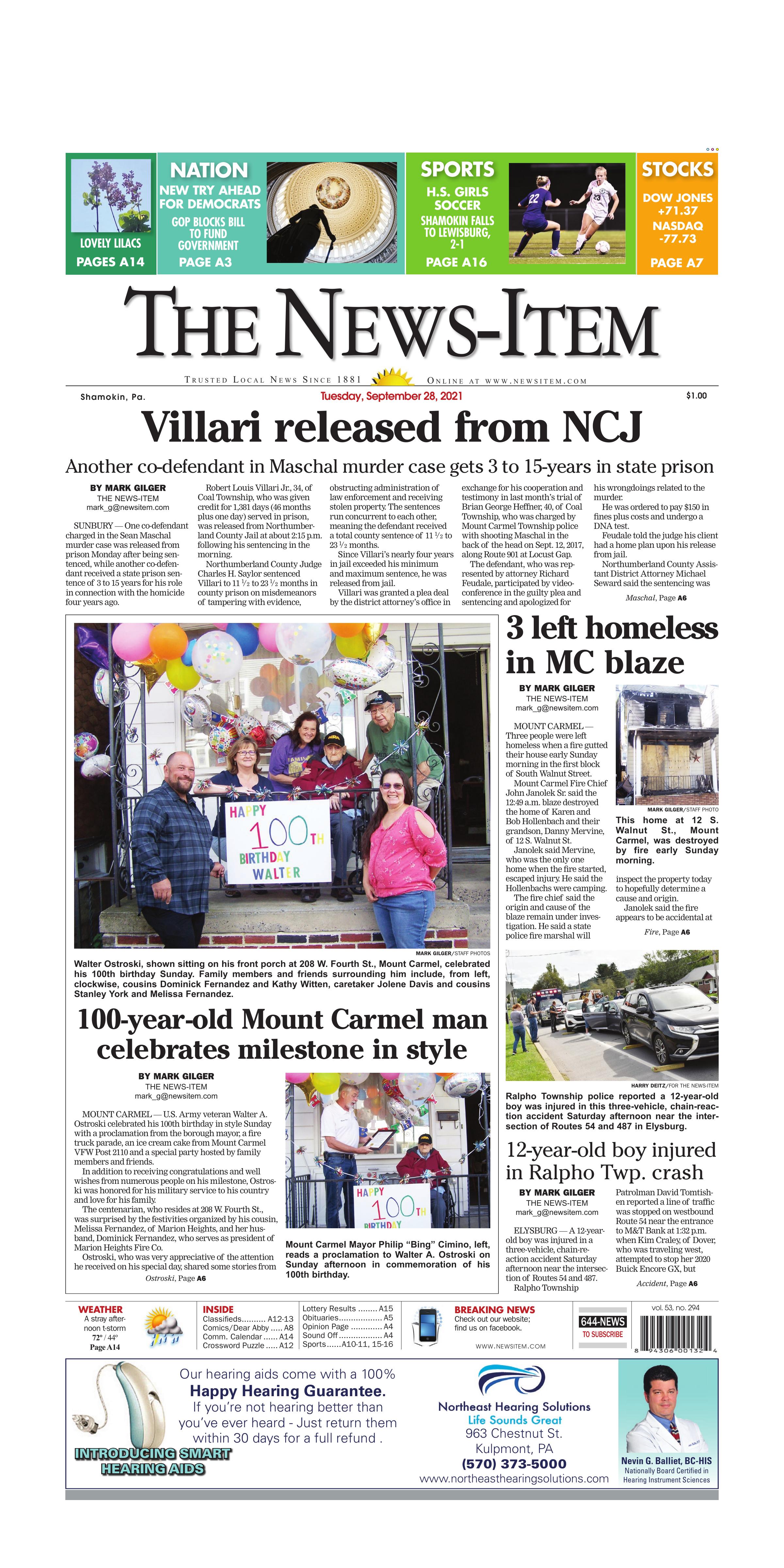 The Rotunda of the U.S. Capitol is seen as a consequential week begins for President Joe Biden's agenda and Democratic leaders in Congress who are trying to advance his $3.5 trillion "Build Back Better" package and pass legislation to avoid a federal shutdown, in Washington, Monday, Sept. 27, 2021. (AP Photo/J. Scott Applewhite)

SUNBURY — One co-defendant charged in the Sean Maschal murder case was released from prison Monday after being sentenced, while another co-defendant received a state prison sentence of 3 to 15 years for his role in connection with the homicide four years ago.

Robert Louis Villari Jr., 34, of Coal Township, who was given credit for 1,381 days (46 months plus one day) served in prison, was released from Northumberland County Jail at about 2:15 p.m. following his sentencing in the morning.

Northumberland County Judge Charles H. Saylor sentenced Villari to 11 1/2 to 23 1/2 months in county prison on misdemeanors of tampering with evidence, obstructing administration of law enforcement and receiving stolen property. The sentences run concurrent to each other, meaning the defendant received a total county sentence of 11 1/2 to 23 1/2 months.

Since Villari’s nearly four years in jail exceeded his minimum and maximum sentence, he was released from jail.

Villari was granted a plea deal by the district attorney’s office in exchange for his cooperation and testimony in last month’s trial of Brian George Heffner, 40, of Coal Township, who was charged by Mount Carmel Township police with shooting Maschal in the back of the head on Sept. 12, 2017, along Route 901 at Locust Gap.

The defendant, who was represented by attorney Richard Feudale, participated by videoconference in the guilty plea and sentencing and apologized for his wrongdoings related to the murder.

He was ordered to pay $150 in fines plus costs and undergo a DNA test.

Feudale told the judge his client had a home plan upon his release from jail.

Villari was accused of stealing a handgun belonging to Michael McIntyre, of Ashland, but Seward said the gun owner didn’t seek restitution from Villari in the Northumberland County case. The gun, which was allegedly used in the shooting death of Maschal, was stolen in Ashland, which is located in Schuylkill County.

David Matthew Brown, 37, of Ashland, another co-defendant in the murder case, wasn’t as fortunate as Villari, even though he also cooperated with police and the district attorney’s office and testified against Heffner.

Brown, who participated by video conference from SCI-Camp Hill, where he is incarcerated on unrelated offenses, was sentenced at 2 p.m. by Saylor to 3 to 15 years in state prison.

Brown was not given any credit for his time served in prison.

Brown apologized to Maschal’s family for the tragic shooting death. “Nothing I can say or do will bring Sean back,” he said. “I should have done more. He was a good friend. I’m not asking for forgiveness. I’m deeply sorry.”

His attorney, Kate Lincoln, who pointed out her client’s cooperation and willingness to testify against Heffner, said Brown has shown remorse for his conduct and is willing to accept responsibility for his actions.

She requested a mitigating range sentence and for Brown to receive a concurrent sentence to one he is still serving for a DUI and drug charges in Schuylkill County.

Seward told the court Brown provided police investigators with significant information about the circumstances surrounding Maschal’s death. He said Brown’s cooperation with police led directly to the apprehension and conviction of Heffner.

The assistant district attorney said Brown identified the persons involved, where they went and what they did on the days surrounding Maschal’s death.

He said Brown has fulfilled his end of the plea agreement. He asked the judge to take into consideration Brown’s assistance in the investigation as having a mitigating effect on the consequences of his actions.

Just before imposing sentence, Saylor rejected Lincoln’s request for a mitigating range sentence and imposed a penalty at the top of the standard range.

The judge said he found the three defendants’ actions “appalling,” especially after the shooting. Saylor said the defendants took Maschal’s property before going on their “merry way to finalize a drug transaction with a total disregard for Maschal’s body.”

Prior to sentencing, Maschal’s brother, Michael Maschal, of Mount Carmel, addressed the court.

He stated, “Throughout the last four years since my brother was killed, my life has been a roller coaster of emotions — from hate, anger, sadness, guilt, empathy and sympathy — just to name a few. The list is endless.”

Maschal told Saylor, “Your honor, I understand and respect law and I understand that sometimes the law doesn’t always go the route victims want it to go. Even though I didn’t like it, I understand this plea deal was offered in hopes to try to get a murder conviction for justice for me, Sean’s young daughter, my family and all the people who loved my brother unconditionally.”

He added, “I firmly believe you have the power to not only serve justice, but to prevent these types of crimes from happening in the first place. While I respect your decision no matter what that may be, I can’t help but think that anything less than the maximum sentence for all involved in this case would be a slap on the wrist, and leaves the door open for anyone else who decides to partake in drugs and crime.”

Maschal concluded, “What’s done is done. My brother is never coming back. But if we don’t use the past to shape the future, especially in the court of law, is justice ever being served?”

Feudale, Lincoln and Seward all declined comment after the sentencings.

Heffner was found guilty Aug. 19 by a jury of a misdemeanor of involuntary manslaughter and multiple other charges in connection with the shooting death of the 33-year-old Maschal, of Mount Carmel, whom he described as his “best friend.”

He is scheduled to be sentenced at 11 a.m. Friday by Saylor.

Heffner, who was charged by Mount Carmel Township Patrolman Michael Pitcavage with shooting Maschal in the head while allegedly high on bath salts, was acquitted of the most serious charge of third-degree murder.

A jury comprised of nine women and three men deliberated for approximately two hours before rendering its verdicts on 10 criminal charges, including five felonies.

In addition to involuntary manslaughter, the jury found Heffner guilty of felonies of possessing a firearm while being a convicted felon, criminal conspiracy to commit receiving stolen property, receiving stolen property, possessing a firearm without a license and aiding consummation of a crime, and misdemeanors of recklessly endangering, abuse of a corpse and tampering with evidence.

The jury also acquitted Heffner of a felony of theft by unlawful taking.

A total of 14 criminal charges, including an open count of criminal homicide, were filed against Heffner.

Saylor dismissed felonies of robbery, aggravated assault (two counts) and criminal conspiracy to commit robbery due to lack of evidence. The judge also ruled that first-degree murder, second-degree murder and voluntary manslaughter that are included in an open count of criminal homicide were not applicable in the case. 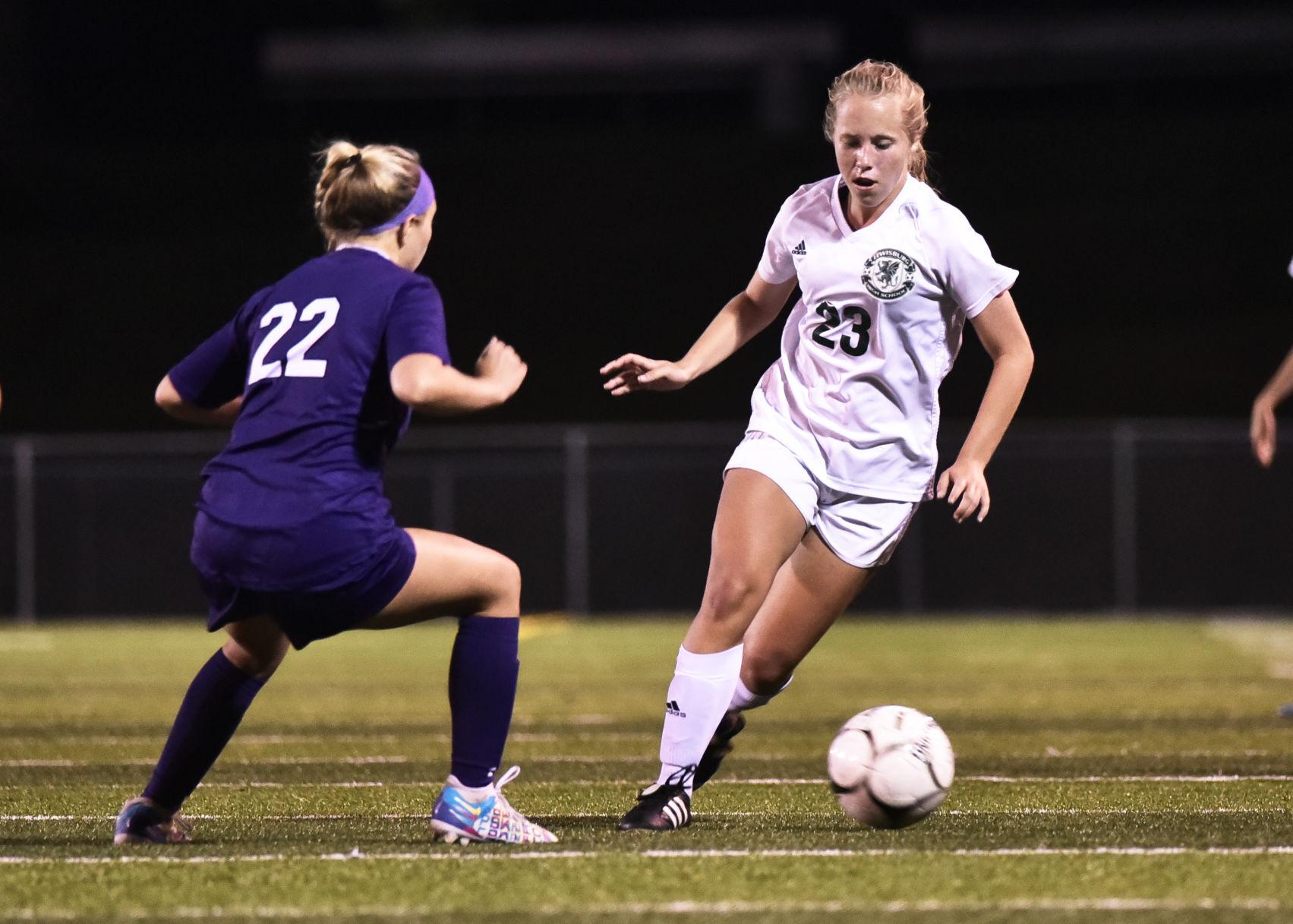 Lewisburg’s Sophie Kilbride moves the ball around Shamokin’s Gabrielle Rapp in the first half of play Monday night at Kemp Memorial Stadium in Coal Township.

Kathy Gonsar and Joe Rocuskie were pleasantly surprised to find lilacs on Sept. 11 blooming in their yard at the corner of Orange and Dewart streets in Shamokin. Normally, the lilacs only bloom in the spring.