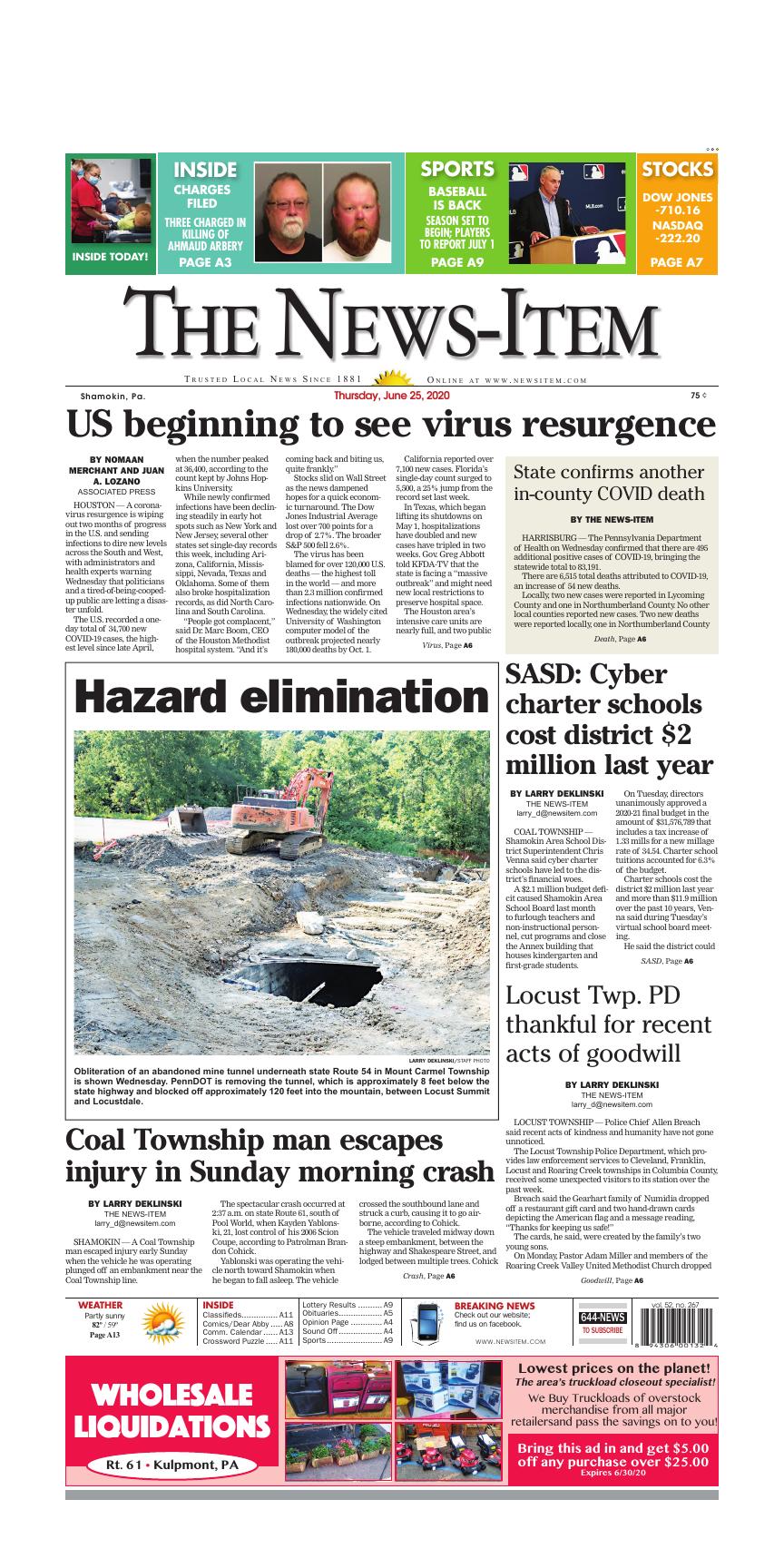 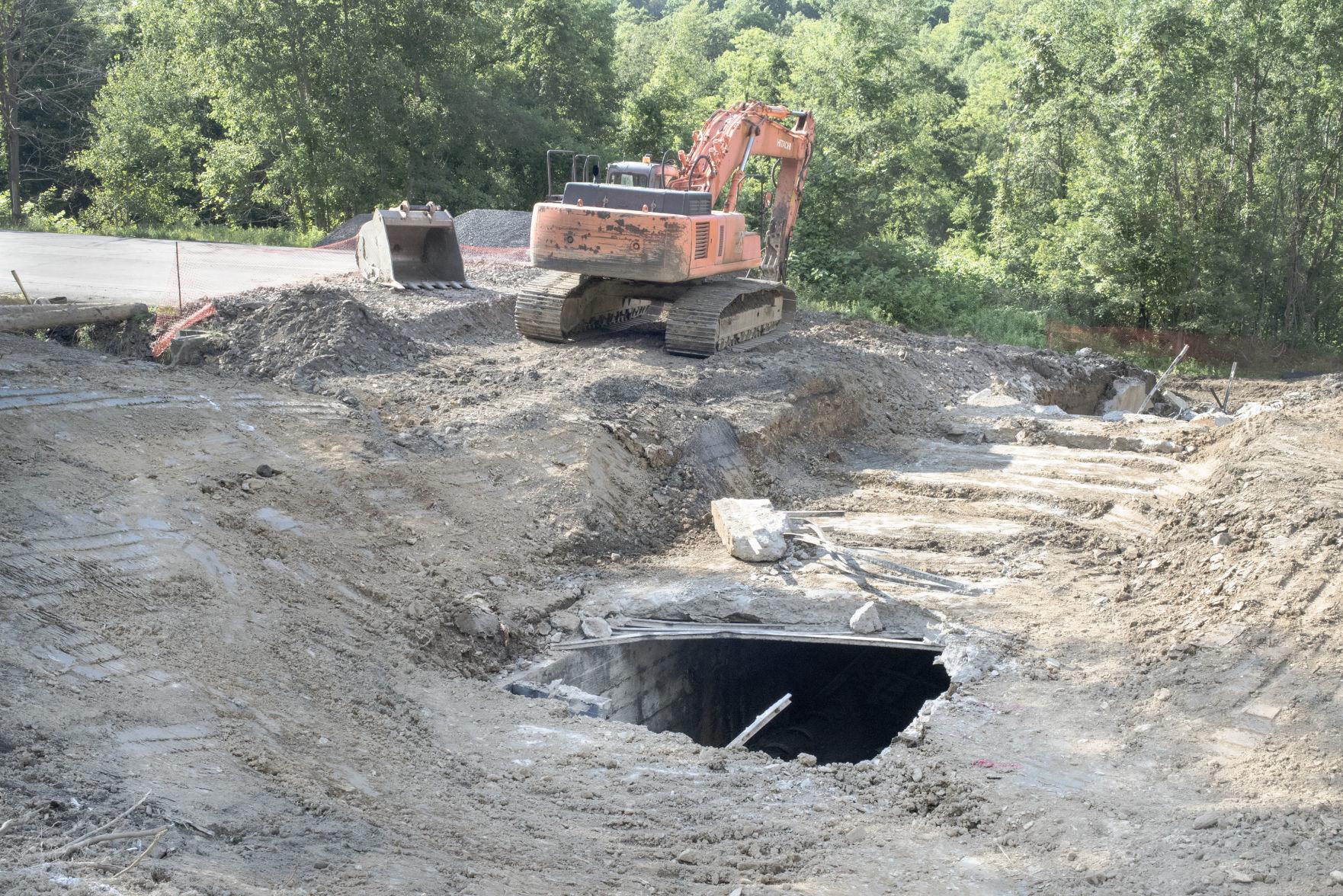 Obliteration of an abandoned mine tunnel underneath state Route 54 in Mount Carmel Township is shown Wednesday. PennDOT is removing the tunnel, which is approximately 8 feet below the state highway and blocked off approximately 120 feet into the mountain, between Locust Summit and Locustdale.

A 2006 Scion Coupe is lifted out of a steep embankment along state Route 61 near Pool World in Shamokin Sunday morning. The driver was uninjured, despite the vehicle going airborne and lodging between several trees.

SHAMOKIN — A Coal Township man escaped injury early Sunday when the vehicle he was operating plunged off an embankment near the Coal Township line.

The spectacular crash occurred at 2:37 a.m. on state Route 61, south of Pool World, when Kayden Yablonski, 21, lost control of his 2006 Scion Coupe, according to Patrolman Brandon Cohick.

Yablonski was operating the vehicle north toward Shamokin when he began to fall asleep. The vehicle crossed the southbound lane and struck a curb, causing it to go airborne, according to Cohick.

The vehicle traveled midway down a steep embankment, between the highway and Shakespeare Street, and lodged between multiple trees. Cohick said he and Patrolman James Filko made contact with the driver, who eventually refused medical transportation.

Aurand’s Towing in Sunbury used a heavy-duty wrecker to lift the vehicle out of the heavily-wooded embankment and back onto the highway.

The crash remains under investigation.

Local
State confirms another in-county COVID death
By THE NEWS-ITEM
06.24.20

HARRISBURG — The Pennsylvania Department of Health on Wednesday confirmed that there are 495 additional positive cases of COVID-19, bringing the statewide total to 83,191.

In nursing and personal care homes, there are 17,394 resident cases of COVID-19, and 3,103 cases among employees, for a total of 20,497 at 671 distinct facilities in 49 counties. Of total deaths, 4,467 have occurred in residents from nursing or personal care facilities.

Approximately 6,303 of total cases are in health care workers.

Charter schools cost the district $2 million last year and more than $11.9 million over the past 10 years, Venna said during Tuesday’s virtual school board meeting.

He said the district could have avoided the “significant and very difficult” decisions last month if not for the growing charter school tuition costs.

Venna presented information from pacharterchange.org, which states that total charter school tuition payments, both cyber and brick-and-mortar, were more than $2 billion during the 2018-19 school year. Nearly $606 million of that total was tuition to cyber charter schools, which is $112 million more than what school districts spent on all student activities such as athletics and extracurriculars.

In Pennsylvania, there were 165 brick-and-mortar charter schools and 15 cyber schools consisting of 137,000 students during the 2018-19 school year.

Director Jeff Kashner said it is “ridiculous” that cyber charter schools throughout the state are eligible for COVID-19 CARES funds that are also shared by school districts.

Kashner questioned who sits on cyber charter school boards and their possible connections to state legislators.

Board President Brian Persing said the district offers its own cyber school and can operate it at a lower cost than cyber charter schools. He added that the district has reached out to parents of students in an attempt to have them join Shamokin Area.

“For every 10 kids we get back that’s $100,000 dollars,” Persing said of regular education students.

Venna encouraged cyber-charter reform that would require the parent of a student to foot the bill for education, if their child attended a charter school and not their respective district’s own cyber program. He urged residents to contact legislators and ask for reform.

“We simply cannot keep up with these growing costs and be forced to raise taxes and cut programs and services for our own students in order to pay millions of dollars to cyber charter schools,” Venna said. “Something needs to be done. The $12 million we spent over the past 10 years … Imagine if those dollars were still in our district.”

In other business, the board approved by majority decision to adjust employment status for Heather Fernandez and Jessica Portzline to reflect eight hours per day 260 days per year with a salary adjustment to reflect a $3 an hour increase.

Directors Erik Anderson and Rosalie Smoogen voted against the changes, stating they felt the increases were too high. Voting in favor were Persing, Kashner, Edward Griffiths, Laura Scandle, Charles Shuey and Bernard Sosnoskie.

Anderson also voted against Tina Barnabe’s job classification being changed to confidential employee, with a salary adjustment to reflect a $3 an hour increase for similar reasons.

Shuey voted against Sam Schicchitano as assistant football coach at a salary of $3,042, but approved the remaining coaches for football and all other fall sports. He did not state a reason for his dissension.

The board unanimously approved:

• The Athletic Department guidelines for reopening sports and extracurricular activities. The plan is very similar to what neighboring districts have also adopted.

Shown is a hand-drawn card created by the Gearhart family of Numidia that was given to the Locust Township Police Department. Chief Allen Breach said recent acts of kindness and humanity are needed and appreciated.

Shown is a hand-drawn card created by the Gearhart family of Numidia that was given to the Locust Township Police Department. Chief Allen Breach said recent acts of kindness and humanity are needed and appreciated.

The Locust Township Police Department, which provides law enforcement services to Cleveland, Franklin, Locust and Roaring Creek townships in Columbia County, received some unexpected visitors to its station over the past week.

Breach said the Gearhart family of Numidia dropped off a restaurant gift card and two hand-drawn cards depicting the American flag and a message reading, “Thanks for keeping us safe!”

The cards, he said, were created by the family’s two young sons.

On Monday, Pastor Adam Miller and members of the Roaring Creek Valley United Methodist Church dropped off a slew of pizzas for officers to enjoy.

“It’s welcomed and needed at this point. Police officers feel the stress with the pandemic and the national situation,” Breach said Wednesday. “We are blessed to live in such a great community that has such great support and respect.”

The department currently consists of Breach, who has been the township’s chief for more than 10 years, and four part-time officers.

Breach said barely a day goes by that residents and business owners don’t ask about an officer’s welfare, adding that the public’s generosity has not been limited to times of national crisis or emergency.

He said the support and condolences were nothing short of amazing after losing his brother Shane in a motor vehicle crash on state Route 487 in Franklin Township on Dec. 23, 2015.

Breach said departments throughout the region experience similar acts of goodwill from their residents and people passing through.

“People in the community have been letting us know that they value our presence and service to the community,” Breach said. “We are so blessed to work in such an amazing community.” 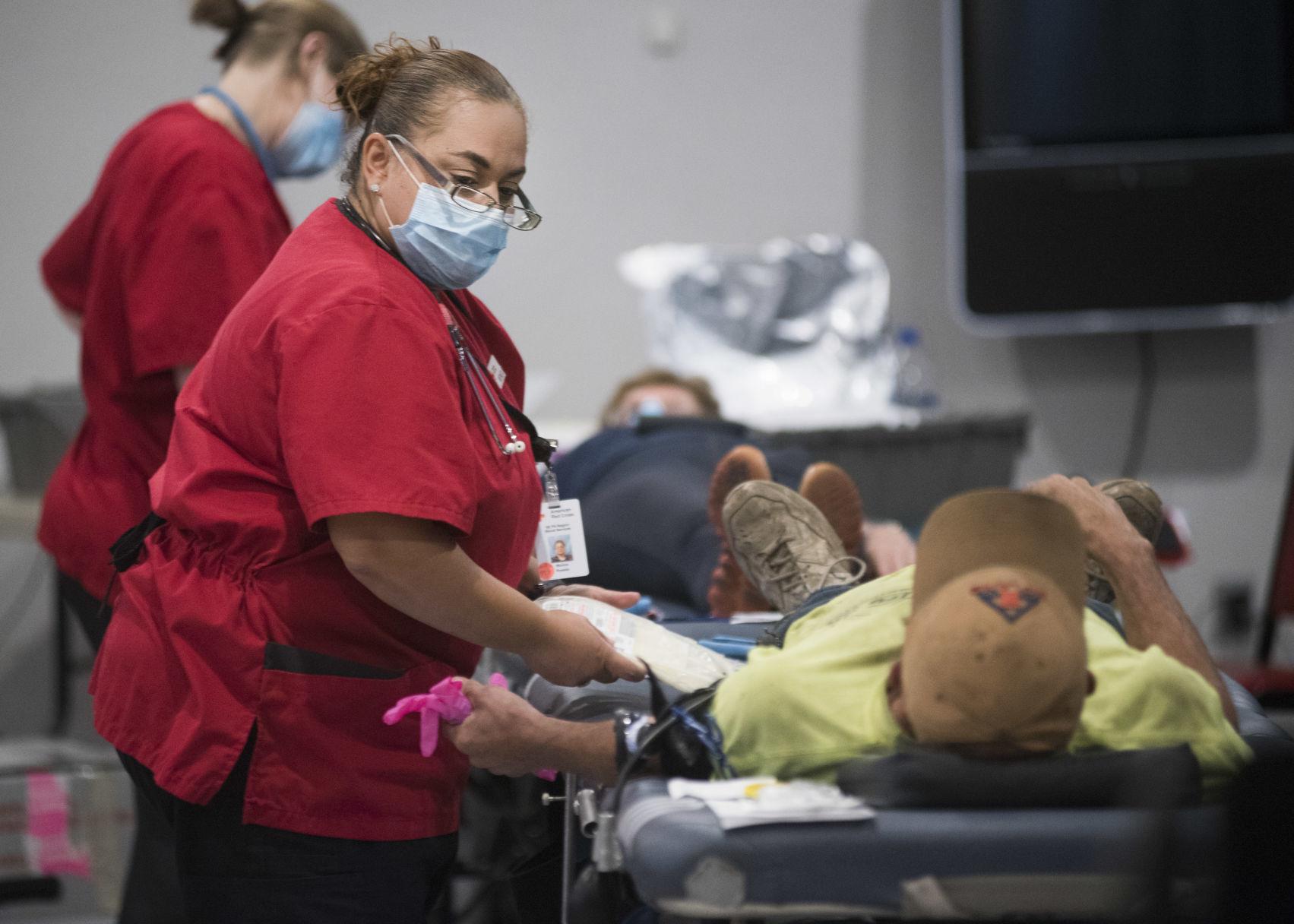 Members of the American Red Cross work with patients during a blood drive Tuesday at the Knights of Columbus banquet hall in Shamokin. The next local drive, according to the Red Cross, will be held 1 to 6 p.m. Tuesday, July 7, at the Queen of the Most Holy Rosary Church in Elysburg. 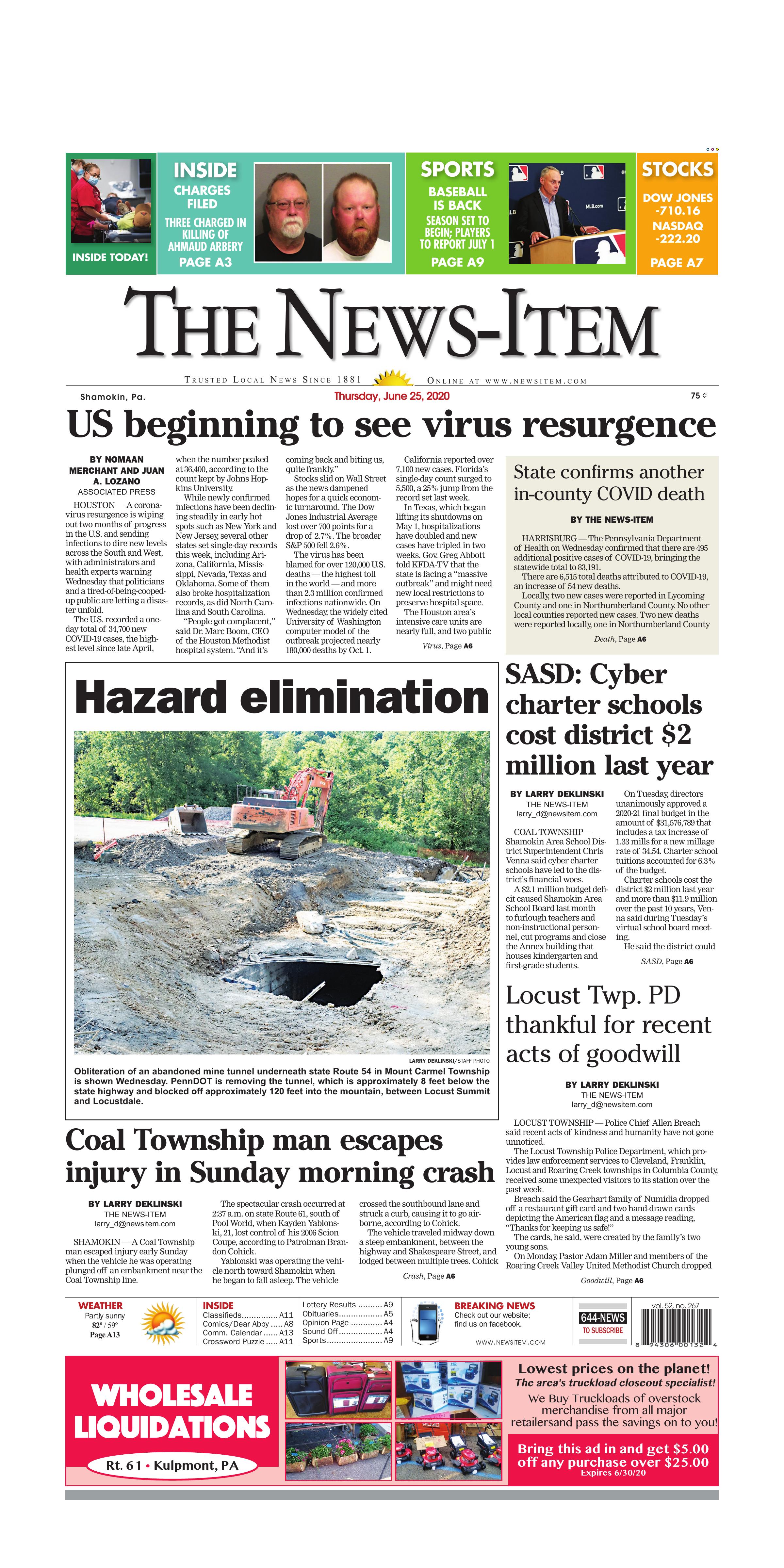