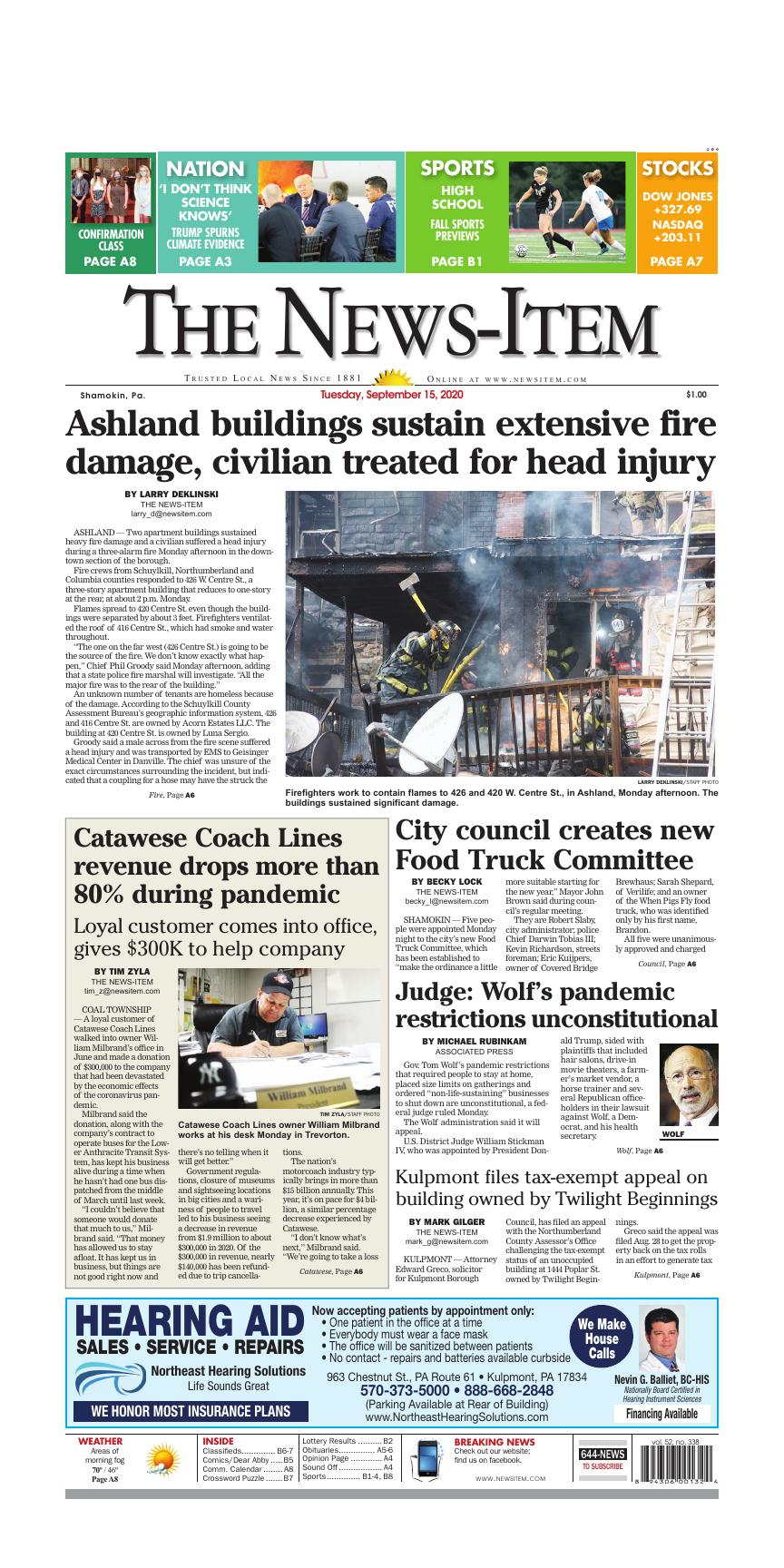 ASHLAND — Two apartment buildings sustained heavy fire damage and a civilian suffered a head injury during a three-alarm fire Monday afternoon in the downtown section of the borough.

Fire crews from Schuylkill, Northumberland and Columbia counties responded to 426 W. Centre St., a three-story apartment building that reduces to one-story at the rear, at about 2 p.m. Monday.

Flames spread to 420 Centre St. even though the buildings were separated by about 3 feet. Firefighters ventilated the roof of 416 Centre St., which had smoke and water throughout.

“The one on the far west (426 Centre St.) is going to be the source of the fire. We don’t know exactly what happen,” Chief Phil Groody said Monday afternoon, adding that a state police fire marshal will investigate. “All the major fire was to the rear of the building.”

An unknown number of tenants are homeless because of the damage. According to the Schuylkill County Assessment Bureau’s geographic information system, 426 and 416 Centre St. are owned by Acorn Estates LLC. The building at 420 Centre St. is owned by Sergio Luna.

Groody said a male across from the fire scene suffered a head injury and was transported by EMS to Geisinger Medical Center in Danville. The chief was unsure of the exact circumstances surrounding the incident, but indicated that a coupling for a hose may have struck the man.

The address reported during initial dispatch was 420 Middle St., a single home in an alley where a 911 call was placed, but was quickly updated upon the arrival of first responders. The change in location brought a heightened concern to Groody, who lives at 404-406 Centre St., just a few doors away from the burning structures.

Firefighters were able to spare the remainder of the block by halting the flames at 420 Centre St. For more than two hours they used multiple hand lines at the rear of the buildings and ladder trucks from Mount Carmel, Mahanoy City, Ashland and Shenandoah positioned on Centre Street. By 4 p.m. crews were pulling away material to search for hot spots.

“I was at home when the call first came in. When I crested the top of the town, we had heavy smoke,” said Charlie Orth, chief 38-01, who had command of the front of the burning structures. “So, once I got on scene I called for the second alarm.”

Chris Groody, chief 38-02, took command of operations at the back of the homes. Phil Groody shared command after arriving from the Schuylkill Haven area.

“They work hard. We are very thankful for the massive mutual-aid response,” Phil Groody said of firefighters who responded from as far away as Kulpmont and Pottsville. “For this time of day, (the response) was excellent.”

COAL TOWNSHIP — A loyal customer of Catawese Coach Lines walked into owner William Milbrand’s office in June and made a donation of $300,000 to the company that had been devastated by the economic effects of the coronavirus pandemic.

Milbrand said the donation, along with the company’s contract to operate buses for the Lower Anthracite Transit System, has kept his business alive during a time when he hasn’t had one bus dispatched from the middle of March until last week.

“I couldn’t believe that someone would donate that much to us,” Milbrand said. “That money has allowed us to stay afloat. It has kept us in business, but things are not good right now and there’s no telling when it will get better.”

Government regulations, closure of museums and sightseeing locations in big cities and a wariness of people to travel led to his business seeing a decrease in revenue from $1.9 million to about $300,000 in 2020. Of the $300,000 in revenue, nearly $140,000 has been refunded due to trip cancellations.

The nation’s motorcoach industry typically brings in more than $15 billion annually. This year, it’s on pace for $4 billion, a similar percentage decrease experienced by Catawese.

“I don’t know what’s next,” Milbrand said. “We’re going to take a loss this year and I don’t know how long it can go on for.”

To make matters worse, Milbrand said his insurance rates for the year have gone from $161,000 in 2019, to about $400,000 for 2020. He attributed the increase to what he described as insurance companies looking to increase revenue after the vast majority of bus companies dropped policies during the height of the pandemic.

Now, as he is operating some trips at a loss due to the circumstances in an attempt to retain customers, Milbrand said Catawese is making a push to increase its reach to customers.

“We’re trying to make a push here,” he said. “Things are starting to open up — we do have some venues and trips scheduled — and we’re hoping to slowly starting climbing out of this.”

Milbrand said he is not surprised by the federal government’s inaction on helping the motorcoach industry, despite $25 billion being doled out to airlines in April.

“We received some payroll protection program money,” he said. “We were eligible just like every other business.”

Catawese will not be required to pay those loans back, as was part of the program, but Milbrand said the effect of the money was merely a drop in the bucket compared to what is needed to be profitable.

In spite of financial issues, Milbrand said he has “tried to do the right thing.”

He said he retained his two office employees and two mechanics throughout the spring and summer, aside from a one-week layoff back in March.

One of those employees, Karen Mease, said demand remains for the bus trips to casinos that the company used to run, although Pennsylvania casinos have yet to begin accepting buses, a measure that was put in place due to the pandemic.

“I get calls asking ‘When will the casino trips start back up?’” and we don’t know what to say,” Mease explained. “It’s out of our hands.”

Mease said many of the private charters that the company used to operate for events such as bachelor parties and weddings have almost completely disappeared.

Milbrand said he is hoping the fall brings an increase in trips and a decrease in events being canceled, adding that the autumn season is the company’s second busiest, next to spring. 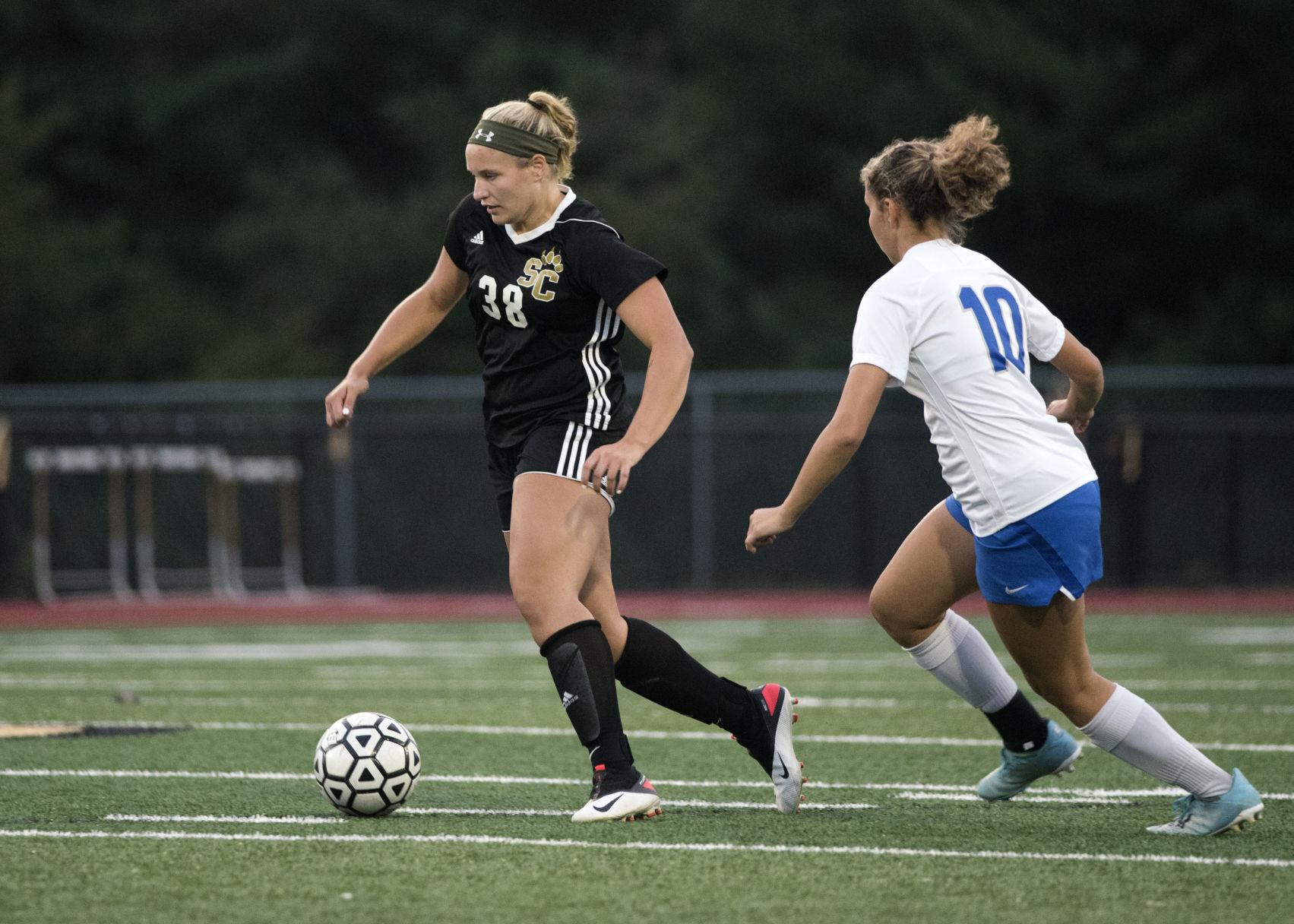 SHAMOKIN — Five people were appointed Monday night to the city’s new Food Truck Committee, which has been established to “make the ordinance a little more suitable starting for the new year,” Mayor John Brown said during council’s regular meeting.

They are Robert Slaby, city administrator; police Chief Darwin Tobias III; Kevin Richardson, streets foreman; Eric Kuijpers, owner of Covered Bridge Brewhaus; Sarah Shepard, of Verilife; and an owner of the When Pigs Fly food truck, who was identified only by his first name, Brandon.

All five were unanimously approved and charged with setting up a meeting as soon as possible.

Also approved unanimously was a request to extend for an additional 90 days the mayor’s executive order regarding outdoor seating.

Council tabled a letter written by Kathy Vetovich, president of SABER, and Go Shamokin, requesting permission to hold a Home for the Holidays Christmas event on the city’s downtown streets during the afternoon and evening hours of Nov. 28. The event would require closing streets to vehicular traffic and allowing vendors to set up tents in municipal and business parking lots and on sidewalks.

In addition, the groups requested permission to decorate monuments along Market Street with holiday lights that would be illuminated through the Christmas season and to close that street for a few hours.

However, closing a state highway would require permission from the state Department of Transportation, council said, and opted to table the request until a later date.

In an agenda item labeled unfinished business, council reinstated the Shamokin Area Industrial Development Board, which “has been stagnant for a little while,” Brown said.

“Back in the day when things were happening, it was an active board,” he said. “We’ve been asked to renew the board.”

Each of the five members of the board serve for five-year terms.

Brown requested that Edward Manning fill the first seat “and hopefully the chair of the board.”

Greco said the appeal was filed Aug. 28 to get the property back on the tax rolls in an effort to generate tax revenue for the borough, Mount Carmel Area School District and Northumberland County.

He said the borough has been spending money on resources to inspect alleged code violations at the building.

Twilight Beginnings, of Mount Carmel, formerly owned and operated by Joan Cicchiello, is among approximately 60 properties that are scheduled for property assessment appeal hearings in the county next month.

Twilight Beginnings was given tax-exempt status in 2012.

Cicchiello was charged by the U.S. Attorney’s Office for the Middle District of Pennsylvania with operating an illegal psychotherapy business out of an abandoned church and vacationing around the world while falsely billing the federal government for mental health care services performed by fake therapists.

Cicchiello, 69, formerly of Mount Carmel, was sentenced by Judge John E. Jones II in May 2018 to serve six years in a federal prison followed by three years of supervised probation. She also was ordered to repay $152,122 to Medicare and fined $150,000. An unspecified amount of money belonging to Cicchiello was seized during the investigation.

Cicchiello, a former registered nurse, pleaded guilty to health care fraud in October 2017. As part of the plea deal, 37 counts of making false statements related to health care matters and one count of obstruction of a federal audit were withdrawn.

A grand jury returned an indictment against her in September 2015. She remains a federal inmate at a Residential Re-entry Management Field Office in Philadelphia. 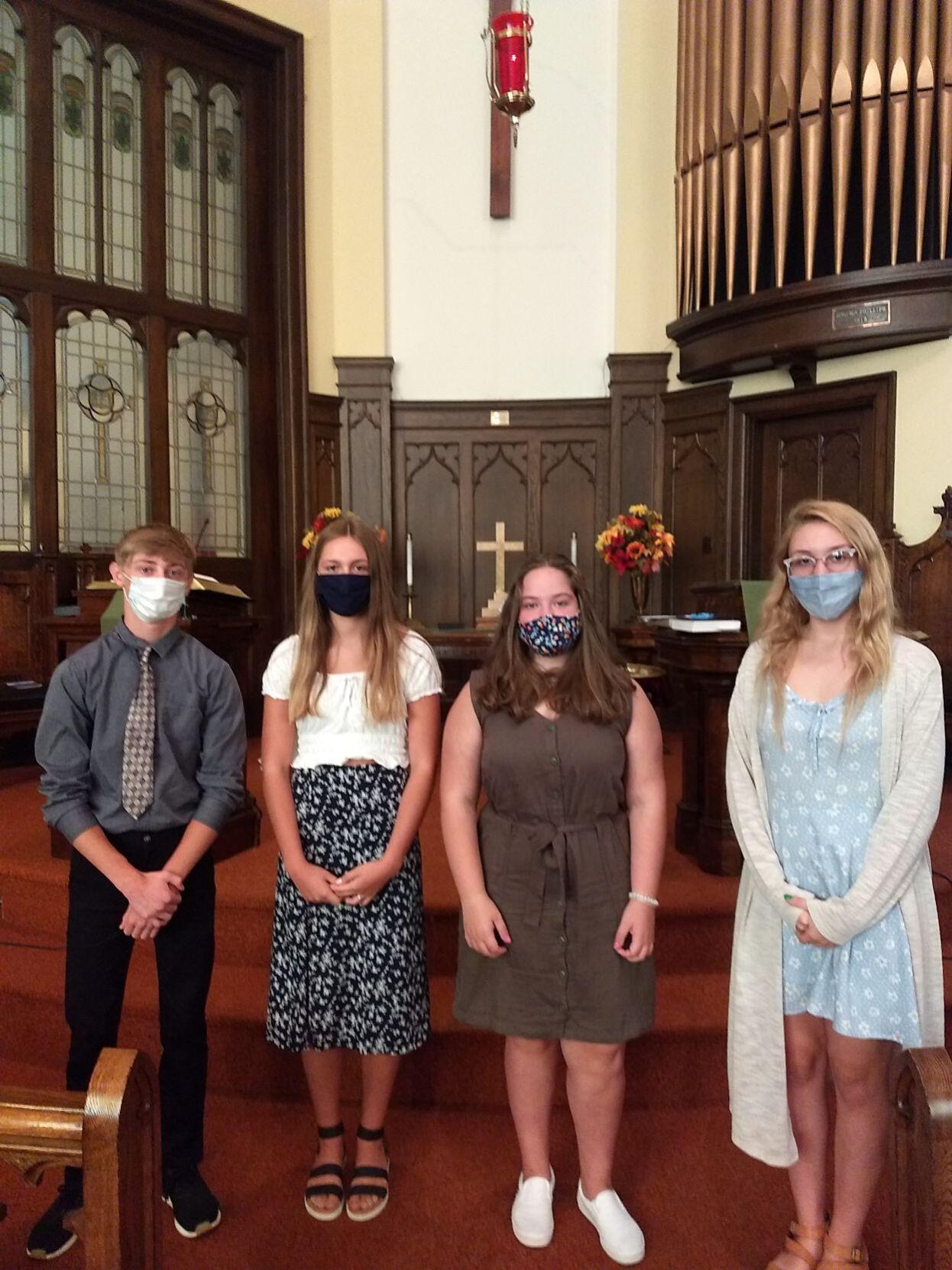 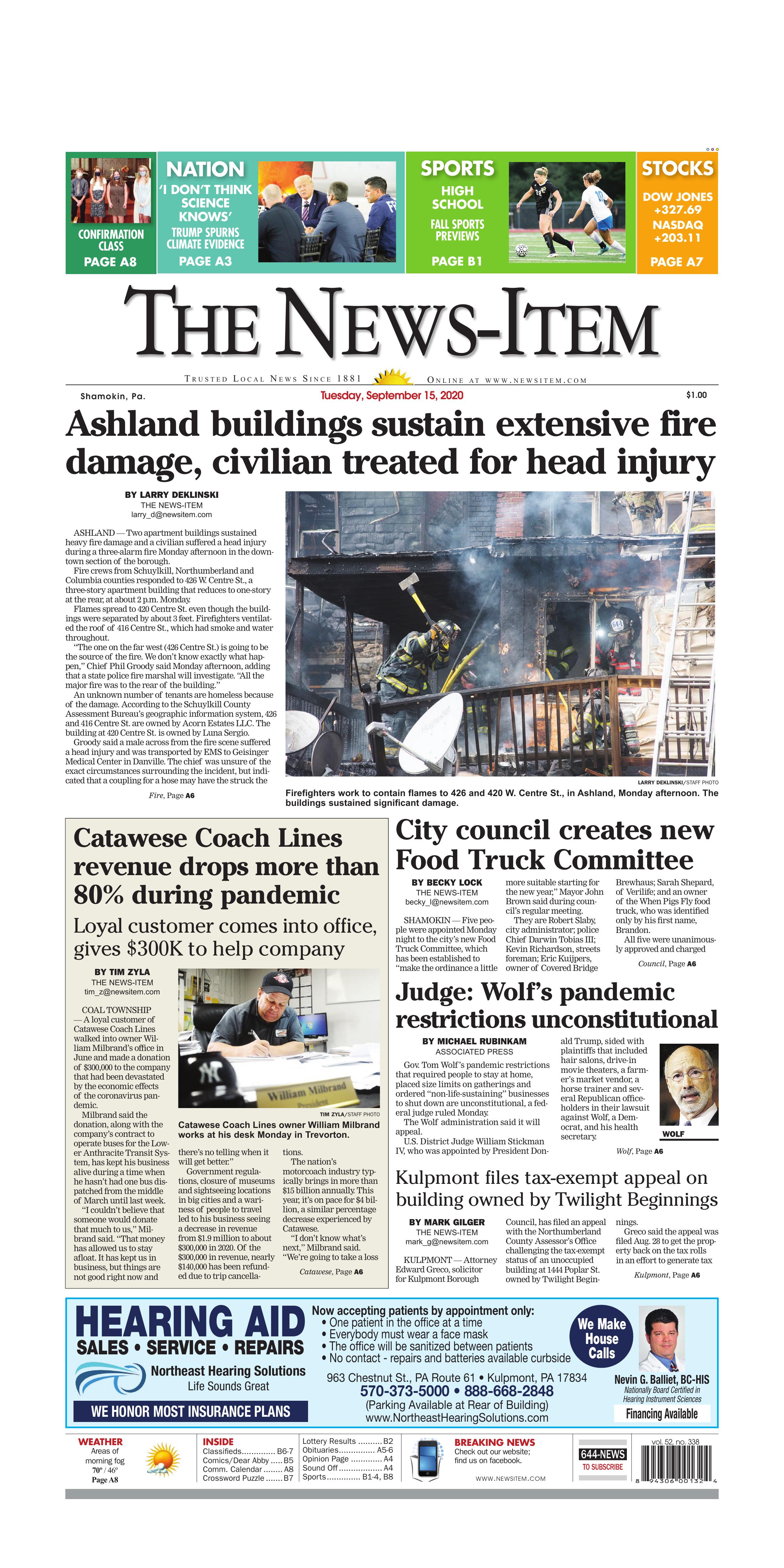