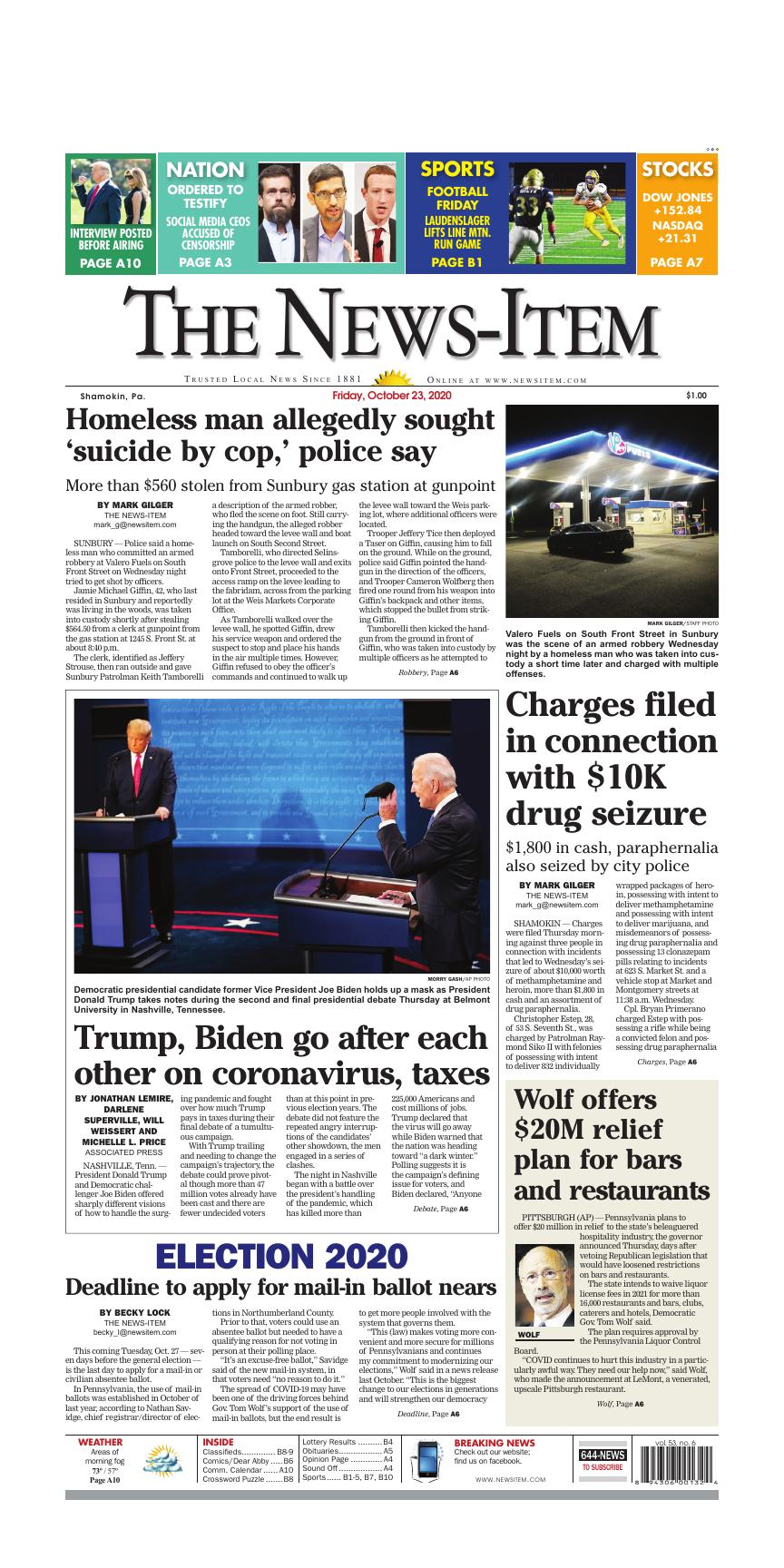 Valero Fuels on South Front Street in Sunbury was the scene of an armed robbery Wednesday night by a homeless man who was taken into custody a short time later and charged with multiple offenses.

SUNBURY — Police said a homeless man who committed an armed robbery at Valero Fuels on South Front Street on Wednesday night tried to get shot by officers.

Jamie Michael Giffin, 42, who last resided in Sunbury and reportedly was living in the woods, was taken into custody shortly after stealing $564.50 from a clerk at gunpoint from the gas station at 1245 S. Front St. at about 8:40 p.m.

The clerk, identified as Jeffery Strouse, then ran outside and gave Sunbury Patrolman Keith Tamborelli a description of the armed robber, who fled the scene on foot. Still carrying the handgun, the alleged robber headed toward the levee wall and boat launch on South Second Street.

Tamborelli, who directed Selinsgrove police to the levee wall and exits onto Front Street, proceeded to the access ramp on the levee leading to the fabridam, across from the parking lot at the Weis Markets Corporate Office.

As Tamborelli walked over the levee wall, he spotted Giffin, drew his service weapon and ordered the suspect to stop and place his hands in the air multiple times. However, Giffin refused to obey the officer’s commands and continued to walk up the levee wall toward the Weis parking lot, where additional officers were located.

Trooper Jeffery Tice then deployed a Taser on Giffin, causing him to fall on the ground. While on the ground, police said Giffin pointed the handgun in the direction of the officers, and Trooper Cameron Wolfberg then fired one round from his weapon into Giffin’s backpack and other items, which stopped the bullet from striking Giffin.

Tamborelli then kicked the handgun from the ground in front of Giffin, who was taken into custody by multiple officers as he attempted to get up.

Officers attempted to render aid to Giffin, who was responsive but uncooperative. Giffin was later treated at the scene by emergency medical services personnel and transported by Americus Ambulance to Geisinger Medical Center in Danville.

Police said Giffin suffered two puncture wounds on his abdomen from the Taser and abrasions on the left side of his head.

Sunbury Police Chief Brad Hare, Sgt. Travis Bremigen and Cpl. Brad Slack responded to the scene to assist with the investigation. State police at Montoursville processed the scene. Officers from Northumberland, Selinsgrove and Shamokin Dam and troopers from the Stonington, Selinsgrove and Milton stations assisted as well.

During an interview with police that Giffin consented to, the suspect recalled officers telling him to get down. Giffin told Bremigen that he had a silver rubber band gun in the waistband of his pants and recalled pulling it out and pointing it at the officers.

When asked why he pointed the gun at the officers, Giffin said he was trying to get shot and referred to his actions as “suicide by cop.”

He denied being involved with the robbery.

One spent round and $506 in cash were recovered from Giffin’s backpack.

Giffin was arraigned at 1:15 p.m. Thursday by Magisterial District Judge Michael Toomey and committed to Northumberland County Jail in lieu of $250,000 cash bail. He is scheduled to face a preliminary hearing Tuesday.

This coming Tuesday, Oct. 27 — seven days before the general election — is the last day to apply for a mail-in or civilian absentee ballot.

In Pennsylvania, the use of mail-in ballots was established in October of last year, according to Nathan Savidge, chief registrar/director of elections in Northumberland County.

Prior to that, voters could use an absentee ballot but needed to have a qualifying reason for not voting in person at their polling place.

“It’s an excuse-free ballot,” Savidge said of the new mail-in system, in that voters need “no reason to do it.”

The spread of COVID-19 may have been one of the driving forces behind Gov. Tom Wolf’s support of the use of mail-in ballots, but the end result is to get more people involved with the system that governs them.

“This (law) makes voting more convenient and more secure for millions of Pennsylvanians and continues my commitment to modernizing our elections,” Wolf said in a news release last October. “This is the biggest change to our elections in generations and will strengthen our democracy by removing barriers to the voting booth and encouraging more people to vote.”

Wolf’s administration said that increasing opportunities to vote would thereby increase turnout. According to a U.S. Government Accountability Office report in 2016, providing more days to register to vote and no-excuse mail-in ballots increased voter participation by more than 4%. In Pennsylvania, that 4% equates to nearly 250,000 votes.

There is no difference between voting at a polling place or voting via a mail-in ballot except that with the latter choice, the voter does not need to leave their home or associate with other people or environments.

To request a mail-in ballot, contact the elections office of the county where you live. For voters who are registered in Northumberland County, that would be Savidge’s office at the administrative building, 320 N. Second St., in Sunbury.

Even quicker than that method is applying online at www.votespa.com, Savidge said.

Voters may return their mail-in or civilian absentee ballots in one of two ways. They can mail it in, in which case the envelope must be postmarked by 8 p.m. Nov. 3; or they can return it in person to their county board of elections office or the “local mail only” box at the Sunbury Post Office, again, no later than 8 p.m.

However, mail-in ballots can be returned prior to that date.

“Our county is a bit ahead of the curve. We have received 7 (thousand) to 8,000 mail-in ballots already,” Savidge said in mid-October. 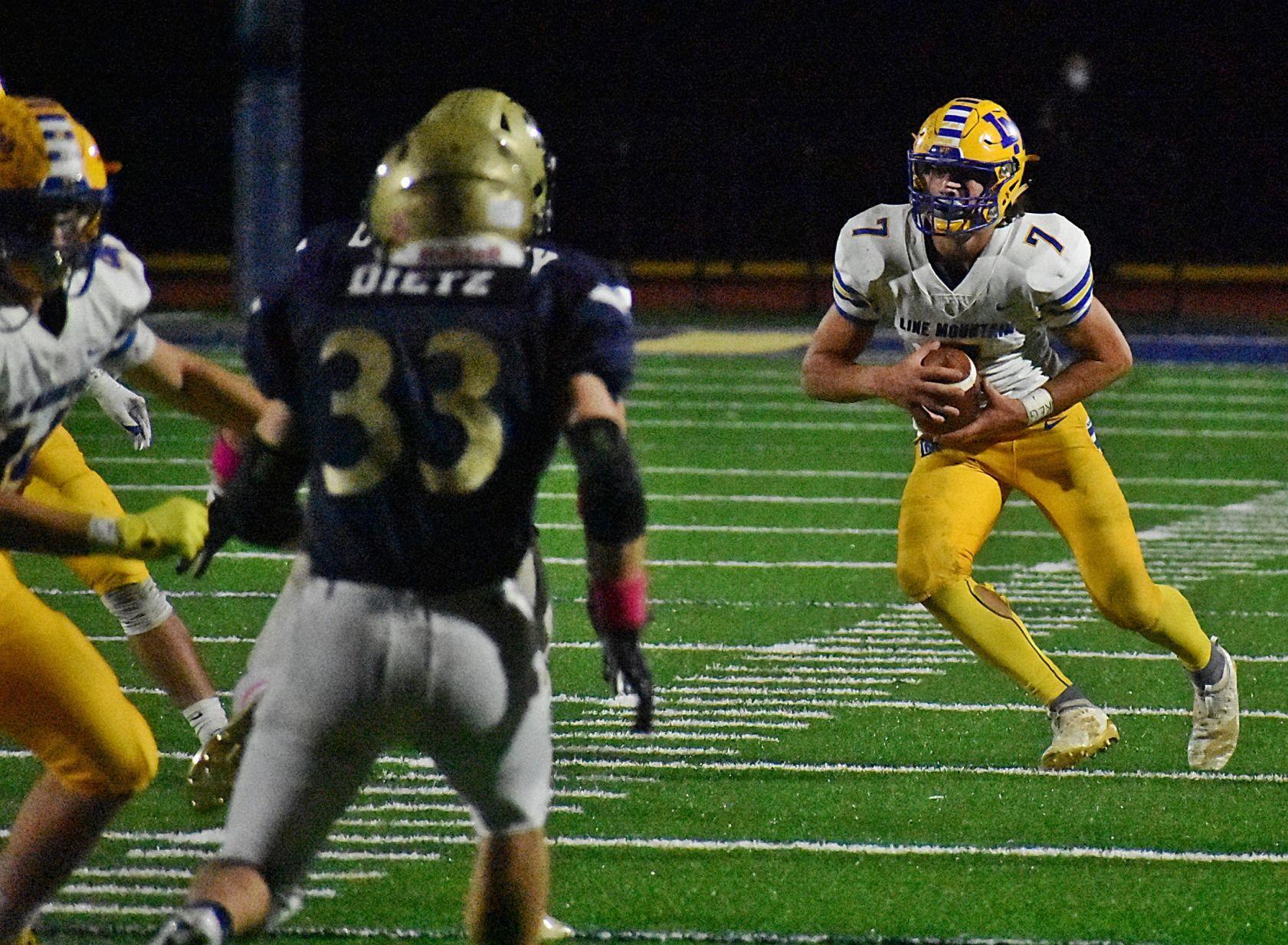 SHAMOKIN — Charges were filed Thursday morning against three people in connection with incidents that led to Wednesday’s seizure of about $10,000 worth of methamphetamine and heroin, more than $1,800 in cash and an assortment of drug paraphernalia.

Cpl. Bryan Primerano charged Estep with possessing a rifle while being a convicted felon and possessing drug paraphernalia involving an incident at his home at 7:47 p.m. Wednesday.

Police said Estep was convicted of possessing with intent to deliver heroin in St. Johns County, Florida, on Aug. 15, 2019.

He was arraigned by video at 9:30 a.m. Thursday by Magisterial District Judge John Gembic III and committed to Northumberland County Jail in lieu of $100,000 cash bail on all charges.

Primerano said Thompson possessed a syringe that she recently used to inject methamphetamine.

Jeffrey Williams, 55, of 623 S. Market St., was charged by Siko with possessing drug paraphernalia, possessing heroin and flight to avoid apprehension relating to Wednesday’s incident at his home.

Williams also was charged by Siko with possessing methamphetamine, possessing drug paraphernalia (three glass smoking pipes) and flight to avoid apprehension in connection with a July 29 incident at his residence.

He was arraigned by Gembic and committed to the county jail in lieu of $20,000 cash bail on all charges. 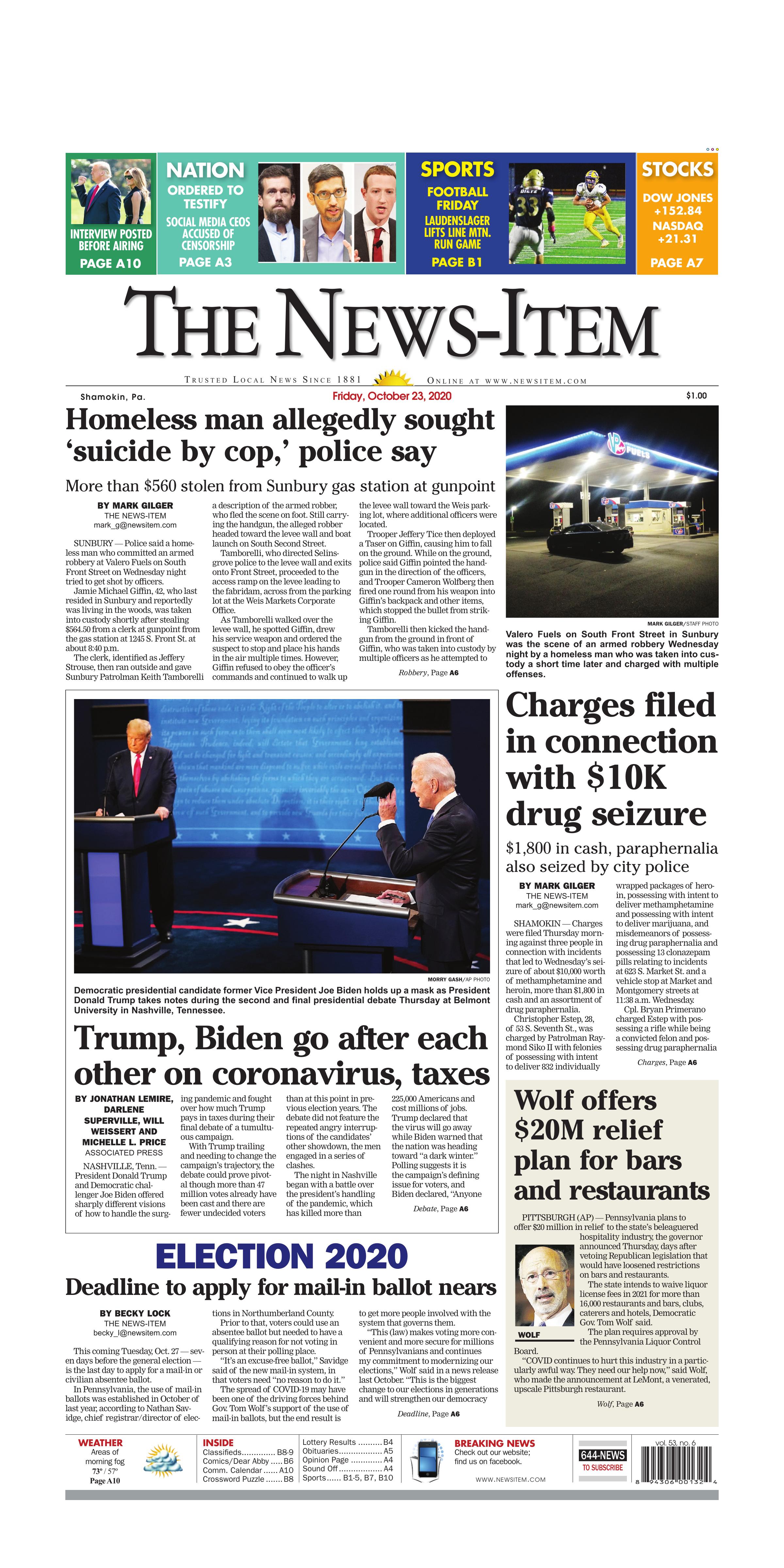