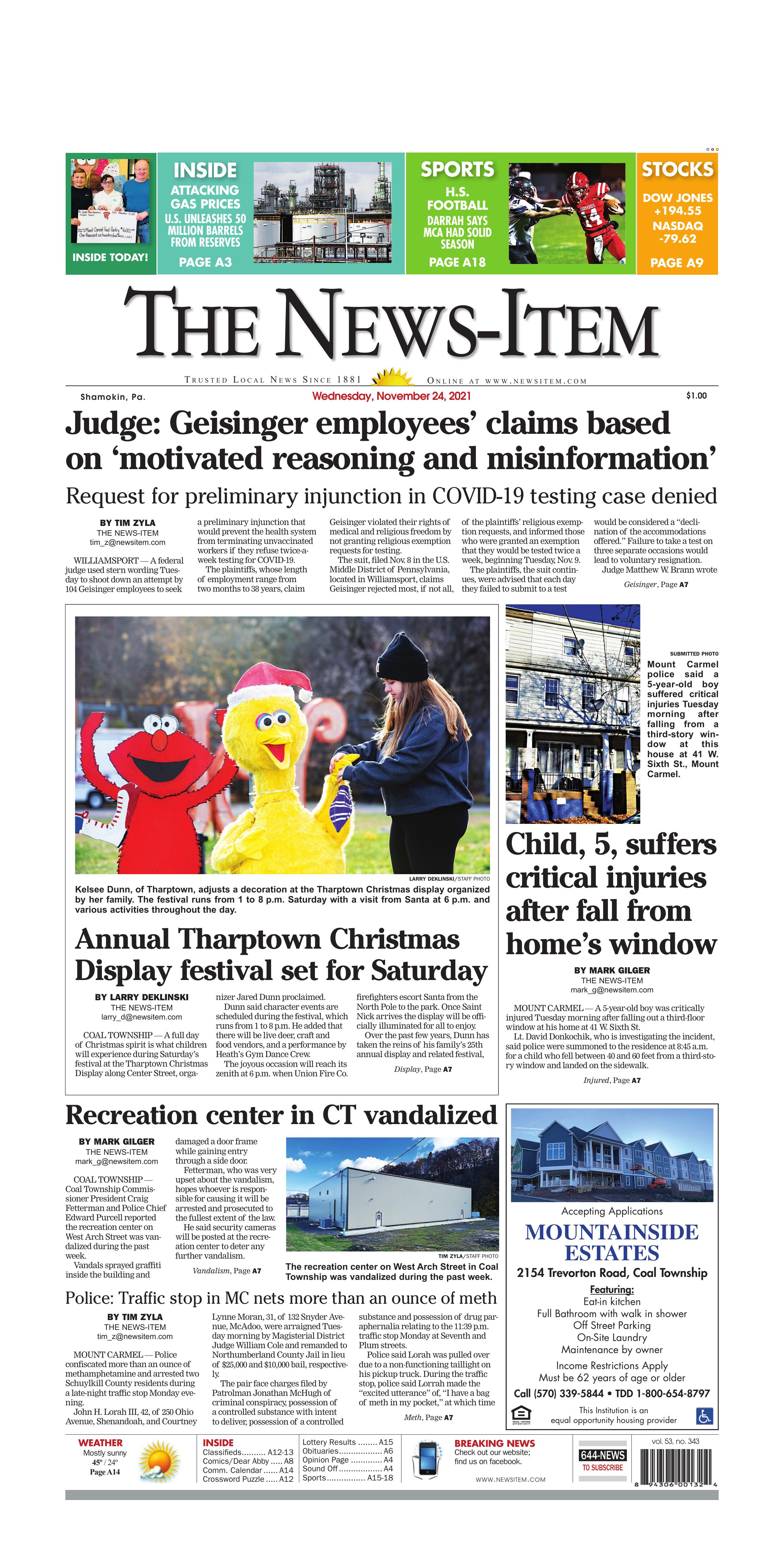 WILLIAMSPORT — A federal judge used stern wording Tuesday to shoot down an attempt by 104 Geisinger employees to seek a preliminary injunction that would prevent the health system from terminating unvaccinated workers if they refuse twice-a-week testing for COVID-19.

The plaintiffs, whose length of employment range from two months to 38 years, claim Geisinger violated their rights of medical and religious freedom by not granting religious exemption requests for testing.

The suit, filed Nov. 8 in the U.S. Middle District of Pennsylvania, located in Williamsport, claims Geisinger rejected most, if not all, of the plaintiffs’ religious exemption requests, and informed those who were granted an exemption that they would be tested twice a week, beginning Tuesday, Nov. 9.

The plaintiffs, the suit continues, were advised that each day they failed to submit to a test would be considered a “declination of the accommodations offered.” Failure to take a test on three separate occasions would lead to voluntary resignation.

Judge Matthew W. Brann wrote in Tuesday’s 30-page memorandum the employees invoked claims of religious discrimination, but focused on the “science” in their claims.

“Now, I’ll admit, some of what they cite seems to have merit,” Brann wrote. “Though I’d be remiss if I didn’t note the vast majority of their case appears to reflect a toxic combination of motivated reasoning and misinformation — a cocktail that promises to plague this country long after COVID-19 has abated.”

He went on to say the Geisinger employees have “utterly failed to demonstrate” that they have a right to not be tested at work, which he said renders their claim “dead-on-arrival.”

Geisinger employees filed the lawsuit seeking what Brann classified as an “exemption-to-the-exemption,” that is, the exemption from being tested twice weekly for COVID-19 after already having received exemptions to not be vaccinated for religious reasons.

In his analysis, Brann said the Geisinger employees’ claims have “failed across the board,” and chastised the plaintiffs’ attorney, Gregory A. Stapp, for suggesting Geisinger, as a private entity, could have infringed on Constitutional rights.

“These claims reflect a fundamental misunderstanding of rights afforded under the Constitution,” Brann wrote. “A failing of civic education that I might sadly expect from an ordinary citizen, but which is inexcusable from a member of the bar.”

Brann said the plaintiffs also failed to make a solid argument under federal and state anti-discrimination law because the employees failed to tell the Court what their religious beliefs are.

Brann said claims by the plaintiffs that PCR and antigen COVID-19 tests cause cancer and are wholly ineffective at identifying when a person is infected are “not worthy of a response.”

“As the English philosopher George Horne wrote, ‘Pertness and ignorance may ask a question in three lines, which it will cost learning and ingenuity 30 pages to answer,’” Brann wrote. “We simply haven’t the time to explore the depths of this statement’s inaccuracy.”

He concluded, “Federal courts are empowered to redress unlawful conduct — not conduct which parties merely perceive as unfair or incorrect. And here, the Geisinger employees have not shown that they are entitled to relief as a matter of law. Their request for a preliminary injunction is denied.”

The deadline Geisinger set for unvaccinated employees to adhere to the twice-a-week testing passed Tuesday night, at which time the employees will be considered to have voluntarily resigned from their jobs.

Kelsee Dunn, of Tharptown, adjusts a decoration at the Tharptown Christmas display organized by her family. The festival runs from 1 to 8 p.m. Saturday with a visit from Santa at 6 p.m. and various activities throughout the day.

Kelsee Dunn, of Tharptown, adds a decoration to a tree at the Tharptown Christmas display organized by her family. The festival runs from 1 to 8 p.m. Saturday with a visit from Santa at 6 p.m. and various activities throughout the day.

COAL TOWNSHIP — A full day of Christmas spirit is what children will experience during Saturday’s festival at the Tharptown Christmas Display along Center Street, organizer Jared Dunn proclaimed.

Dunn said character events are scheduled during the festival, which runs from 1 to 8 p.m. He added that there will be live deer, craft and food vendors, and a performance by Heath’s Gym Dance Crew.

The joyous occasion will reach its zenith at 6 p.m. when Union Fire Co. firefighters escort Santa from the North Pole to the park. Once Saint Nick arrives the display will be officially illuminated for all to enjoy.

Over the past few years, Dunn has taken the reins of his family’s 25th annual display and related festival, the latter which began five years ago. Though the design of the display has changed through the years, the goal remains the same.

“It’s about giving the kids something to enjoy,” Dunn remarked Tuesday while overlooking the hundreds of plastic and cardboard decorations at the community’s playground.

The display contains several themed-areas, such as cardboard cutouts of character’s from “Sesame Street” and a replica of the motorhome from “Christmas Vacation.” The motorhome, Dunn said, was in front of his home, located across the street, last year and was moved into the main display.

“There were always people in front of my home,” Dunn said with a chuckle.

Dunn and his family began placing decorations in mid-October. He credited his mother, Kim, for playing a pivotal role.

“She usually does the layout. She deserves more credit than me, honestly,” he said. “We couldn’t do this without everyone.”

Free-standing decorations aren’t the only things that will brighten the holiday mood. Dunn said two “reindeer” will arrive sometime Friday. Children will have the opportunity to name the deer with an activity with Elmo from 3:30 to 4 p.m.

The full schedule is as follows:

The recreation center on West Arch Street in Coal Township was vandalized during the past week.

Vandals sprayed graffiti inside the building and damaged a door frame while gaining entry through a side door.

Fetterman, who was very upset about the vandalism, hopes whoever is responsible for causing it will be arrested and prosecuted to the fullest extent of the law.

He said security cameras will be posted at the recreation center to deter any further vandalism.

Fetterman said the Coal Township Board of Commissioners is offering a $500 reward for information leading to the arrest of the vandals.

Former longtime Coal Township Commissioner Gene Welsh donated $200,000 toward the recreation center in honor of his wife, Denise, and their family.

The indoor recreation facility, which is nearing completion, will house gymnasium equipment, a basketball court and enough infrastructure to expand the building. It will be named The Welsh Center in honor of the Welsh family.

Police said Lorah was pulled over due to a non-functioning taillight on his pickup truck. During the traffic stop, police said Lorrah made the “excited utterance” of, “I have a bag of meth in my pocket,” at which time he was taken into custody.

Moran told police she could not drive the vehicle from the scene due to having a suspended license, at which time police searched the vehicle prior to it being impounded.

McHugh the found a plastic container inside the vehicle with a white, crystal-like substance weighing 31.5 grams, including the packaging material, court documents show.

In addition to the charges filed against both parties, Lorah has also been charged with driving without a license, failing to use a turn signal and driving with unsafe lighting.

Lorah and Moran are both scheduled to appear before Cole on Dec. 1 for a preliminary hearing. 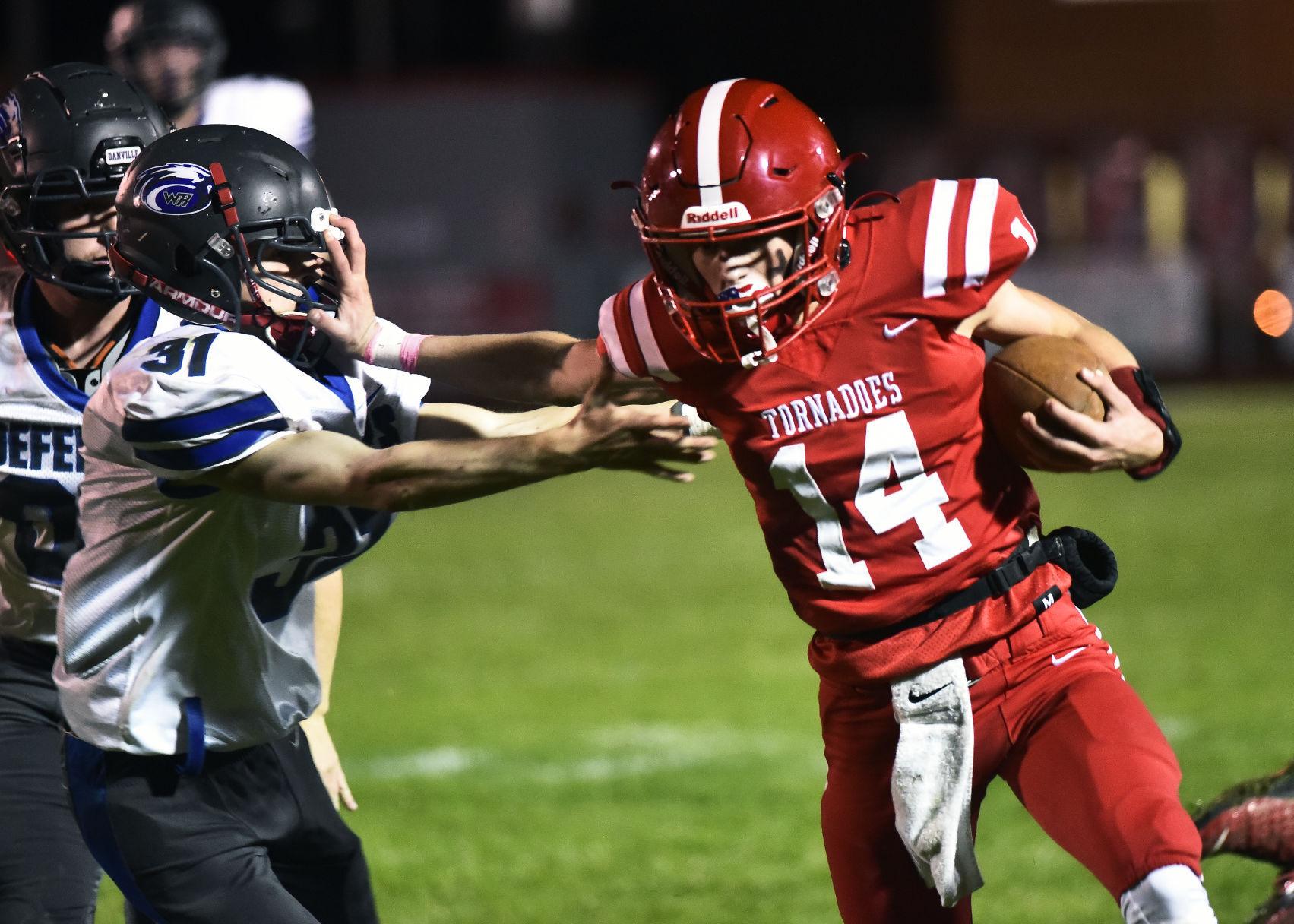 MOUNT CARMEL — A 5-year-old boy was critically injured Tuesday morning after falling out a third-floor window at his home at 41 W. Sixth St.

Lt. David Donkochik, who is investigating the incident, said police were summoned to the residence at 8:45 a.m. for a child who fell between 40 and 60 feet from a third-story window and landed on the sidewalk.

The boy was initially treated inside his home by emergency medical personnel before being transported by AREA Services ambulance to Mount Carmel Area High School, where a Life Flight helicopter landed and flew him to Geisinger Medical Center in Danville.

Donkochik said he interviewed the parents of the boy Tuesday morning and is continuing his investigation. He said Northumberland County Children and Youth Services caseworkers are assisting in the probe. 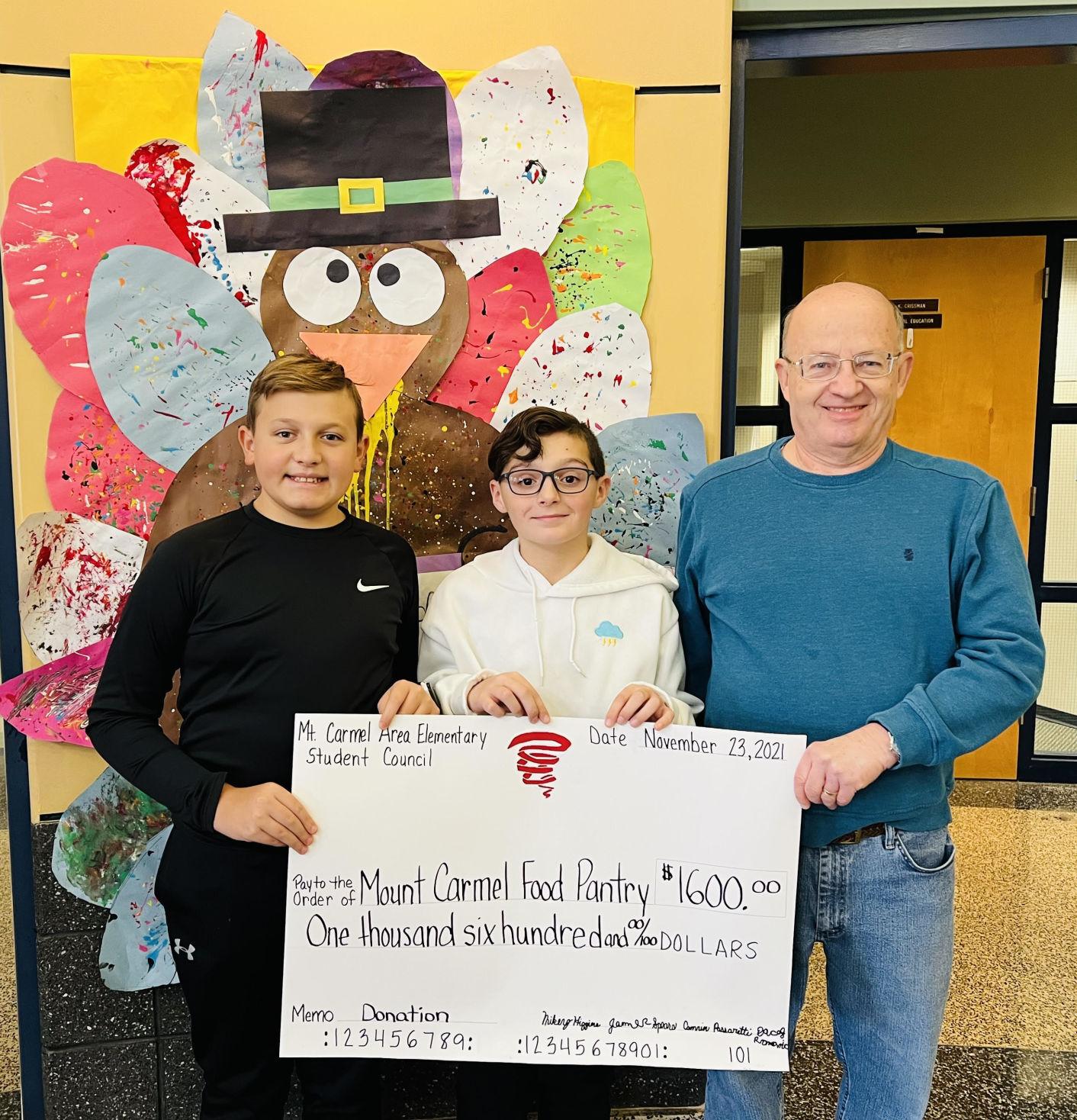 This year the Mount Carmel Area Elementary Student Council had a competition called Turkey Wars to help out the community. During this time, homerooms collected donations for one week. The two highest homerooms, Mrs. Geist, sixth grade, and Mrs. Kimmel, second grade, will receive a pizza party. Teachers were very pleased to be able to donate $1,600 to the Mount Carmel Area Ministerium Food Pantry. Pictured, from left, are Jacob Romanic, Camrin Passaretti and Jake Betz.