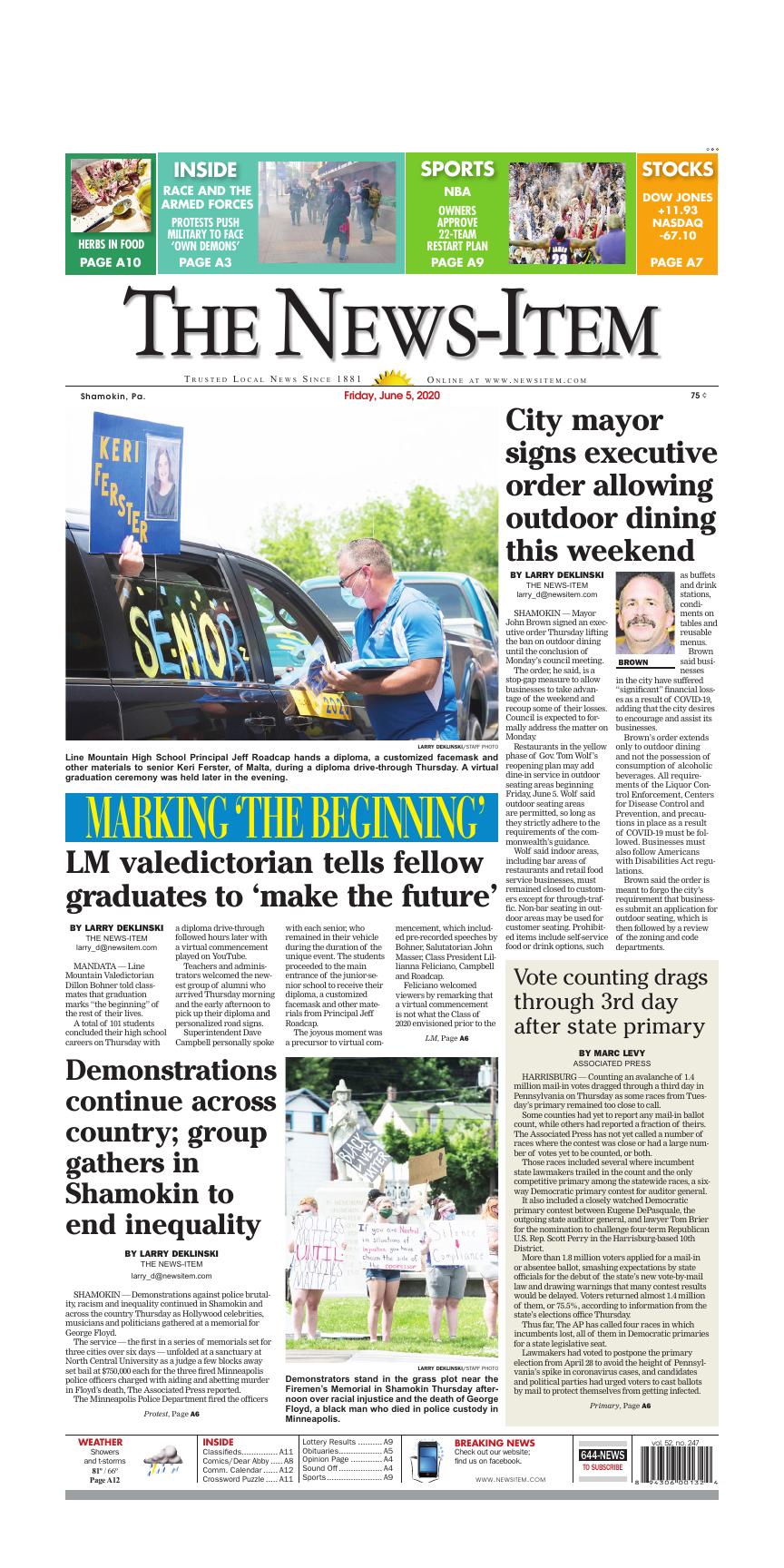 Line Mountain High School Principal Jeff Roadcap hands a diploma, a customized facemask and other materials to senior Keri Ferster, of Malta, during a diploma drive-through Thursday. A virtual graduation ceremony was held later in the evening.

Line Mountain School District teachers and staff wave to seniors during a diploma drive-through Thursday at the junior-senior high school. A virtual graduation ceremony was held later in the evening.

MANDATA — Line Mountain Valedictorian Dillon Bohner told classmates that graduation marks “the beginning” of the rest of their lives.

A total of 101 students concluded their high school careers on Thursday with a diploma drive-through followed hours later with a virtual commencement played on YouTube.

Teachers and administrators welcomed the newest group of alumni who arrived Thursday morning and the early afternoon to pick up their diploma and personalized road signs.

Superintendent Dave Campbell personally spoke with each senior, who remained in their vehicle during the duration of the unique event. The students proceeded to the main entrance of the junior-senior school to receive their diploma, a customized facemask and other materials from Principal Jeff Roadcap.

Feliciano welcomed viewers by remarking that a virtual commencement is not what the Class of 2020 envisioned prior to the pandemic, but that the district and students have made the best of a less than ideal situation.

“When life gives you lemons make lemonade — or in this case, when life gives you quarantine, you make virtual graduation,” she said. “Members of the Class of 2020, we are truly outstanding. Over the past 13 years, we have watched each other grow, but most importantly, we watched ourselves grow.”

Feliciano said parents, teachers and staff were the Class of 2020’s support system while attending Line Mountain, which occurred in a “half blink” of an eye.

She acknowledged her classmates’ accomplishments during the past four years, noting that they now have an opportunity to share that talent with the world.

“This is a stepping stone that sets us on the path for the rest of our lives,” she said. “Since it is time to move from one place to the next, remember what got you here. No matter where life takes you, remember where you came from.”

Masser thanked everyone for watching the program, adding that although virtual graduation was an unusual way to recognize the accomplishments of the Class of 2020, the graduates appreciated the support of viewers.

Masser said his speech was inspired by Mike Rowe, best known for the television series “Dirty Jobs,” who said following passion is bad advice and dream jobs are just “dreams.”

“Rowe means that everyone should follow their opportunities and not their aspirations, so they get a good job and develop a passion for that job,” Masser explained. “I believe the truth lies between what we have been told and Mike Rowe.”

Masser said each member of the Class of 2020 will find a unique set of opportunities during their lives. Instead of chasing a single dream job, he advised, people should take jobs in their field that aligns with their passions.

Masser encouraged his classmates to keep an open mind toward any opportunities that come their way, adding that passions can develop from new experiences and “opportunities can become your new passions.”

Bohner began his remarks by thanking front-line workers, medical staff and researchers who have worked during the pandemic, which caused the closure of schools in mid-March.

“Standing here now, it’s so hard to believe that high school is really over and that it ended so abruptly. Looking back on it now, it seems it went by in a heartbeat,” Bohner said. “Yet, at the same time, I can recall an abundance of great memories of fun and excellent times with classmates and friends that seemed to have happened over such a long time.”

Although the time for making memories at Line Mountain is over, he told his classmates that graduation is just the start of their lives.

“School is a building with four walls and a future inside,” Bohner said. “And now, it’s finally time to make the future that we have been preparing, for so long, a reality.”

He said the future remains unknown and there are no guarantees, but advised his classmates to focus on excitement, rather than fear.

“The only way to get passed that fear is to accept that it is there and conquer it,” Bohner said. “The best way to ensure a better future is to learn from our mistakes.”

The approximate 45-minute program, which was produced by Herff Jones, concluded with a picture of each senior and a slide show of memories made over the years.

Demonstrators stand in the grass plot near the Firemen’s Memorial in Shamokin Thursday afternoon.

Demonstrators stand in the grass plot near the Firemen’s Memorial in Shamokin Thursday afternoon.

A demonstrator stands in the grass plot near the Firemen’s Memorial in Shamokin Thursday afternoon over racial injustice the death of George Floyd, a black man who died in police custody in Minneapolis.

SHAMOKIN — Demonstrations against police brutality, racism and inequality continued in Shamokin and across the country Thursday as Hollywood celebrities, musicians and politicians gathered at a memorial for George Floyd.

The service — the first in a series of memorials set for three cities over six days — unfolded at a sanctuary at North Central University as a judge a few blocks away set bail at $750,000 each for the three fired Minneapolis police officers charged with aiding and abetting murder in Floyd’s death, The Associated Press reported.

The Minneapolis Police Department fired the officers last week, along with Derek Chauvin, who is charged with second-degree murder and second-degree manslaughter in Floyd’s May 25 death.

Peaceful demonstrations have been held in Shamokin, Sunbury, Milton and various other municipalities in the Susquehanna Valley this week.

About 25 people gathered Monday and Thursday on a grass plot in front of the Firemen’s Memorial in Shamokin to put an end to inequality.

City police officers and those from mutual-aid departments gathered behind the memorial and had cordial interactions with demonstrators, Chief Darwin Tobias III said.

“(The demonstrations) were peaceful, which is good, and I think it goes a lot further than active destruction and violence,” Tobias said, referencing looting and other crimes that coursed across the country.

Tobias greeted Thursday’s demonstrators and was available to speak with them one-on-one, if they desired, to hear their thoughts and concerns. The discussions, he said, were positive.

Among the demonstrators was Rebekah Faust, who believes protests held throughout the country have made progress. Watching officers join demonstrators at some gatherings, she said, brought her happiness.

The 18-year-old from Paxinos held various homemade signs throughout the afternoon, including one that read “their stories matter, so let’s make history today.”

“This means all the stories of anyone who has been affected by police brutality — their stories matter, whether they survived it or not,” she said. “It’s time to make history and stand up for our brothers and sisters of a different color.”

Corey Sosnoskie said he originally came to watch the demonstration, but felt inspired to join the cause and support the group. The 15-year-old said some of his friends were victim to crude comments during a recent demonstration in Mount Carmel.

“The peaceful protests are a very good thing. I don’t really support the riots, but I support getting the message out,” he said. “I think that there are corrupt people in the world and do have an advantage — and I think people need to make a stand.”

In the U.S., where protests had been marked by bouts of lawlessness since last week, relative quiet continued for a second straight night Wednesday following a decision by prosecutors to charge the three other officers at the scene and file a new, more serious count of murder against Chauvin.

The new charges in Minneapolis punctuated an unprecedented week in recent American history, in which largely peaceful protests took place in communities of all sizes but were rocked by bursts of violence, including deadly attacks on officers, theft, vandalism and arson. In Minneapolis alone, more than 220 buildings were damaged or burned, with damage topping $55 million, city officials said.

The order, he said, is a stop-gap measure to allow businesses to take advantage of the weekend and recoup some of their losses. Council is expected to formally address the matter on Monday.

Wolf said indoor areas, including bar areas of restaurants and retail food service businesses, must remained closed to customers except for through-traffic. Non-bar seating in outdoor areas may be used for customer seating. Prohibited items include self-service food or drink options, such as buffets and drink stations, condiments on tables and reusable menus.

Brown said businesses in the city have suffered “significant” financial losses as a result of COVID-19, adding that the city desires to encourage and assist its businesses.

Brown’s order extends only to outdoor dining and not the possession of consumption of alcoholic beverages. All requirements of the Liquor Control Enforcement, Centers for Disease Control and Prevention, and precautions in place as a result of COVID-19 must be followed. Businesses must also follow Americans with Disabilities Act regulations.

Brown said the order is meant to forgo the city’s requirement that businesses submit an application for outdoor seating, which is then followed by a review of the zoning and code departments. 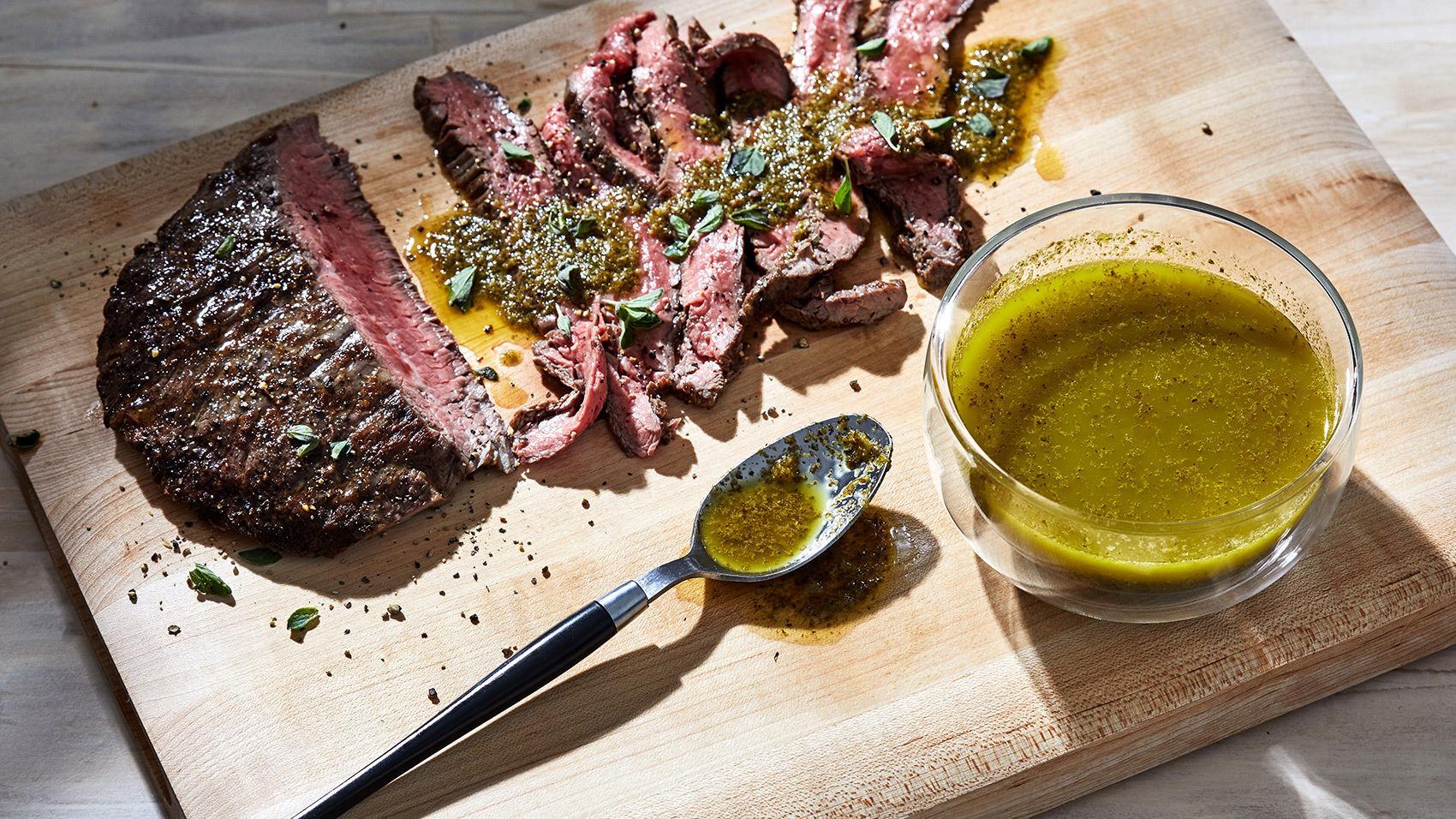 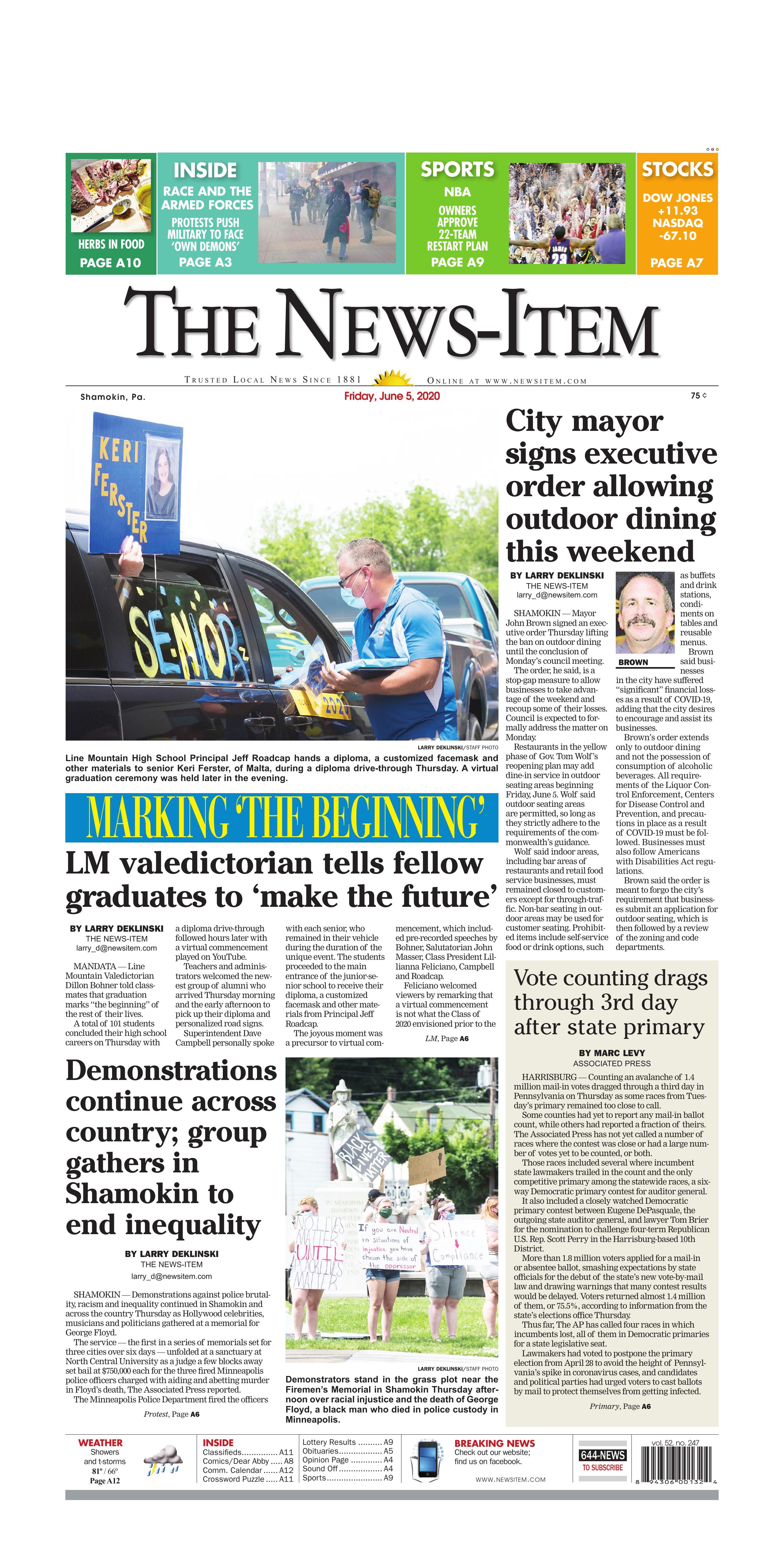