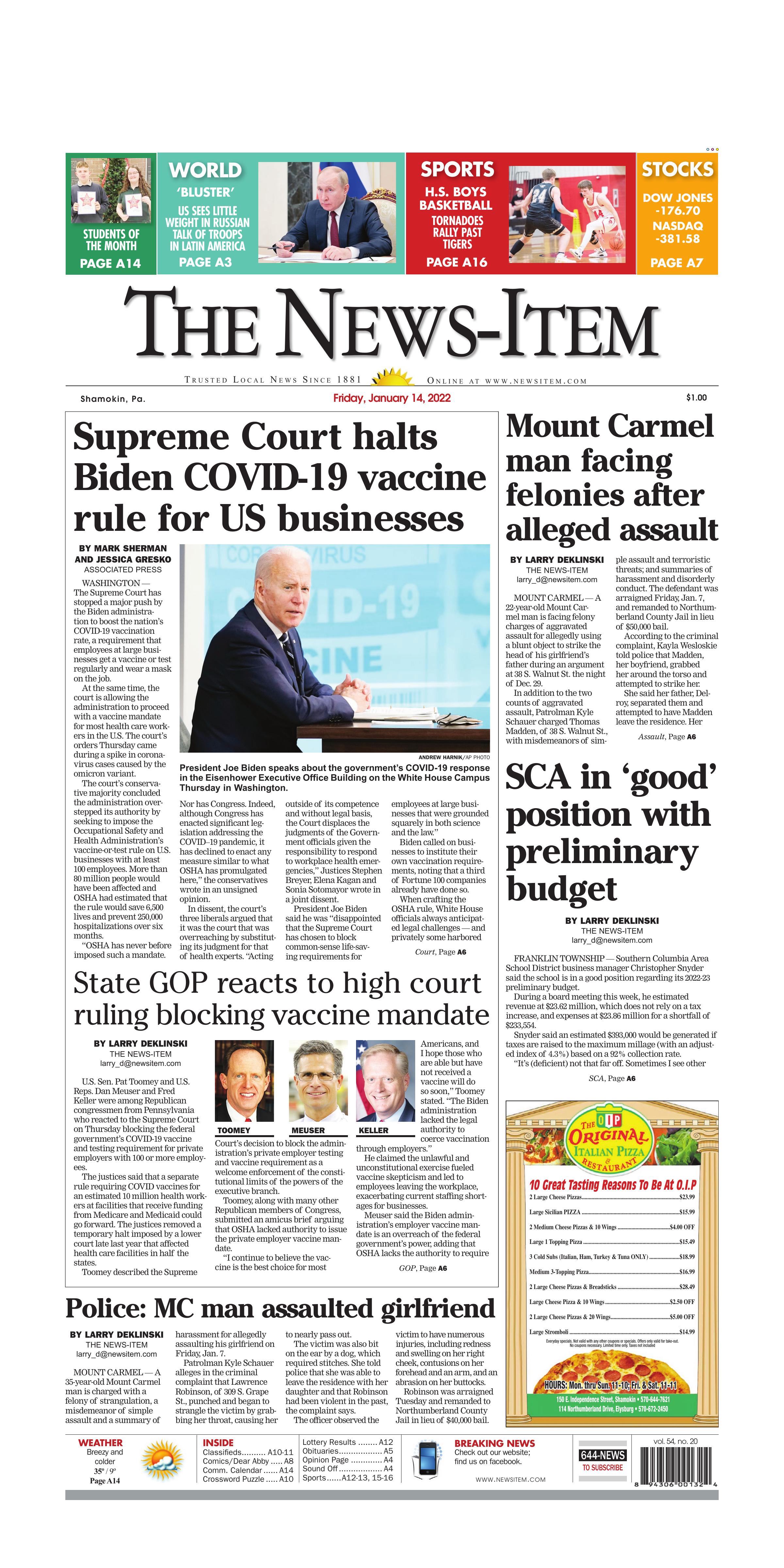 U.S. Sen. Pat Toomey and U.S. Reps. Dan Meuser and Fred Keller were among Republican congressmen from Pennsylvania who reacted to the Supreme Court on Thursday blocking the federal government’s COVID-19 vaccine and testing requirement for private employers with 100 or more employees.

The justices said that a separate rule requiring COVID vaccines for an estimated 10 million health workers at facilities that receive funding from Medicare and Medicaid could go forward. The justices removed a temporary halt imposed by a lower court late last year that affected health care facilities in half the states.

Toomey described the Supreme Court’s decision to block the administration’s private employer testing and vaccine requirement as a welcome enforcement of the constitutional limits of the powers of the executive branch.

Toomey, along with many other Republican members of Congress, submitted an amicus brief arguing that OSHA lacked authority to issue the private employer vaccine mandate.

“I continue to believe the vaccine is the best choice for most Americans, and I hope those who are able but have not received a vaccine will do so soon,” Toomey stated. “The Biden administration lacked the legal authority to coerce vaccination through employers.”

He claimed the unlawful and unconstitutional exercise fueled vaccine skepticism and led to employees leaving the workplace, exacerbating current staffing shortages for businesses.

Meuser said the Biden administration’s employer vaccine mandate is an overreach of the federal government’s power, adding that OSHA lacks the authority to require employers to force their employees to be vaccinated.

“Over the last few months, this mandate has left business owners reeling over how to comply and, more importantly, employees concerned about keeping their jobs,” Meuser said. “I applaud the Supreme Court’s decision to stop enforcement of this mandate while the courts fully review the legality of the Biden administration’s actions and bring a sense of certainty back to the workplace. I look forward to the court’s decision in the future and this unconstitutional mandate, issued by the Biden Administration, being permanently struck down.”

Keller said the Supreme Court’s decision was the outcome he expected.

“While the case now returns to the lower courts, I will continue my efforts to permanently eliminate this unconstitutional mandate under the Congressional Review Act (CRA),” Keller stated. “Our CRA resolution has the unanimous support of the entire House Republican Conference, and our team has held productive conversations with House Democrats who recognize how disastrous President Biden’s mandate would be if enacted.”

Keller is hopeful that the Supreme Court ruling will inspire more House Democrats to join Republicans to force a vote on the floor to eliminate “this egregious mandate once and for all.”

MOUNT CARMEL — A 35-year-old Mount Carmel man is charged with a felony of strangulation, a misdemeanor of simple assault and a summary of harassment for allegedly assaulting his girlfriend on Friday, Jan. 7.

Patrolman Kyle Schauer alleges in the criminal complaint that Lawrence Robinson, of 309 S. Grape St., punched and began to strangle the victim by grabbing her throat, causing her to nearly pass out.

The victim was also bit on the ear by a dog, which required stitches. She told police that she was able to leave the residence with her daughter and that Robinson had been violent in the past, the complaint says.

The officer observed the victim to have numerous injuries, including redness and swelling on her right cheek, contusions on her forehead and an arm, and an abrasion on her buttocks.

Robinson was arraigned Tuesday and remanded to Northumberland County Jail in lieu of $40,000 bail. 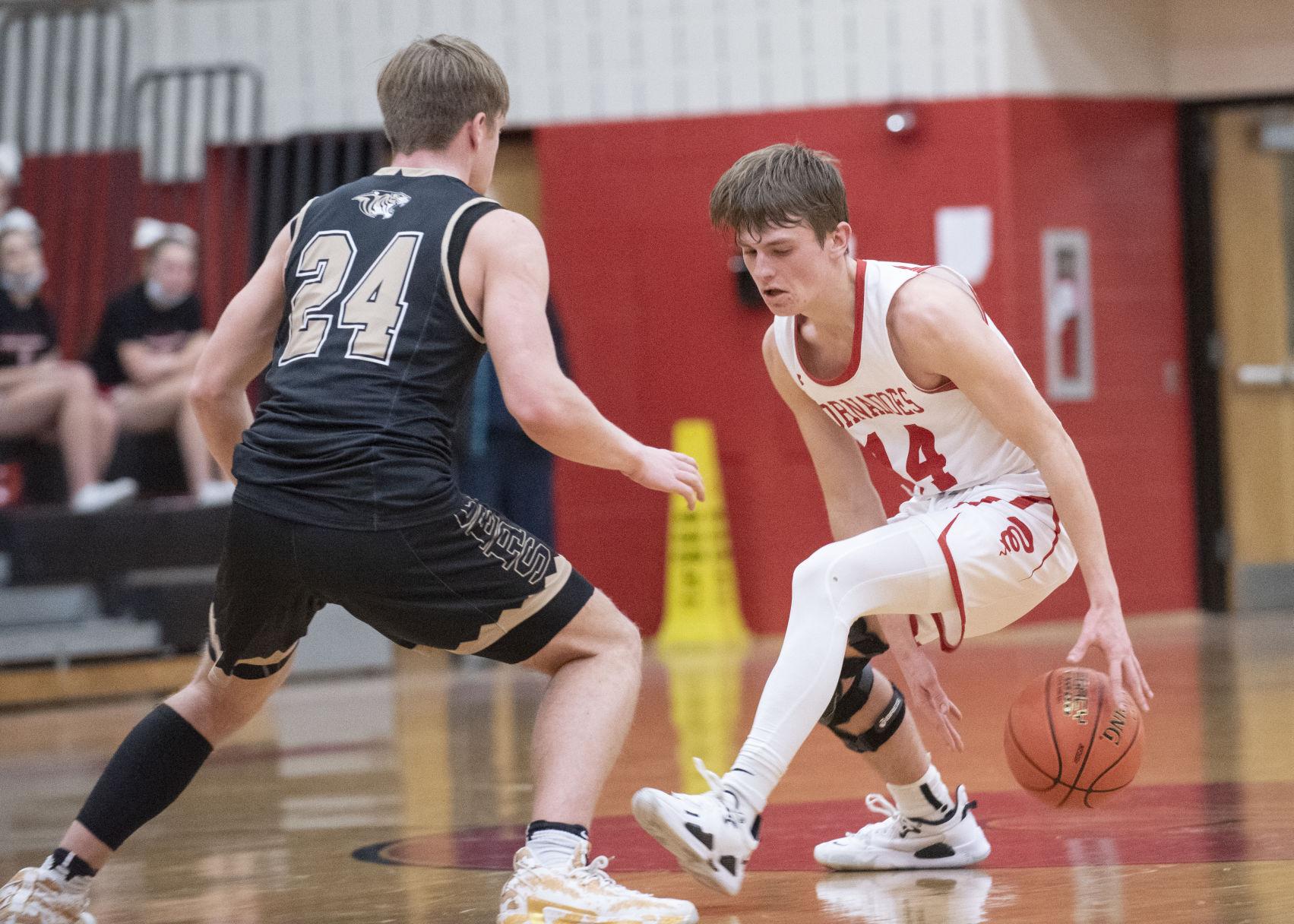 Mount Carmel’s Garrett Varano keeps the ball away from Southern Columbia’s Braeden Wisloski during a game Thursday at Mount Carmel.

MOUNT CARMEL — A 22-year-old Mount Carmel man is facing felony charges of aggravated assault for allegedly using a blunt object to strike the head of his girlfriend’s father during an argument at 38 S. Walnut St. the night of Dec. 29.

In addition to the two counts of aggravated assault, Patrolman Kyle Schauer charged Thomas Madden, of 38 S. Walnut St., with misdemeanors of simple assault and terroristic threats; and summaries of harassment and disorderly conduct. The defendant was arraigned Friday, Jan. 7, and remanded to Northumberland County Jail in lieu of $50,000 bail.

According to the criminal complaint, Kayla Wesloskie told police that Madden, her boyfriend, grabbed her around the torso and attempted to strike her.

She said her father, Delroy, separated them and attempted to have Madden leave the residence. Her boyfriend, she said, then struck her father several times in the head with a pocket knife and threatened to kill them, the complaint says.

Delroy told police he was at home, at 40 S. Walnut St., when he heard a verbal argument. He said Madden had previously made a threat toward his daughter and other family members, so he made entry into 38 S. Walnut St.

He told police that he observed Madden grabbing his daughter and separated the two. He said Madden attempted to provoke him, then struck him with a blunt object, causing his glasses to break, the complaint alleges.

Delroy later sought medical treatment. He was diagnosed with a right cornea abrasion, subconjunctival hemorrhage and a facial laceration, the complaint says.

Snyder said an estimated $393,000 would be generated if taxes are raised to the maximum millage (with an adjusted index of 4.3%) based on a 92% collection rate.

“It’s (deficient) not that far off. Sometimes I see other districts starting with a million dollar deficient and have to work their way out of it,” Snyder said. “I didn’t cut expenses anywhere. Nothing was cut from the budget. Things were adjusted to better reflect the change in revenue and expenditure.”

Later in the meeting, the board passed a resolution stating it will not raise the rate of any tax for the support of the budget by more than its index. The board certified that increasing any tax at a rate less than or equal to the index will be sufficient to balance its final budget.

When asked by a school board member how the millage rate compares to neighboring schools, Snyder said Southern Columbia’s millage rate in Columbia County is 53.37 while Northumberland County is 70.84 or $7.08 on each $100 of assessed value, and would compile a list of milage rates in nearby schools.

Snyder informed that the district’s server provider suggested that an upgrade should be done. The allocation is new to the 2022-23 budget.

Brian Davis, director of technology, pitched the idea of purchasing 115 computers at a cost of about $52,500 for ninth-graders.

He acknowledged that the district’s budget for 2022-23 is not complete, but said the CSIU is willing to purchase the machines now and send them to Southern Columbia, then bill the district on July 1 (the start of the district’s fiscal year) to avoid a potential increase in price. 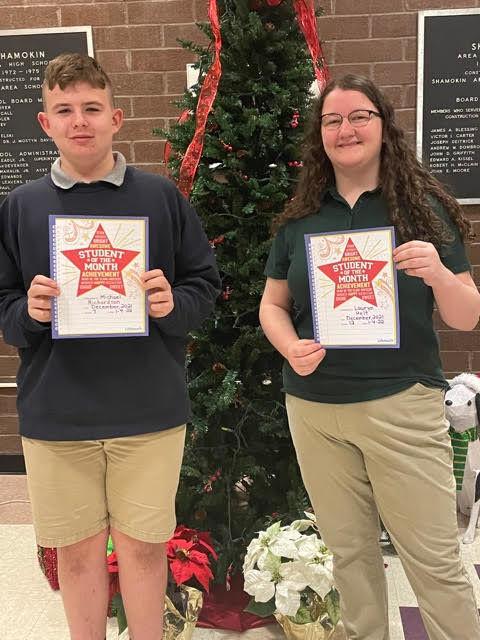 Twelfth-grade student Lauryn Helt and seventh-grade student Michael Richardson have been selected as Students of the Month for December at Shamokin Area Middle-High School. Lauryn is a daughter of Aaron and Alaena Helt. She is a distinguished honor roll student, volunteers her time to help other students with their homework and is a game designer. In her spare time Lauryn enjoys digital and traditional design. Michael is a son of John and Tracy Richardson. He is a distinguished honor roll student and participates in B.E.S.T club. In his spare time, Michael enjoys playing ice hockey. Pictured, from left, are Richardson and Helt.