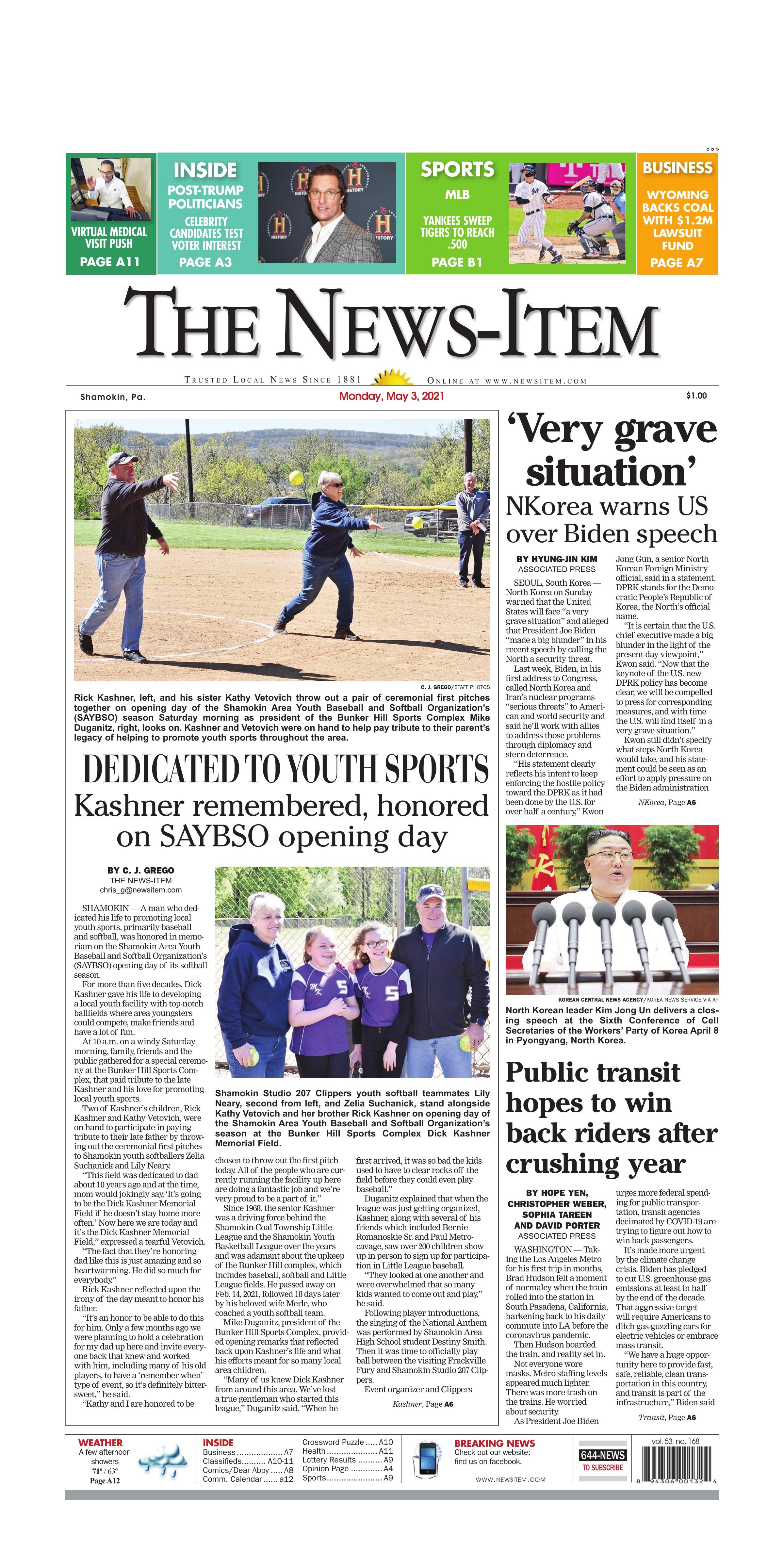 Rick Kashner, left, and his sister, Kathy Vetovich, throw out a pair of ceremonial first pitches together on opening day of the Shamokin Area Youth Baseball and Softball Organization’s (SAYBSO) season Saturday morning as president of the Bunker Hill Sports Complex Mike Duganitz, right, looks on. Kashner and Vetovich were on hand to help pay tribute to their parents’ legacy of helping to promote youth sports throughout the area.

SHAMOKIN — A man who dedicated his life to promoting local youth sports, primarily baseball and softball, was honored in memoriam on the Shamokin Area Youth Baseball and Softball Organization’s (SAYBSO) opening day of its softball season.

For more than five decades, Dick Kashner gave his life to developing a local youth facility with top-notch ballfields where area youngsters could compete, make friends and have a lot of fun.

At 10 a.m. on a windy Saturday morning, family, friends and the public gathered for a special ceremony at the Bunker Hill Sports Complex, that paid tribute to the late Kashner and his love for promoting local youth sports.

Two of Kashner’s children, Rick Kashner and Kathy Vetovich, were on hand to participate in paying tribute to their late father by throwing out the ceremonial first pitches to Shamokin youth softballers Zelia Suchanick and Lily Neary.

“The fact that they’re honoring dad like this is just amazing and so heartwarming. He did so much for everybody.”

Rick Kashner reflected upon the irony of the day meant to honor his father.

“It’s an honor to be able to do this for him. Only a few months ago we were planning to hold a celebration for my dad up here and invite everyone back that knew and worked with him, including many of his old players, to have a ‘remember when’ type of event, so it’s definitely bittersweet,” he said.

“Kathy and I are honored to be chosen to throw out the first pitch today. All of the people who are currently running the facility up here are doing a fantastic job and we’re very proud to be a part of it.”

Since 1968, the senior Kashner was a driving force behind the Shamokin-Coal Township Little League and the Shamokin Youth Basketball League over the years and was adamant about the upkeep of the Bunker Hill complex, which includes baseball, softball and Little League fields. He passed away on Feb. 14, 2021, followed 18 days later by his beloved wife Merle, who coached a youth softball team.

Mike Duganitz, president of the Bunker Hill Sports Complex, provided opening remarks that reflected back upon Kashner’s life and what his efforts meant for so many local area children.

“Many of us knew Dick Kashner from around this area. We’ve lost a true gentleman who started this league,” Duganitz said. “When he first arrived, it was so bad the kids used to have to clear rocks off the field before they could even play baseball.”

Duganitz explained that when the league was just getting organized, Kashner, along with several of his friends which included Bernie Romanoskie Sr. and Paul Metrocavage, saw over 200 children show up in person to sign up for participation in Little League baseball.

“They looked at one another and were overwhelmed that so many kids wanted to come out and play,” he said.

Following player introductions, the singing of the National Anthem was performed by Shamokin Area High School student Destiny Smith. Then it was time to officially play ball between the visiting Frackville Fury and Shamokin Studio 207 Clippers.

Event organizer and Clippers coach Steven Suchanick, said that the youth baseball and softball teams will wear patches on their uniforms throughout this season with the initials ‘D.K.’ and ‘M.K.’ on them respectively in memory of Dick and Merle Kashner.

Local radio personality Chad Evans, a disc jockey from 94.1 FM, provided music for the event. Fundraising activities included raffles and a bake sale to help raise money for the league. Donations were made by local businesses with all proceeds going directly to the league.

Legendary sports radio announcer Tommy Ryan reflected back upon what he believes Kashner meant to youth sports in the Shamokin area.

“His half-century of dedication to the Bunker Hill Sports Complex, and the many thousands of hours of work it involved should never be forgotten or taken for granted. In his quiet, unassuming way, he touched thousands of lives, both young and old.”

Duganitz said that the current board plans to move forward with a number of plans to honor Dick and Merle posthumously, including the renaming of the concession stand to “Kashner’s Kitchen” and construction of a new monument with a memorial plaque outside the fence near the home dugout.

New York Yankees’ Kyle Higashioka watches his RBI-double during the second inning of a baseball game against the Detroit Tigers at Yankee Stadium Sunday in New York.