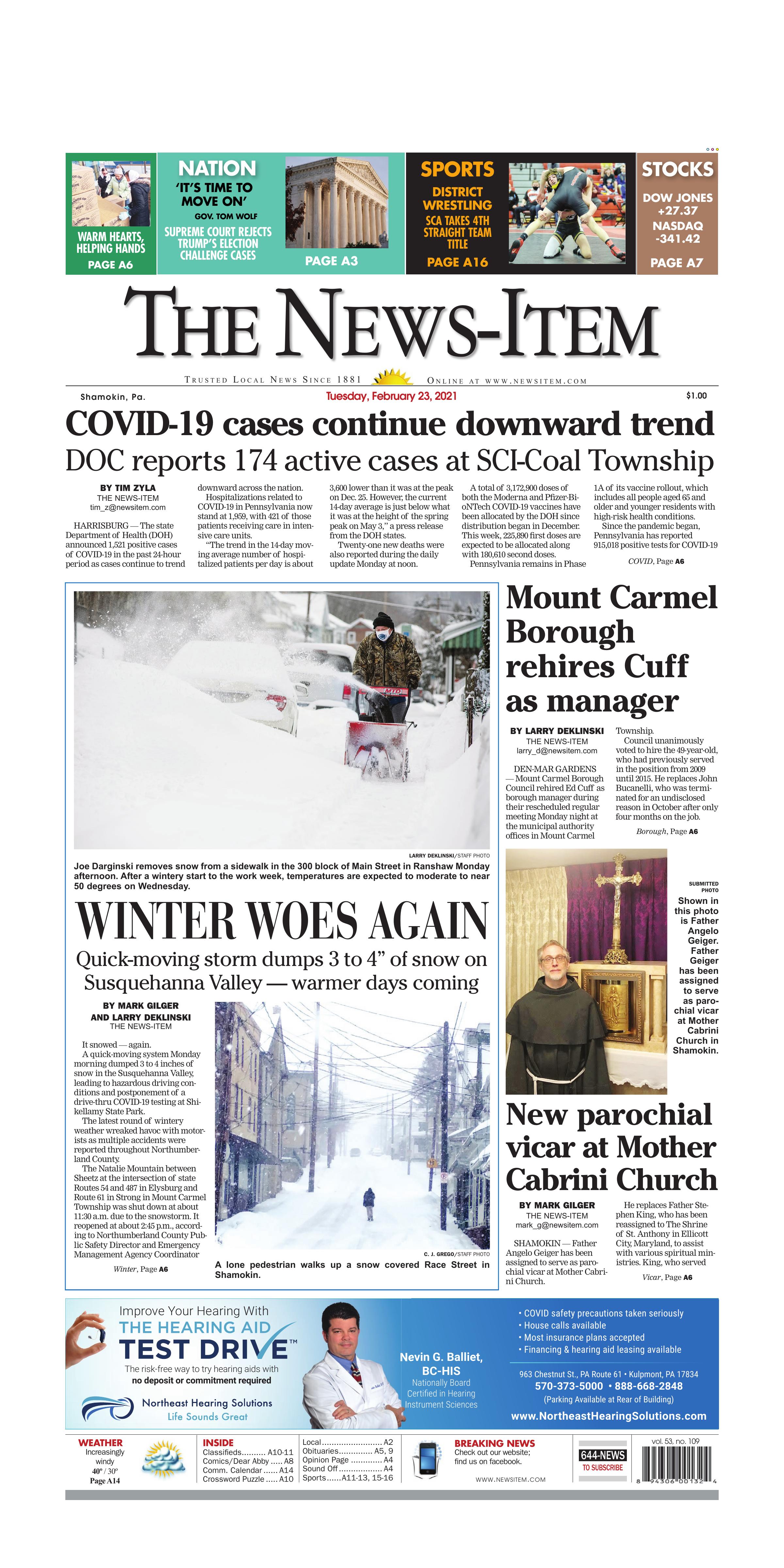 HARRISBURG — The state Department of Health (DOH) announced 1,521 positive cases of COVID-19 in the past 24-hour period as cases continue to trend downward across the nation.

Hospitalizations related to COVID-19 in Pennsylvania now stand at 1,959, with 421 of those patients receiving care in intensive care units.

“The trend in the 14-day moving average number of hospitalized patients per day is about 3,600 lower than it was at the peak on Dec. 25. However, the current 14-day average is just below what it was at the height of the spring peak on May 3,” a press release from the DOH states.

Twenty-one new deaths were also reported during the daily update Monday at noon.

A total of 3,172,900 doses of both the Moderna and Pfizer-BioNTech COVID-19 vaccines have been allocated by the DOH since distribution began in December. This week, 225,890 first doses are expected to be allocated along with 180,610 second doses.

Pennsylvania remains in Phase 1A of its vaccine rollout, which includes all people aged 65 and older and younger residents with high-risk health conditions.

In Northumberland County, there have been 320 deaths related to COVID-19, the majority of which have occurred in residents of long term care facilities. The state reports Northumberland County has had 7,868 confirmed cases of COVID-19 since data tracking began last year.

On Monday, an additional six cases were announced in Northumberland County.

There are eight active cases of COVID-19 at Susquehanna University, five among students and three among employees.

At Bucknell University, there are 154 active cases of COVID-19, 149 of which are among students, according to the school’s website.

There are 174 active cases of COVID-19 at SCI-Coal Township, according to the Department of Corrections online dashboard. Of the active cases, 154 are among inmates.

Joe Darginski removes snow from a sidewalk in the 300 block of Main Street in Ranshaw Monday afternoon. After a wintery start to the work week, temperatures are expected to moderate to near 50 degrees on Wednesday.

Krystle Keeney of Shamokin shovels alongside her car on a snowy Monday morning that saw blizzard-like conditions in the city and surrounding area.

A lone pedestrian walks up a snow covered Race Street in Shamokin.

A man uses a shovel to clear away snow early Monday morning at Turkey Hill Minit Market at the intersection of Lincoln and Market streets in downtown Shamokin.

A couple, left, walks their dog as a vehicle passes by near the Sixth Street Bridge amid heavy snowfall Monday morning in Shamokin.

A quick-moving system Monday morning dumped 3 to 4 inches of snow in the Susquehanna Valley, leading to hazardous driving conditions and postponement of a drive-thru COVID-19 testing at Shikellamy State Park.

The latest round of wintery weather wreaked havoc with motorists as multiple accidents were reported throughout Northumberland County.

The Natalie Mountain between Sheetz at the intersection of state Routes 54 and 487 in Elysburg and Route 61 in Strong in Mount Carmel Township was shut down at about 11:30 a.m. due to the snowstorm. It reopened at about 2:45 p.m., according to Northumberland County Public Safety Director and Emergency Management Agency Coordinator Steve Jeffery.

In addition to local roads, accidents were reported on Interstates 81 and 80. Sleepy Hollow Road off Route 54 in Ralpho Township was the site of a crash and multiple vehicles including tractor-trailers became stuck in the snow and ice along Route 890, a mountainous road above Trevorton.

A crash Monday morning closed both lanes of Route 11 between the Route 11/15 split in Monroe Township, Snyder County, and Route 147 in Northumberland Borough, Northumberland County, as a result of an accident. The highway wasn’t reopened until about 3 p.m.

Monday’s snowfall also caused the postponement of a COVID-19 testing site at the Shikellamy State Park Marina. Testing is scheduled for 9 a.m. to 6 p.m. through Friday.

No appointment is necessary. Patients are asked to bring a photo ID and health insurance card. Patients are not required to show symptoms to be tested. The turnaround time for testing results is two to seven days after testing, according to the state Department of Health.

Snow started falling around 9 a.m. before tapering off at 1 p.m. A winter weather advisory expired at 2 p.m. as the heavy snow pushed east of the area.

Mount Carmel Mayor Philip Cimino expressed concern over snow piles that have grown in size as the winter continues.

“Some of those snow piles are sticking out 5 to 10 feet beside the cars,” the mayor said during Monday night’s council meeting. “If we could make the streets wider, because some of the primary streets are barely passable.”

Councilman Robert Barrett put most of the blame on contractors, noting that he has witnessed several pieces of equipment pushing piles “everywhere.”

Prior to Monday’s storm, Harrisburg measured 32.4 inches of snow this winter, about 10 inches above normal, according to the National Weather Service.

Pittsburgh, which averages 29.8 inches of snow, has already seen 54.6 inches, while Williamsport measured nearly 51 inches, more than double the average.

The National Weather Service says there will be a change this week away from the cold and unsettled weather pattern that the commonwealth has seen the last several weeks.

Wednesday looks to be the warmest day, about 50 degrees, with southerly flow ahead of a cold front arriving Thursday. The front will drop temperatures closer to the season norm of 40 degrees for Thursday and Friday.

There is a bit uncertainty, the National Weather Service said, into the weekend. There is likely to be some rain in the forecast depending on a couple of weather systems. 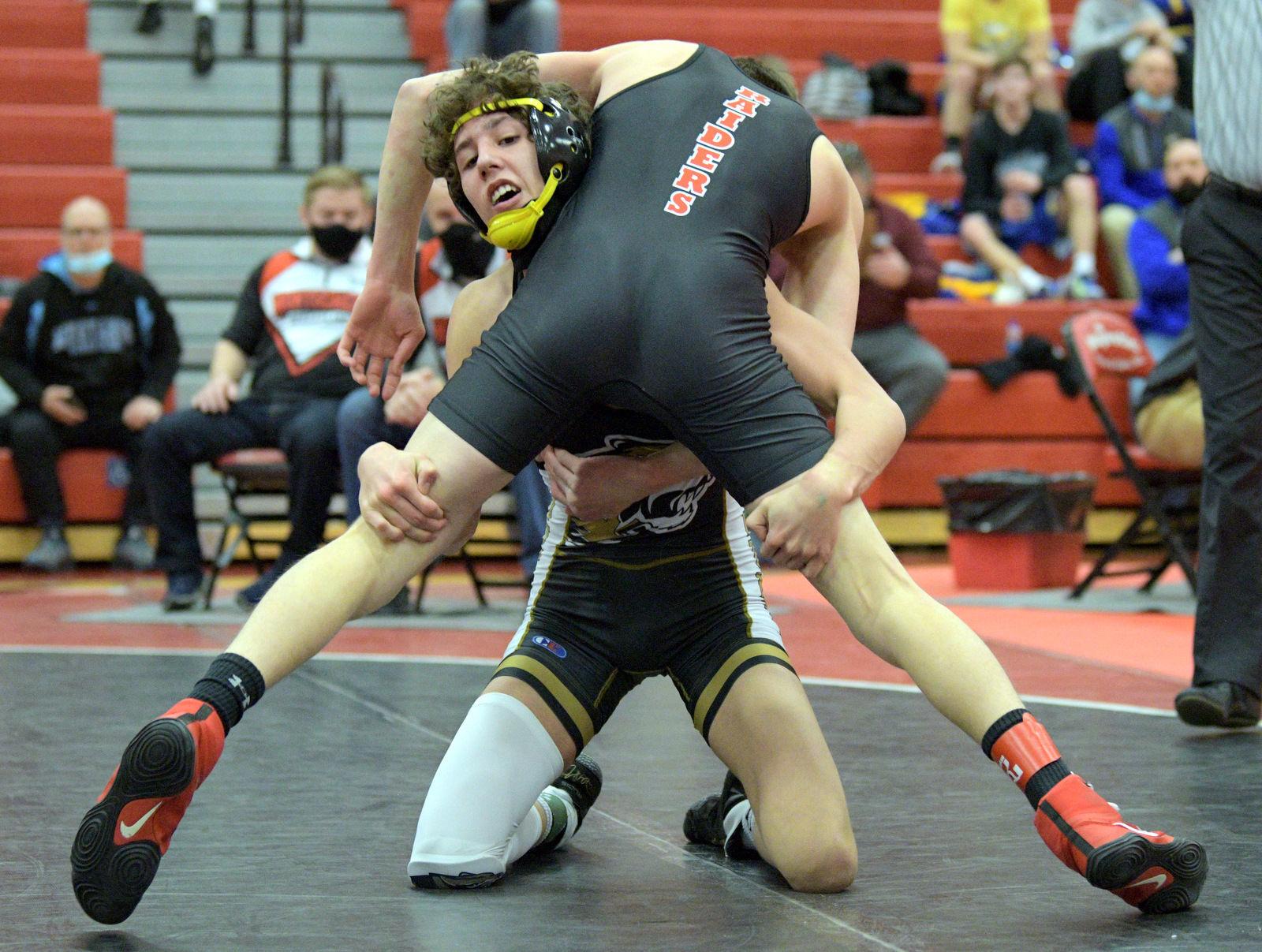 Southern Columbia’s Mason Barvitskie works for a takedown against Montgomery’s Caden Finck during the District 4 Class 2A wrestling tournament at Williamsport Saturday.

Council unanimously voted to hire the 49-year-old, who had previously served in the position from 2009 until 2015. He replaces John Bucanelli, who was terminated for an undisclosed reason in October after only four months on the job.

“I’m looking forward to working with you and see how you perform without a leash on,” Councilman Ed Fegley remarked following the vote.

Cuff was hired at a rate of $20.40 an hour, and will begin full-time duties in about two weeks.

“I’m happy to work with council again and get things going and moving in the right direction, just like when I was here before,” Cuff said following the meeting. “We have a lot going on right now with both buildings (police station and borough building) and everything else. But, I’ll get on board with council and see which direction we want to go.”

One of the first projects Cuff might oversee is the renovation of the new police department building. Council has entered into a contract with Heim Construction of Orwigsburg, Schuylkill County, for renovations of 30-34 W. Third St.

When asked by Councilman Clement Plisiewicz if the bid submitted by Heim Construction was reviewed, Solicitor Michael Smith replied that there was uncertainty whether the bid bond of 5% submitted by the contractor was the amount required by the request for proposals.

The bond, Smith said, would cover the borough if the cost of the project goes over the agreed upon price by 5%.

“You’re still way ahead of the game because the next bid was $50,000 more. So, to me, it’s almost irrelevant,” Smith informed council. “I don’t think that it’s a problem.”

Chief Chris Buhay noted that a representative of Heim Construction visited the site several times and took the most interest of all contractors.

In other business, council agreed to open the public swimming pool with the condition that guidelines pertaining to the pandemic are followed.

Fegley clarified, “It’s not an obligation to open it, it’s just saying as long as everything is optimal then we’ll open it.”

Shown in this photo is Father Angelo Geiger. Father Geiger has been assigned to serve as parochial vicar at Mother Cabrini Church in Shamokin.

SHAMOKIN — Father Angelo Geiger has been assigned to serve as parochial vicar at Mother Cabrini Church.

He replaces Father Stephen King, who has been reassigned to The Shrine of St. Anthony in Ellicott City, Maryland, to assist with various spiritual ministries. King, who served as parochial vicar since November 2019, began his new assignment last week.

Geiger, who arrived in Shamokin last week, is a native of Los Angeles, California. He joined the Franciscan Order in the Philippines in 1985 and was ordained a priest in 1991.

He assisted in establishing friaries of his community, where he served as general delegate and novice master.

The friar has lectured extensively on Marian theology and spirituality in the United States and abroad. His articles have been published in Inside the Vatican, which is the online edition of The Catholic World Report, and in a number of books from the Academy of the Immaculate.

The new parochial vicar is studying for a doctorate in theology at Catholic University of America and also is working on completing his doctoral thesis entitled “The Multiform Theories of Scripture in St. Bonaventure’s Collationes in Hexaemeron.”

Father Martin Kobos, pastor of Mother Cabrini Church, said, “It is a pleasure to welcome Father Angelo Geiger and his ministry to Mother Cabrini, Our Lady of Hope and St. Patrick parishes. He brings a wealth of experience, knowledge and Franciscan spirituality as he begins pastoral service to our area.”

The Supreme Court building in Washington. 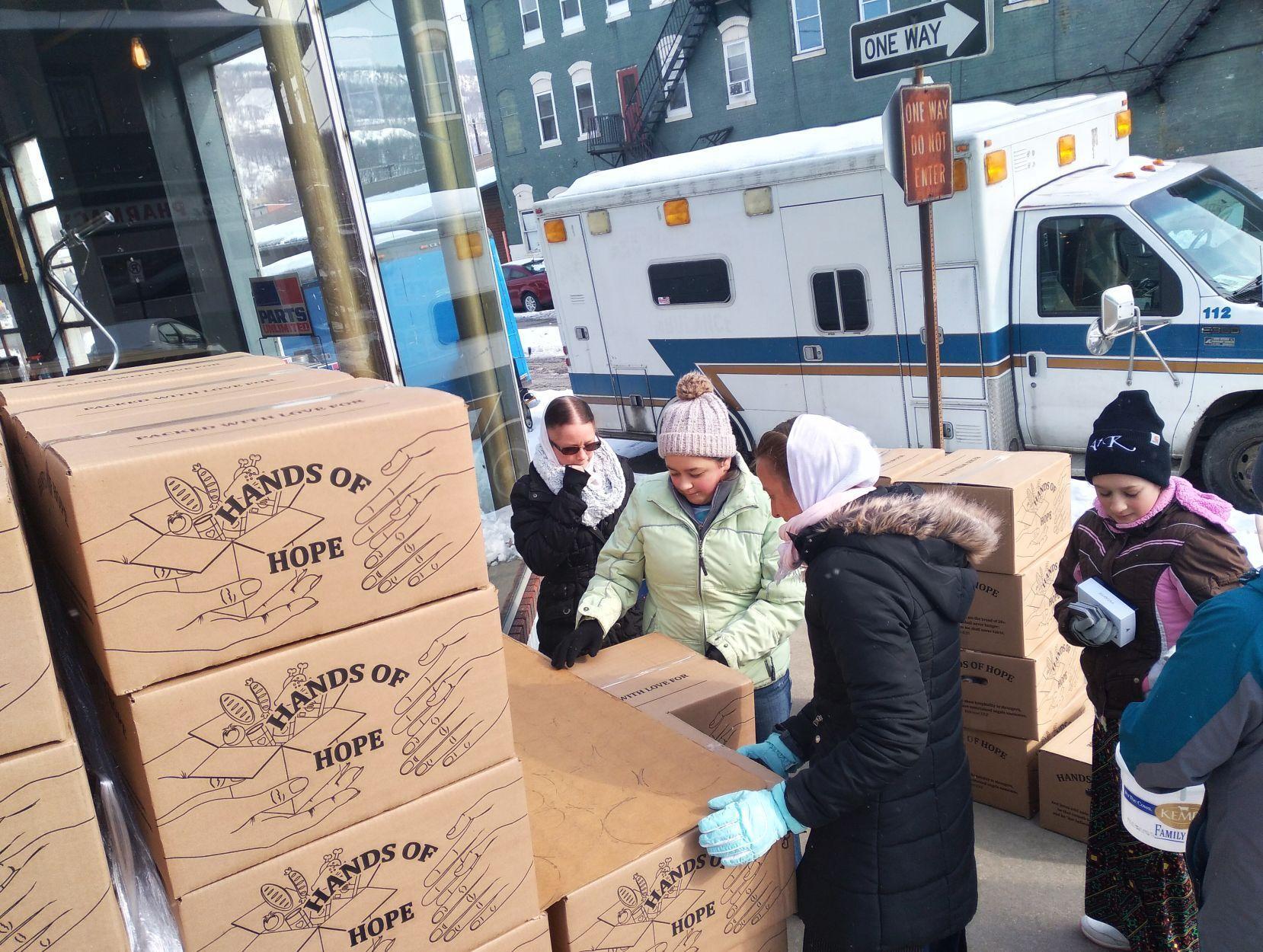 Volunteers unpack large pallets of food boxes outside Advancing the Kingdom on Spruce Street for a drive-by distribution to those in need Saturday morning in Shamokin.