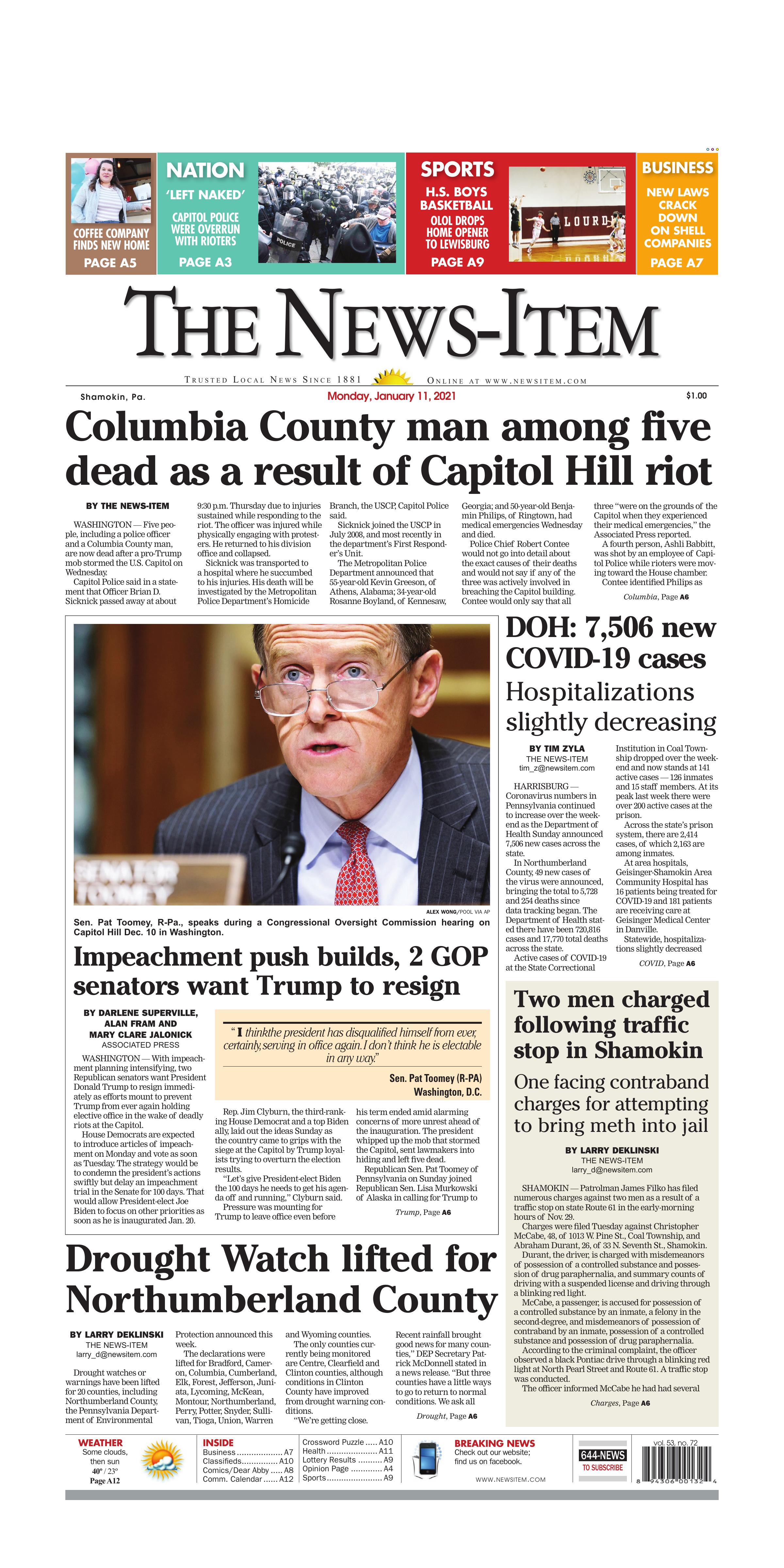 WASHINGTON — Five people, including a police officer and a Columbia County man, are now dead after a pro-Trump mob stormed the U.S. Capitol on Wednesday.

Capitol Police said in a statement that Officer Brian D. Sicknick passed away at about 9:30 p.m. Thursday due to injuries sustained while responding to the riot. The officer was injured while physically engaging with protesters. He returned to his division office and collapsed.

Sicknick was transported to a hospital where he succumbed to his injuries. His death will be investigated by the Metropolitan Police Department’s Homicide Branch, the USCP, Capitol Police said.

Sicknick joined the USCP in July 2008, and most recently in the department’s First Responder’s Unit.

Police Chief Robert Contee would not go into detail about the exact causes of their deaths and would not say if any of the three was actively involved in breaching the Capitol building. Contee would only say that all three “were on the grounds of the Capitol when they experienced their medical emergencies,” the Associated Press reported.

A fourth person, Ashli Babbitt, was shot by an employee of Capitol Police while rioters were moving toward the House chamber.

Contee identified Philips as from Ringtown, Schuylkill County, but is actually a resident of nearby Columbia County. He was the founder of a pro-Trump social media site called Trumparoo and had coordinated transportation for several dozen people from Pennsylvania to Washington.

The website was inactive Friday, but an archive of the site from this week showed that Phillips described it as a social network where “American Patriots can mobilize against the corrupt communist marxist scummy Democrats.”

Philips had organized a caravan from West Main Street in Bloomsburg with stops at Harrisburg and York while en route to Washington to “fight for Trump.” The caravan included at least three passenger vans.

The Philadelphia Inquirer reported that Philips drove there in a van along with Trump-related memorabilia he had produced. The Inquirer and the Bloomsburg Press Enterprise both spoke with Phillips before the rally.

The Inquirer said that members of his group say they last saw Philips around 10:30 a.m. Wednesday, and that he did not show up to meet them for a 6 p.m. departure. They learned from police that he had died and had a somber ride back to Pennsylvania.

Philips told the Press Enterprise on Tuesday that people from other states were staying at his home. He said, “My ‘hostel’ is already full.”

Drought watches or warnings have been lifted for 20 counties, including Northumberland County, the Pennsylvania Department of Environmental Protection announced this week.

The only counties currently being monitored are Centre, Clearfield and Clinton counties, although conditions in Clinton County have improved from drought warning conditions.

“We’re getting close. Recent rainfall brought good news for many counties,” DEP Secretary Patrick McDonnell stated in a news release. “But three counties have a little ways to go to return to normal conditions. We ask all water consumers on drought watch to remain mindful and continue to reduce their water use a modest amount.”

According to the National Weather Service, drought coverage in Pennsylvania decreased from 75.36% to 11.07% in the last three months following copious amounts of rain and snow.

The agency released a map that showed portions of Northumberland County received 150 to 200% above normal precipitation between Dec. 8 and Jan. 7 while some areas of the northern tier saw 200 to 300%. 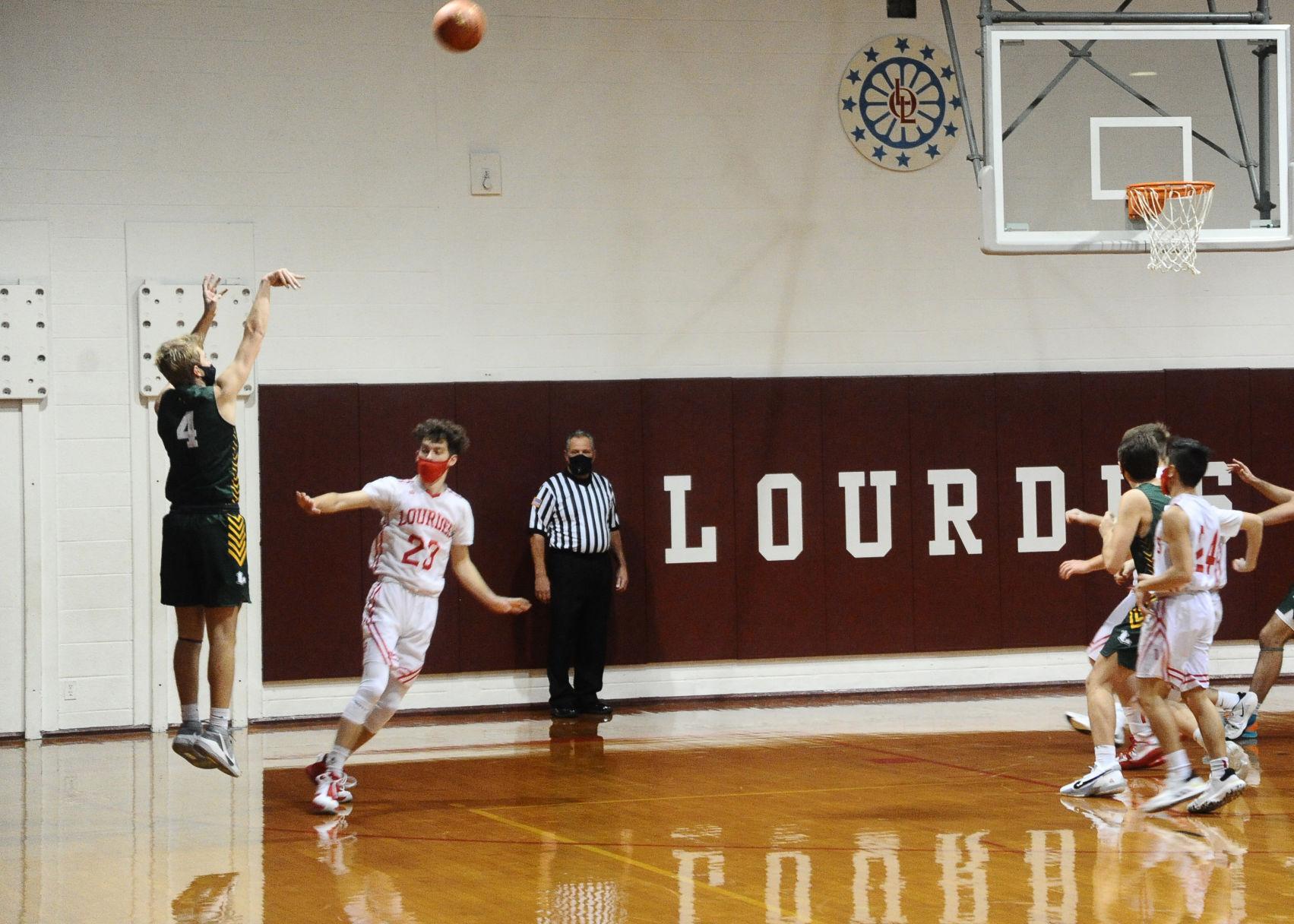 HARRISBURG — Coronavirus numbers in Pennsylvania continued to increase over the weekend as the Department of Health Sunday announced 7,506 new cases across the state.

In Northumberland County, 49 new cases of the virus were announced, bringing the total to 5,728 and 254 deaths since data tracking began. The Department of Health stated there have been 720,816 cases and 17,770 total deaths across the state.

Active cases of COVID-19 at the State Correctional Institution in Coal Township dropped over the weekend and now stands at 141 active cases — 126 inmates and 15 staff members. At its peak last week there were over 200 active cases at the prison.

At area hospitals, Geisinger-Shamokin Area Community Hospital has 16 patients being treated for COVID-19 and 181 patients are receiving care at Geisinger Medical Center in Danville.

Statewide, hospitalizations slightly decreased on Sunday to a total of 5,201 patients currently being treated for COVID-19, 1,062 of which are in the ICU and 640 are on ventilators.

Health care workers across the state recently began receiving the second doses of the Pfizer-BioNTech vaccine, according to information released by the Department of Health. The Pfizer vaccine requires three weeks to lapse before administering the second dose.

In Northumberland County, 2,536 have received the first shot of a vaccine and 245 have been fully vaccinated. The Moderna vaccine, which received FDA approval a week after its Pfizer counterpart, requires four full weeks to pass before second doses are administered.

SHAMOKIN — Patrolman James Filko has filed numerous charges against two men as a result of a traffic stop on state Route 61 in the early-morning hours of Nov. 29.

Durant, the driver, is charged with misdemeanors of possession of a controlled substance and possession of drug paraphernalia, and summary counts of driving with a suspended license and driving through a blinking red light.

According to the criminal complaint, the officer observed a black Pontiac drive through a blinking red light at North Pearl Street and Route 61. A traffic stop was conducted.

The officer informed McCabe he had had several active warrants. McCabe placed his hands inside in his pockets while following a command to exit the vehicle. He attempted to hide a syringe under the seat, but it dropped onto the floor. McCabe was then informed he would sent to Northumberland County Jail on the unrelated warrants, the complaint states.

An assisting officer searched McCabe’s person. He located a cigarette carton with a 8 mg Buprenorphine Hydrochloride and Naloxone Hydrochloride pill, according to the complaint.

Filko observed another syringe jammed between a back seat and the floor. Durant claimed there was nothing illegal in the vehicle.

A further search of the vehicle revealed a pouch containing methamphetamine on the front seat. Durant claimed the pouch belonged to a woman that had been in the car earlier in the day. Two other passengers in the vehicle denied ownership of the drugs.

Durant and the two other passengers were released. The officers then transported McCabe to Northumberland County Jail. McCabe told officers he had nothing illegal. He was then handed over to jail staff. 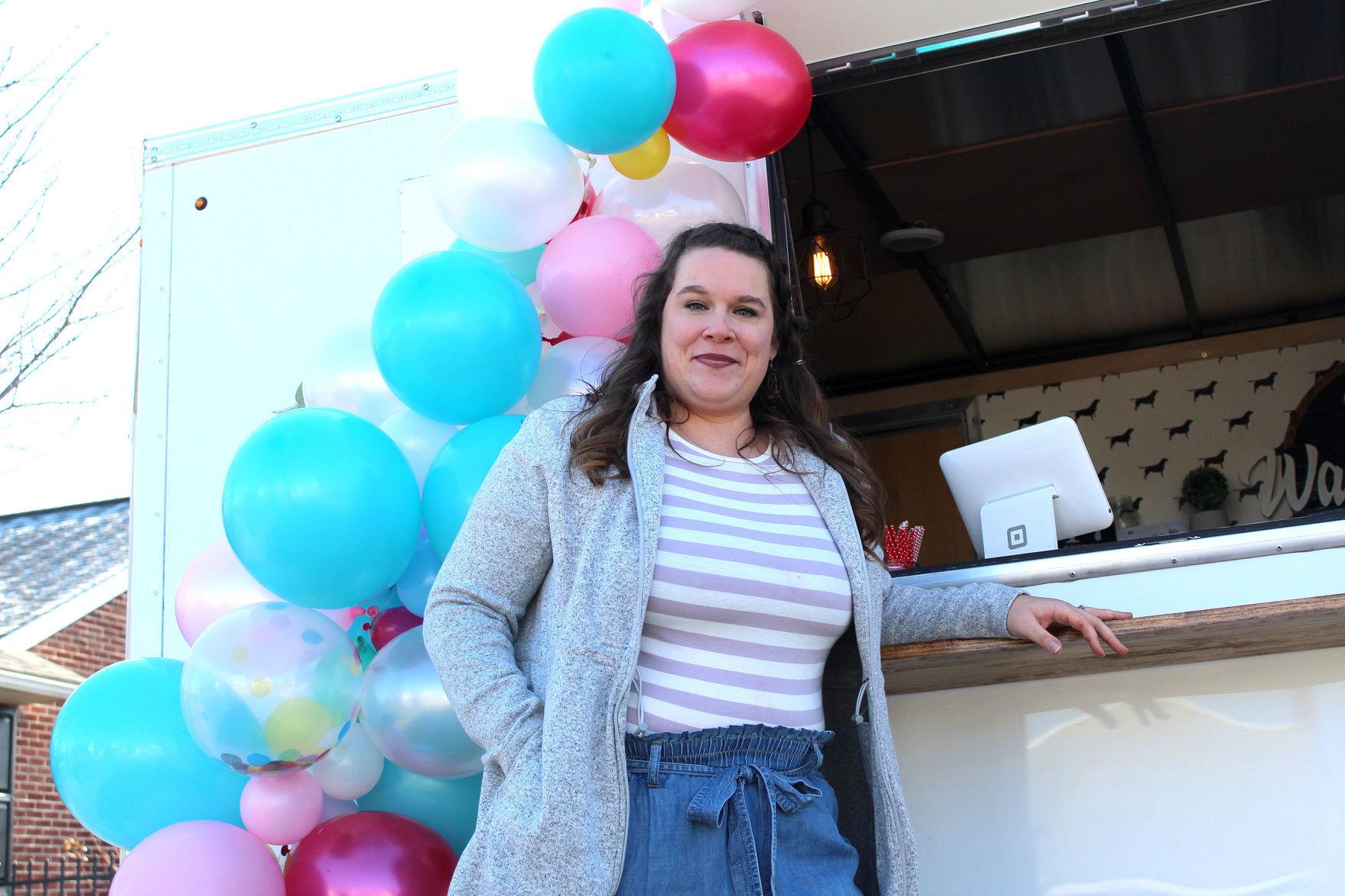 Meghan Solomon has announced that Wagging Tail Coffee Co., the business founded by she and her husband Eric, will be opening a permanent location by the summer.