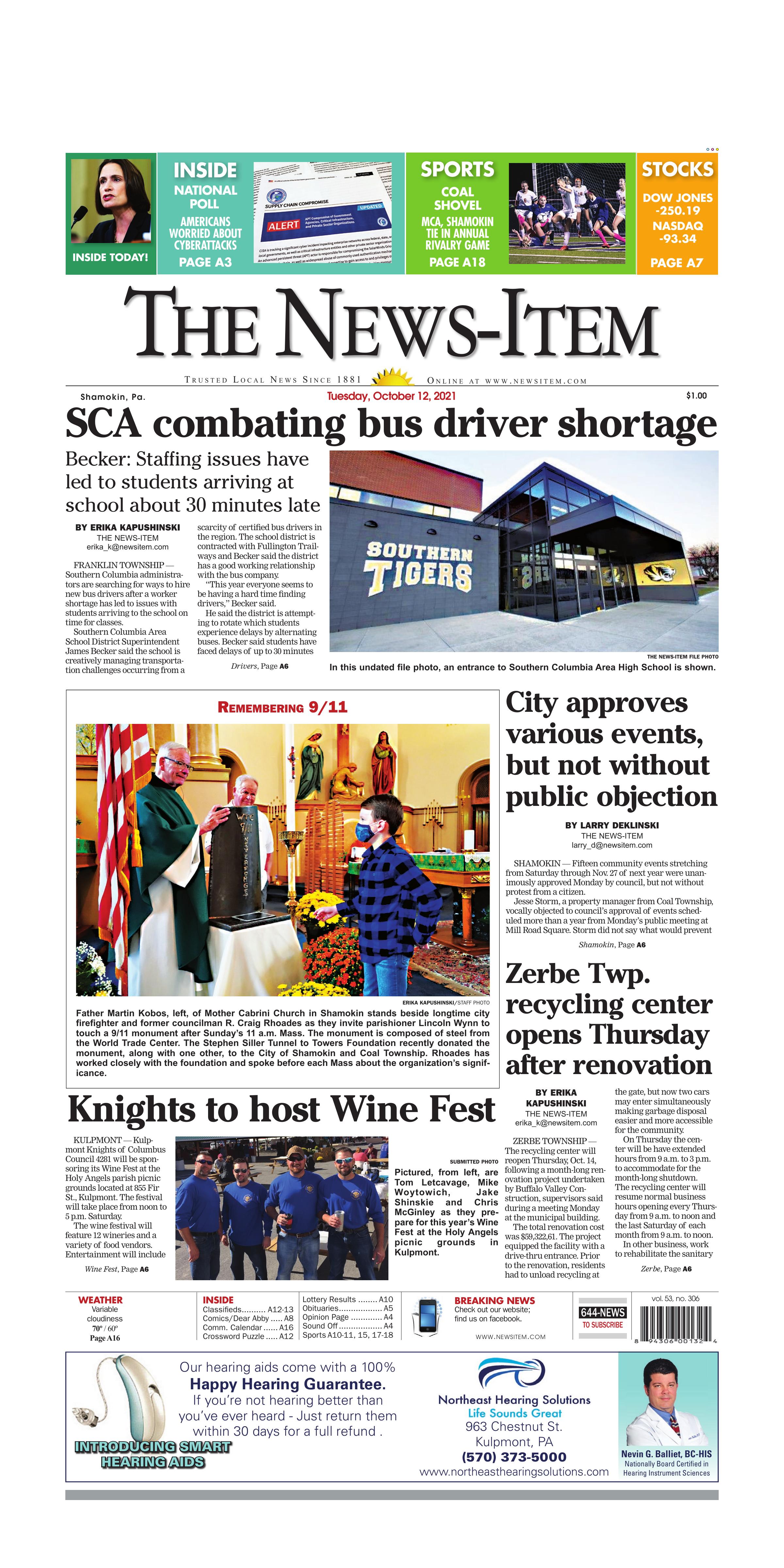 FRANKLIN TOWNSHIP — Southern Columbia administrators are searching for ways to hire new bus drivers after a worker shortage has led to issues with students arriving to the school on time for classes.

Southern Columbia Area School District Superintendent James Becker said the school is creatively managing transportation challenges occurring from a scarcity of certified bus drivers in the region. The school district is contracted with Fullington Trailways and Becker said the district has a good working relationship with the bus company.

“This year everyone seems to be having a hard time finding drivers,” Becker said.

He said the district is attempting to rotate which students experience delays by alternating buses. Becker said students have faced delays of up to 30 minutes 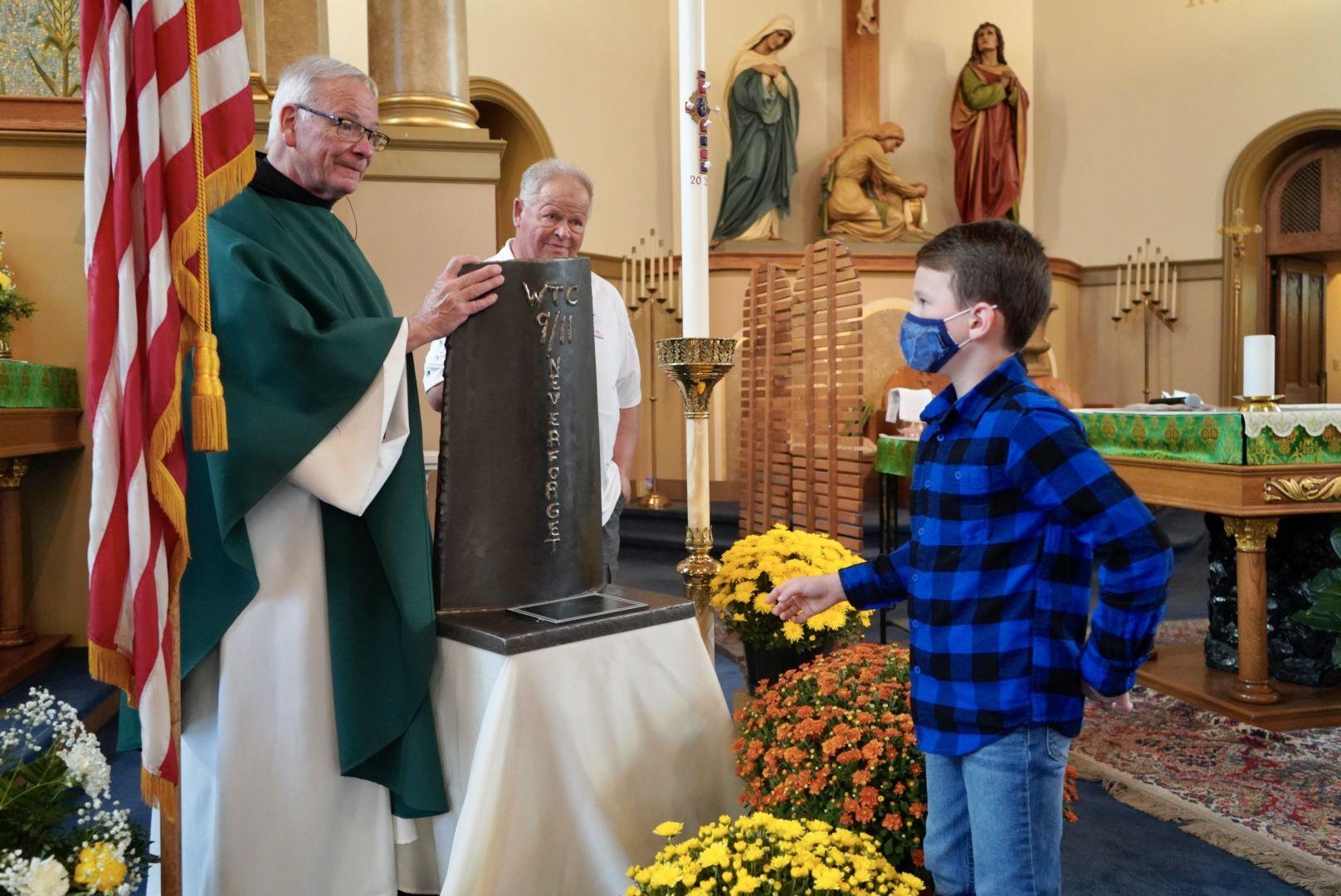 Father Martin Kobos, left, of Mother Cabrini Church in Shamokin stands beside longtime city firefighter and former councilman R. Craig Rhoades as they invite parishioner Lincoln Wynn to touch a 9/11 monument after Sunday’s 11 a.m. Mass. The monument is composed of steel from the World Trade Center. The Stephen Siller Tunnel to Towers Foundation recently donated the monument, along with one other, to the City of Shamokin and Coal Township. Rhoades has worked closely with the foundation and spoke before each Mass about the organization’s significance.

Pictured, from left, are Tom Letcavage, Mike Woytowich, Jake Shinskie and Chris McGinley as they prepare for this year’s Wine Fest at the Holy Angels picnic grounds in Kulpmont.

KULPMONT — Kulpmont Knights of Columbus Council 4281 will be sponsoring its Wine Fest at the Holy Angels parish picnic grounds located at 855 Fir St., Kulpmont. The festival will take place from noon to 5 p.m. Saturday.

The wine festival will feature 12 wineries and a variety of food vendors. Entertainment will include a live music performance provided by local band Looker.

Tickets cost $20 presale or $25 at the door. VIP tickets are $30 each and include early entry onto the grounds, an event T-shirt and a wine glass. Tickets can be purchased at the Holy Angels Parish rectory by calling 570-373-1221.

Tickets can also be purchased at local Kulpmont businesses including Scicchitano’s Pizza, Archie’s Shoe Store, Shimock’s Furniture, Beyond Beauty by Rose Thompson and the Difference by Colleen. VIP tickets are available for purchase through Scicchitano’s Pizza and Catino Vino located in Mount Carmel.

Designated drivers will be admitted for $7 each and will not be provided wine glasses. Individuals under the age of 21 will not be permitted entry and outside food, drink and pets are prohibited.

There are sponsorship opportunities for individuals, small businesses and large corporations. For more information about regarding donations to the cause, email Shin4338@outlook.com or call Dave Shinskie at 570-205-3004.

In prior years, Kulpmont Knights donated a portion of proceeds to support the Ronald McDonald House of Danville and MCA ThinkBIG, which raises money for pediatric cancer victims treated at Janet Weis Children’s Hospital, Danville. 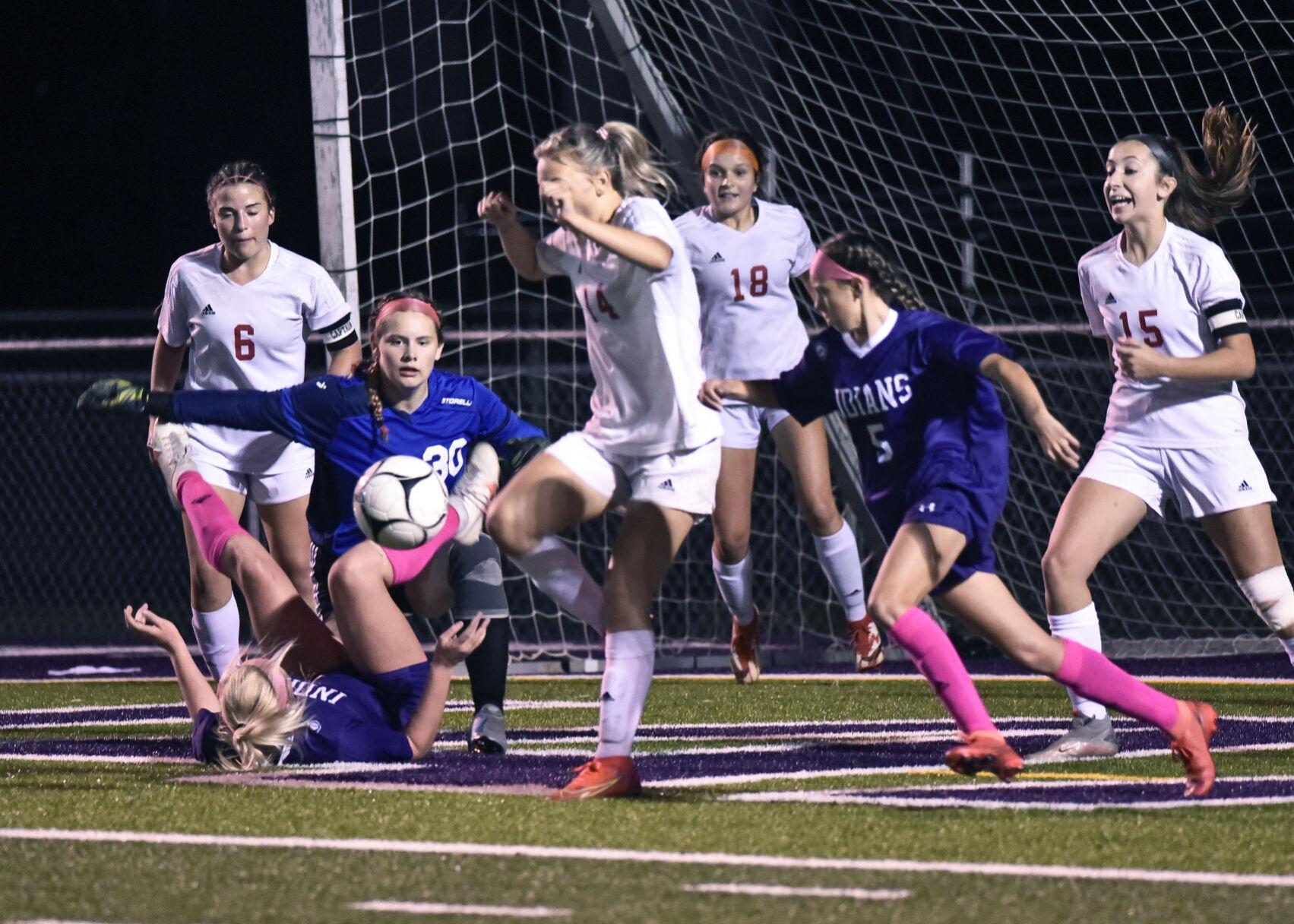 The ball bounces near the Mount Carmel net as Shamokin threatens during the annual Coal Shovel game Saturday at Kemp Memorial Stadium. The teams played to a 5-5 following 100 minutes of play.

SHAMOKIN — Fifteen community events stretching from Saturday through Nov. 27 of next year were unanimously approved Monday by council, but not without protest from a citizen.

Jesse Storm, a property manager from Coal Township, vocally objected to council’s approval of events scheduled more than a year from Monday’s public meeting at Mill Road Square. Storm did not say what would prevent council from accepting the events although he spoke about unrelated topics at the beginning and conclusion of the meeting.

His displeasure followed Administrator Robert Slaby reading correspondence from council candidate Joseph Leschinskie, who requested events proposed beyond February 2022 be tabled. Leschinskie claimed members of next year’s council should have the say in what events in 2022 are approved.

Councilman Charlie Verano, who is not defending his position on council in the upcoming general election, asked city solicitor Frank Konopka whether a future council member could change city business, to which he replied that council members can make a motion during voting meetings.

Storm also questioned Konopka’s remarks that the public may only comment on topics that are or have been added to a meeting agenda.

Citing the state’s Sunshine Act, Konopka opened the meeting by stating the public has the right to comment on issues “that are or may be before the board,” adding that council is not required to respond to comments and may establish rules to oversee public comment, for example, limiting the time for each commenter.

When asked following the meeting whether the city has taken the position that residents could only comment on agenda items, Konopka said the city may change the requirement.

Storm also requested that an agenda item dealing with the second and final reading of Ordinance 21-06, also known as the “City of Shamokin Trailer, Commercial and Recreation Vehicle Parking” ordinance, be removed because it was not publicly displayed for the required 30 days. Council obliged after Slaby said the ordinance had been displayed for 26 days.

• A feasibility study for a proposed non-motorized trail from Sunbury to Mount Carmel is nearly complete. Public meetings to discuss the 26-mile trail will be conducted 5 p.m. Tuesday, Oct. 26, at the Northumberland County Career and Arts Center in Shamokin; and 5 p.m. Wednesday, Oct. 27, at the Northumberland County Administration Building in Sunbury. SEDA-COG revitalization coordinator Betsy Kramer said the date of the Shamokin meeting may change because it conflicts with the Halloween parade.

• Councilwoman Jennifer Seidel announced that resident Judy Allen donated $150 toward the cost of candy for the upcoming Halloween parade, which is scheduled for 6 p.m. Oct. 26. Registration at Claude Kehler Community Park begins at 4:30 p.m. Online registration is also available.

Mayor John Brown said candy is allowed to be thrown during the parade, but asked participates to refrain from throwing candy from a vehicle. A pep rally in support of the Shamokin Area High School football team will be conducted following the parade at the municipal lot at Rock and Independence streets.

• A hydrologic and hydraulic study, funded through a $130,000 grant, is expected to be completed by spring. The study, done in response to FEMA proposing the expansion of the flood zone within the city, will investigate the movement of water through select portions of the city.

• A grant application was sent to the Environmental Protection Agency on Oct. 28 for $300,000 that Kramer said would assist with development projects in the brownfield areas of the city. The grant, she said, would build upon a Department of Environmental Small Technical Assistance grant (completed in 2020) to inventory, educate and plan for brownfield properties.

Kramer said the abandoned buildings along Independence Street should be removed “the next couple of months” and that bidding documents have already been prepared. The park, she continued, should take shape this spring and the project must be completed by the end of next year.

The total renovation cost was $59,322,61. The project equipped the facility with a drive-thru entrance. Prior to the renovation, residents had to unload recycling at the gate, but now two cars may enter simultaneously making disposal easier and more accessible for the community.

In other business, work to rehabilitate the sanitary system in the township’s west end is set to begin today. The project will include 2,436 linear feet of cured-in-place pipe liners, as well as cleaning and rooting of the sewer lines to reduce inflow and infiltration. Funding for the project was provided by the state Small Water and Sewer Program and the total cost for the initiative was $147,459.

Supervisors have obtained a credit card from M&T Bank with a credit limit of $20,000 to make internet transactions more convenient for the township.

A motion to approve the hiring of Jody Patton as a full-time administrative assistant at an hourly rate of $13.50 was approved by Supervisors Michael Schwartz and Judith Korenkiewicz. Absent from the meeting was Daniel Billing, who recently resigned from the board.

Supervisors are pleased to announce that the township received $6,742.21 in Commonwealth state aid allocation supporting the Volunteer Fire Relief Association.

Supervisors will hold their next meeting 6 p.m. Monday, Nov. 8.

(This story has been updated to show that Billing has resigned from the board.)