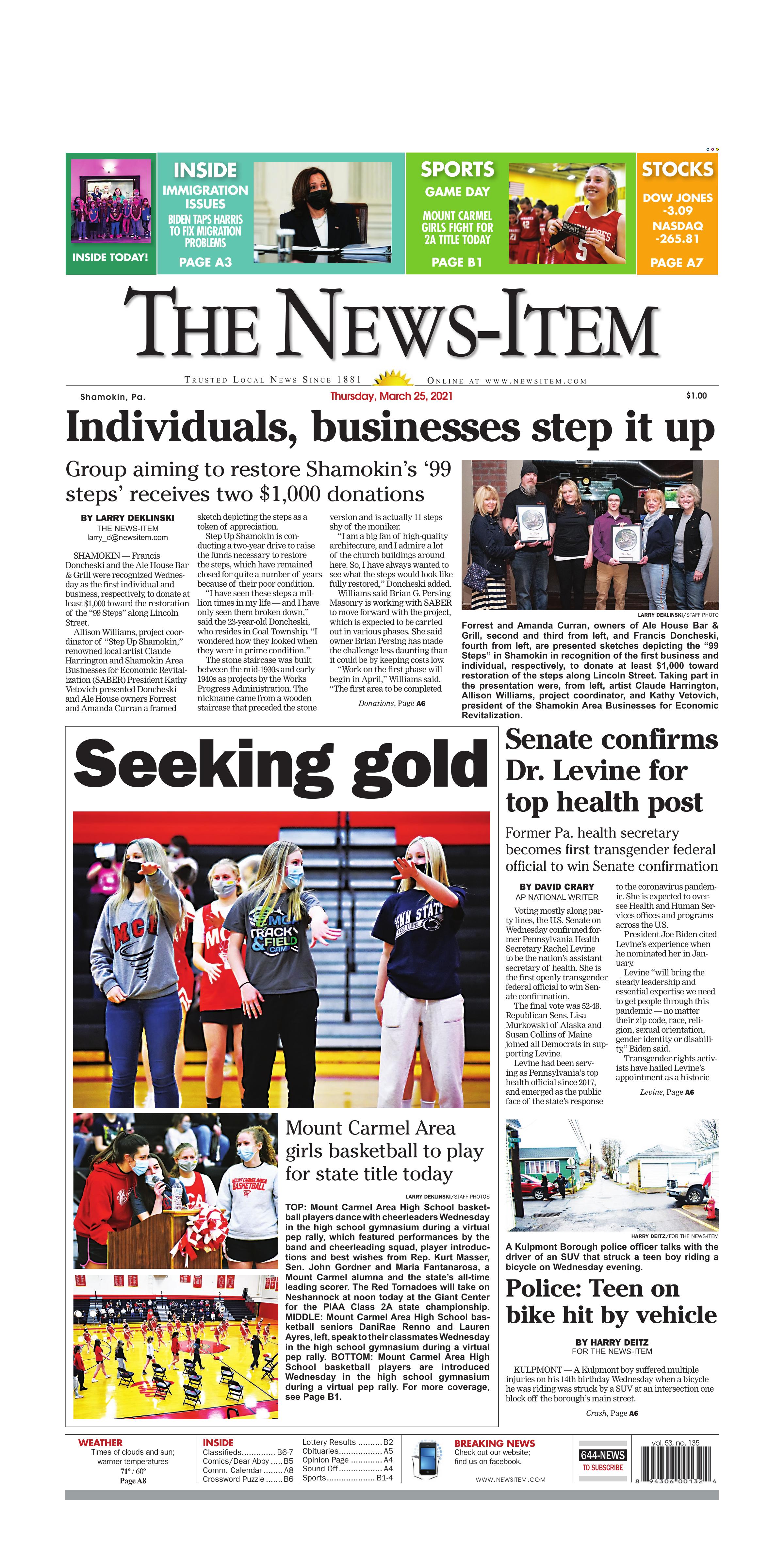 Forrest and Amanda Curran, owners of Ale House Bar & Grill, second and third from left, and Francis Doncheski, fourth from left, are presented sketches depicting the “99 Steps” in Shamokin in recognition of the first business and individual, respectively, to donate at least $1,000 toward restoration of the steps along Lincoln Street. Taking part in the presentation were, from left, artist Claude Harrington, Allison Williams, project coordinator, and Kathy Vetovich, president of the Shamokin Area Businesses for Economic Revitalization.

SHAMOKIN — Francis Doncheski and the Ale House Bar & Grill were recognized Wednesday as the first individual and business, respectively, to donate at least $1,000 toward the restoration of the “99 Steps” along Lincoln Street.

Step Up Shamokin is conducting a two-year drive to raise the funds necessary to restore the steps, which have remained closed for quite a number of years because of their poor condition.

“I have seen these steps a million times in my life — and I have only seen them broken down,” said the 23-year-old Doncheski, who resides in Coal Township. “I wondered how they looked when they were in prime condition.”

The stone staircase was built between the mid-1930s and early 1940s as projects by the Works Progress Administration. The nickname came from a wooden staircase that preceded the stone version and is actually 11 steps shy of the moniker.

“I am a big fan of high-quality architecture, and I admire a lot of the church buildings around here. So, I have always wanted to see what the steps would look like fully restored,” Doncheski added.

Williams said Brian G. Persing Masonry is working with SABER to move forward with the project, which is expected to be carried out in various phases. She said owner Brian Persing has made the challenge less daunting than it could be by keeping costs low.

“Work on the first phase will begin in April,” Williams said. “The first area to be completed will be from the foot of the 99 Steps at Lincoln Street to the landing that turns to the right.”

Vetovich said SABER is fronting the money to start the project and encouraged the public to continue to support the project through donations. She added that the job is large and continued commitment by the community and those who were impacted by Shamokin, but living elsewhere, are necessary.

Forrest Curran, who is also a vice president of SABER, recalled a point in time when he traveled up and down the steps on a regular basis.

“I’ve always been all about Shamokin. So, it’s something I want to see get done. I was kind of bummed when we didn’t get the grant for it, so it was a no-brainer,” he said, referring to an application for funds submitted about two years ago. “Any improvement we do in the town is going to help. (When) the town starts showing pride, people start showing pride.”

Williams said donors who contribute $1,000 or more during the two-year period will be honored with a paver placed in new concrete pavements at the foot of the 99 Steps. The business, individual or group name must be identified in the memo section of a check or by reaching out via Messenger when using the QR Code to donate.

Donations can be made via check or money order, which should be addressed to SABER, 150 E. Lincoln St.

Other endeavors to raise funds include sales from an upcoming cookbook featuring family-favorite recipes, a chicken barbecue and prints depicting the 99 Steps.

The prints, of which Harrington only made 200, are available both framed and unframed in 8x10 and 11x14 sizes. They will be available at Step Up Shamokin’s booth at Saturday’s “Shamokin Warms My Heart” event on Arch Street. For more information, email bodenelsa@gmail.com.

Williams said that once the 99 Steps are restored, the eight remaining sets of steps throughout the community will be considered for restoration.

“The vitality in Shamokin is palpable. The improvements and pride are visible,” she said. “Quoting an old license plate, ‘Shamokin is a great place to live!’” 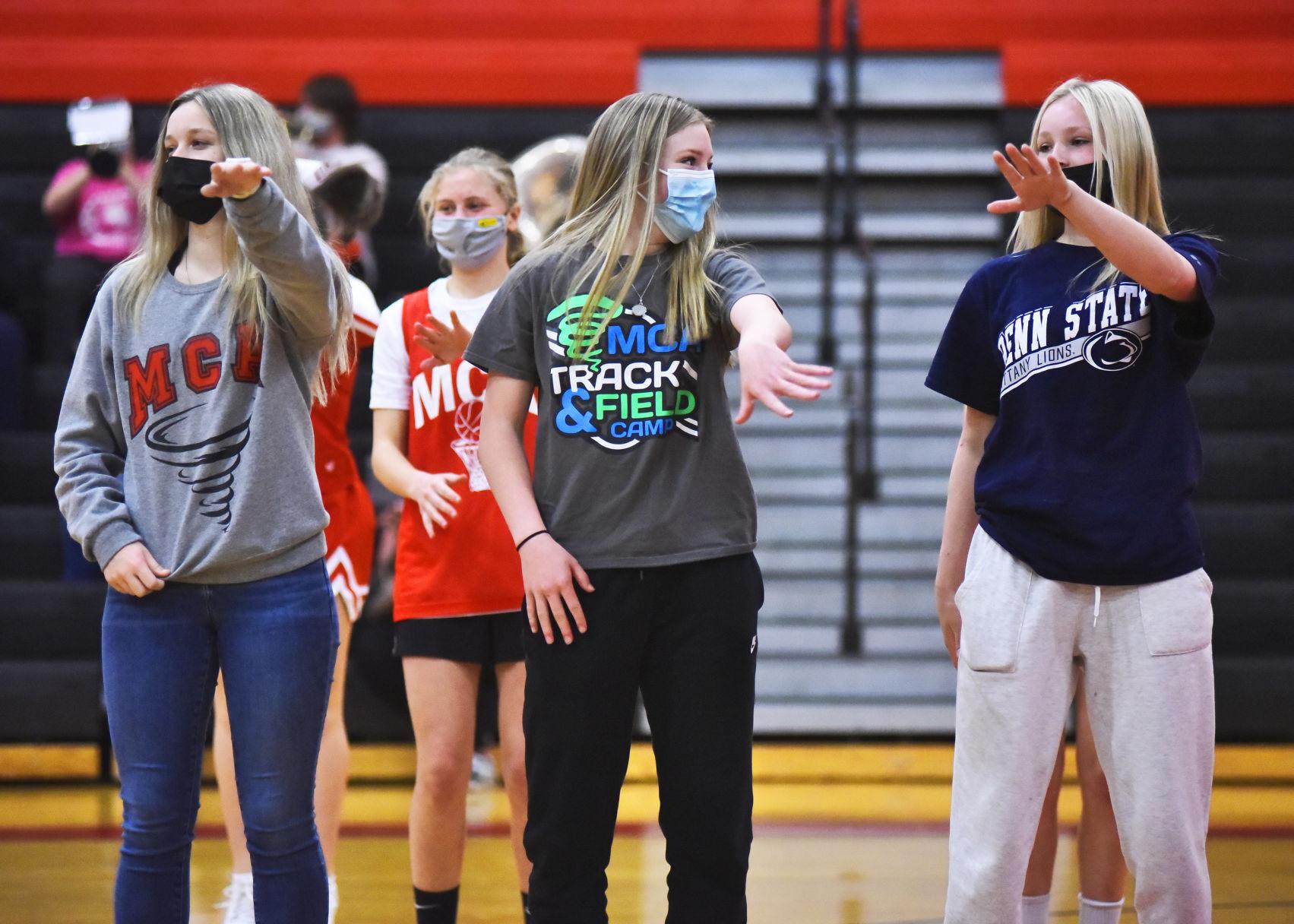 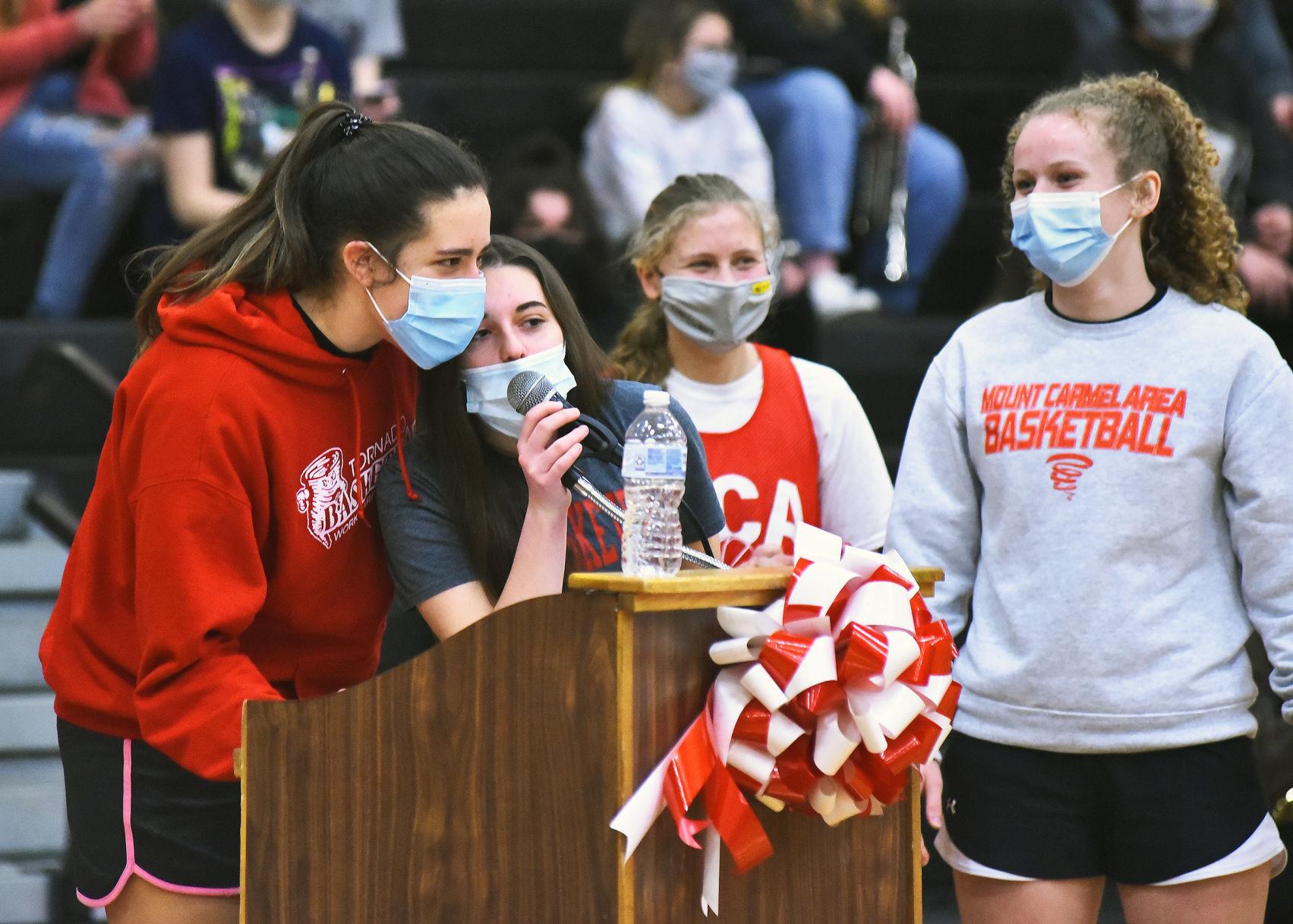 Mount Carmel Area High School basketball seniors DaniRae Renno and Lauren Ayres, left, speak to their classmates Wednesday in the high school gymnasium during a virtual pep rally, which featured performances by the band and cheerleading squad, player introductions and best wishes from Rep. Kurt Masser, Sen. John Gordner and Maria Fantanarosa, a Mount Carmel alumna and the state’s all-time leading scorer. The Red Tornadoes will take on Neshannock noon today at the Giant Center for the PIAA Class 2A state championship. 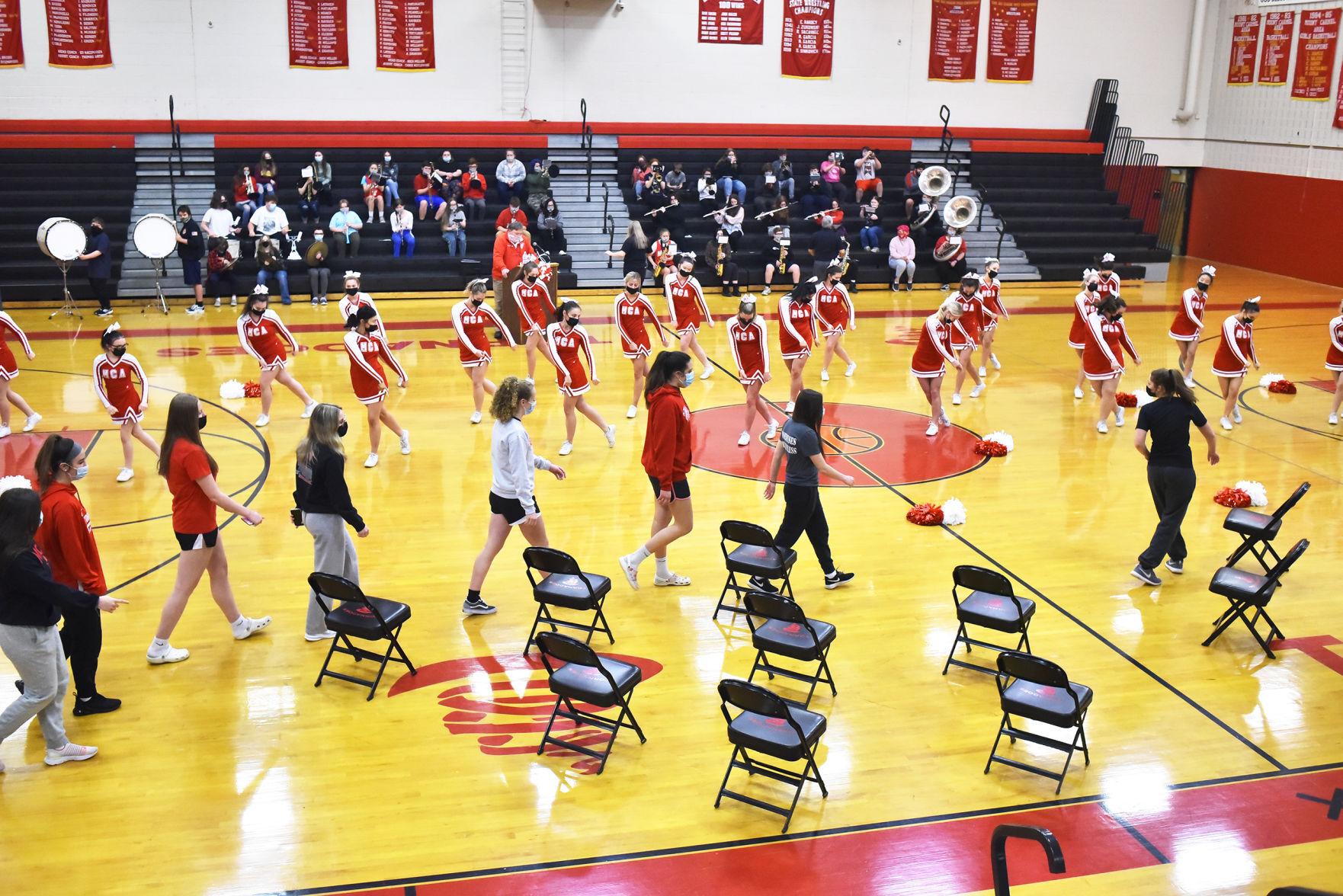 Mount Carmel Area High School basketball players are introduced Wednesday in the high school gymnasium during a virtual pep rally, which featured performances by the band and cheerleading squad, player introductions and best wishes from Rep. Kurt Masser, Sen. John Gordner and Maria Fantanarosa, a Mount Carmel alumna and the state’s all-time leading scorer. The Red Tornadoes will take on Neshannock noon today at the Giant Center for the PIAA Class 2A state championship. 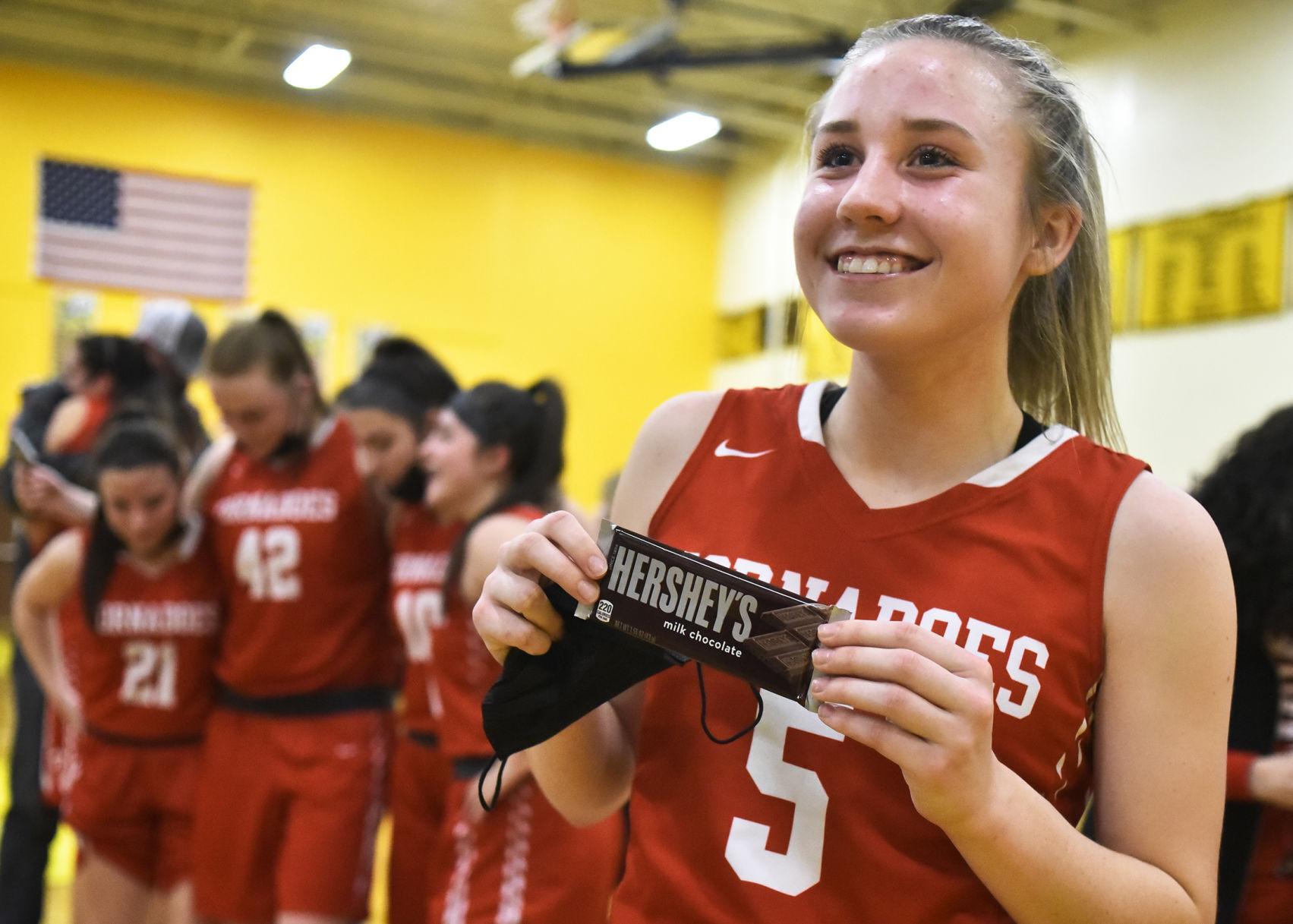 Mount Carmel basketball player Mia Chapman has her photo taken with a Hershey’s chocolate bar following the team’s victory over Mahanoy Area in the PIAA Class 2A semifinals Monday night at Mahanoy. The Red Tornadoes will play Neshannock noon Thursday at the Giant Center for the state championship.

A Kulpmont Borough police officer talks with the driver of an SUV that struck a teen boy riding a bicycle on Wednesday evening.

KULPMONT — A Kulpmont boy suffered multiple injuries on his 14th birthday Wednesday when a bicycle he was riding was struck by a SUV at an intersection one block off the borough’s main street.

Borough police said the boy was taken by AREA Services Ambulance to Geisinger Medical Center, Danville, where he was treated for injuries to his face and scalp, following the accident shortly before 5 p.m. at the intersection Oak and 14th streets.

Police said no charges would be filed against the driver of the SUV.

According to information obtained at the scene, the boy was riding his bicycle west on Oak Street and went through a stop sign at what is called a blind intersection at 14th Street. The SUV was traveling north on 14th Street, and the driver failed to see the child entering the intersection. The left front of the SUV struck the bicycle broadside.

Responding with emergency medical technicians from AREA Services and Kulpmont police were two units from the Kulpmont Fire Department. 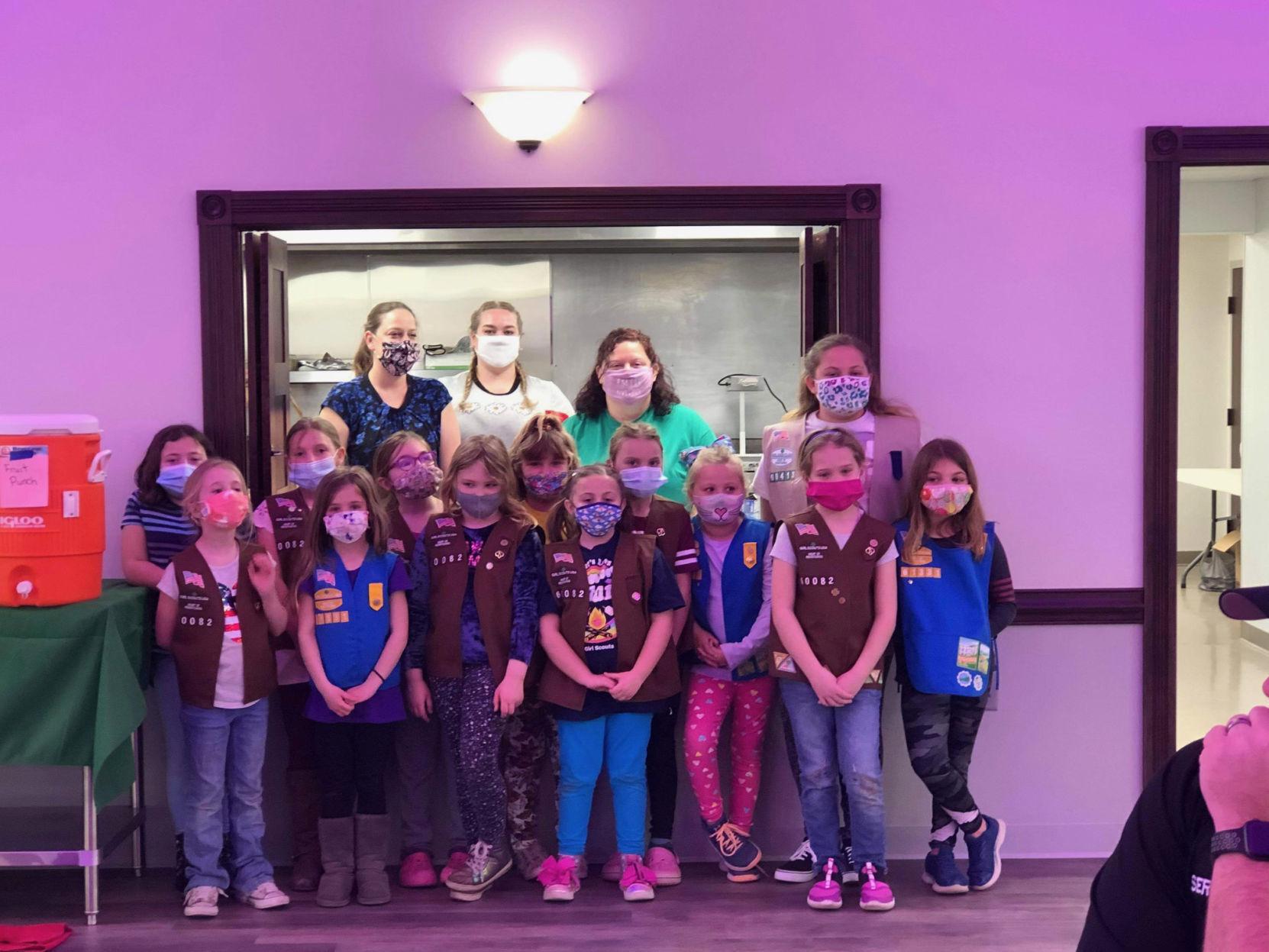 Elysburg Daisy Troop 61331 and Brownie Troop 60082 hosted a spaghetti dinner Sunday for their parents and fire chiefs from Elysburg. The girls prepared and served the meal, which included food donated from several area businesses.