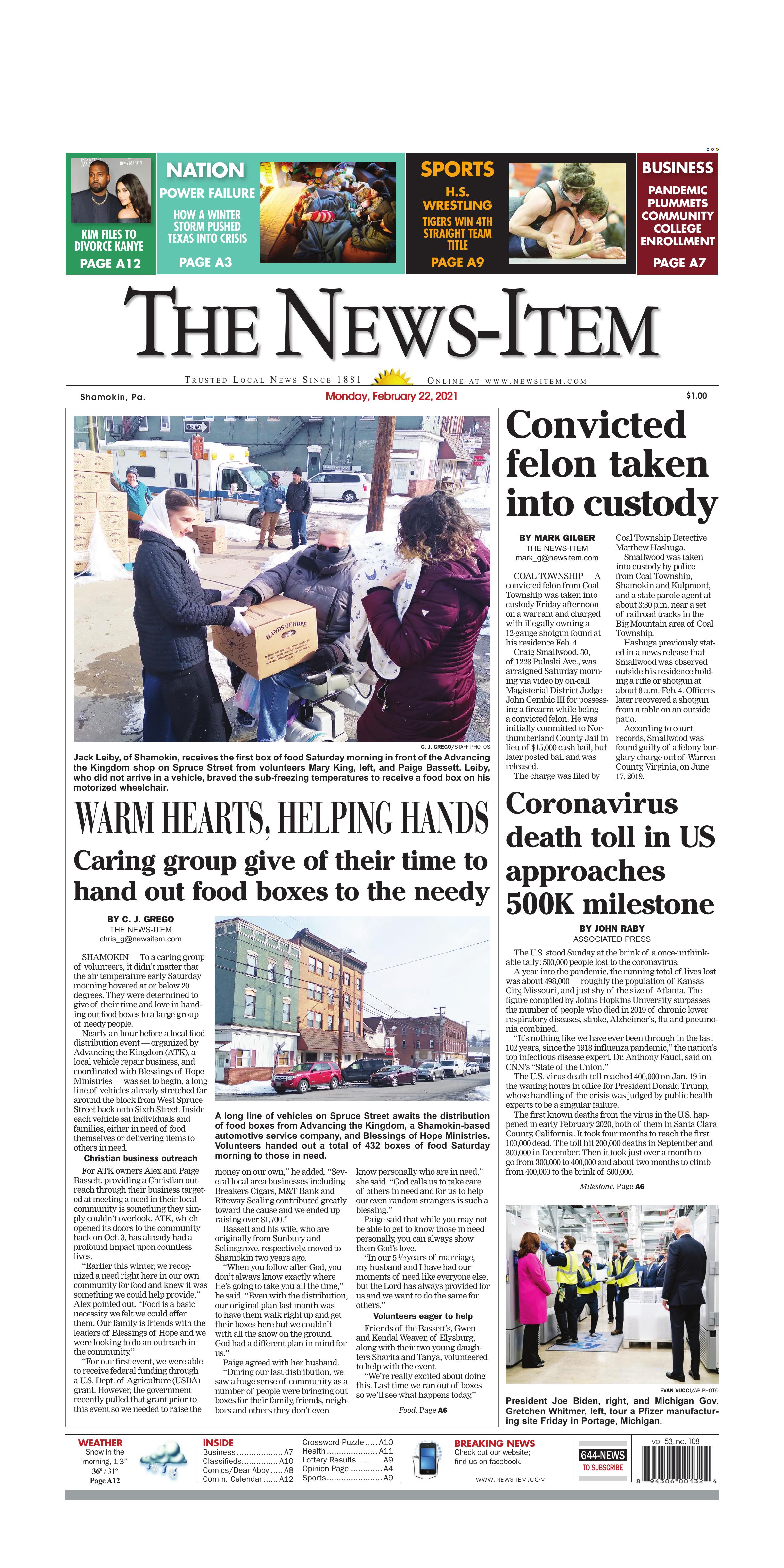 FILE — In this Feb. 15, 2021, file photo, Dan Bryant and his wife Anna huddle by the fire with sons Benny, 3, and Sam, 12 weeks, along with their dog Joey, also wearing two doggie sweaters, with power out and temperatures dropping inside their home after a winter storm brought snow and freezing temperatures to North Texas in Garland, Texas. (Smiley N. Pool/The Dallas Morning News via AP, File)

Volunteers unpack large pallets of food boxes outside Advancing the Kingdom on Spruce Street for a drive-by distribution to those in need Saturday morning in Shamokin.

Jack Leiby, of Shamokin, receives the first box of food Saturday morning in front of the Advancing the Kingdom shop on Spruce Street from volunteers Mary King, left, and Paige Bassett. Leiby, who did not arrive in a vehicle, braved the sub-freezing temperatures to receive a food box on his motorized wheelchair.

A long line of vehicles on Spruce Street awaits the distribution of food boxes from Advancing the Kingdom, a Shamokin-based automotive service company, and Blessings of Hope Ministries. Volunteers handed out a total of 432 boxes of food Saturday morning to those in need.

LEFT: Volunteers hit the streets, handing out boxes of food to people in need. By 10 a.m. a long line of vehicles had already formed around the block from Sixth Street to Spruce Street outside the Advancing the Kingdom garage in Shamokin where the distribution was taking place. RIGHT: Volunteers unpack large pallets of food boxes outside Advancing the Kingdom on Spruce Street for a drive-by distribution to those in need Saturday morning in Shamokin.

SHAMOKIN — To a caring group of volunteers, it didn’t matter that the air temperature early Saturday morning hovered at or below 20 degrees. They were determined to give of their time and love in handing out food boxes to a large group of needy people.

Nearly an hour before a local food distribution event — organized by Advancing the Kingdom (ATK), a local vehicle repair business, and coordinated with Blessings of Hope Ministries — was set to begin, a long line of vehicles already stretched far around the block from West Spruce Street back onto Sixth Street. Inside each vehicle sat individuals and families, either in need of food themselves or delivering items to others in need.

Christian business outreachFor ATK owners Alex and Paige Bassett, providing a Christian outreach through their business targeted at meeting a need in their local community is something they simply couldn’t overlook. ATK, which opened its doors to the community back on Oct. 3, has already had a profound impact upon countless lives.

“Earlier this winter, we recognized a need right here in our own community for food and knew it was something we could help provide,” Alex pointed out. “Food is a basic necessity we felt we could offer them. Our family is friends with the leaders of Blessings of Hope and we were looking to do an outreach in the community.”

“For our first event, we were able to receive federal funding through a U.S. Dept. of Agriculture (USDA) grant. However, the government recently pulled that grant prior to this event so we needed to raise the money on our own,” he added. “Several local area businesses including Breakers Cigars, M&T Bank and Riteway Sealing contributed greatly toward the cause and we ended up raising over $1,700.”

Bassett and his wife, who are originally from Sunbury and Selinsgrove, respectively, moved to Shamokin two years ago.

“When you follow after God, you don’t always know exactly where He’s going to take you all the time,” he said. “Even with the distribution, our original plan last month was to have them walk right up and get their boxes here but we couldn’t with all the snow on the ground. God had a different plan in mind for us.”

Paige agreed with her husband.

“During our last distribution, we saw a huge sense of community as a number of people were bringing out boxes for their family, friends, neighbors and others they don’t even know personally who are in need,” she said. “God calls us to take care of others in need and for us to help out even random strangers is such a blessing.”

Paige said that while you may not be able to get to know those in need personally, you can always show them God’s love.

“In our 5 1/2 years of marriage, my husband and I have had our moments of need like everyone else, but the Lord has always provided for us and we want to do the same for others.”

Volunteers eager to helpFriends of the Bassett’s, Gwen and Kendal Weaver, of Elysburg, along with their two young daughters Sharita and Tanya, volunteered to help with the event.

“We’re really excited about doing this. Last time we ran out of boxes so we’ll see what happens today,” said Gwen.

Sharita and Tanya each spoke of what it means for them to be a part of the food distribution.

“It’s all about giving and showing our love to other people, letting God’s light shine through us,” Sharita explained. “When we take the time to talk and have prayer with them, people are more open to share their stories with us.”

Her younger sister Tanya agreed adding, “Last time the truck came at 10 a.m. and this time it arrived at 9:30 a.m. Seeing all of these vehicles out here already, it’s great to be able to help so many people in need.”

Another volunteer, Simeon Stoltzfus, of Millersburg, who is a friend of the Weaver family, agreed to help out as soon as he heard about it.

“I just found out about it last night and said sure when they asked me if I’d like to do this,” he said.

Three Amish women from Gratz — Mary King, Madalyn King and Barbara Fisher — also were pleased to participate in the distribution as volunteers.

The donation amount collected by ATK, through individual contributions and those of area businesses, was presented to Blessings of Hope, a Christian feeding ministry based in the Lancaster area, which provided 432 food boxes. Each box contained a variety of fresh household food items, including basic staples such as water, milk, bread and eggs.

In order to facilitate a smooth and adequate distribution, recipients were asked to form a line with their vehicles moving west along Spruce Street outside the ATK shop. Teams of two warm-hearted volunteers then handed a food box to those in each vehicle, while offering to have a word of prayer with them.

Grateful recipientsPerhaps the irony was that the first food box recipient didn’t even arrive in an automobile. Shortly before 10 a.m. when the distribution was set to officially begin, Jack Leiby, of Shamokin, drove up on his motorized wheelchair with nothing other than a winter jacket to protect him. Nonetheless, Leiby gratefully received his box of food, braving the freezing cold temperatures without having the luxury of a vehicle to sit in.

Others were also thankful as they waited inside their vehicles.

Jim Jones, of Shamokin, explained that he just underwent open heart surgery at Geisinger and how the outreach is helping him.

“I’m unable to work right now so this is really a blessing and greatly appreciated,” Jones said. “When I had my surgery, I felt the hand of God up there with me in that operating room and now he’s provided this.

Mitchell Raker, a U.S. Marine Corps veteran from Trevorton, came to pick up food boxes for shut-ins in need.

“I think the event is really good because it’s helping people who have been hit hard by COVID-19,” Raker said. “I’m here with my van to pick up food for those in need who are shut-ins or unable to drive and get out on their own.”

Additional food distributions are being planned by ATK for this year. For more information, the public may follow them on their Facebook page facebook.com/atkshamokin or new website www.atkshamokin.com, which is currently under development. ATK’s phone number is 570-898-6752. All donations made by check or money order should be made payable to “Blessings of Hope.” 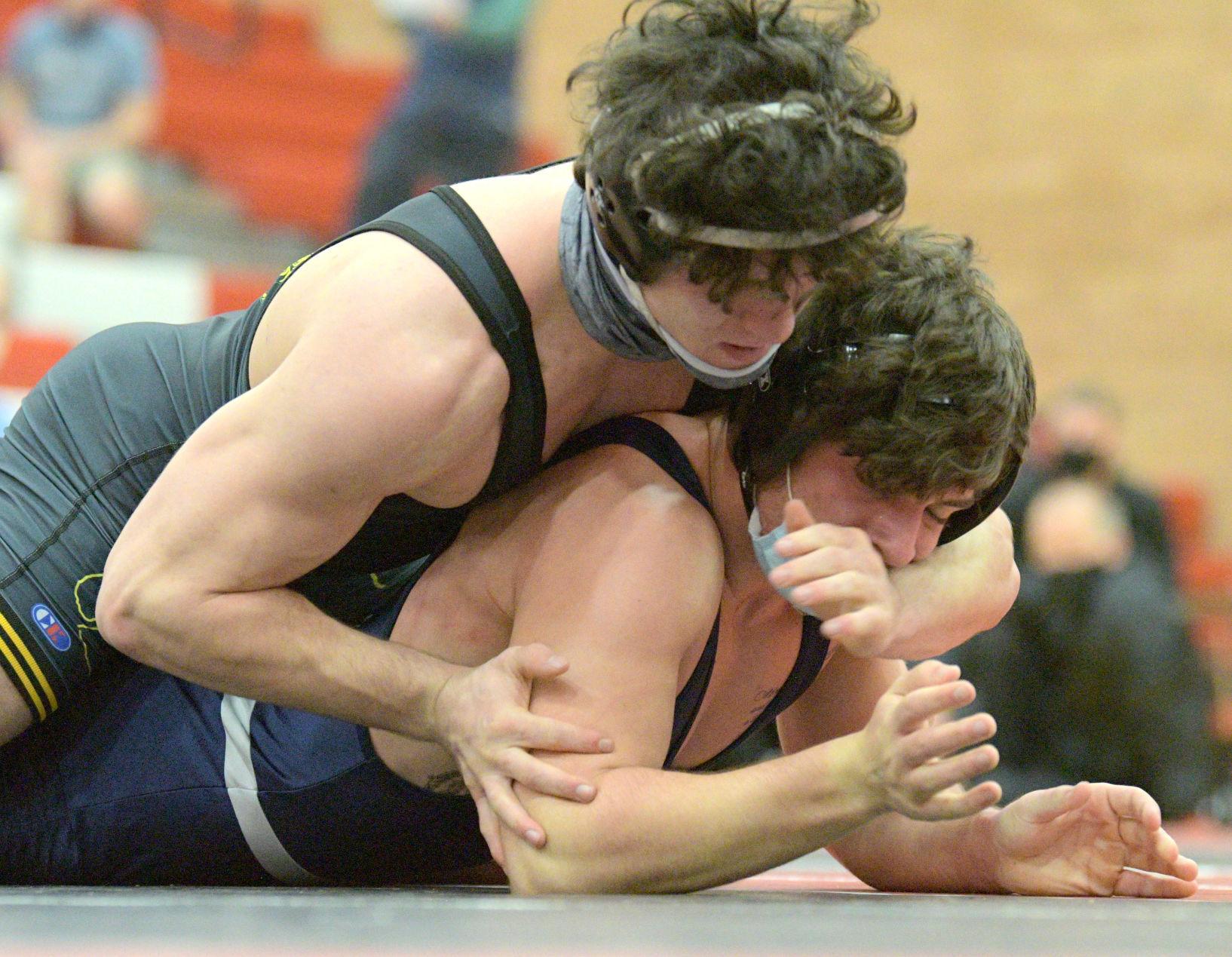 COAL TOWNSHIP — A convicted felon from Coal Township was taken into custody Friday afternoon on a warrant and charged with illegally owning a 12-gauge shotgun found at his residence Feb. 4.

Craig Smallwood, 30, of 1228 Pulaski Ave., was arraigned Saturday morning via video by on-call Magisterial District Judge John Gembic III for possessing a firearm while being a convicted felon. He was initially committed to Northumberland County Jail in lieu of $15,000 cash bail, but later posted bail and was released.

The charge was filed by Coal Township Detective Matthew Hashuga.

Smallwood was taken into custody by police from Coal Township, Shamokin and Kulpmont, and a state parole agent at about 3:30 p.m. near a set of railroad tracks in the Big Mountain area of Coal Township.

Hashuga previously stated in a news release that Smallwood was observed outside his residence holding a rifle or shotgun at about 8 a.m. Feb. 4. Officers later recovered a shotgun from a table on an outside patio.

According to court records, Smallwood was found guilty of a felony burglary charge out of Warren County, Virginia, on June 17, 2019.