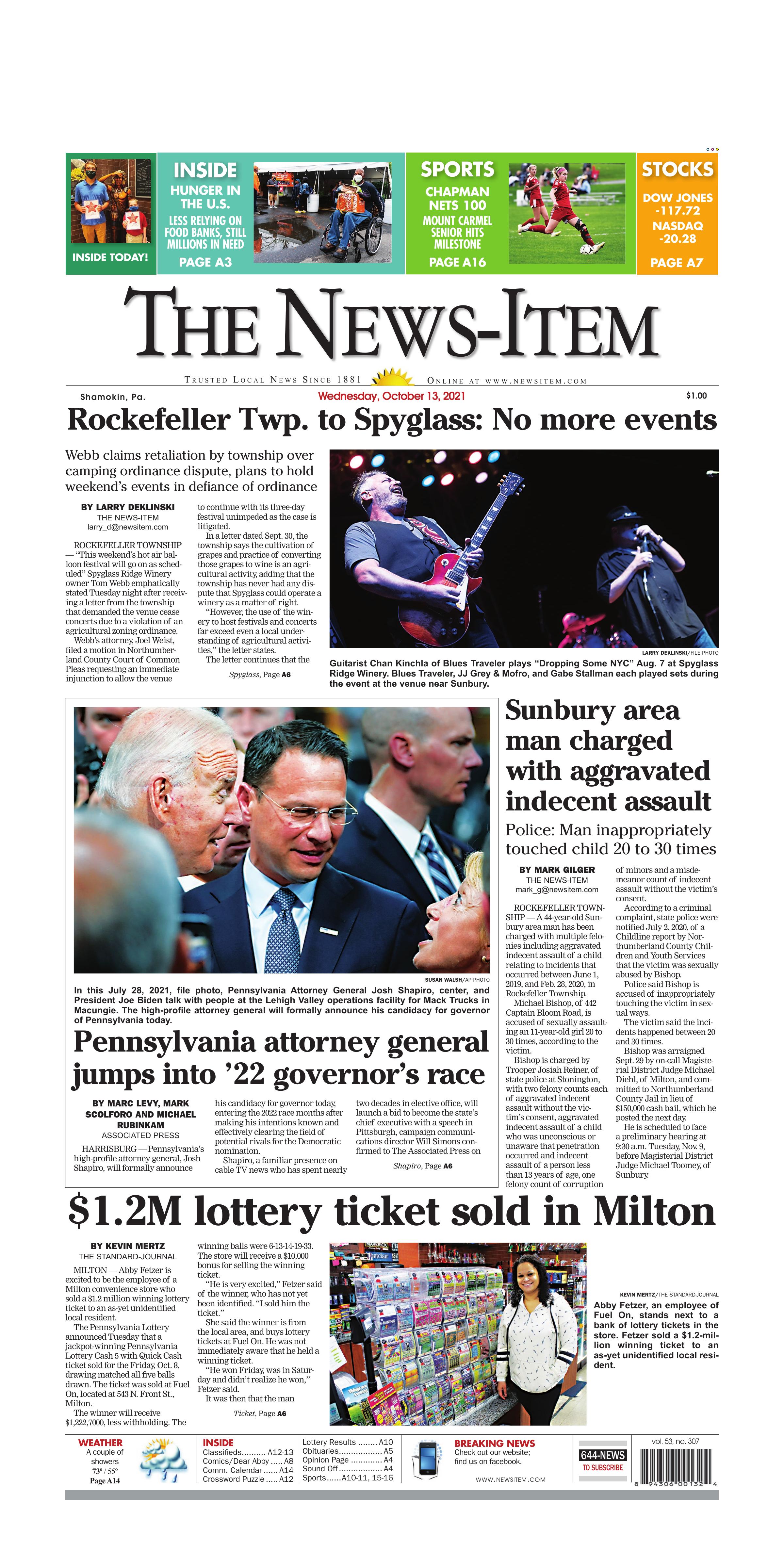 Abby Fetzer, an employee of Fuel On, stands next to a bank of lottery tickets in the store. Fetzer sold a $1.2-million winning ticket to an as-yet unidentified local resident.

Abby Fetzer, an employee of Fuel On, reaches for the copy of a $1.2-million winning lottery ticket which was sold at the store.

MILTON — Abby Fetzer is excited to be the employee of a Milton convenience store who sold a $1.2 million winning lottery ticket to an as-yet unidentified local resident.

“He is very excited,” Fetzer said of the winner, who has not yet been identified. “I sold him the ticket.”

She said the winner is from the local area, and buys lottery tickets at Fuel On. He was not immediately aware that he held a winning ticket.

“He won Friday, was in Saturday and didn’t realize he won,” Fetzer said.

It was then that the man checked his numbers and realized he held a winning ticket.

Fetzer is thrilled to have sold the winning ticket.

She said the winner is not yet sure what he will do with his winnings. A copy of the winning ticket is on display at the store.

Anyone holding a jackpot-winning Cash 5 with Quick Cash ticket should contact the nearest lottery office for further instructions or call 800-692-7481.

More than 34,400 other Cash 5 with Quick Cash tickets also won prizes in the drawing.

ROCKEFELLER TOWNSHIP — “This weekend’s hot air balloon festival will go on as scheduled” Spyglass Ridge Winery owner Tom Webb emphatically stated Tuesday night after receiving a letter from the township that demanded the venue cease concerts due to a violation of an agricultural zoning ordinance.

Webb’s attorney, Joel Weist, filed a motion in Northumberland County Court of Common Pleas requesting an immediate injunction to allow the venue to continue with its three-day festival unimpeded as the case is litigated.

In a letter dated Sept. 30, the township says the cultivation of grapes and practice of converting those grapes to wine is an agricultural activity, adding that the township has never had any dispute that Spyglass could operate a winery as a matter of right.

“However, the use of the winery to host festivals and concerts far exceed even a local understanding of agricultural activities,” the letter states.

“It is now clear that the focus of Spyglass Ridge Winery has moved from viticulture and reasonable commercial activities incident to the manufacturing of wine to being Central Pennsylvania’s premier outdoor concert venue,” the letter claims.

The letter reiterates that public entertainment facilities are not permitted in an agricultural zone and, therefore, Webb’s hosting of concerts is not a lawful use. The letter warns that the zoning hearing officer “will take enforcement action” in the event further concerts or other public entertainment — including the balloon festival — occurs.

Webb claimed Tuesday that the township is retaliating because he continues to challenge an ordinance regarding camping. He alleged the township adopted an ordinance about five years ago that specifically targeted his business and included excessive fees that act as a tax.

“About five years ago, when I was holding festivals and stuff, I allowed people to camp for free,” Webb explained, adding that his business should have been grandfathered in. “The wording of the ordinance is ‘event camping’ and I am the only one that does that. It’s illegal to pass an ordinance that targets just me.”

Webb, a township resident, said he stayed quiet concerning the ongoing camping dispute out of courtesy, but felt the recent letter was a personal attack.

“Why put salt in the wound and cause bad blood? I am friends with a couple of people on the board,” Webb stated. “I worked hard to bring great things to this area, but when you attack me it doesn’t sit well.”

Webb hinted at further legal action, maintaining that there will be hot air balloons and various live acts Friday through Sunday.

“They’re going to have to come on my property to stop me,” Webb remarked. “They’re not going to come here and remove 1,000 people.” 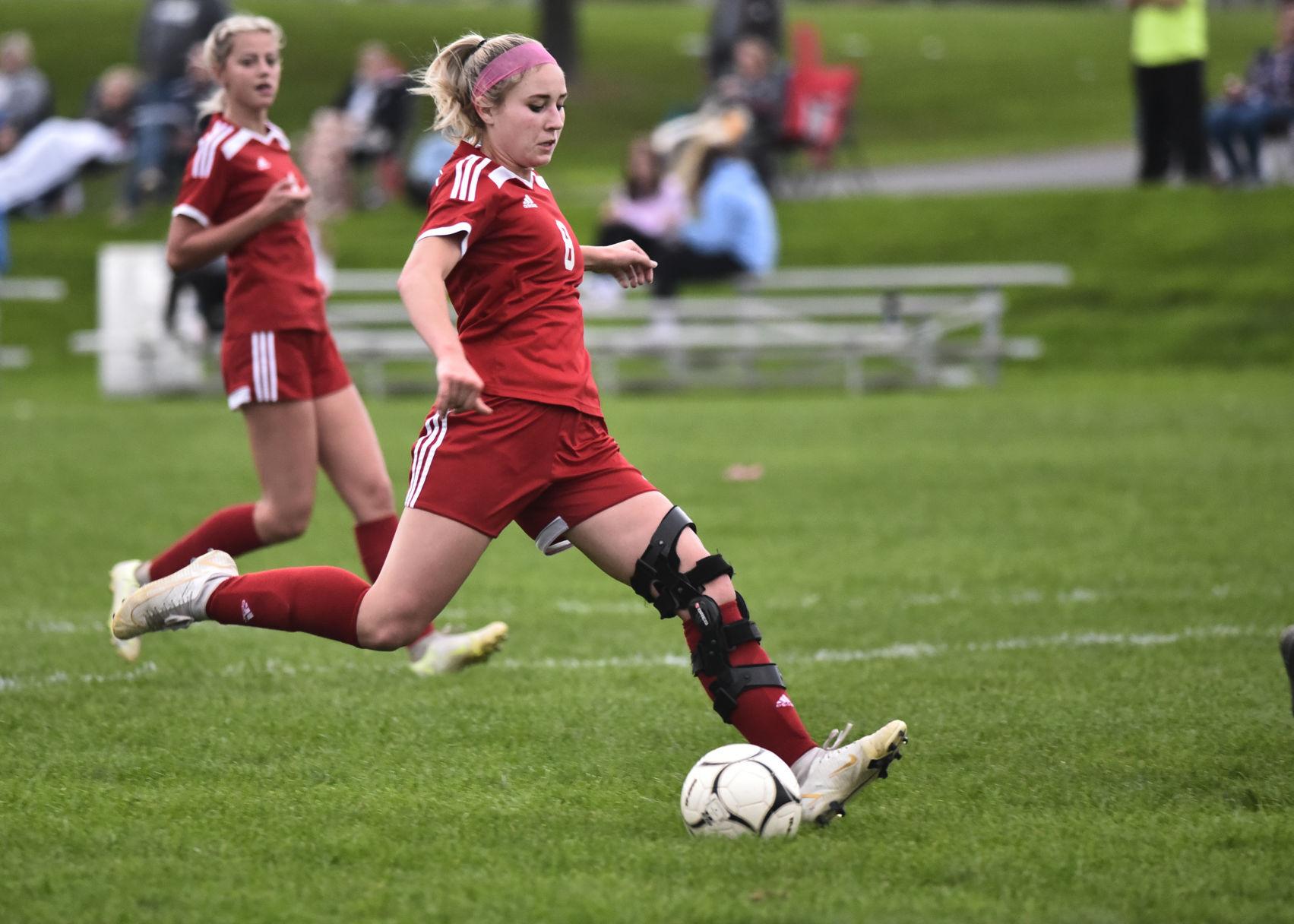 Mount Carmel Area High School soccer player Mia Chapman prepares for a shot in the second half of a home game Tuesday against Warrior Run. Chapman would score making it the 100th goal of her scholastic career.

ROCKEFELLER TOWNSHIP — A 44-year-old Sunbury area man has been charged with multiple felonies including aggravated indecent assault of a child relating to incidents that occurred between June 1, 2019, and Feb. 28, 2020, in Rockefeller Township.

Michael Bishop, of 442 Captain Bloom Road, is accused of sexually assaulting an 11-year-old girl 20 to 30 times, according to the victim.

According to a criminal complaint, state police were notified July 2, 2020, of a Childline report by Northumberland County Children and Youth Services that the victim was sexually abused by Bishop.

Police said Bishop is accused of inappropriately touching the victim in sexual ways.

The victim said the incidents happened between 20 and 30 times.

Bishop was arraigned Sept. 29 by on-call Magisterial District Judge Michael Diehl, of Milton, and committed to Northumberland County Jail in lieu of $150,000 cash bail, which he posted the next day.

He is scheduled to face a preliminary hearing at 9:30 a.m. Tuesday, Nov. 9, before Magisterial District Judge Michael Toomey, of Sunbury. 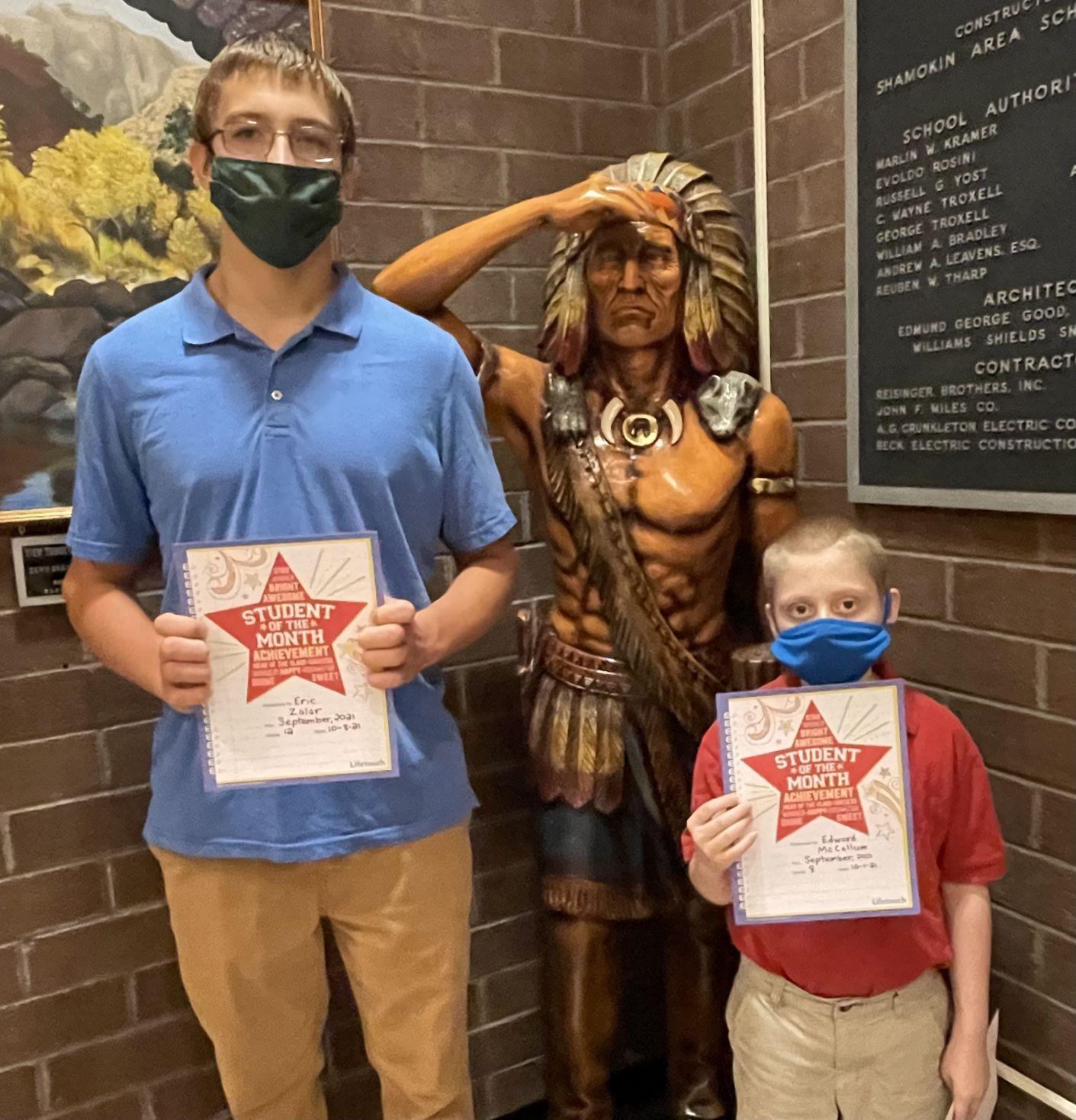 Eleventh grade student Eric Zalar, left, and eighth grade student Edward McCollum, right, have been selected as students of the month for September at Shamokin Area Middle-High School. Eric is the son of Frank and Linda Zalar. He is a distinguished honor roll student and was a member of the National Junior Honor Society in seventh and eighth grade. Eric participates in band, football, track and field, fishing club, and the varsity club. In his spare time Eric enjoys fishing, lifting, outdoors, and playing video games. Edward is the son of David and Marie McCollum. Eddie is a recent Indian Pride winner. In his spare time Eddie enjoys watching TV, playing on his computer, and playing with his pet rabbit.