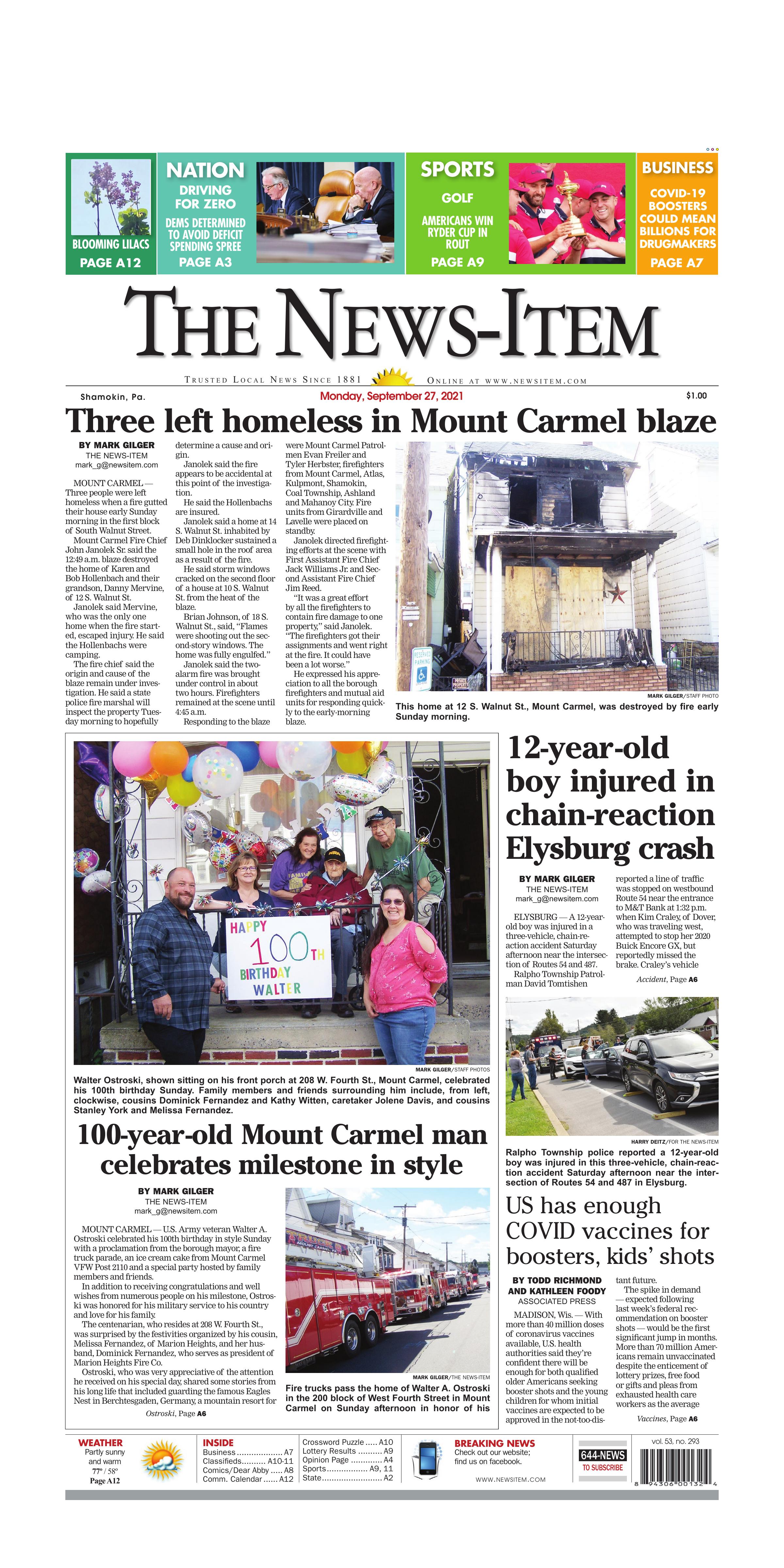 Janolek said Mervine, who was the only one home when the fire started, escaped injury. He said the Hollenbachs were camping.

The fire chief said the origin and cause of the blaze remain under investigation. He said a state police fire marshal will inspect the property Tuesday morning to hopefully determine a cause and origin.

Janolek said the fire appears to be accidental at this point of the investigation.

He said the Hollenbachs are insured.

Janolek said a home at 14 S. Walnut St. inhabited by Deb Dinklocker sustained a small hole in the roof area as a result of the fire.

He said storm windows cracked on the second floor of a house at 10 S. Walnut St. from the heat of the blaze.

Brian Johnson, of 18 S. Walnut St., said, “Flames were shooting out the second-story windows. The home was fully engulfed.”

Janolek said the two-alarm fire was brought under control in about two hours. Firefighters remained at the scene until 4:45 a.m.

“It was a great effort by all the firefighters to contain fire damage to one property,” said Janolek. “The firefighters got their assignments and went right at the fire. It could have been a lot worse.”

He expressed his appreciation to all the borough firefighters and mutual aid units for responding quickly to the early-morning blaze.

Mount Carmel Mayor Philip “Bing” Cimino, left, reads a proclamation to Walter A. Ostroski on Sunday afternoon in commemoration of his 100th birthday.

Fire trucks pass the home of Walter A. Ostroski in the 200 block of West Fourth Street in Mount Carmel on Sunday afternoon in honor of his 100th birthday.

MOUNT CARMEL — U.S. Army veteran Walter A. Ostroski celebrated his 100th birthday in style Sunday with a proclamation from the borough mayor, a fire truck parade, an ice cream cake from Mount Carmel VFW Post 2110 and a special party hosted by family members and friends.

In addition to receiving congratulations and well wishes from numerous people on his milestone, Ostroski was honored for his military service to his country and love for his family.

Ostroski, who was very appreciative of the attention he received on his special day, shared some stories from his long life that included guarding the famous Eagles Nest in Berchtesgaden, Germany, a mountain resort for Adolf Hitler’s Nazi regime.

He enlisted in the Army in 1948, and was trained in tank operations with the 7th Armored Constabulary, 2nd Battalion 14th Armored Calvary.

In addition to serving in Berchtesgaden, Ostroski also served his country during the Korean War.

He was honorably discharged in 1952 with the rank of sergeant.

His younger brother, Joseph Ostroski, enlisted in the Army in 1943 during World War II and participated in the Battle of Normandy before returning home with three Purple Hearts.

Ostroski credited his long life to eating well and never smoking after being discharged from the Army.

The avid hunter and fisherman, who is a son of the late Joseph and Cecelia (Yurkiewicz) Ostroski, is a charter member of Mount Carmel VFW Post 2110 and a 50-year plus member of the United Brotherhood of Carpenters and Joiners of America, National Rifle Association and American Legion in Mount Carmel.

He also is a lifetime member of the Keystone Fish and Game Association in Irish Valley and is a parishioner of Transfiguration Ukrainian Catholic Church in Shamokin.

Mount Carmel VFW Post 2110 Commander Michael Adams and Past Post Commanders Ron Halcovich and Joe Fisher congratulated Ostroski on his 100th birthday, thanked him for serving his country and presented him with a commemorative ice cream cake.

A parade of fire trucks from Mount Carmel, Atlas, Marion Heights, Kulpmont, Locust Gap, Strong and Natalie circled Ostroski’s home before firefighters parked their trucks in his block and congratulated the birthday celebrant.

Mount Carmel Mayor Philip “Bing” Cimino presented Ostroski with a proclamation that describes him as a “caring and humble man who always put others before himself.”

The plaque also commends Ostroski for his military service and his love of life and family and wishes him well in the future.

Family members pointed out that Ostroski, whose caretaker is Jolene Davis, still loves to cook blueberry pancakes for breakfast and has a remarkable memory for his age.

At the age of 2 1/2, Ostroski lost his father to a mine explosion in Wilburton on March 4, 1924. Walter, his brother and mother then moved to the family farm of his grandmother, Magdalene Yurkiewicz, on Bear Gap Road in Cleveland Township, Columbia County, and remained there through adulthood.

Walter attended Fisherdale Schoolhouse with his brother and learned how to fish and hunt under the guidance of his uncles. He became an excellent marksman and avid sportsman while helping to run the farm and orchards to provide for family members who included his brother, mother, grandmother, aunt Martha Yurkiewicz and uncle John Yurkiewicz, who were sister and brother.

After his discharge from the Army, Walter returned to the family farm and continued to work in engine mechanics, sheet metal, gunsmithing and carpentry. He continued to provide for his family until 1993 when he and his aunt, who were the last surviving family members, sold the farm and moved to Mount Carmel, where he cared for her until her death in 2006.

Team USA holds the trophy after the Ryder Cup matches at the Whistling Straits Golf Course Sunday in Sheboygan, Wisconsin.

Ralpho Township police reported a 12-year-old boy was injured in this three-vehicle, chain-reaction accident Saturday afternoon near the intersection of Routes 54 and 487 in Elysburg.

ELYSBURG — A 12-year-old boy was injured in a three-vehicle, chain-reaction accident Saturday afternoon near the intersection of Routes 54 and 487.

Ralpho Township Patrolman David Tomtishen reported a line of traffic was stopped on westbound Route 54 near the entrance to M&T Bank at 1:32 p.m. when Kim Craley, of Dover, who was traveling west, attempted to stop her 2020 Buick Encore GX, but reportedly missed the brake. Craley’s vehicle crashed into the rear bumper of a gray 2019 Honda Accord operated by Mark Siegle, of Schwenksville, who was stopped in the line of traffic. Siegle’s car was then pushed forward into the rear of a black 2017 Mitsubishi Outlander SEL operated by Krista Kern, of Reading, who also was stopped in the line of traffic.

Tomtishen said a 12-year-old male passenger in Kern’s vehicle was injured and transported by Elysburg Ambulance to Geisinger Medical Center in Danville to be evaluated. Others involved in the crash complained of neck pain, but said they would get evaluated on their own if necessary.

Traffic was shut down on westbound Route 54 as a result of the accident and redirected through the parking lots of nearby businesses.

Assisting police at the scene were firefighters from Elysburg and Overlook, fire police and Elysburg Ambulance personnel.

An investigation is continuing into the accident, Tomtishen said.

Kathy Gonsar and Joe Rocuskie were pleasantly surprised to find lilacs on Sept. 11 blooming in their yard at the corner of Orange and Dewart streets in Shamokin. Normally, the lilacs only bloom in the spring.