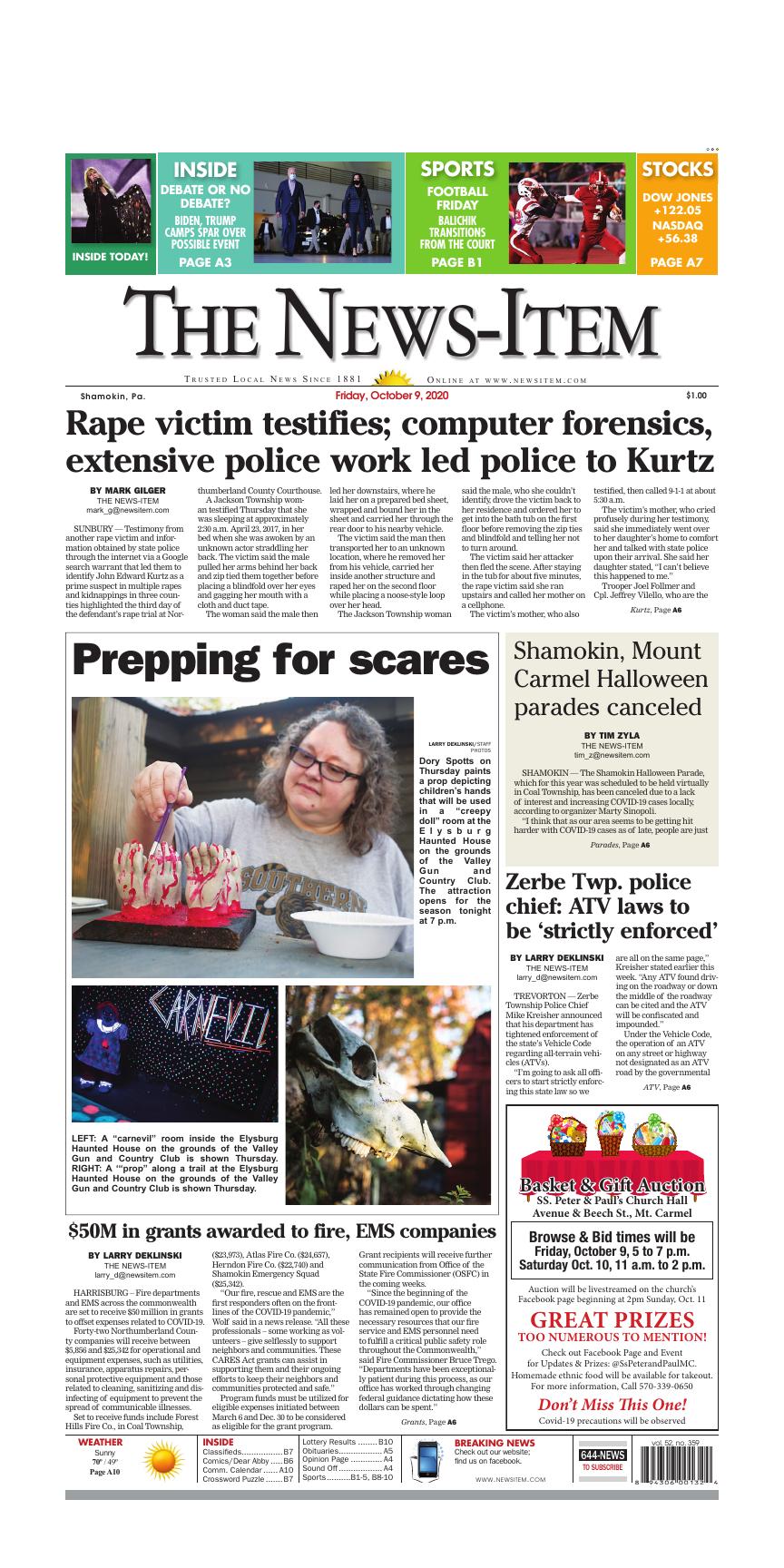 SUNBURY — Testimony from another rape victim and information obtained by state police through the internet via a Google search warrant that led them to identify John Edward Kurtz as a prime suspect in multiple rapes and kidnappings in three counties highlighted the third day of the defendant’s rape trial at Northumberland County Courthouse.

A Jackson Township woman testified Thursday that she was sleeping at approximately 2:30 a.m. April 23, 2017, in her bed when she was awoken by an unknown actor straddling her back. The victim said the male pulled her arms behind her back and zip tied them together before placing a blindfold over her eyes and gagging her mouth with a cloth and duct tape.

The woman said the male then led her downstairs, where he laid her on a prepared bed sheet, wrapped and bound her in the sheet and carried her through the rear door to his nearby vehicle.

The victim said the man then transported her to an unknown location, where he removed her from his vehicle, carried her inside another structure and raped her on the second floor while placing a noose-style loop over her head.

The Jackson Township woman said the male, who she couldn’t identify, drove the victim back to her residence and ordered her to get into the bath tub on the first floor before removing the zip ties and blindfold and telling her not to turn around.

The victim said her attacker then fled the scene. After staying in the tub for about five minutes, the rape victim said she ran upstairs and called her mother on a cellphone.

The victim’s mother, who cried profusely during her testimony, said she immediately went over to her daughter’s home to comfort her and talked with state police upon their arrival. She said her daughter stated, “I can’t believe this happened to me.”

Trooper Joel Follmer and Cpl. Jeffrey Vilello, who are the arresting officers in the case, testified how state police were able to obtain evidence through the internet via a Google search warrant that ultimately led to charges being filed against Kurtz.

On Sept. 14, 2016, Follmer said a search warrant was obtained from Senior Judge Harold Woelfel ordering Google Inc. to provide state police with all historical information related to Google search queries and Google image search queries of a Turbot Township rape victim and her residence for July 13 to July 20, 2016 (the Turbot Township woman was raped July 20, 2016). The search warrant was electronically submitted to Google Inc. through its law enforcement request system.

On Nov. 29, 2017, Google Inc. provided information to state police that included the date and time of the Google search, the IP (Internet Protocol) address associated with the search, the search querie and the GAIA ID, which is a unique identification number assigned by Google to the search.

On Dec. 9, 2017, Follmer reviewed the information that showed an unknown individual utilized the IP address on July 19, 2016, approximately four hours prior to the Turbot Township woman being kidnapped and raped.

Through additional computer research and information obtained by the rape victims, Vilello said state police were able to identify Kurtz as a prime suspect.

Due to the way the rapes and kidnappings were carried out, Vilello said state police believed they may have been committed by someone with a military or law enforcement background.

After learning Kurtz began his employment with the Department of Corrections at SCI-Frackville in 2010 before transferring to SCI-Coal Township in 2015, state police obtained his work schedule from the Department of Corrections at those two state institutions. He said state police learned that Kurtz wasn’t working on the dates and times he’s accused of raping and kidnapping or attempting to rape and kidnap four of the victims.

After zeroing in on Kurtz as a prime suspect, Vilello said police began tracking his cellphone and truck and conducted 24-hour surveillance on the defendant, including helicopter surveillance.

Trooper Max Andres testified about aerial photographs taken of the Jackson Township victim’s residence. Andres said he talked with the victim at Evangelical Community Hospital in Lewisburg following the rape.

Hannah McDowell, a registered nurse at Evangelical Community Hospital, said she performed a sexual assault examination on the Jackson Township woman on the day she was raped. She said injuries suffered by the victim were consistent with rape.

Caroline Reilly, a state police serology scientist, said she analyzed the sexual assault examination at Harrisburg Regional Laboratory and found spermatozoa in the kit, specifically on the vaginal swabs. She said the prepared samples were forwarded to the Greensburg DNA Laboratory for further testing.

In addition to the prosecution witnesses, Northumberland County First Assistant District Attorney Julia Skinner once again presented numerous exhibits including photographs during the trial, which began Tuesday and is scheduled to last another week.

As he has done throughout the jury trial, Kurtz’s attorney Michael Suders, a county public defender, objected to multiple documents entered as evidence and testimony he referred to as hearsay. Suders, whose objections have been mostly overruled by Northumberland County President Judge Charles H. Saylor, claimed Thursday a computer file involving the Google search warrant was missing.

Kurtz, 46, of Shamokin, is charged with raping and kidnapping or attempting to rape and kidnap five women between 2012 and 2017.

In addition to the Turbot Township and Jackson Township victims in Northumberland County, police said Kurtz attempted to rape and kidnap a Shamokin Township woman on Nov. 9, 2012; a Mayberry Township (Montour County) woman between Oct. 1, 2013, and Dec. 17, 2017; and a Franklin Township (Columbia County) woman on June 3, 2015. 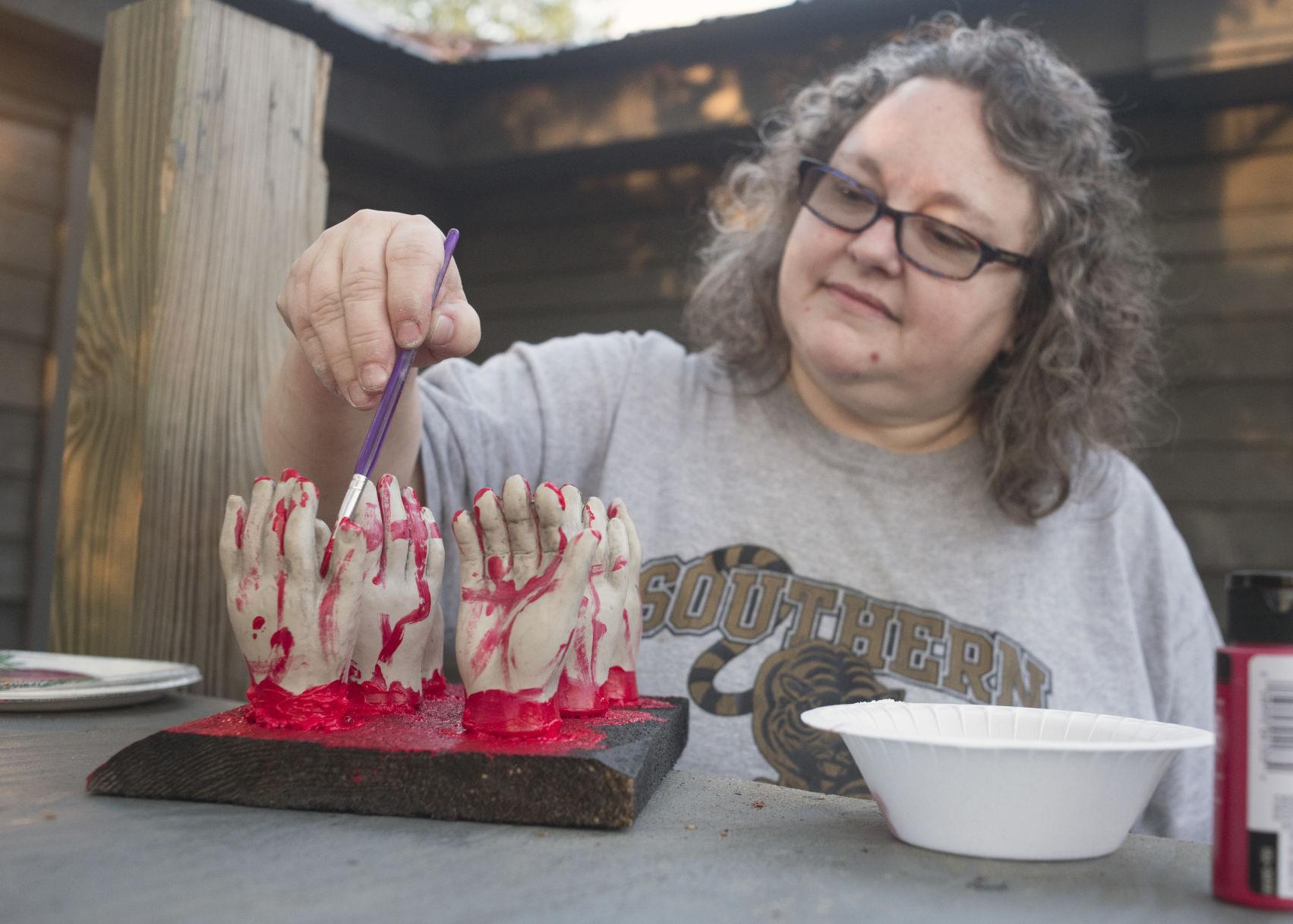 Dory Spotts on Thursday paints a prop depicting children’s hands that will be used in a “creepy doll” room at the Elysburg Haunted House on the grounds of the Valley Gun and Country Club. The attraction opens for the season tonight at 7 p.m. 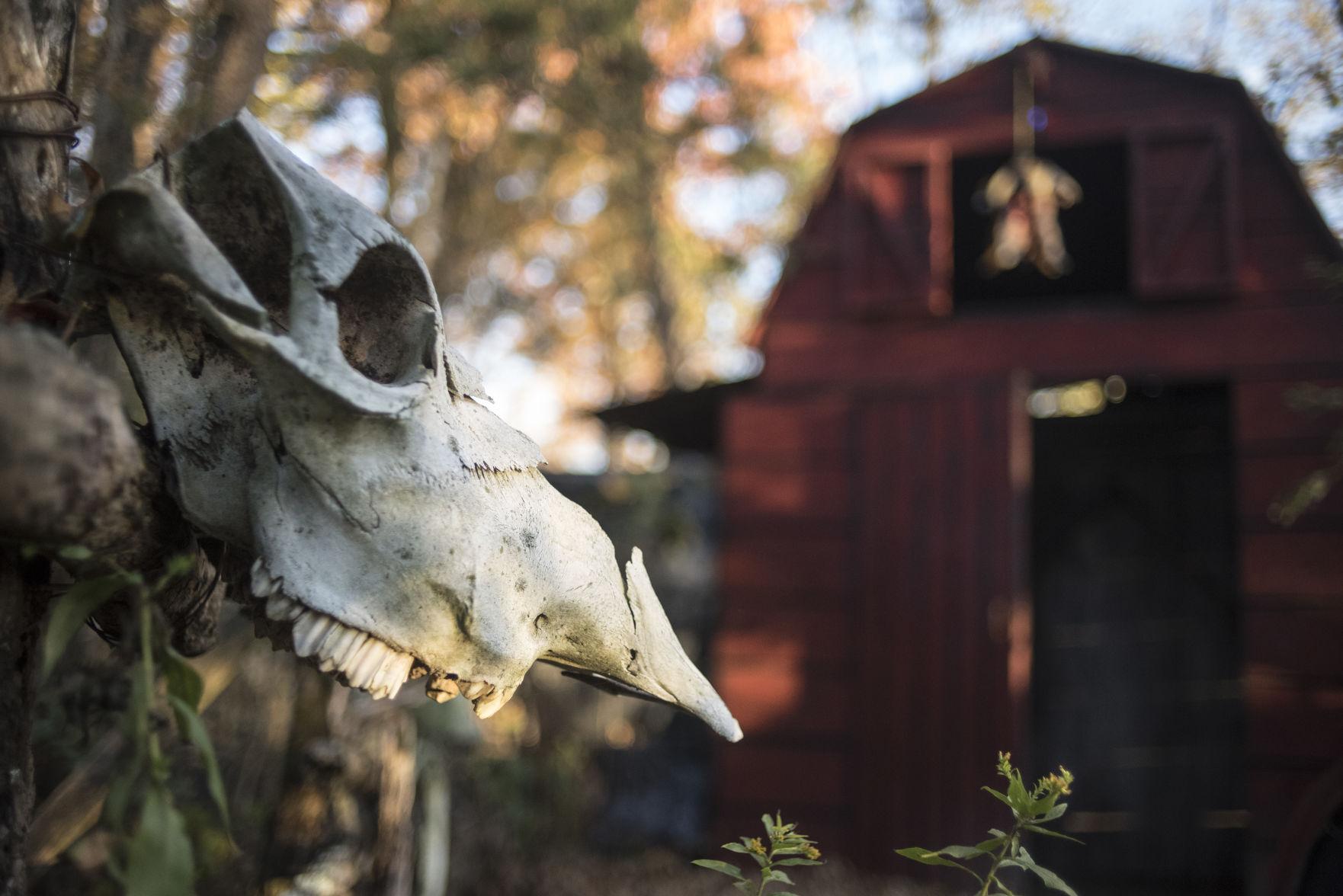 A ‘“prop” along a trail at the Elysburg Haunted House on the grounds of the Valley Gun and Country Club is shown Thursday. The attraction opens for the season tonight at 7 p.m.

HARRISBURG – Fire departments and EMS across the commonwealth are set to receive $50 million in grants to offset expenses related to COVID-19.

Forty-two Northumberland County companies will receive between $5,856 and $25,342 for operational and equipment expenses, such as utilities, insurance, apparatus repairs, personal protective equipment and those related to cleaning, sanitizing and disinfecting of equipment to prevent the spread of communicable illnesses.

“Our fire, rescue and EMS are the first responders often on the front-lines of the COVID-19 pandemic,” Wolf said in a news release. “All these professionals – some working as volunteers – give selflessly to support neighbors and communities. These CARES Act grants can assist in supporting them and their ongoing efforts to keep their neighbors and communities protected and safe.”

Program funds must be utilized for eligible expenses initiated between March 6 and Dec. 30 to be considered as eligible for the grant program. Grant recipients will receive further communication from Office of the State Fire Commissioner (OSFC) in the coming weeks.

“Since the beginning of the COVID-19 pandemic, our office has remained open to provide the necessary resources that our fire service and EMS personnel need to fulfill a critical public safety role throughout the Commonwealth,” said Fire Commissioner Bruce Trego. “Departments have been exceptionally patient during this process, as our office has worked through changing federal guidance dictating how these dollars can be spent.”

Trego said the purpose of this funding is to provide some much needed financial assistance to first responders who have found it difficult to keep their operations running due to COVID-19. Of the $50 million in funding set aside for this new program, $44 million will be made available to fire and rescue companies and the remaining $6 million will go to EMS companies. 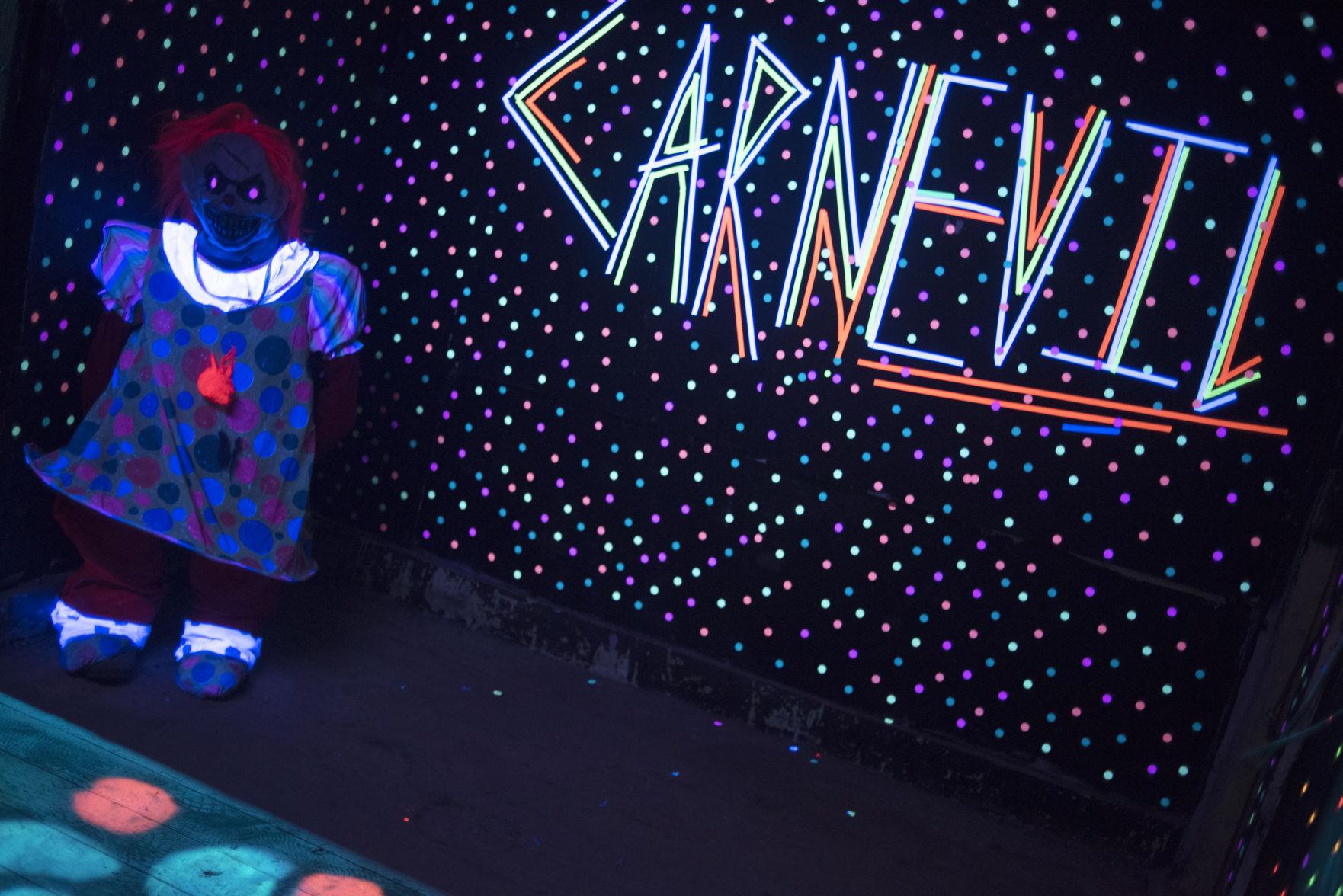 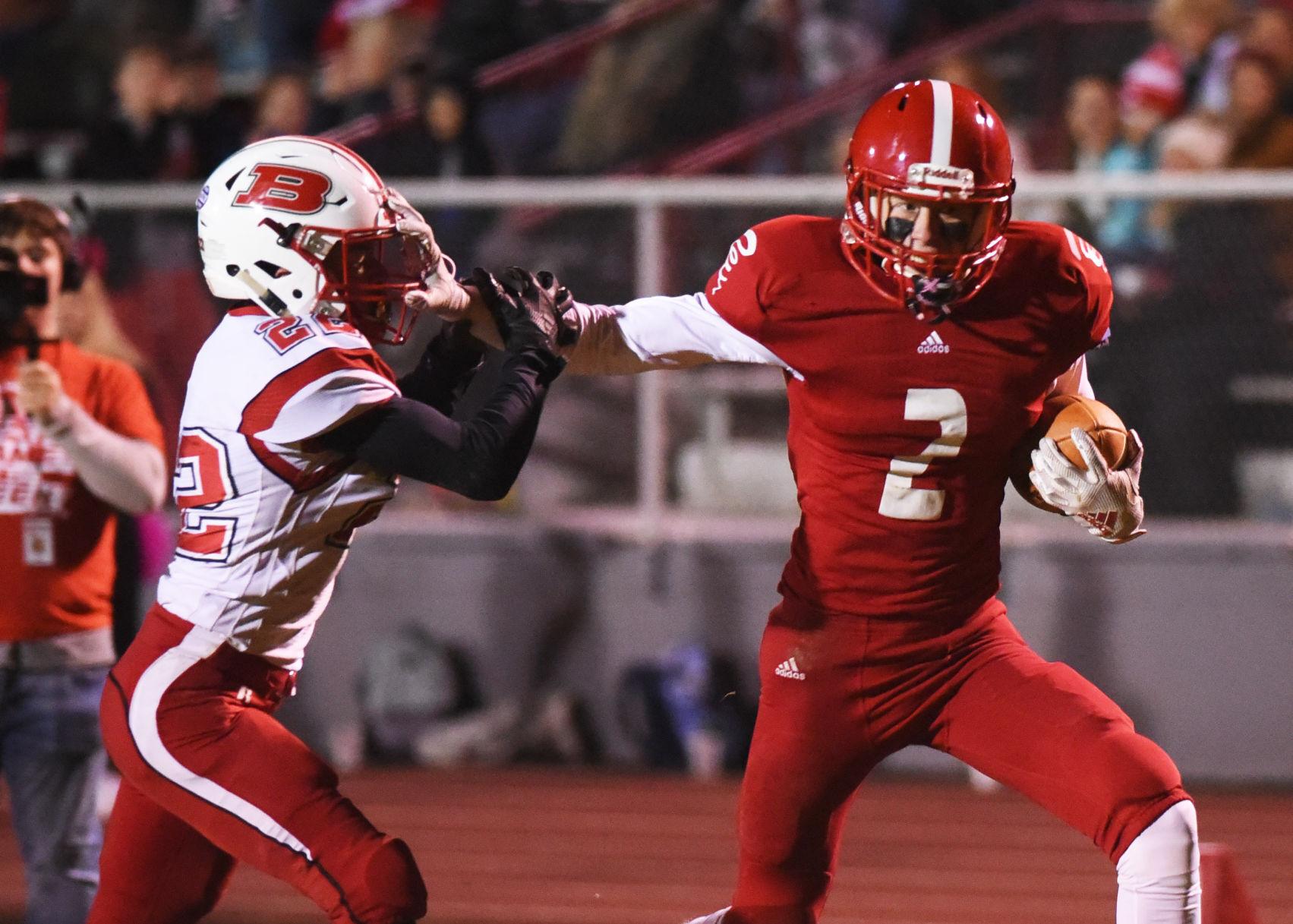 Mount Carmel’s Michael Balichik (2) stiff-arms a Bloomsburg defender after hauling in a pass in the first half against the Panthers last season at the Silver Bowl in Mount Carmel.

SHAMOKIN — The Shamokin Halloween Parade, which for this year was scheduled to be held virtually in Coal Township, has been canceled due to a lack of interest and increasing COVID-19 cases locally, according to organizer Marty Sinopoli.

“I think that as our area seems to be getting hit harder with COVID-19 cases as of late, people are just very hesitant,” Sinopoli said in an email to organizers announcing the cancellation.

She continued, “I would like to say thank you to Jim (Catino) and the (Northumberland County Career and Technology Center) for being so gracious and willing to let us move the parade to your property.”

Sinopoli also thanked The News-Item for its willingness to promote the event and Bernie Rumberger, owner of AREA Services for his co-sponsorship each year.

A press release issued Tuesday also announced the Mount Carmel Halloween Parade, which was set to be run by the Mount Carmel Eagles Aerie 464 and UNB Bank has also been canceled due to COVID-19 safety concerns.

“I’m going to ask all officers to start strictly enforcing this state law so we are all on the same page,” Kreisher stated earlier this week. “Any ATV found driving on the roadway or down the middle of the roadway can be cited and the ATV will be confiscated and impounded.”

Under the Vehicle Code, the operation of an ATV on any street or highway not designated as an ATV road by the governmental agency having jurisdiction is illegal. Roads and streets designated for ATVs are posted with a green sign containing the side view silhouette of an ATV and rider in white.

An ATV may be operated on highways and streets when necessary to cross a bridge or culvert and during periods of emergency when so declared by a policy agency having jurisdiction.

According to the Department of Conservation and Natural Resources (DCNR), Governor Tom Wolf’s Disaster Declaration for the COVID-19 health emergency does not allow for the operation of ATVs on the roadways of Pennsylvania.

An ATV may make a direct crossing of a street or highway if the crossing is made at an angle of approximately 90 degrees and at a place where no obstruction prevents a quick and safe crossing.

“In the past, on occasion we have been creative with riders giving them some space to ride along the roadways as long as they were riding slowly and keeping it calm,” Kreisher said. “From recent complaints over this past summer, it came to my attention that we have a growing issue and this more friendly approach is not working anymore.”

Kreisher described the area as “ATV country” and acknowledged that many local residents own ATVs and love riding, but he said the residents who don’t own ATVs and disagree with their use on roads must be respected.

“It is clearly the law in Pennsylvania that it is unlawful to operate a snowmobile or an ATV on any street or highway which is not designated and posted as a snowmobile or an ATV road by the governmental agency having jurisdiction,” Kreisher said. “Any ATV found riding alongside the roadway can be cited and will be escorted off the side of the roadway and or confiscated the same.”

When reached Thursday for comment on Kreisher’s new policy, Supervisor Mike Mazer said he would rather comment as a board, which holds its next meeting Monday night.

ATV operators living in Pennsylvania must have a certification of registration and a registration plate affixed to the vehicle, unless driven on their property, DCNR said. The owner of an ATV must have liability insurance coverage if the vehicle requires registration. 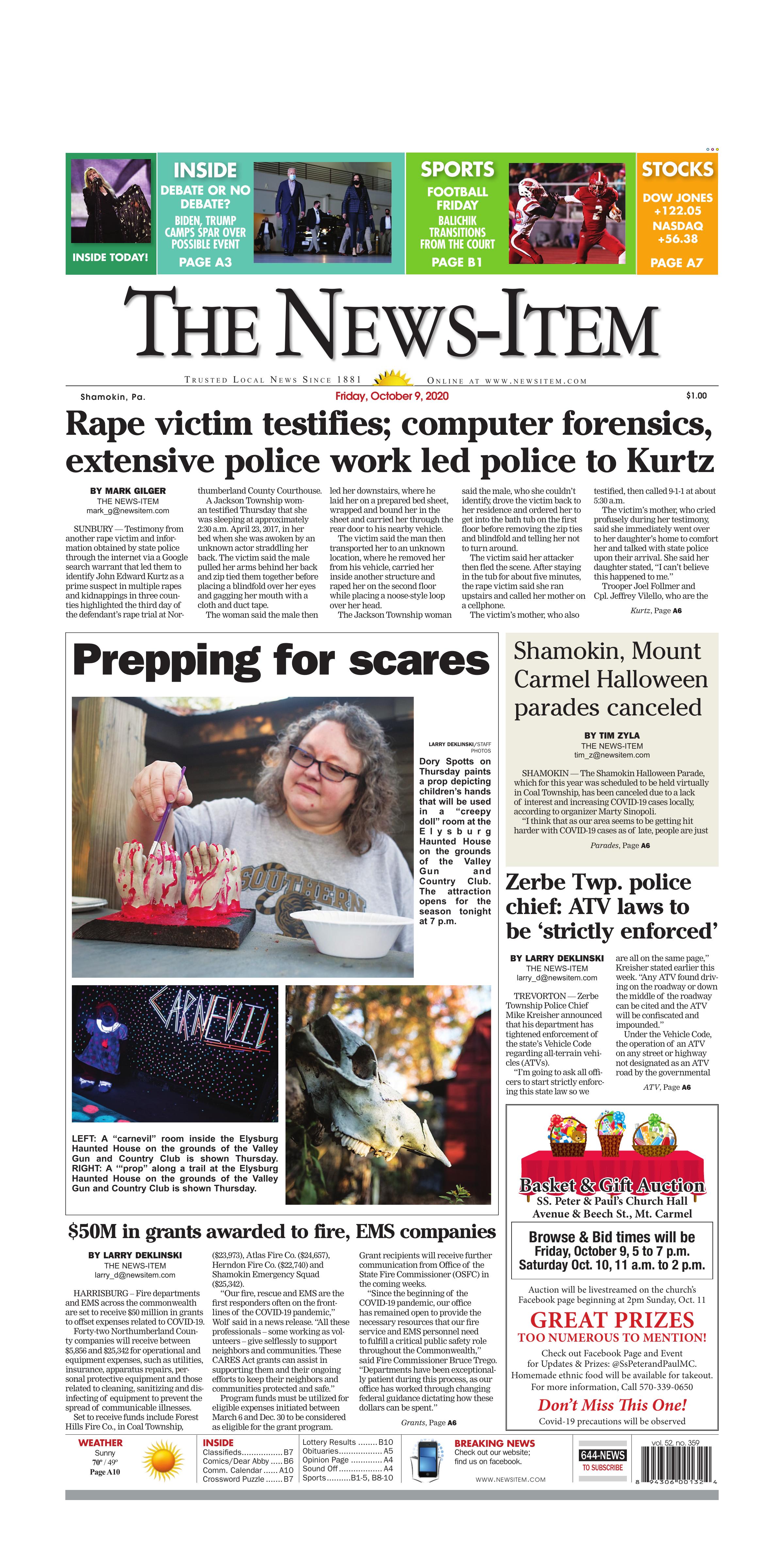