SHAMOKIN — A search warrant obtained by city police revealed the father of an infant boy who died Wednesday morning after being found unconscious in his home at 509 S. Seventh St. had his arm completely covering the infant’s face when the mother found them in a bedroom at about 8:30 a.m.

According to a search warrant issued by Magisterial District Judge John Gembic III to Patrolman James Filko on Wednesday night, the mother of the boy, Patrica Zimmerman, said her son, Jax Garancheski, was not in a cradle when she found her boyfriend, Brandon Garancheski, sleeping with the child.

She told police her boyfriend, who is the father of the child, was lying in an upright position with his arm on top of the boy’s face. After yelling at the father to get up, the mother said the child was completely blue and unconscious. She said either the father or another person inside the home called 911.

The mother said she was instructed by a dispatcher at Northumberland County Communications Center to begin CPR on the infant before EMS from AREA Services arrived and transported her son to the hospital.

The mother said Patrolman William Zalinski then transported her to the hospital.

On Wednesday, Shamokin Police Chief Raymond Siko II said he and Zalinski responded to an emergency medical call at 10:13 a.m. at 509 S. Seventh St. Upon arriving at the residence, Siko said they found the boy unconscious and in cardiac arrest before being transported to the hospital.

James F. Kelley, Northumberland County Coroner, said Thursday that Jax was 8-weeks-old when he passed away Wednesday at 11:03 a.m. in the emergency room at Geisinger-Shamokin Area Community Hospital.

An autopsy, he said, was performed Thursday morning by Dr. Samuel Land at Forensic Pathology Associates in Allentown. His office, he continued, will await further test results from the autopsy before certifying the cause and manner of death.

Shown Thursday is the former J.H. and C.K. Eagle Silk Mill at 1340-1400 Chestnut St., Kulpmont, which has been sold to a limited liability company based in New York. Dan Luzon, of PAD Kulpmont LLC, sold the multi-story brick building for $250,000 to 1916 Prospect Avenue LLC, located at 32 Cottage St. in Middletown, New York.

Shown Thursday through a broken window is the former J.H. and C.K. Eagle Silk Mill at 1340-1400 Chestnut St., Kulpmont, which has been sold to a limited liability company based in New York.

KULPMONT — The former J.H. and C.K. Eagle Silk Mill at 1340-1400 Chestnut St. has been sold to a limited liability company (LLC) based in New York, according to borough solicitor Edward Greco and the Northumberland County Register and Recorders Office.

Dan Luzon, of PAD Kulpmont LLC, sold the multi-story brick building that stretches a block for $250,000 to 1916 Prospect Avenue LLC, located at 32 Cottage St. in Middletown, New York, according to the deed recorded on Oct. 12.

An LLC is an unincorporated business organization of one or more persons who have limited liability for the contractual obligations and other liabilities of the business.

The industrial building was built decades ago, but has long fallen from grace. The Environmental Protection Agency (EPA) in 2019 removed approximately 16,500 pounds of metal and other hazardous materials, including pesticides and mercury. Both the brick and metal smoke stacks were also dismantled. Loose bricks and mortar fell from a water tower at the former mill this August, prompting borough officials to cordon off the sidewalk and install a billboard in front of the huge edifice to prevent additional debris from landing on Route 61 and across the street.

Kulpmont Councilman Stephen Bielskie, who chairs the code, health and safety committee, met with 1916 Prospect Avenue LLC representative Eli Artman on Thursday to discuss the purchase and safety hazards. The councilman said the meeting was productive.

“Their plans right now are to make the building secure. There is evidence that people were in there. They also want to get someone in here to fix the bricks coming off the tower,” said Bielskie, adding that that new owner will remove a large piece of what appears to be roofing material dangling above an alley.

Bielskie said Artman indicated that the owner intends to use the western-most section of the industrial building as a warehouse and that a tenant might be lined up.

“He said the biggest challenge will be on the east side, the main building, because of its size and the amount of work that needs to be done,” Bielskie said.

The councilman added that Artman asked for contact information for Rep. Kurt Masser and Sen. John Gordner to see if any funding is available to bring the building back to life.

“I asked him to get some plans together so we know what we’re talking about,” Bielskie said. “He sounded positive and was very formal.”

According to the deed, the entities entered into the indenture on Sept. 30. The deal was prepared by Land Track Title Agency LLC, based in Chestnut Ridge, New York, and signed by a notary public.

Janel Barwick, director of the Northumberland County Tax Claim Bureau, said previously that three parcels encompassing the former silk mill were removed from the list of properties available at a county judicial sale held Oct. 1 at Northumberland County Career and Arts Center in Shamokin because someone paid $50,021.85 in taxes owed on the property from 2018, 2019 and 2020. Barwick said Luzon, of Bronx, New York, had owned the property since Aug. 15, 2011.

She said two of the parcels are located on Chestnut Street, while the third one is on Maple Street. Proceeds from the sale of the former mill will go to the county, Kulpmont Borough ($1,250) and Mount Carmel Area School District ($1,250). Total fees paid was $5,087.25, including a state transfer tax of $2,500.

Mayor Nick Bozza hopes 1916 Prospect Avenue LLC takes the opportunity to remove any hazards that may exist and transform the structure into a useful building.

“I do feel for the safety of our residents. I hope it gets cleaned up before the winter,” Bozza said of the recent damage to the water tower. “It’s nothing but an eye sore.”

Pieces of two vehicles, including a wheel and a tire, are scattered along Midvalley Road, about a mile east of Wilburton No. 1, in Conyngham Township, following a violent two-vehicle crash with entrapment 4:30 p.m. Thursday. One driver was flown to a hospital.

What remains of a Subaru Impreza is shown following a violent two-vehicle crash with entrapment at 4:30 p.m. Thursday on Midvalley Road, about a mile east of Wilburton No. 1, in Conyngham Township. One driver was flown to a hospital.

First responders treat the driver of a Mercedes-Benz GLK 350 following a violent two-vehicle crash on Midvalley Road, about a mile east of Wilburton No. 1, in Conyngham Township, at 4:30 p.m. Thursday. One driver was flown to a hospital.

CONYNGHAM TOWNSHIP — Tires, struts, fiberglass and various other pieces of two vehicles were strewn about Midvalley Road a mile east of Wilburton No. 1 following a near head-on crash at 4:30 p.m. Thursday.

One person was flown by helicopter and another transported by ground for treatment after being extricated from their vehicles by firefighters from Mount Carmel, Wilburton and Aristes.

First responders worked to free the female drivers of a Subaru Impreza and a Mercedes-Benz GLK 350 that appeared to collide in the eastbound lane. The vehicles came to a stop about 50 yards on either side of the point of impact.

Pennsylvania State Police at Bloomsburg also responded and are leading the investigation. A public information release was not available as of 9 p.m. Thursday.

The Subaru, which had extreme damage to the driver’s side, came to a stop in the westbound lane and was pointing west. The victim was trapped by the dashboard and was freed by firefighters from Wilburton and Aristes after about 15 minutes. She was transported by EMS from AREA Services to Wilburton No. 1, where a Life Flight helicopter was waiting.

The Mercedes-Benz came to a rest about 50 yards east of the Subaru on the shoulder of the eastbound lane and was also pointing west. Firefighters from Mount Carmel Area Rescue Squad removed the victim, who was treated by EMS from Geisinger Medical Center. The vehicle had damage to the driver’s side.

The road remained closed for an extended period of time as troopers examined the scene. 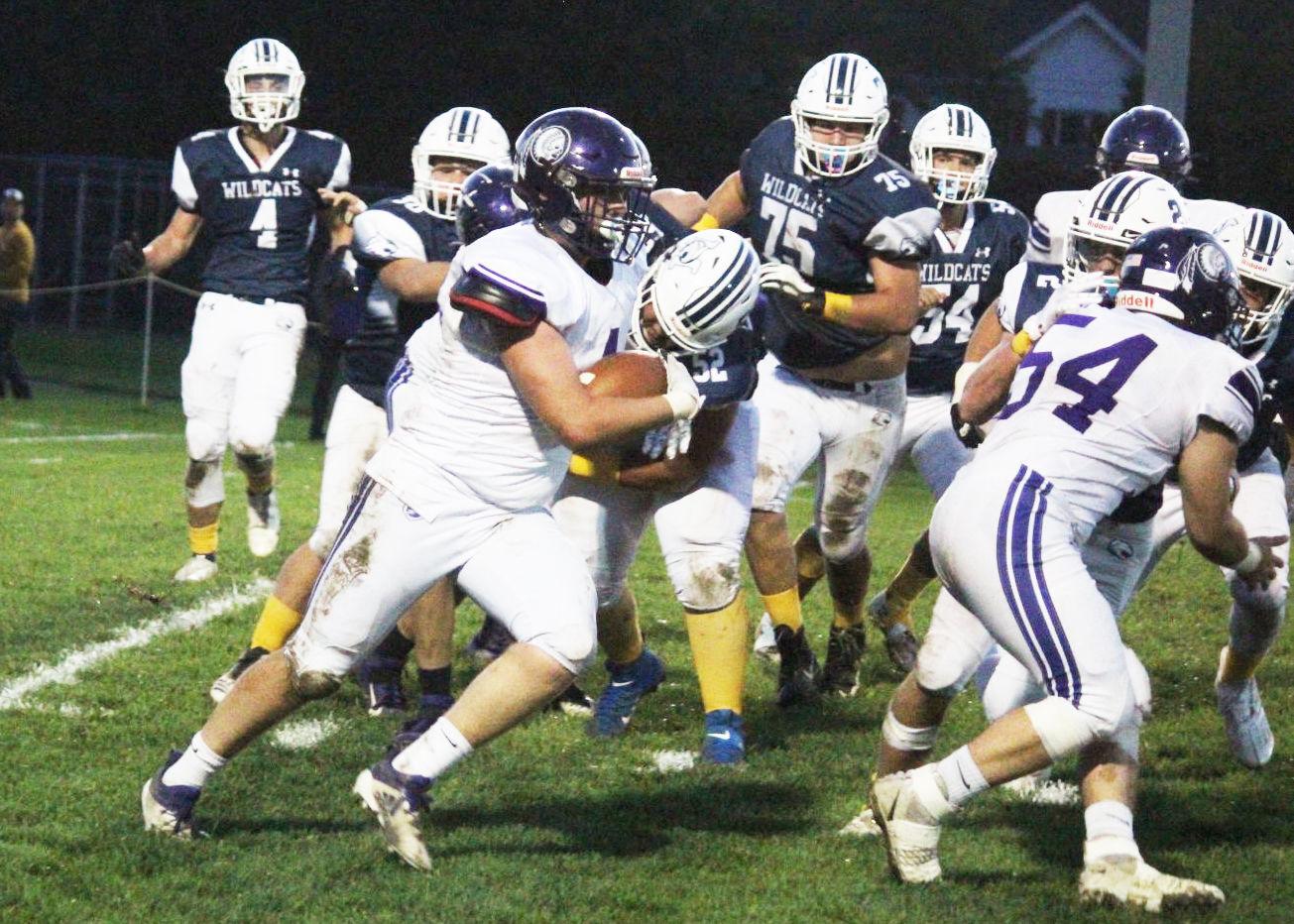 Shamokin’s Aaron Frasch gets a close-out block by Riley Macaluso to gain positive yardage in the first half of Friday’s game at Mifflinburg.

Local
Woman charged with attempting to run over boyfriend, damaging his minivan

SNYDERTOWN — A 27-year-old Montoursville woman has been charged with attempting to run over her boyfriend with a vehicle at his Snydertown home Wednesday, damaging his minivan and destroying several pieces of his property.

Joanne Lucille Egan, of 230 Broad St., was arraigned by video at 9:45 a.m. Thursday by Magisterial District Judge John Gembic III on a felony of aggravated assault by vehicle and misdemeanors of recklessly endangering another person, simple assault, uauthorized use of a vehicle and criminal mischief, and a summary of abandoning a vehicle on a highway.

Egan was released on $5,000 unsecured bail and ordered not to have contact with the victim.

According to a criminal complaint filed by Trooper Daniel Woody, of state police at Stonington, Jonathan Kane Carnes, of 3424 Snydertown Road, called state police at about 5 p.m. Wednesday to report a domestic altercation in progress between himself and Egan.

When police arrived, they found a discarded laundry basket in Carnes’ driveway, an overturned motorcycle, a large heat lamp and other objects scattered on the ground.

Carnes told police that he and Egan were initially involved in a verbal argument that escalated into her destroying several pieces of his property. Carnes said Egan then entered her red Ford Explorer and accelerated into his parked gray minivan, causing rear-end damage.

Carnes said Egan initially fled into his residence after abandoning his minivan and hid in a nearby shed. Egan was later found hiding in the basement of Carnes’ residence.

A neighbor told police he witnessed Egan screaming and assaulting Carnes in his driveway before attempting to run him over with a vehicle. The neighbor said Egan returned to Carnes’ house, broke his cellphone and knocked over a heat lamp and Carnes’ motorcycle before causing additional property damage.

The neighbor said Egan then entered Carnes’ minivan and abandoned it along Snydertown Road. He said Carnes took Egan’s keys away from her after she abandoned his vehicle. 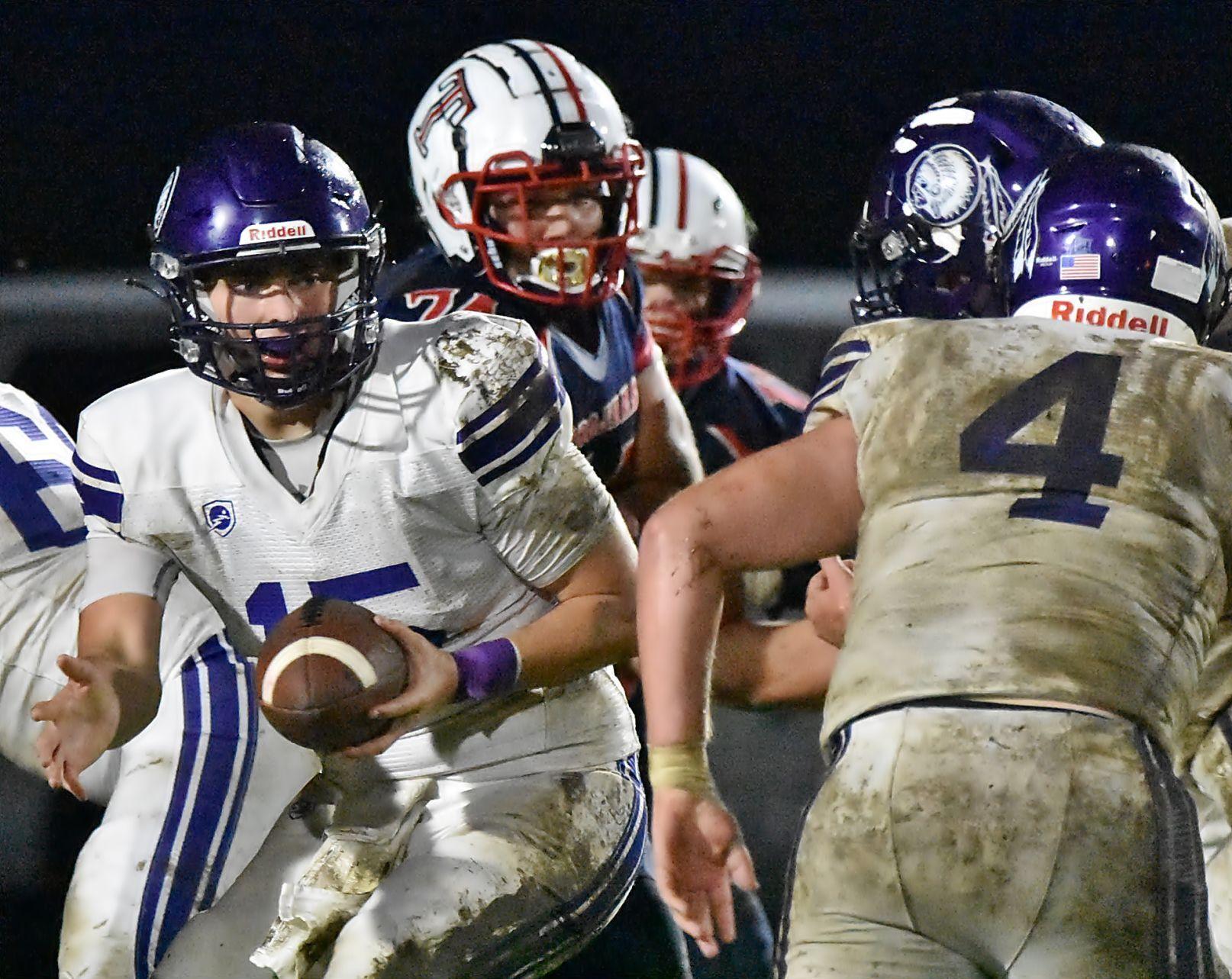 Quarterback Brett Nye (15) looks to hand the ball off to Aaron Frasch (4) for the Indians against Nanticoke.