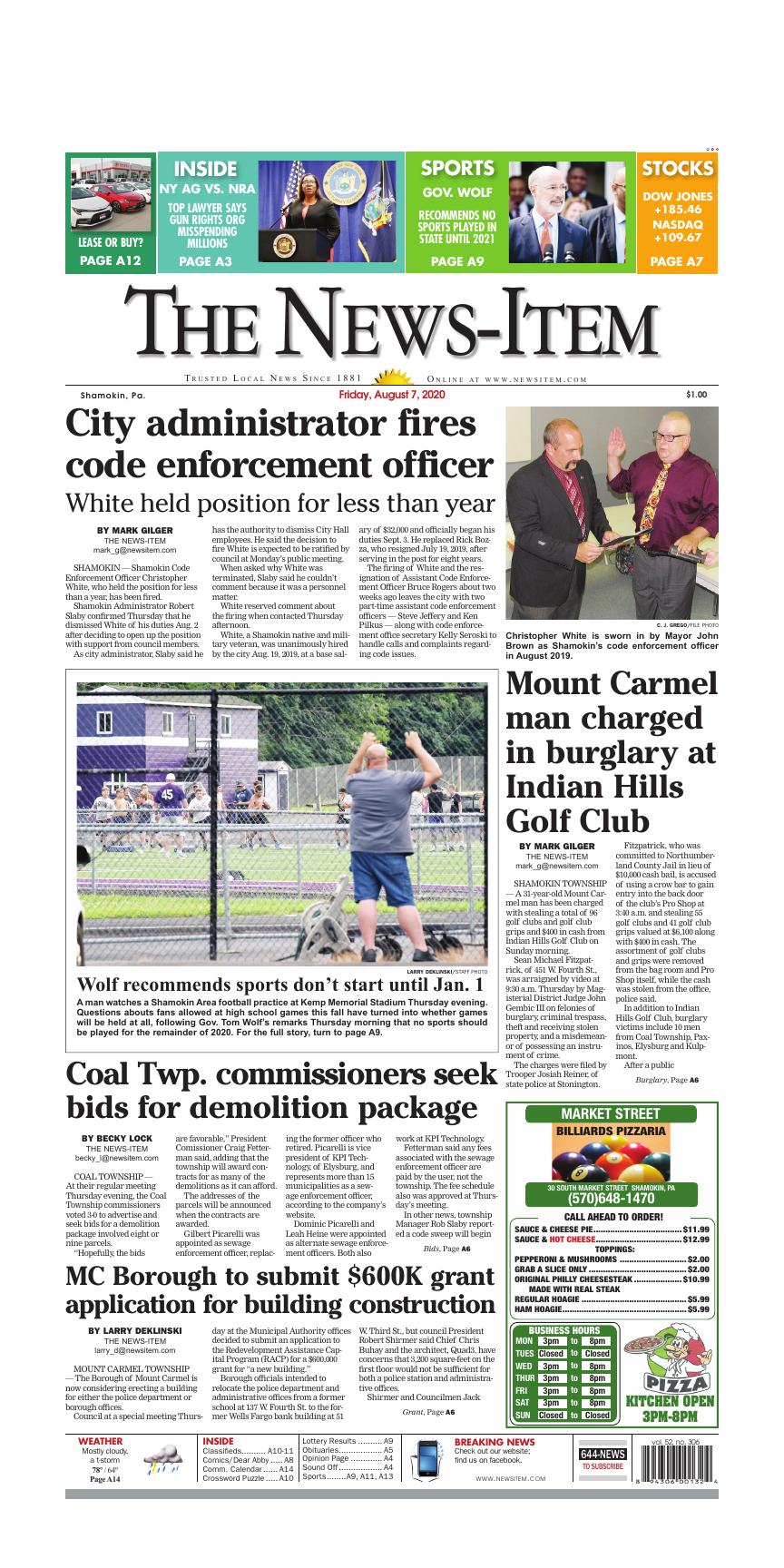 Christopher White is sworn in by Mayor John Brown as Shamokin’s code enforcement officer in August 2019.

SHAMOKIN — Shamokin Code Enforcement Officer Christopher White, who held the position for less than a year, has been fired.

Shamokin Administrator Robert Slaby confirmed Thursday that he dismissed White of his duties Aug. 2 after deciding to open up the position with support from council members.

As city administrator, Slaby said he has the authority to dismiss City Hall employees. He said the decision to fire White is expected to be ratified by council at Monday’s public meeting.

When asked why White was terminated, Slaby said he couldn’t comment because it was a personnel matter.

White reserved comment about the firing when contacted Thursday afternoon.

White, a Shamokin native and military veteran, was unanimously hired by the city Aug. 19, 2019, at a base salary of $32,000 and officially began his duties Sept. 3. He replaced Rick Bozza, who resigned July 19, 2019, after serving in the post for eight years. 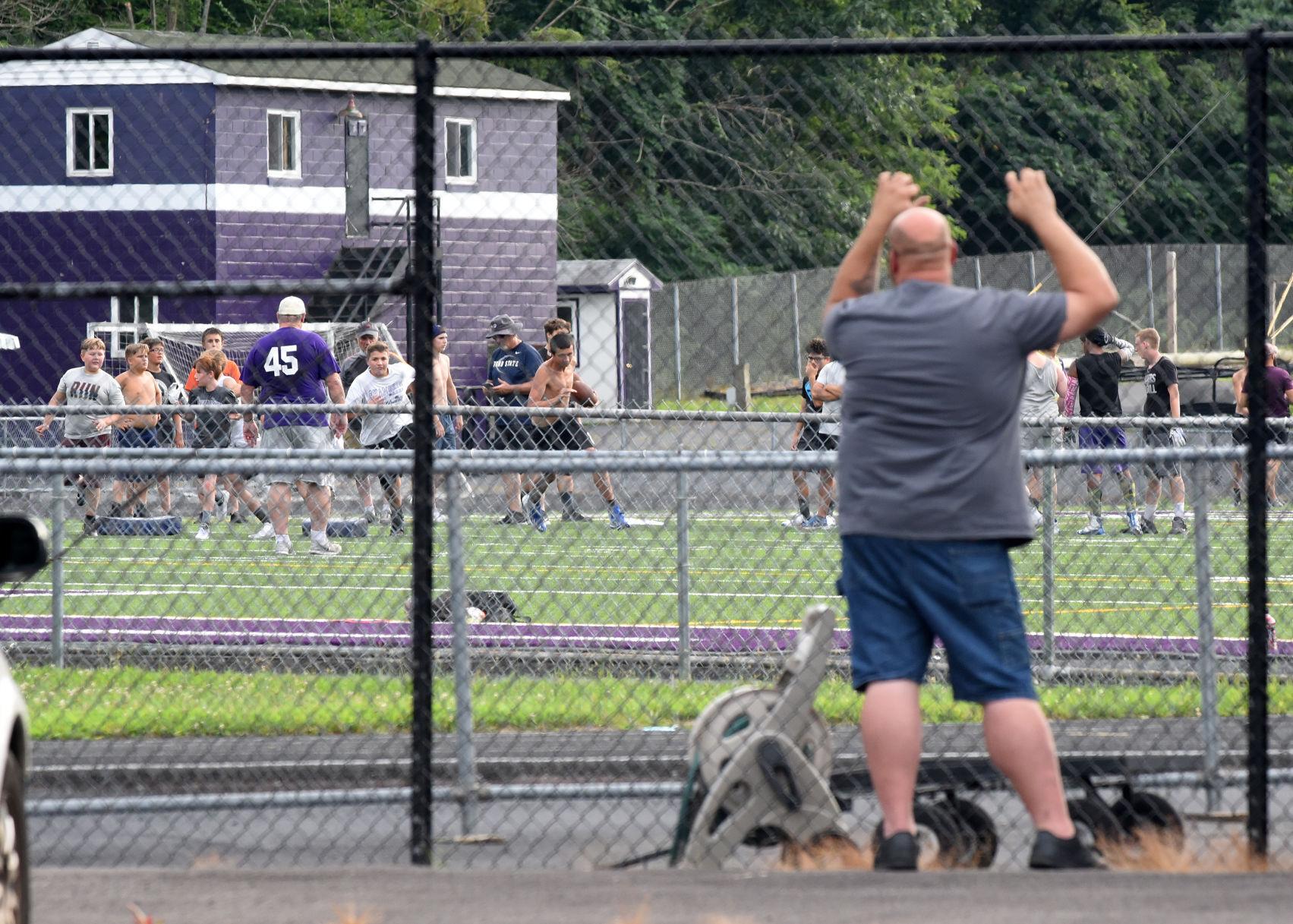 A man watches a Shamokin Area football practice at Kemp Memorial Stadium Thursday evening. Questions abouts fans allowed at high school games this fall have turned into whether games will be held at all, following Gov. Tom Wolf’s remarks Thursday morning that no sports should be played for the remainder of 2020. For the full story, turn to page A9.

“Hopefully, the bids are favorable,” President Comissioner Craig Fetterman said, adding that the township will award contracts for as many of the demolitions as it can afford.

The addresses of the parcels will be announced when the contracts are awarded.

Fetterman said any fees associated with the sewage enforcement officer are paid by the user, not the township. The fee schedule also was approved at Thursday’s meeting.

In other news, township Manager Rob Slaby reported a code sweep will begin on Monday, Aug. 17. Police officers and the code office will work together to locate violations.

“If your grass isn’t cut, you better cut it,” Fetterman warned, “and pick up your garbage.

Anyone who wants to submit a codes complaint may call the municipal office during business hours.

A fee of $1 per tire applies, and only tires that are less than 48 inches tall and no more than 14 inches wide will be accepted.

The event will be drive-thru only, with conservation district staff handling check-in, payment and tire unloading. Masks will be required of everyone on scene.

MOUNT CARMEL TOWNSHIP — The Borough of Mount Carmel is now considering erecting a building for either the police department or borough offices.

Council at a special meeting Thursday at the Municipal Authority offices decided to submit an application to the Redevelopment Assistance Capital Program (RACP) for a $600,000 grant for “a new building.”

Borough officials intended to relocate the police department and administrative offices from a former school at 137 W. Fourth St. to the former Wells Fargo bank building at 51 W. Third St., but council President Robert Shirmer said Chief Chris Buhay and the architect, Quad3, have concerns that 3,200 square-feet on the first floor would not be sufficient for both a police station and administrative offices.

Shirmer and Councilmen Jack Spade, Clement Plisiewicz Jr. and Kevin Powell did not come to a mutual decision on the building’s location or what it would contain. Edward Fegley, Robert Barrett and Leroy Moser Jr. were absent.

Derrick Backer, a revitalization consultant who was asked to attend the meeting, informed council members that the deadline for the application is Thursday and that a general description of the project would be required.

“The most we can loose is $500,” borough Manager John Bucanelli said of the application fee.

Backer said applicable projects need to cost at least $1 million and require a match of the grant award (a minimum of $500,000). He said the approval process would likely take several months, and that a “tedious” plan containing such things as project specifications and identification of the matching funds would be required, if approved.

The borough has already spent $335,000 to acquire the three-story bank building and parking lot across the street, architect designs and cleaning services.

Backer explained that the $500,000 grant from the state Department of Community and Economic Development that was originally earmarked to construct a borough building at 125 S. Oak St. and has since been designated for renovations inside the bank cannot be used as a match. The grant award could be matched various other ways, including federal and private funds, and loans.

“Where are we coming up with the money?” Shirmer asked of the matching funds during the hour-long discussion.

Spade recommended the borough use existing blue prints for the “split-level” municipal building that was proposed for 125 S. Oak St. and apply them to a one-story police station in the parking lot across from the bank.

“My personal opinion is that we keep moving forward with the bank and put in the application for the police department (building) and renovations inside the bank,” Spade added.

Plisiewicz responded by stating the plans could not be used because too many alterations would be made between the original blue prints and the new building.

Shirmer said the police department’s request for a sally port in the bank would take up much-needed space and cost too much money, and suggested utilizing an existing building that housed a drive-through ATM machine.

Council members and Bucanelli tossed the idea around of purchasing an undisclosed small parcel adjacent to borough land at the southend of Oak Street. Bucanelli said the borough has not yet approached the owner.

Shirmer felt the borough should spend between $300,000 and $400,000 inside the bank to allow administrative offices to move in and keep the police department in its current location until a new police station is built.

“If we wait, we’re investing the money into the bank,” Shirmer responded when it was recommended by Backer that the borough could submit an application next year. “We just need to get out of that building (137 W. Fourth St.).” 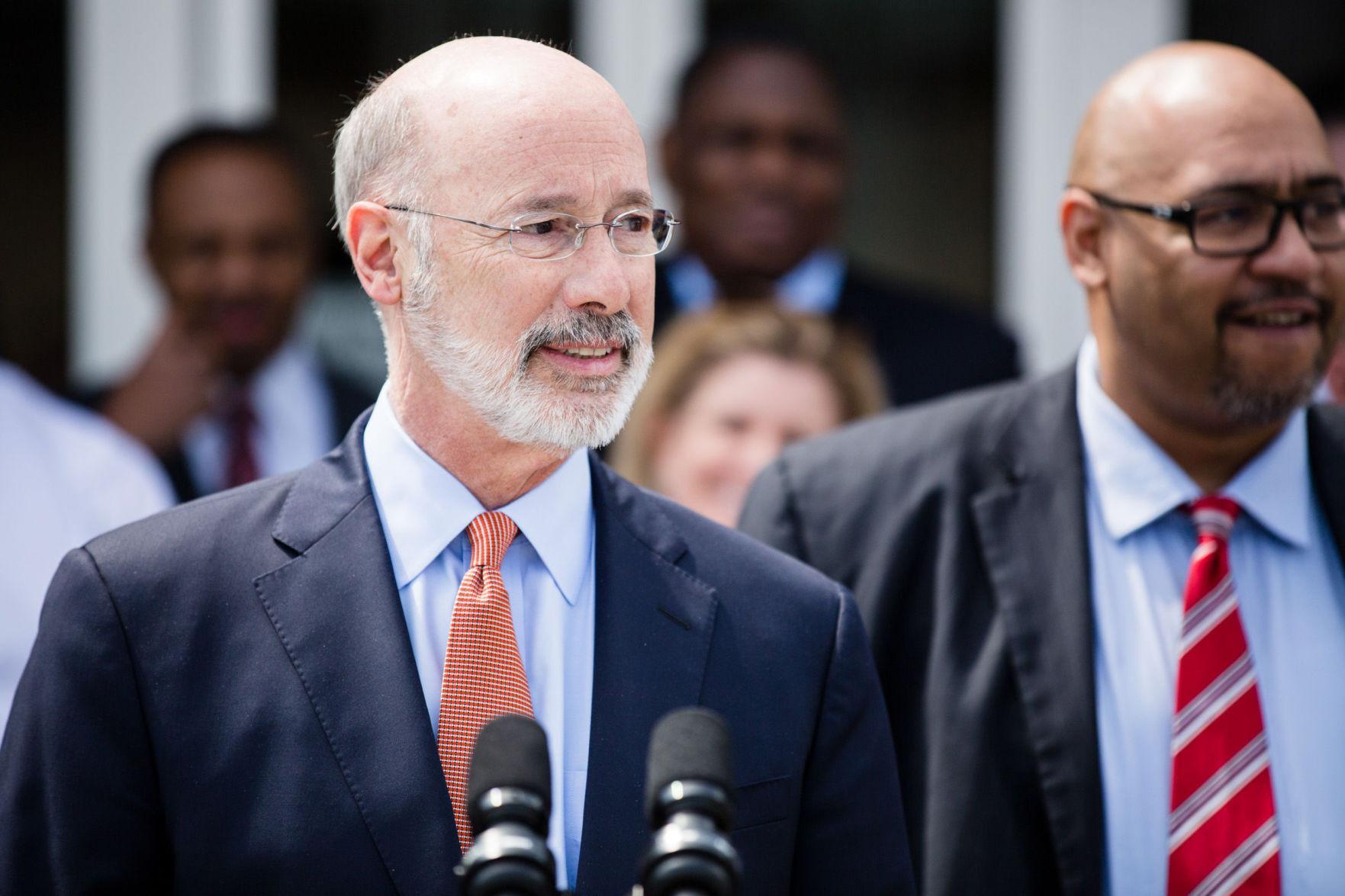 Gov. Tom Wolf is pictured during a recent event in Harrisburg.

Shown is a still video image of the suspect involved in a burglary at Indian Hills Golf Club early Sunday. Police said an unknown male used a key to gain entry into the back door of the club’s Pro Shop at 3:40 a.m. and stole multiple golf clubs of various makes and styles from the bag room before stealing additional clubs and grips from the Pro Shop itself.

SHAMOKIN TOWNSHIP — A 31-year-old Mount Carmel man has been charged with stealing a total of 96 golf clubs and golf club grips and $400 in cash from Indian Hills Golf Club on Sunday morning.

Sean Michael Fitzpatrick, of 451 W. Fourth St., was arraigned by video at 9:30 a.m. Thursday by Magisterial District Judge John Gembic III on felonies of burglary, criminal trespass, theft and receiving stolen property, and a misdemeanor of possessing an instrument of crime.

The charges were filed by Trooper Josiah Reiner, of state police at Stonington.

Fitzpatrick, who was committed to Northumberland County Jail in lieu of $10,000 cash bail, is accused of using a crow bar to gain entry into the back door of the club’s Pro Shop at 3:40 a.m. and stealing 55 golf clubs and 41 golf club grips valued at $6,100 along with $400 in cash. The assortment of golf clubs and grips were removed from the bag room and Pro Shop itself, while the cash was stolen from the office, police said.

After a public information report that provided a description of the burglar, his clothing and pictures of him from surveillance cameras was released to local media outlets Sunday, police received an anonymous call Tuesday from someone who said the burglar looked like Fitzpatrick.

On Wednesday, Reiner traveled to Fitzpatrick’s residence and observed his vehicle parked on the road and spotted multiple golf clubs through the window.

Fitzpatrick was granted permission by Reiner to say goodbye to his girlfriend, Nicole Shipe, before being taken to prison.

Upon seeing her boyfriend in handcuffs, Shipe asked, “Is this about all the golf clubs you got?” Shipe then told Reiner that there were more golf clubs in the apartment, but she didn’t know where they came from. She said Fitzpatrick told her he got the clubs from a guy in Florida.

Upon being granted permission by Shipe to search the apartment, Reiner found multiple golf clubs that he knew were stolen from the golf club and seized them as evidence.

Reiner then transported Fitzpatrick to the state police station, where Fitzpatrick admitted to committing the burglary and acting alone in the crime.

Fitzpatrick was later transported to the county jail Wednesday. 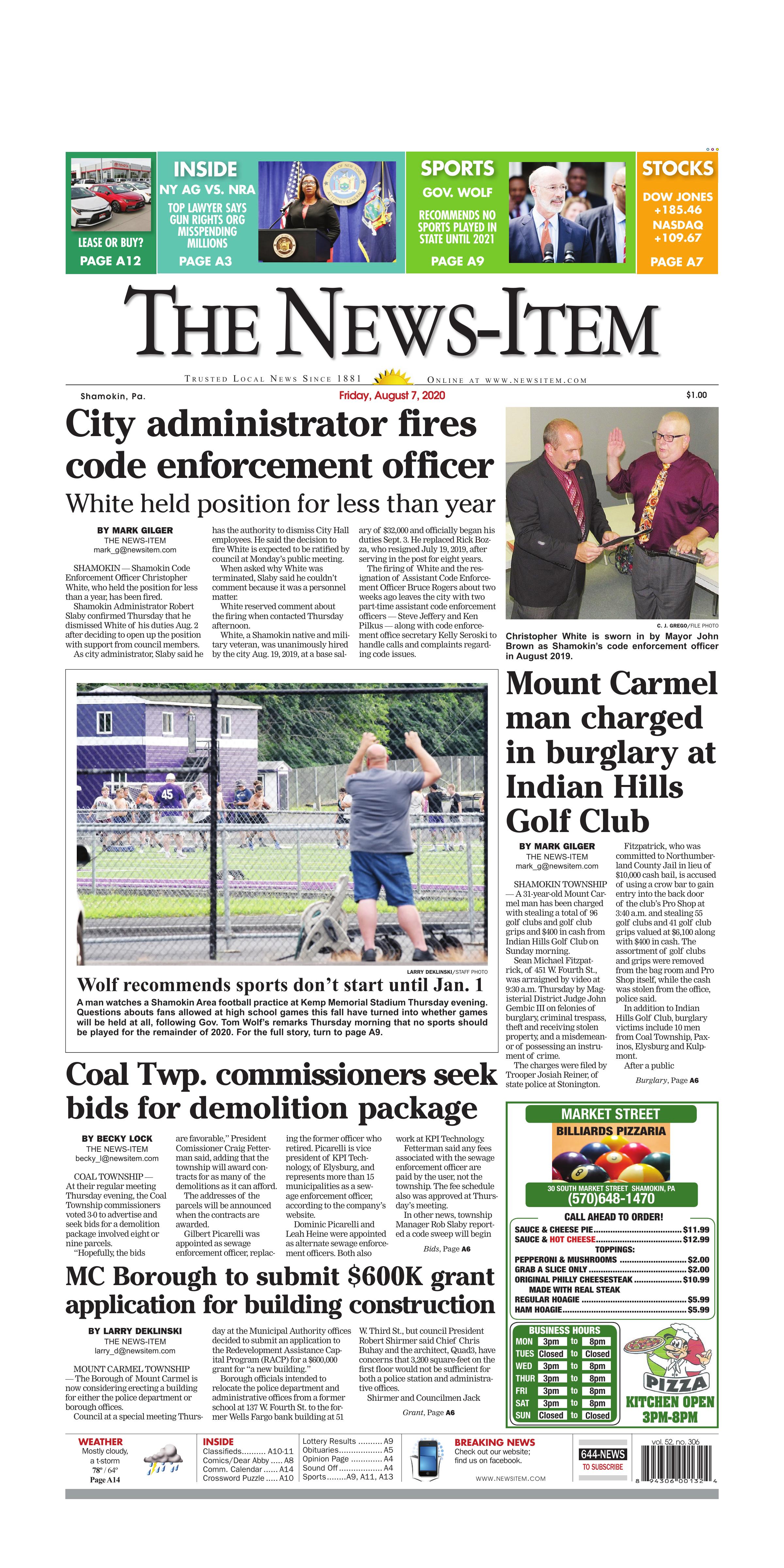