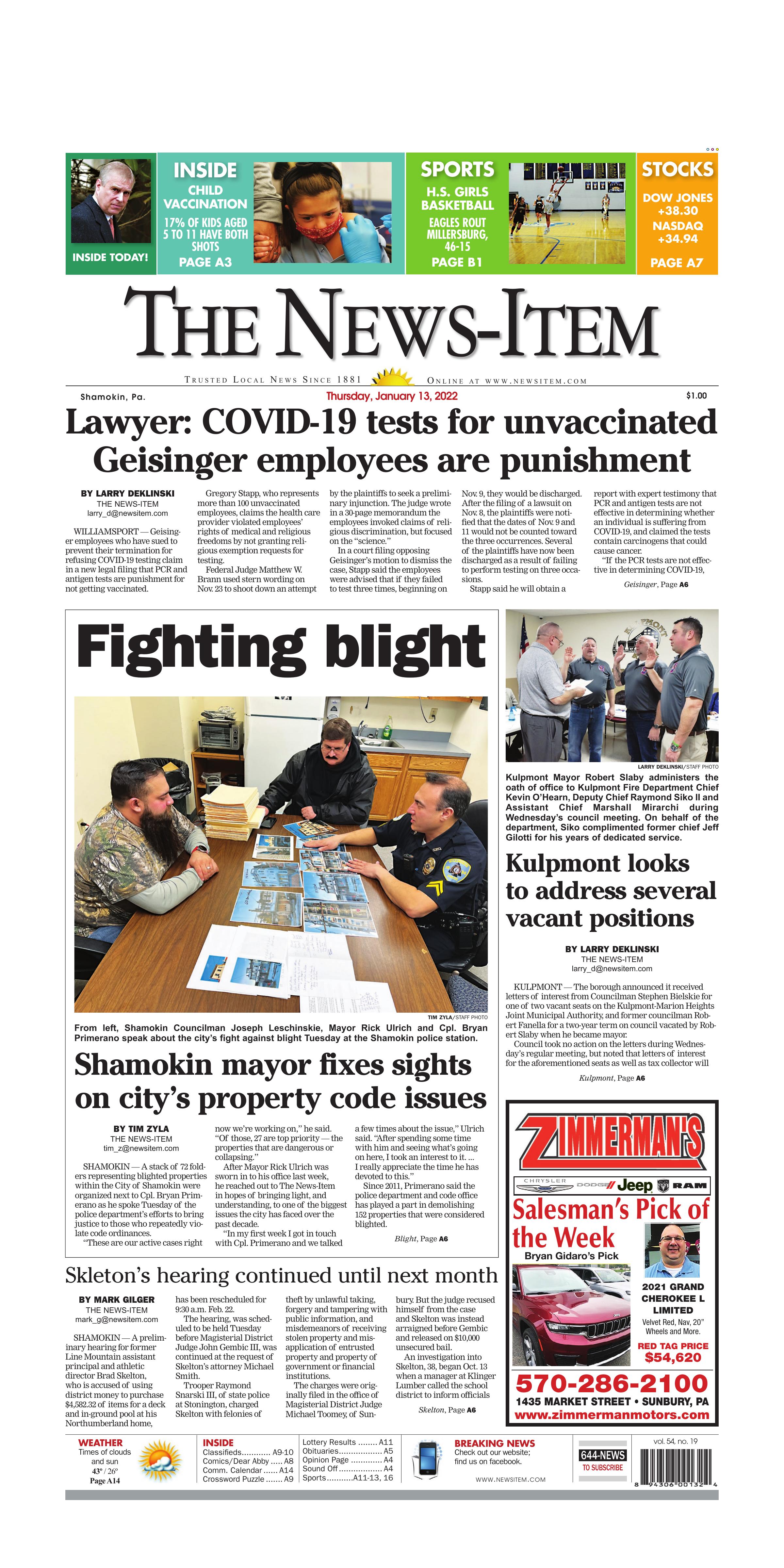 SHAMOKIN — A stack of 72 folders representing blighted properties within the City of Shamokin were organized next to Cpl. Bryan Primerano as he spoke Tuesday of the police department’s efforts to bring justice to those who repeatedly violate code ordinances.

“These are our active cases right now we’re working on,” he said. “Of those, 27 are top priority — the properties that are dangerous or collapsing.”

After Mayor Rick Ulrich was sworn in to his office last week, he reached out to The News-Item in hopes of bringing light, and understanding, to one of the biggest issues the city has faced over the past decade.

“In my first week I got in touch with Cpl. Primerano and we talked a few times about the issue,” Ulrich said. “After spending some time with him and seeing what’s going on here, I took an interest to it. ... I really appreciate the time he has devoted to this.”

Since 2011, Primerano said the police department and code office has played a part in demolishing 152 properties that were considered blighted.

“The city didn’t demolish all of them,” he explained. “Sometimes we are able to put enough pressure on owners through code violations that they eventually tore buildings down themselves.”

But, as most residents are aware, that doesn’t always happen.

“These, right now, are the worst of the worst,” Primerano said, motioning to pictures of 11 properties in the City of Shamokin that will be available for purchase at Friday’s countywide repository sale, scheduled for 10 a.m. at the county administration building in Sunbury.

Properties at the repository sale are not just in disrepair, but also are delinquent on taxes and have failed to be sold at both county upset and judicial sales. According to the county’s website, repository offerings represent the “bargain basement” of tax claim sales, with only a $500 minimum bid aimed at covering the county’s cost of the judicial sale.

Primerano said although the repository is the last line of defense in attempting to rehabilitate properties, and get them back on the tax rolls, new owners who purchase buildings often are unaware of the condition the buildings are in.

Councilman Joseph Leschinskie said that often results with owners eventually inspecting the property and giving up hope of rehabilitating it. Often times, properties that are sold at tax sales often are back up for judicial sale within two years, he said.

“People need to know what they’re buying,” he said. “It’s partially our responsibility, but the county should be working with us to say, ‘These are the conditions of the property.’”

If properties fail to sell at the repository sale, Ulrich said the city would have the option to purchase them for small amounts of money, potentially as little as $1.

He said the crux of the issue is finding sources of grant money to then have the buildings demolished, which for 11 buildings would likely cost the city a six-figure sum of money.

“In my opinion, the city needs to buy these properties and work to demolish them,” Primerano said. “No one wants these — there’s no value. I feel if the county and the city have the money to use, they need to be taken down.”

Ulrich said he agrees with the longtime officer’s assessment.

“I’m behind Cpl. Primerano and (code enforcement officer) Mr. Reed. I think we need to take a look and see what we can do to get these removed,” he said.

Primerano said not all blighted properties should be demolished, a process that over time proves expensive to taxpayers.

He said there are several steps the city takes in an attempt to work with property owners to bring the buildings into compliance.

“First, we send a warning or two,” he said. “That comes from the code office. ... If we get no response, then we start issuing citations.”

Primerano estimates about 90% of those cited for property code violations result in no response from the owners. At that point, things get more serious.

“If they don’t show up to court for those citations, then we start filing misdemeanor charges,” he said. “If those get ignored, then warrants will be issued and if you’re living in this area, we will find you and we will take you to the judge.”

At that point, he said, compliance generally hovers around the 50% range.

“That’s usually when we start getting responses from the owners, who will start to work with us on their issues,” he said. “The main thing is trying to formulate some type of plan that they can follow.”

Leschinskie said, “Getting rid of these properties will help with homeowners to drive up property values in the area. I live in a bad area of the city that used to be beautiful growing up. ... We need to work on it.”

SHAMOKIN — A preliminary hearing for former Line Mountain assistant principal and athletic director Brad Skelton, who is accused of using district money to purchase $4,582.32 of items for a deck and in-ground pool at his Northumberland home, has been rescheduled for 9:30 a.m. Feb. 22.

The hearing, was scheduled to be held Tuesday before Magisterial District Judge John Gembic III, was continued at the request of Skelton’s attorney Michael Smith.

Trooper Raymond Snarski III, of state police at Stonington, charged Skelton with felonies of theft by unlawful taking, forgery and tampering with public information, and misdemeanors of receiving stolen property and misapplication of entrusted property and property of government or financial institutions.

The charges were originally filed in the office of Magisterial District Judge Michael Toomey, of Sunbury. But the judge recused himself from the case and Skelton was instead arraigned before Gembic and released on $10,000 unsecured bail.

An investigation into Skelton, 38, began Oct. 13 when a manager at Klinger Lumber called the school district to inform officials of a purchase over its limit. The matter was turned over to district business manager Kaitlin Rosselli, who discovered the $2,258.98 order had a delivery address to Skelton’s home.

Several more orders through Klinger Lumber were found to have been sent to Skelton’s home, Snarski said.

Authorities contacted the Borough of Northumberland and learned Skelton had recently purchased a building permit for an in-ground pool and attached deck.

During the school district’s investigation, officials identified two additional suspicious purchases submitted to the school in 2018-19 and 2020-21 for locker room/training supplies in the amounts of $676.90 and $671.79, respectively.

“The items did not match anything used for stage and locker room equipment,” Snarski said in a criminal complaint. “The items of plywood, joint hangers and house wrap were consistent with a home construction project.”

State police attempted to schedule a voluntary interview with Skelton at the Stonington station. Skelton replied the following day and said he had given the meeting “a lot of thought” and he “saw no benefit to coming.”

Skelton resigned from his positions at Line Mountain during a Nov. 17 board meeting, with the resignation applying retroactively to Oct. 29.

KULPMONT — The borough announced it received letters of interest from Councilman Stephen Bielskie for one of two vacant seats on the Kulpmont-Marion Heights Joint Municipal Authority, and former councilman Robert Fanella for a two-year term on council vacated by Robert Slaby when he became mayor.

Council took no action on the letters during Wednesday’s regular meeting, but noted that letters of interest for the aforementioned seats as well as tax collector will be accepted until 4 p.m. Wednesday, Jan. 26.

By law, council has 30 days to fill the seats from the time they became vacant.

A special meeting of Kulpmont Borough Council is scheduled for 7 p.m. Jan. 26 for the purpose of appointments.

In other business, Council member Wm. Mike Bradley complimented members of the street department for their handling of the ice storm on Sunday.

“We all know that ice is way worse than snow,” he said. “They did a great job on Sunday.”

“I appreciate what those guys do for us in the borough,” Council member Joseph Dowkus stated prior to the men taking the oath of office.

On behalf of the department, Siko complimented former chief Jeff Gilotti for his years of dedicated service.

Siko also reminded residents to keep fire hydrants clear of snow, especially during the storm that is likely to impact the area Sunday into Monday.

Bielskie informed that he was approached by an individual interested in purchasing approximately 40 acres of private land just north of the former J.H. and C.K. Eagle Mill.

Council members briefly discussed who owns the property and the intent of the potential purchaser.

Solicitor Edward Greco advised council that he will be filing municipal liens against four borough properties for the cutting of grass performed throughout last year.

In other business, council:

• Announced that a food surplus will be held 8 a.m. to noon on Jan. 20 at the borough garage.

• Agreed to pay $765.73 toward ammunition for the police department.

• On the recommendation of Bradley, council agreed to open a federal surplus account that allows government agencies to purchase equipment and supplies.

• Adopted Ordinance 2022-02, which amends Ordinance 2015-08 that, among other things, establishes a residential rental housing license, registration and inspection program of all residential rental properties. Dowkus said the amendment includes a change in verbiage to reflect the inclusion of all non-occupied buildings.

Council met in executive session for 10 minutes to discuss personnel.