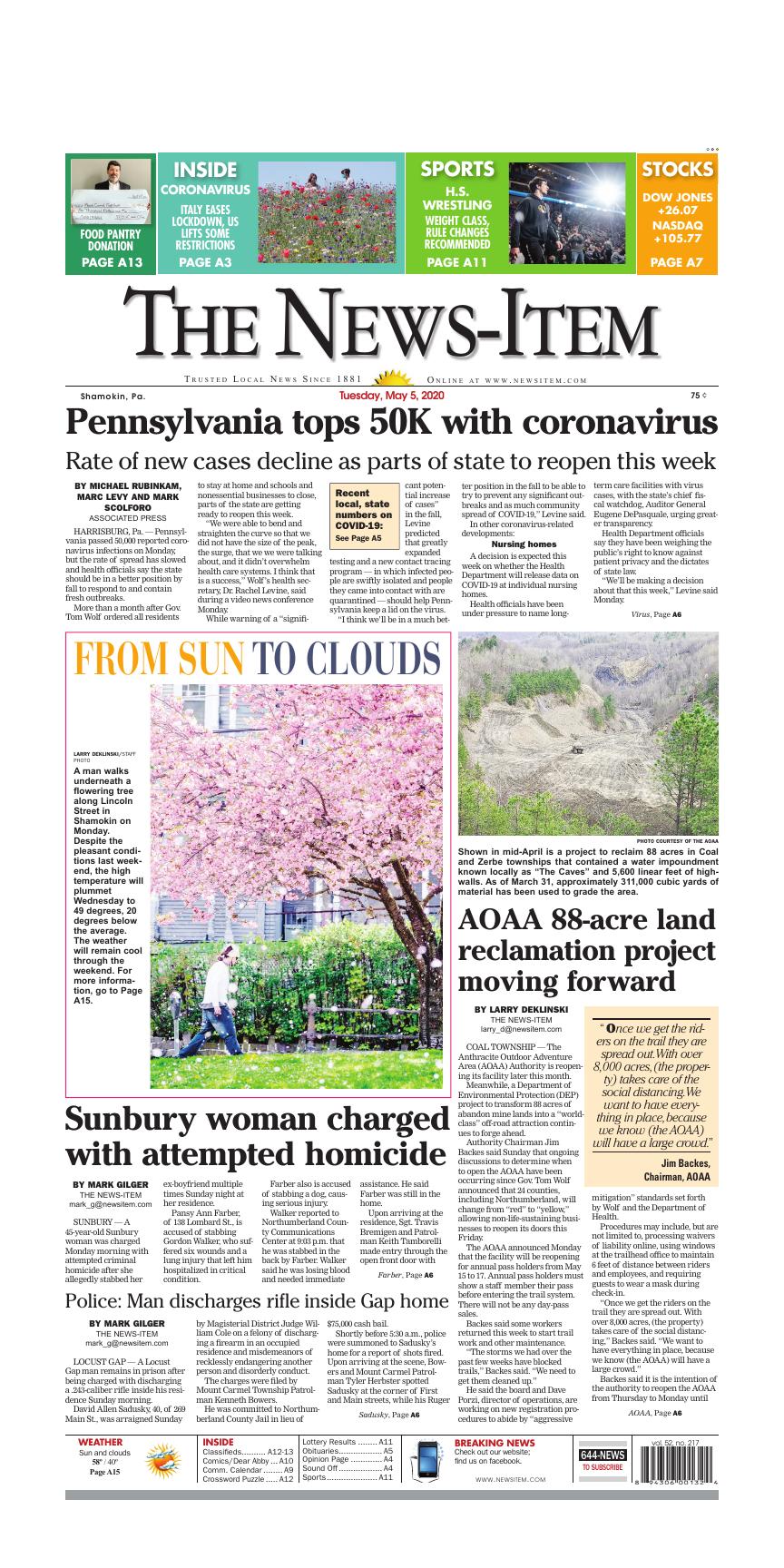 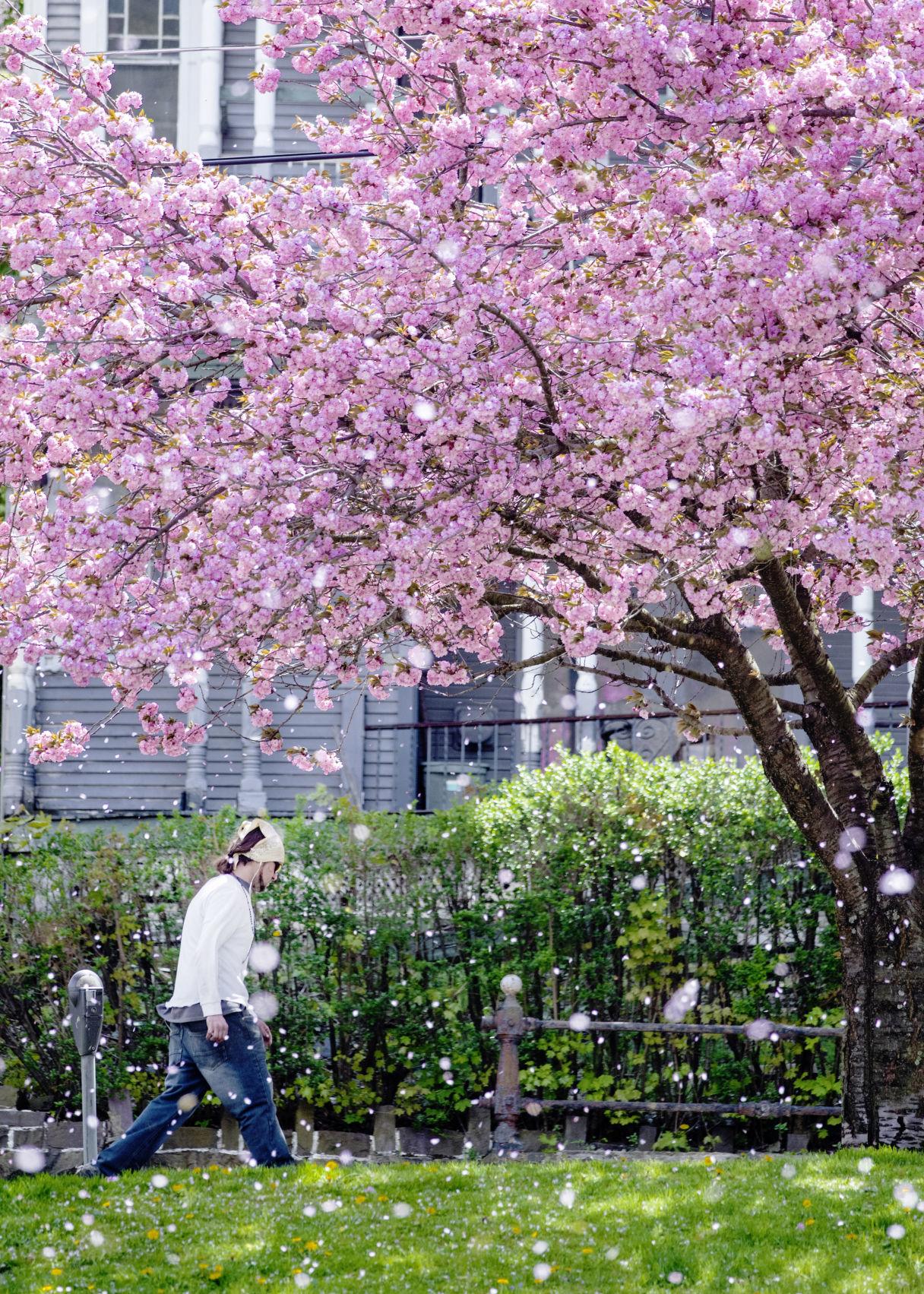 A man walks underneath a flowering tree along Lincoln Street in Shamokin on Monday. Despite the pleasant conditions last weekend, the high temperature will plummet Wednesday to 49 degrees, 20 degrees below the average. The weather will remain cool through the weekend. For more information, go to Page A15.

SUNBURY — A 45-year-old Sunbury woman was charged Monday morning with attempted criminal homicide after she allegedly stabbed her ex-boyfriend multiple times Sunday night at her residence.

Pansy Ann Farber, of 138 Lombard St., is accused of stabbing Gordon Walker, who suffered six wounds and a lung injury that left him hospitalized in critical condition.

Walker reported to Northumberland County Communications Center at 9:03 p.m. that he was stabbed in the back by Farber. Walker said he was losing blood and needed immediate assistance. He said Farber was still in the home.

Upon arriving at the residence, Sgt. Travis Bremigen and Patrolman Keith Tamborelli made entry through the open front door with handguns drawn and spotted Farber sitting on the couch drinking a beer.

Police then immediately took Farber into custody and discovered blood on her right foot, arm and night gown.

After observing blood throughout the first floor of the home and a yellow dog with blood on its fur, police located Walker on the back porch. Bremigen said Walker was bleeding heavily from his back and was treated at the scene by emergency medical personnel.

As he was being treated, Walker told police Farber used a kitchen knife to stab him several times during an argument. Walker was then transported to Geisinger Medical Center in Danville, where he underwent emergency room treatment for six stab wounds and an injury to his right lung before being admitted in critical condition.

Police said Walker was stabbed in the right scapula, right side of his chest, twice on the left shoulder and twice on his left wrist/forearm.

Police reported the dog suffered a stab wound to its right shoulder and underwent treatment at Sunbury Animal Hospital.

Other animals were removed from the home and transported to Sunbury Animal Hospital.

Farber invoked her right to remain silent upon being taken to Sunbury Police Station for questioning.

In addition criminal attempt to commit homicide, Farber is charged by Bremigen and Patrolman Dara Golden-Kieski with felonies of aggravated assault (two counts) and misdemeanors of possessing an instrument of crime, recklessly endangering another person, simple assault and cruelty to animals.

She was arraigned at 9:30 a.m. Monday by Magisterial District Judge Michael Toomey and committed to Northumberland County Jail in lieu of $500,000 cash bail. She is scheduled to face a preliminary hearing at 11 a.m Tuesday, May 12.

LOCUST GAP — A Locust Gap man remains in prison after being charged with discharging a .243-caliber rifle inside his residence Sunday morning.

David Allen Sadusky, 40, of 269 Main St., was arraigned Sunday by Magisterial District Judge William Cole on a felony of discharging a firearm in an occupied residence and misdemeanors of recklessly endangering another person and disorderly conduct.

He was committed to Northumberland County Jail in lieu of $75,000 cash bail.

Shortly before 5:30 a.m., police were summoned to Sadusky’s home for a report of shots fired. Upon arriving at the scene, Bowers and Mount Carmel Patrolman Tyler Herbster spotted Sadusky at the corner of First and Main streets, while his Ruger American .243-caliber rifle and Stevens double-barrel, 12-gauge shotgun were found on his front porch.

Police then took Sadusky into custody, secured the firearms and entered his home.

Police reported Sadusky stated, “I shot through the floor here,” while showing officers where a bullet struck the floor.

Sadusky said he woke up around 4:30 a.m. and thought someone was in his house. Sadusky said he then retrieved his rifle from a gun cabinet and began to inspect the home before discharging the weapon at his front door.

Sadusky later told police he thought his ex-wife, who no longer lives in the area, was inside the house. Sadusky said he was chasing shadows through his house.

A woman who lives in the half double next to Sadusky told police she heard a loud bang at 5:30 a.m. while she was in bed. Another neighbor said he heard a gunshot and upon exiting his home, saw Sadusky walking back and forth and in and out of his house waving a rifle in the air. 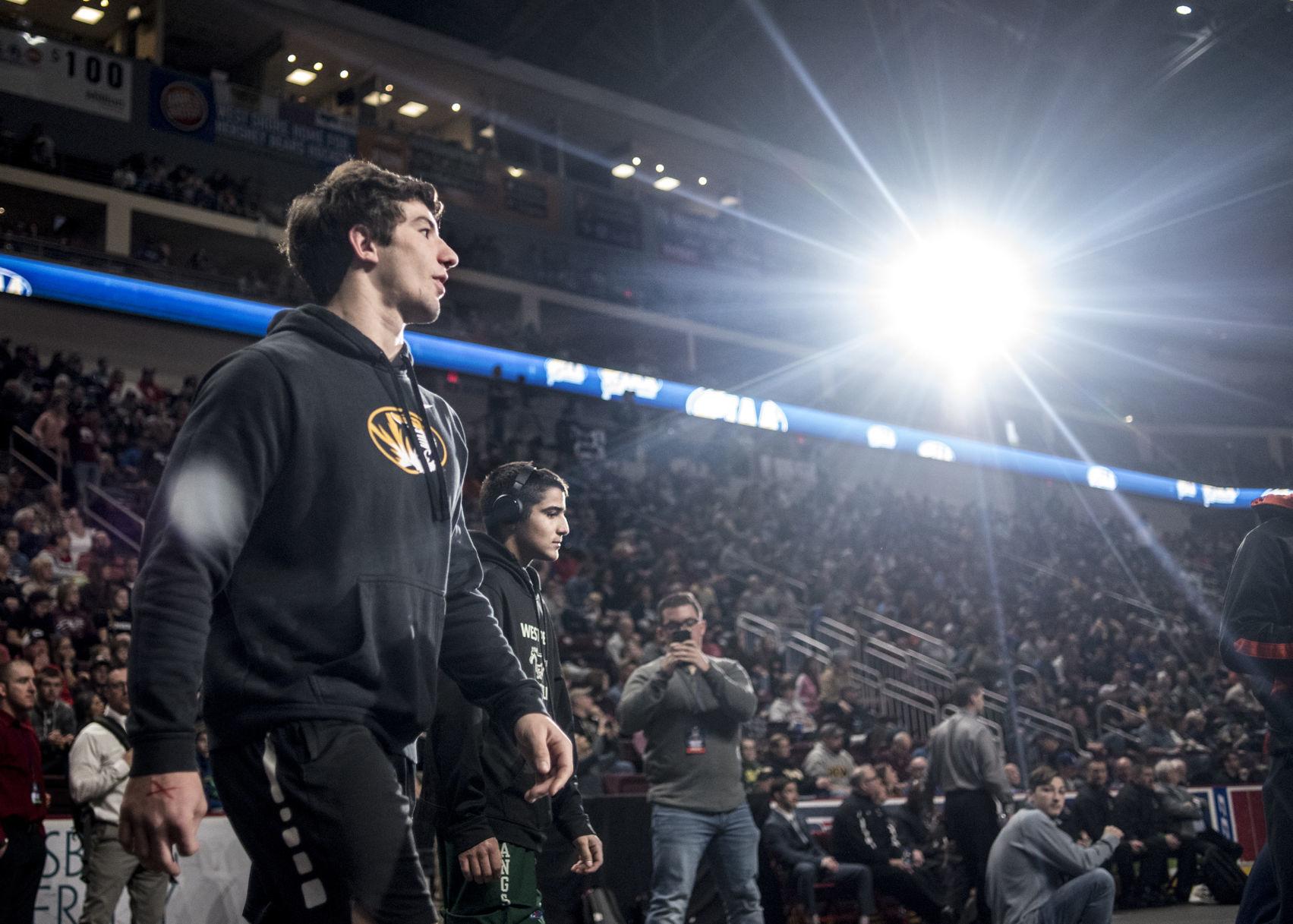 Southern Columbia’s Gaige Garcia walks onto the mat during the Parade of Champions at the PIAA Class 2A Wrestling Championships Saturday afternoon at the Giant Center in Hershey. Garcia defeated Reynolds’ Braydon Herbster in the 195-pound championship bout.

Shown in mid-April is a project to reclaim 88 acres in Coal and Zerbe townships that contained a water impoundment known locally as “The Caves” and 5,600 linear feet of highwalls. As of March 31, approximately 311,000 cubic yards of material has been used to grade the area.

Shown in late April is a project to reclaim 88 acres in Coal and Zerbe townships that contained a water impoundment known locally as “The Caves” and 5,600 linear feet of highwalls. As of March 31, approximately 311,000 cubic yards of material has been used to grade the area.

Meanwhile, a Department of Environmental Protection (DEP) project to transform 88 acres of abandon mine lands into a “world-class” off-road attraction continues to forge ahead.

Authority Chairman Jim Backes said Sunday that ongoing discussions to determine when to open the AOAA have been occurring since Gov. Tom Wolf announced that 24 counties, including Northumberland, will change from “red” to “yellow,” allowing non-life-sustaining businesses to reopen its doors this Friday.

The AOAA announced Monday that the facility will be reopening for annual pass holders from May 15 to 17. Annual pass holders must show a staff member their pass before entering the trail system. There will not be any day-pass sales.

Backes said some workers returned this week to start trail work and other maintenance.

“The storms we had over the past few weeks have blocked trails,” Backes said. “We need to get them cleaned up.”

He said the board and Dave Porzi, director of operations, are working on new registration procedures to abide by “aggressive mitigation” standards set forth by Wolf and the Department of Health.

Procedures may include, but are not limited to, processing waivers of liability online, using windows at the trailhead office to maintain 6 feet of distance between riders and employees, and requiring guests to wear a mask during check-in.

“Once we get the riders on the trail they are spread out. With over 8,000 acres, (the property) takes care of the social distancing,” Backes said. “We want to have everything in place, because we know (the AOAA) will have a large crowd.”

Backes said it is the intention of the authority to reopen the AOAA from Thursday to Monday until members feel comfortable with expanding to seven days a week.

He said the Coal Mountain Jeep Jamboree for May has been canceled, but the authority and Jeep Jamboree USA are hopeful a ride scheduled for this summer will still take place.

Backes said the Trailhead Campground on AOAA grounds reopened as a result of Wolf’s decision to allow recreational facilities, such as golf courses and privately-owned campgrounds, to open back up for business on Friday.

The 3.1-mile walking/wellness trail continues to remain open from dawn to dusk for all visitors.

A roughly $10.5 million project to remove abandoned mine features near the Whaleback and create 4,370 feet of ATV trails and 6,600 feet of extreme Jeep crawling trails has continued during the pandemic.

The water impoundment known locally as “The Caves” has disappeared from the landscape, courtesy of rock and dirt from a nearby slag pile. As of March 31, approximately 311,000 cubic yards of material has been used to grade the area, Megan Lehman, community relations coordinator for DEP, said Sunday.

It has been estimated that a total of 2.8 million cubic yards of material from the pile will be used to grade 88 acres in Coal and Zerbe townships that contained the former swimming hole and 5,600 linear feet of highwalls.

“The contracted work is approximately 13% complete, with a completion date of Feb. 10, 2022,” she said Sunday.

When grading is completed, thousands of large boulders that range in size from dishwashers to vehicles will be positioned to create an extreme Jeep trail that AOAA officials hope will be compared to the Rubicon Trail, a 22-mile route through the Sierra Nevada chock-full of some of the most technical off-road driving in the country.

Additional work includes demolition of an abandoned mine building, removal of garbage, seeding of grass and trees, and the placement of brush piles to promote wildlife. Once the pile is removed, a parking lot consisting of 2A stone (150-by-300 foot) and a grass helicopter pad (100-by-100 foot) will take its place.

The project, which started in August and is expected to last 30 months, is funded through the U.S. Department of the Interior’s Office of Surface Mining Reclamation and Enforcement’s Abandoned Mine Land Grant Fund. 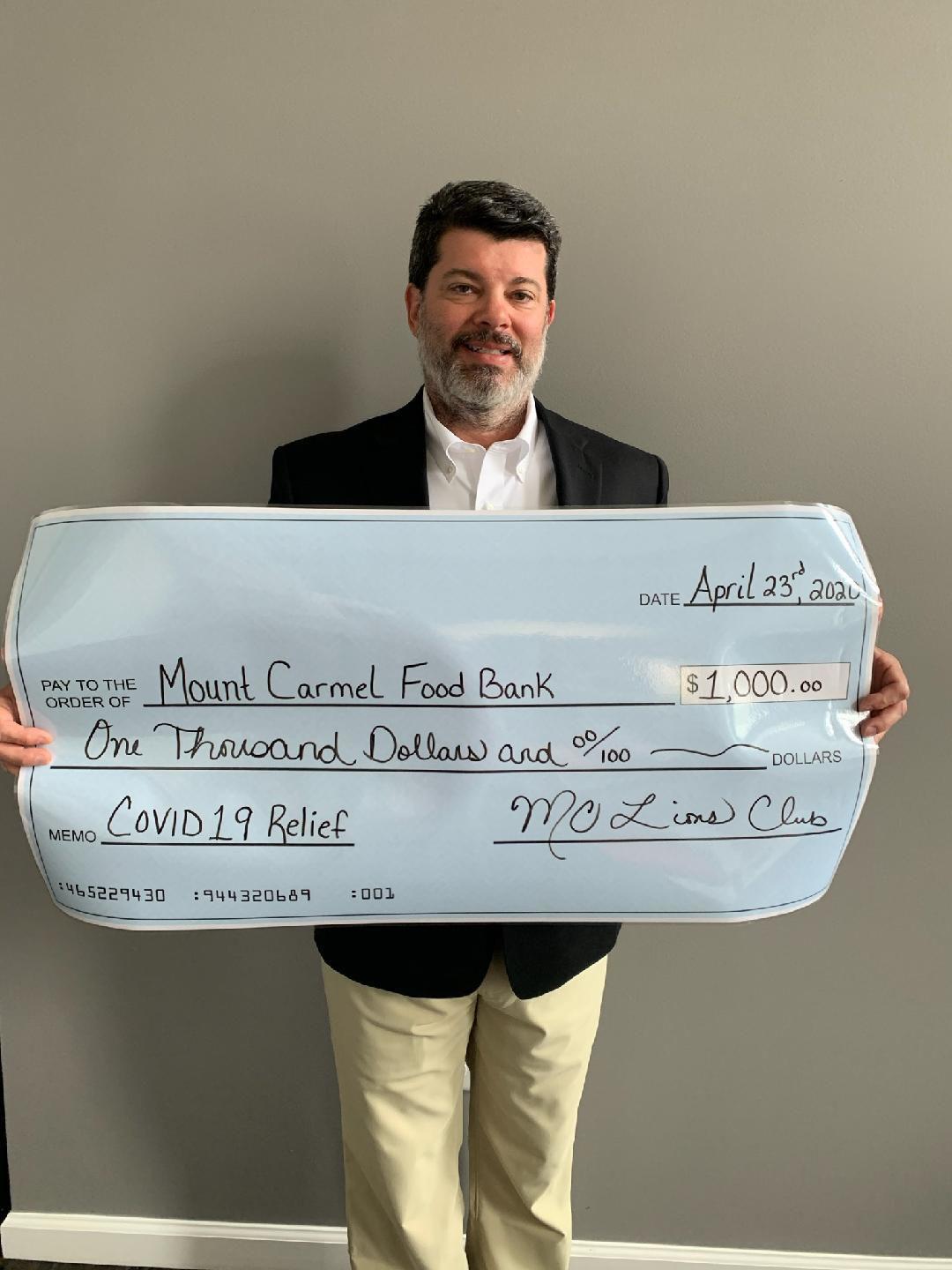 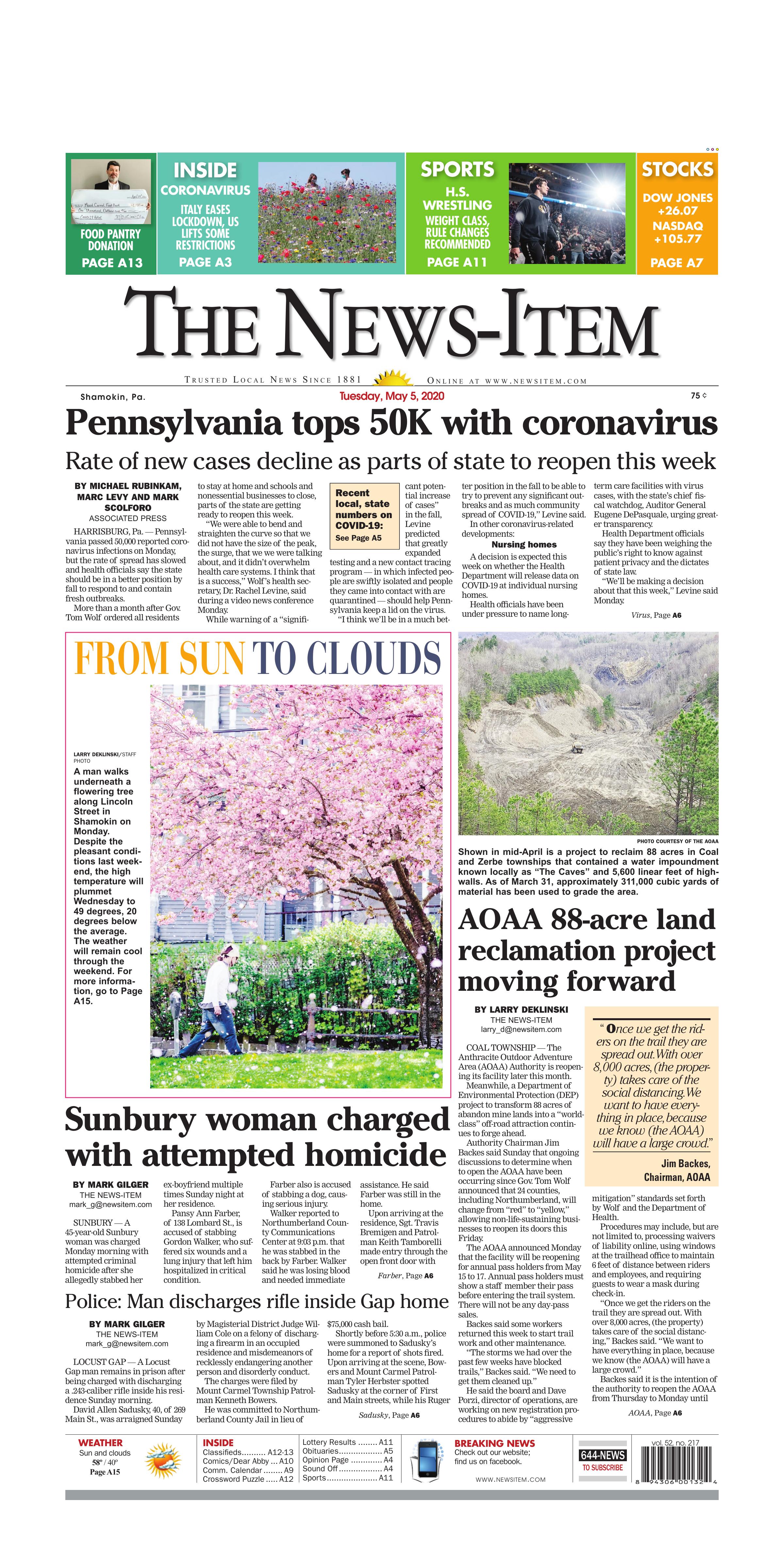