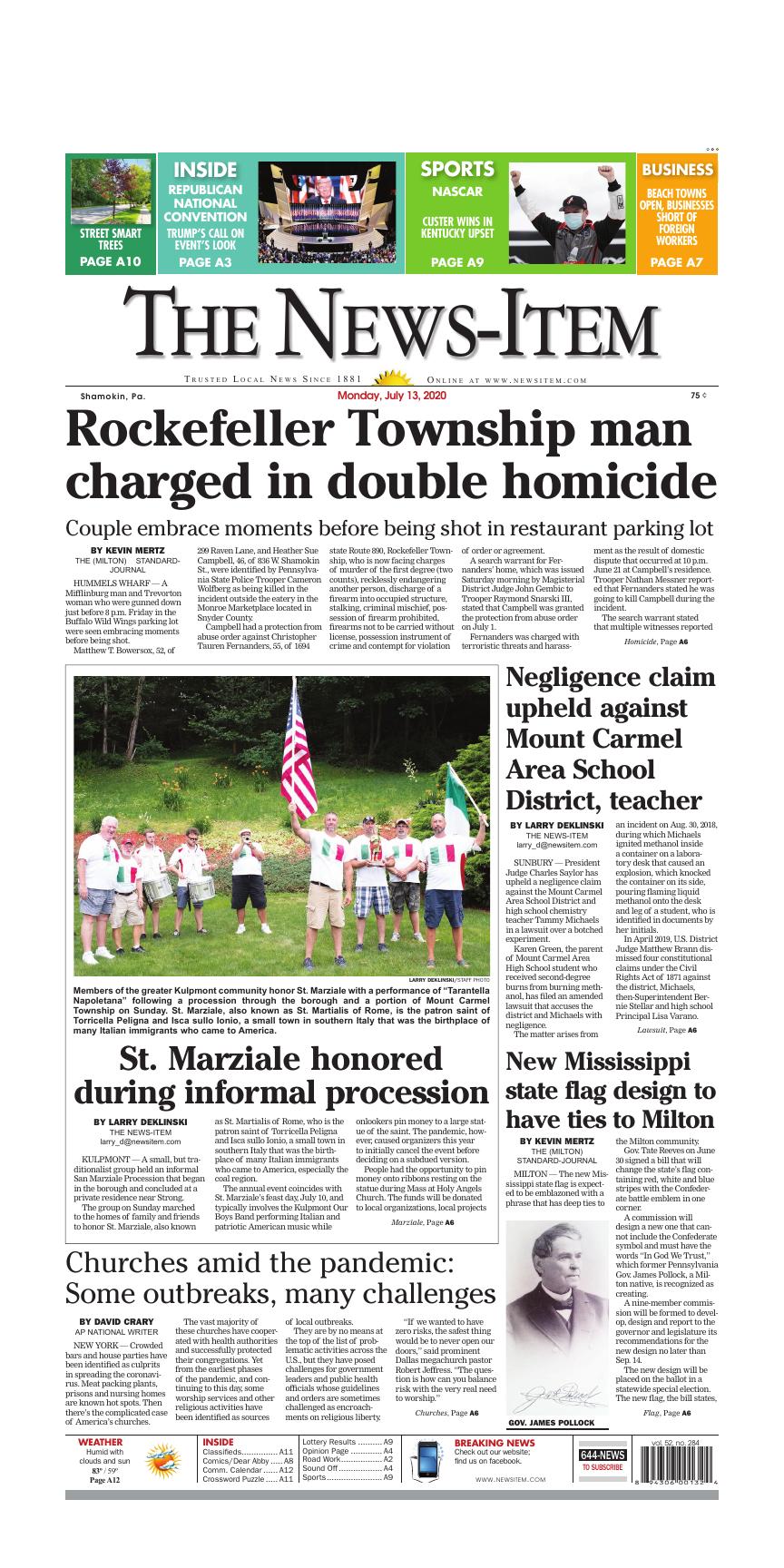 HUMMELS WHARF — A Mifflinburg man and Trevorton woman who were gunned down just before 8 p.m. Friday in the Buffalo Wild Wings parking lot were seen embracing moments before being shot.

Matthew T. Bowersox, 52, of 299 Raven Lane, and Heather Sue Campbell, 46, of 836 W. Shamokin St., were identified by Pennsylvania State Police Trooper Cameron Wolfberg as being killed in the incident outside the eatery in the Monroe Marketplace located in Snyder County.

Campbell had a protection from abuse order against Christopher Tauren Fernanders, 55, of 1694 state Route 890, Rockefeller Township, who is now facing charges of murder of the first degree (two counts), recklessly endangering another person, discharge of a firearm into occupied structure, stalking, criminal mischief, possession of firearm prohibited, firearms not to be carried without license, possession instrument of crime and contempt for violation of order or agreement.

A search warrant for Fernanders’ home, which was issued Saturday morning by Magisterial District Judge John Gembic to Trooper Raymond Snarski III, stated that Campbell was granted the protection from abuse order on July 1.

Fernanders was charged with terroristic threats and harassment as the result of domestic dispute that occurred at 10 p.m. June 21 at Campbell’s residence. Trooper Nathan Messner reported that Fernanders stated he was going to kill Campbell during the incident.

The search warrant stated that multiple witnesses reported seeing Bowersox and Campbell embracing in the restaurant’s parking lot when a man, later identified as Fernanders, exited a Black Dodge Ram and allegedly started shooting a semi-automatic handgun toward Bowersox and Campbell, who were heard screaming.

Bowersox, the warrant said, was seen running along the front of the restaurant with Fernanders following. Three more shots were then heard. As Fernanders returned to his vehicle, Troy Sprenkle, 49, exited the restaurant and fired three to four shots at Fernanders.

According to Trooper Cameron Wolfberg, an unidentified restaurant patron, believed to be Sprenkle, intervened in the situation and shot the suspect, causing a serious injury.

One witness, Toby Gearheart, told police that when the situation was “neutralized” he, his wife and other patrons started administering medical assistance to Bowersox and Campbell, the search warrant stated.

A post made Saturday on the Art of Living Design Facebook page noted that the business had lost one of its own “family members,” and referenced Bowersox.

“Matt (had) the brightest personality and the biggest heart,” the post stated. “His smile. His charm. His charisma. His witty comebacks. His nicknames for us. We will miss all of his endearing qualities.

“He loved his beautiful daughters, and would always speak of them! He was so proud of his girls! Our deepest sympathies go out to his daughters, his parents, his sister, his family members, his friends and his work family at Brookside Homes and Modern Heritage.”

Members of the greater Kulpmont community honor St. Marziale with a performance of “Tarantella Napoletana” following a procession through the borough and a portion of Mount Carmel Township on Sunday. St. Marziale, also known as St. Martialis of Rome, is the patron saint of Torricella Peligna and Isca sullo Ionio, a small town in southern Italy that was the birthplace of many Italian immigrants who came to America.

KULPMONT — A small, but traditionalist group held an informal San Marziale Procession that began in the borough and concluded at a private residence near Strong.

The group on Sunday marched to the homes of family and friends to honor St. Marziale, also known as St. Martialis of Rome, who is the patron saint of Torricella Peligna and Isca sullo Ionio, a small town in southern Italy that was the birthplace of many Italian immigrants who came to America, especially the coal region.

The annual event coincides with St. Marziale’s feast day, July 10, and typically involves the Kulpmont Our Boys Band performing Italian and patriotic American music while onlookers pin money to a large statue of the saint. The pandemic, however, caused organizers this year to initially cancel the event before deciding on a subdued version.

People had the opportunity to pin money onto ribbons resting on the statue during Mass at Holy Angels Church. The funds will be donated to local organizations, local projects and also needy members of the community.

Nick Letcavage had the privilege of holding a smaller statue of St. Marziale as the group traveled through the borough. Flag bearers of the Italian and American flags included Andy Procopio and Tom Letcavage.

The group then traveled southbound on state Route 61 toward the home of Tony and Joanne Lentini, of Strong, where a rousing rendition of “Tarantella Napoletana” was performed by Bernie and Vic Nestico on the snare drums and Greg Santel on the trumpet.

St. Marziale was the youngest of seven sons — known as the seven martyrs — of St. Felicitas. According to legend, in the 19th century there was a serious drought in the area of Torricella. Two men wandering through a shop specializing in statues of saints fell into a debate on what saint or beati could best intervene for the town to end the drought. One of the men’s cape was suddenly caught on the extended arm of a statue of Marziale. They took this as a sign, and Marziale became the patron of Torricella.

Karen Green, the parent of Mount Carmel Area High School student who received second-degree burns from burning methanol, has filed an amended lawsuit that accuses the district and Michaels with negligence.

The matter arises from an incident on Aug. 30, 2018, during which Michaels ignited methanol inside a container on a laboratory desk that caused an explosion, which knocked the container on its side, pouring flaming liquid methanol onto the desk and leg of a student, who is identified in documents by her initials.

The judge declined to exercise supplemental jurisdiction over the remaining state law claims of negligence and intentional infliction of emotional distress. Green reasserted those claims in Northumberland County Court of Common Pleas.

The defendants’ attorney, Richard A. Polacheck, of Polacheck Law Firm, had argued that Michaels was provided immunity because the suit did not sufficiently set forth conduct that could be deemed as willful misconduct, which the courts have defined as “conduct whereby the actor desired to bring about the result that followed or at least was aware that it was substantially certain to follow.”

Saylor ruled that the negligence claim falls within the real property exception to governmental immunity as set forth in the state’s Political Subdivision Tort Claims Act. He ordered Green to file an amended complaint.

The plaintiff, the judge noted, has alleged various defects of the classroom, including a lack of a safety hood or protective barrier on the laboratory desk, no protective equipment (such as googles), a fire blanket that was not readily accessible and a non-functional shower.

“At oral argument, defense council raised an argument, not set forth in the brief, that defendant Tammy Michaels did not have care, custody or control of the classroom property,” Saylor stated. “This court rejects that notion as untenable. This is her work environment as to which the chemistry teacher would be the most knowledgable regarding proper safety conditions for her students.”

The defendants on April 29 filed a motion to reconsider the order on claims that Michaels should have been dismissed from the lawsuit because the willful misconduct exception to immunity was withdrawn. Saylor denied the motion on May 15.

The amended complaint claims Michaels poured methanol into a container on the desk and then attempted to ignite it with a match. Not achieving the ordinary result, she poured an additional “excessive” quantity of methanol into the container and, again, attempted to light it. The second attempt caused an immediate explosion that knocked the container over, spilling flaming liquid methanol. The student attempted to get away from her burning desk, but fell to the ground near a burning puddle of methanol.

Students attempted to render aid to the victim by using the classroom’s fire blanket, but it had never been removed from its shipping container and neither Michaels nor any of the students were able to remove it. The classroom’s chemical shower had not been functional for the two years preceding the accident, the suit claims.

“Defendant Tammy Michaels exercised care, custody or control over the subject chemistry classroom,” the amended complaint states. “The school district had a duty to design, construct, maintain and control its chemistry classroom in a condition safe for the activities for which it was regularly used, intended to be used or reasonably foreseen to be used, including the experiment performed by Ms. Michaels.”

The plaintiff demands damages against the defendants in an amount in excess of $50,000.

MILTON — The new Mississippi state flag is expected to be emblazoned with a phrase that has deep ties to the Milton community.

Gov. Tate Reeves on June 30 signed a bill that will change the state’s flag containing red, white and blue stripes with the Confederate battle emblem in one corner.

A commission will design a new one that cannot include the Confederate symbol and must have the words “In God We Trust,” which former Pennsylvania Gov. James Pollock, a Milton native, is recognized as creating.

A nine-member commission will be formed to develop, design and report to the governor and legislature its recommendations for the new design no later than Sep. 14.

The new design will be placed on the ballot in a statewide special election. The new flag, the bill states, will honor the past while embracing “the promise of the future.”

In 2014, a celebration was held in Milton to mark the 150th anniversary of the phrase “In God We Trust” being placed on U.S. currency.

Pollock was director of the U.S. Mint when the phrase was formally approved to be placed on the currency, on April 22, 1864.

During a 2017 lecture presented by the Milton Historical Society, historian Glen Bayly appeared as Pollock.

In the midst of the Civil War, Bayly said Pollock was instructed to prepare a motto which could be used on the coins.

“The heartbreak of war led to a discussion that God should be recognized,” Bayly said during the lecture. “We claim to be a Christian nation... our coinage should display this.”

The motto “Our Country, Our God, Our Trust” quickly evolved into “In God We Trust.”

“We like to say everyone who carries a coin in their pocket carries a part of Milton with them,” Bayly said, during the lecture.

Pollock was born Sept. 11, 1810, and attended Kirkpatrick Academy in Milton. He graduated from Princeton College in 1831.

• 1844 to 1849: Elected as a Whig to U.S. Congress — supported telegraph inventor Samuel Morse and advocated for a transcontinental railroad.

• 1851: Appointed president judge of the Eighth Judicial District of Pennsylvania.

Pollock and his wife, Sarah Ann Hepburn, had three sons and five daughters. He died April 19, 1890, and is buried in the Milton Cemetery. 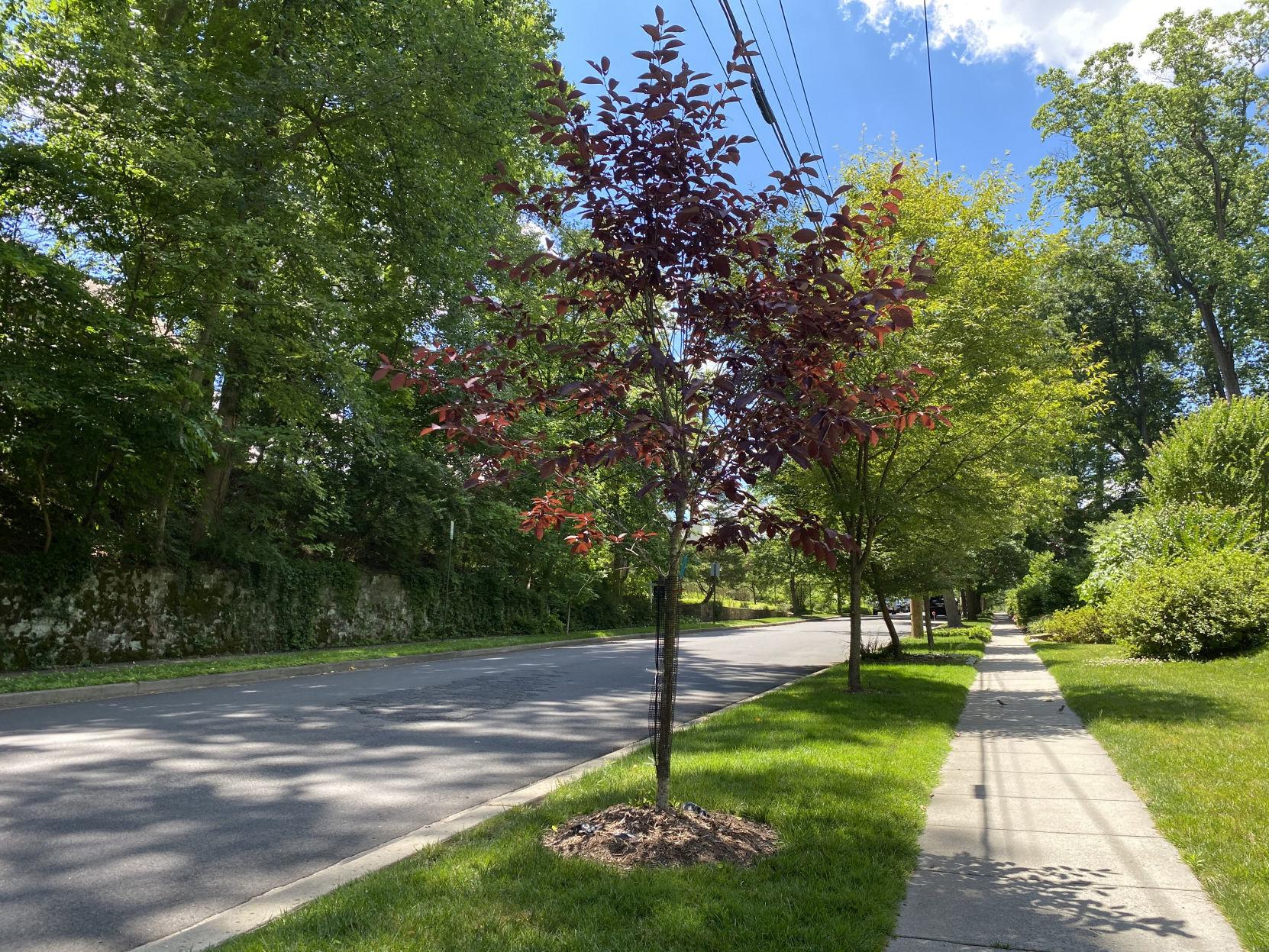 Urban foresters are turning to new varieties to diversify the mix of street trees. Washington, D.C., has used small- and medium-size trees for planting under power lines. One example is the Canada Red chokecherry on Garfield Street NW.