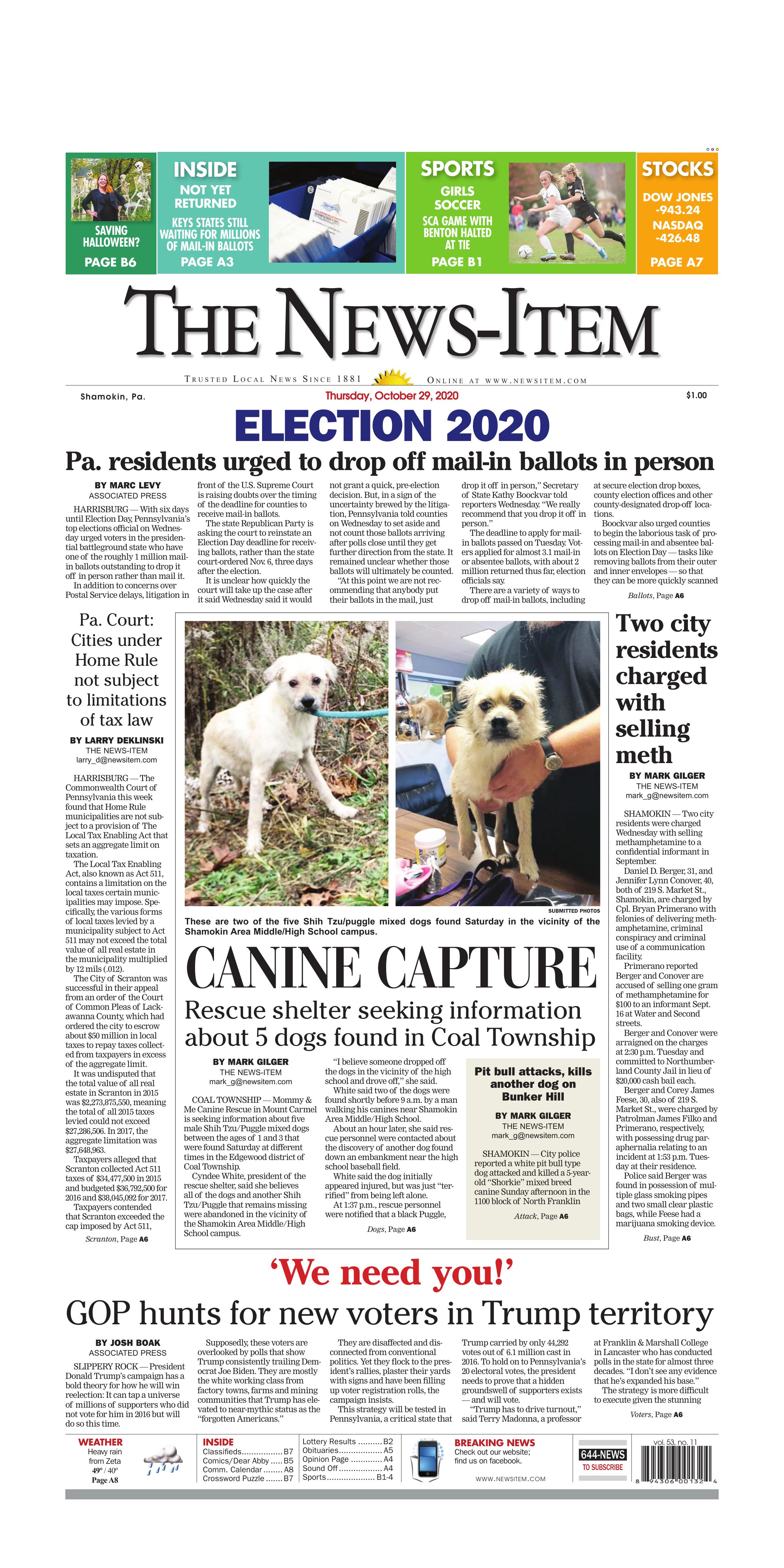 These are two of the five Shih Tzu/puggle mixed dogs found Saturday in the vicinity of the Shamokin Area Middle/High School campus.

COAL TOWNSHIP — Mommy & Me Canine Rescue in Mount Carmel is seeking information about five male Shih Tzu/Puggle mixed dogs between the ages of 1 and 3 that were found Saturday at different times in the Edgewood district of Coal Township.

Cyndee White, president of the rescue shelter, said she believes all of the dogs and another Shih Tzu/Puggle that remains missing were abandoned in the vicinity of the Shamokin Area Middle/High School campus.

“I believe someone dropped off the dogs in the vicinity of the high school and drove off,” she said.

White said two of the dogs were found shortly before 9 a.m. by a man walking his canines near Shamokin Area Middle/High School.

About an hour later, she said rescue personnel were contacted about the discovery of another dog found down an embankment near the high school baseball field.

White said the dog initially appeared injured, but was just “terrified” from being left alone.

At 1:37 p.m., rescue personnel were notified that a black Puggle, believed to be the sire of the puppies, was spotted sitting on a window sill at a home across the street from the parking lot at Our Lady of Lourdes Regional High School.

The fifth dog, which was found on the grounds of Fairview Gun Club at about 6 p.m., had an eye injury and ticks from being in the wooded area.

The other four dogs appeared healthy.

On Monday afternoon, another puppy was spotted in a yard in the 1400 block of West Lynn Street near Coal Township Elderly Housing. Mommy & Me Canine Rescue personnel and neighbors chased after the dog in an attempt to capture it, but the canine fled from the area and was last seen in the 1600 block of West Pine Street.

White said all of the dogs have been or will be evaluated by a veterinarian.

She said the five dogs were the most rescued by the canine shelter in one day.

Coal Township police were contacted about the discovery of the dogs and are investigating if they were abandoned by their owner(s) or lost in the woods.

White said Mommy & Me Canine Rescue is seeking donations for the recently found puppies and other dogs at the shelter.

She said the rescue shelter will host a Chinese auction Nov. 13, 14 and 15 at the American Legion in Atlas to raise funds. 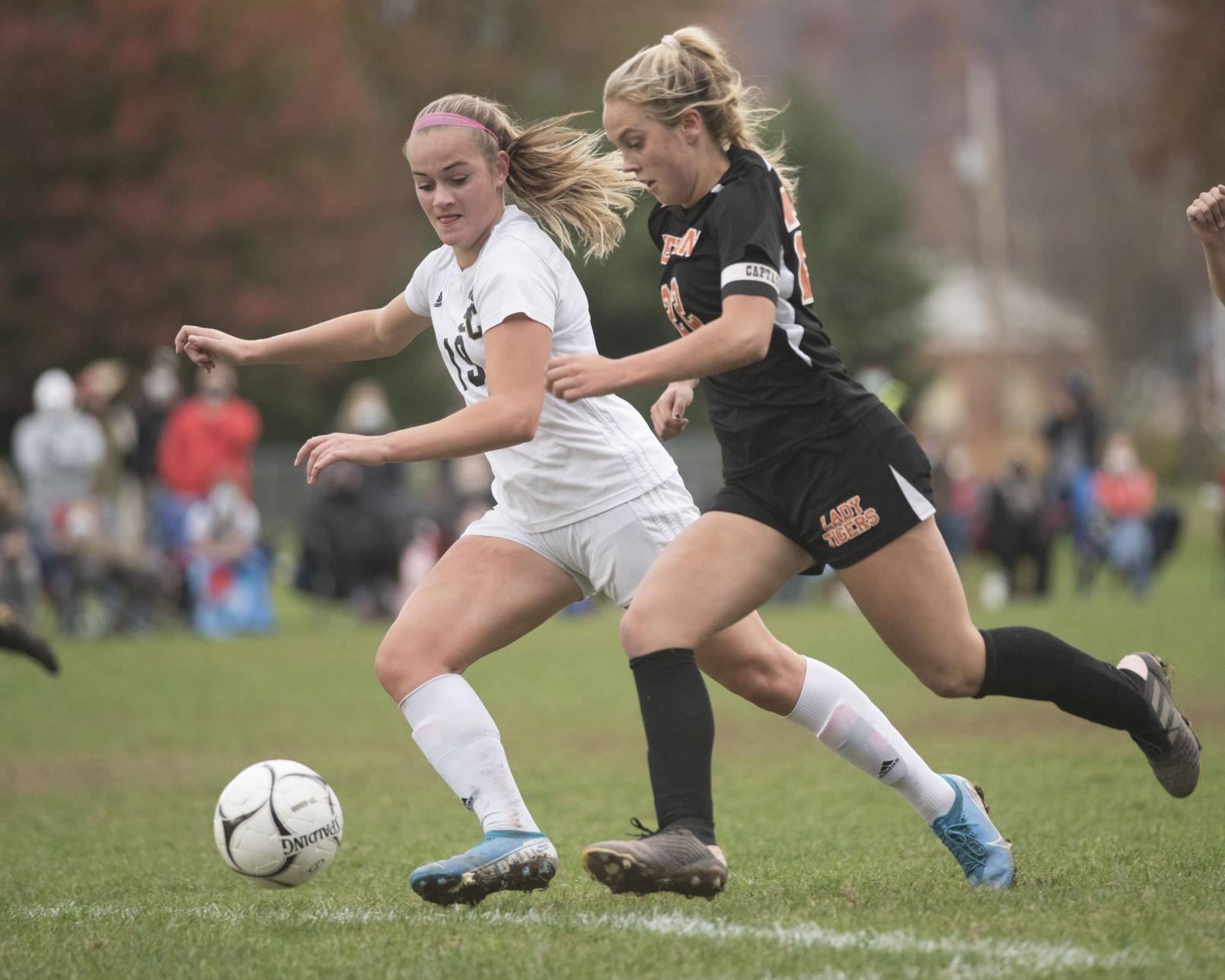 A “Shorkie” is a cross between a Shih Tzu and Yorkshire Terrier dog.

Martz told police she was cutting her grass when her pit bull got out of the house through an open door.

Police said Martz admitted that her dog is not licensed and is not up to date with its rabies vaccination.

Police said the case has been forwarded to the state dog warden. 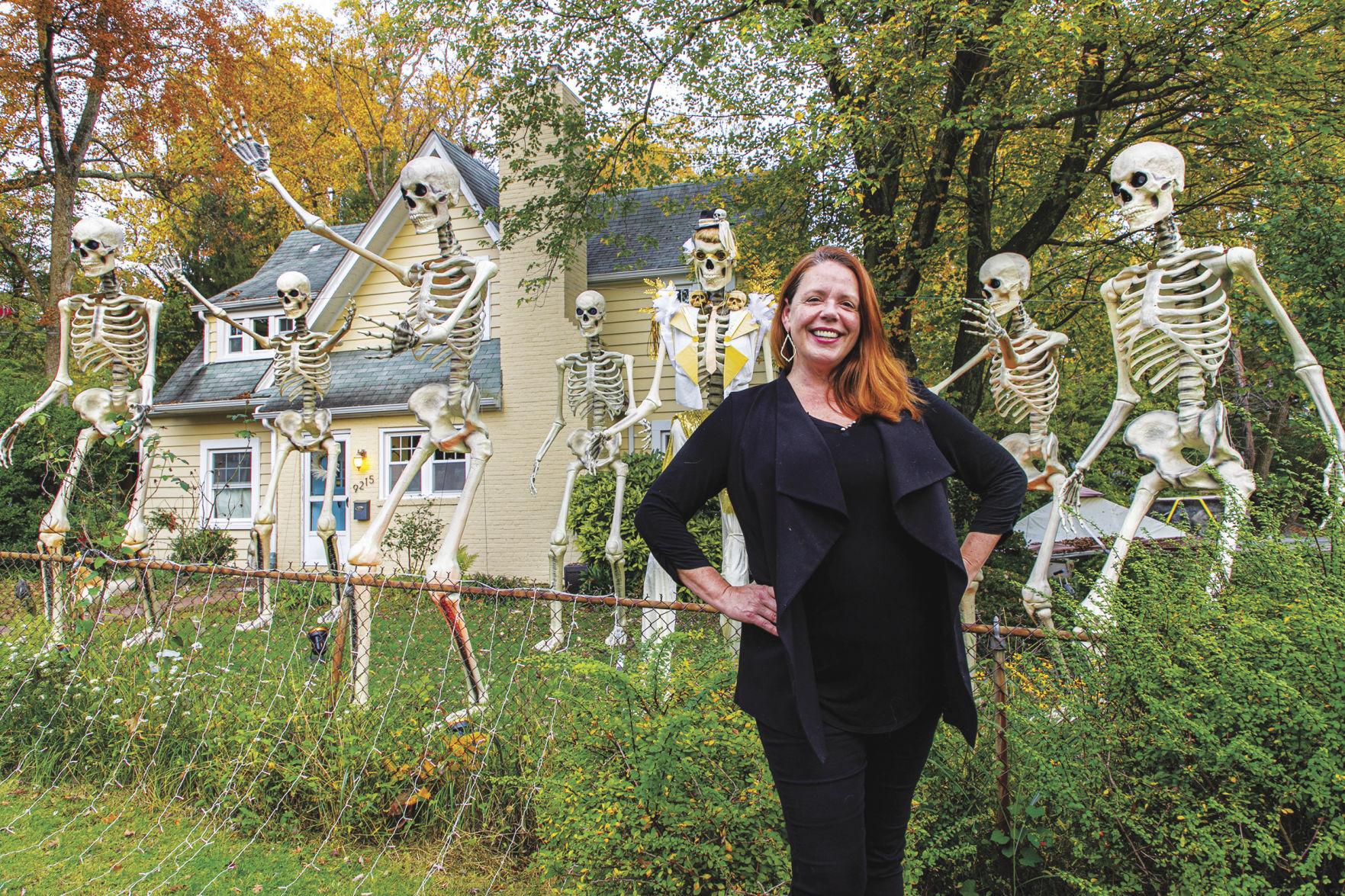 Donna Kerr displays seven of her 10 skeletons, including "Skelton John," in her Maryland yard.

SHAMOKIN — Two city residents were charged Wednesday with selling methamphetamine to a confidential informant in September.

Daniel D. Berger, 31, and Jennifer Lynn Conover, 40, both of 219 S. Market St., Shamokin, are charged by Cpl. Bryan Primerano with felonies of delivering methamphetamine, criminal conspiracy and criminal use of a communication facility.

Primerano reported Berger and Conover are accused of selling one gram of methamphetamine for $100 to an informant Sept. 16 at Water and Second streets.

Berger and Conover were arraigned on the charges at 2:30 p.m. Tuesday and committed to Northumberland County Jail in lieu of $20,000 cash bail each.

Berger and Corey James Feese, 30, also of 219 S. Market St., were charged by Patrolman James Filko and Primerano, respectively, with possessing drug paraphernalia relating to an incident at 1:53 p.m. Tuesday at their residence.

Berger and Conover were taken into custody at their residence by Shamokin police and Northumberland County probation officers.

Primerano said the investigation was conducted in conjunction with the Northumberland-Montour County Drug Task Force.

HARRISBURG — The Commonwealth Court of Pennsylvania this week found that Home Rule municipalities are not subject to a provision of The Local Tax Enabling Act that sets an aggregate limit on taxation.

The Local Tax Enabling Act, also known as Act 511, contains a limitation on the local taxes certain municipalities may impose. Specifically, the various forms of local taxes levied by a municipality subject to Act 511 may not exceed the total value of all real estate in the municipality multiplied by 12 mils (.012).

The City of Scranton was successful in their appeal from an order of the Court of Common Pleas of Lackawanna County, which had ordered the city to escrow about $50 million in local taxes to repay taxes collected from taxpayers in excess of the aggregate limit.

Taxpayers contended that Scranton exceeded the cap imposed by Act 511, and had asked the trial court to order Scranton to reduce its tax rates to comply with Act 511 and to deposit all excess taxes collected into a separate account for expenditure in the following fiscal year.

In its appeal, Scranton asserted that, as a Home Rule municipality, it is not subject to the limitations of Act 511. The city further claimed that Act 511 is not a statute applicable in every part of the commonwealth, and therefore exempt once it entered Home Rule.

The Commonwealth Court found that the Home Rule Law provides that the subjects of taxation by a Home Rule municipality may be limited by statute, but the rates of taxation may not.

Scranton was formerly a Second Class A city and subject to Act 511, but once it elected Home Rule status in 1992 it retained all powers conferred upon it by Act 511, but was no longer subject to its limitations, the court reasoned.

Noting that court decisions have not been fully consistent in determining which statutes are applicable in every part of the state, the Commonwealth Court explained that Act 511 applies to Second Class A cities – Scranton’s former status – but does not apply to Home Rule municipalities.

In addition, Scranton pointed out that it’s a distressed city pursuant to the Municipalities Financial Recovery Act (Act 47) and is statutorily authorized to impose additional taxes in order to support its plan for financial recovery. The city insisted that applying Act 511’s aggregate tax limit would defeat the purpose of Act 47 and prevent financial recovery.

According to the Pennsylvania Economy League, Scranton was confronted with a poor economy and declining population in the 1980s. The city responded by increasing taxes significantly, which produced a non-competitive tax structure. The overall result was a “self-defeating and further depressed economy.”

Although Scranton is not subject to Act 511, the Commonwealth Court addressed the matter and found that the aggregate tax limitation is irrelevant to the city’s distressed status or its recovery efforts.