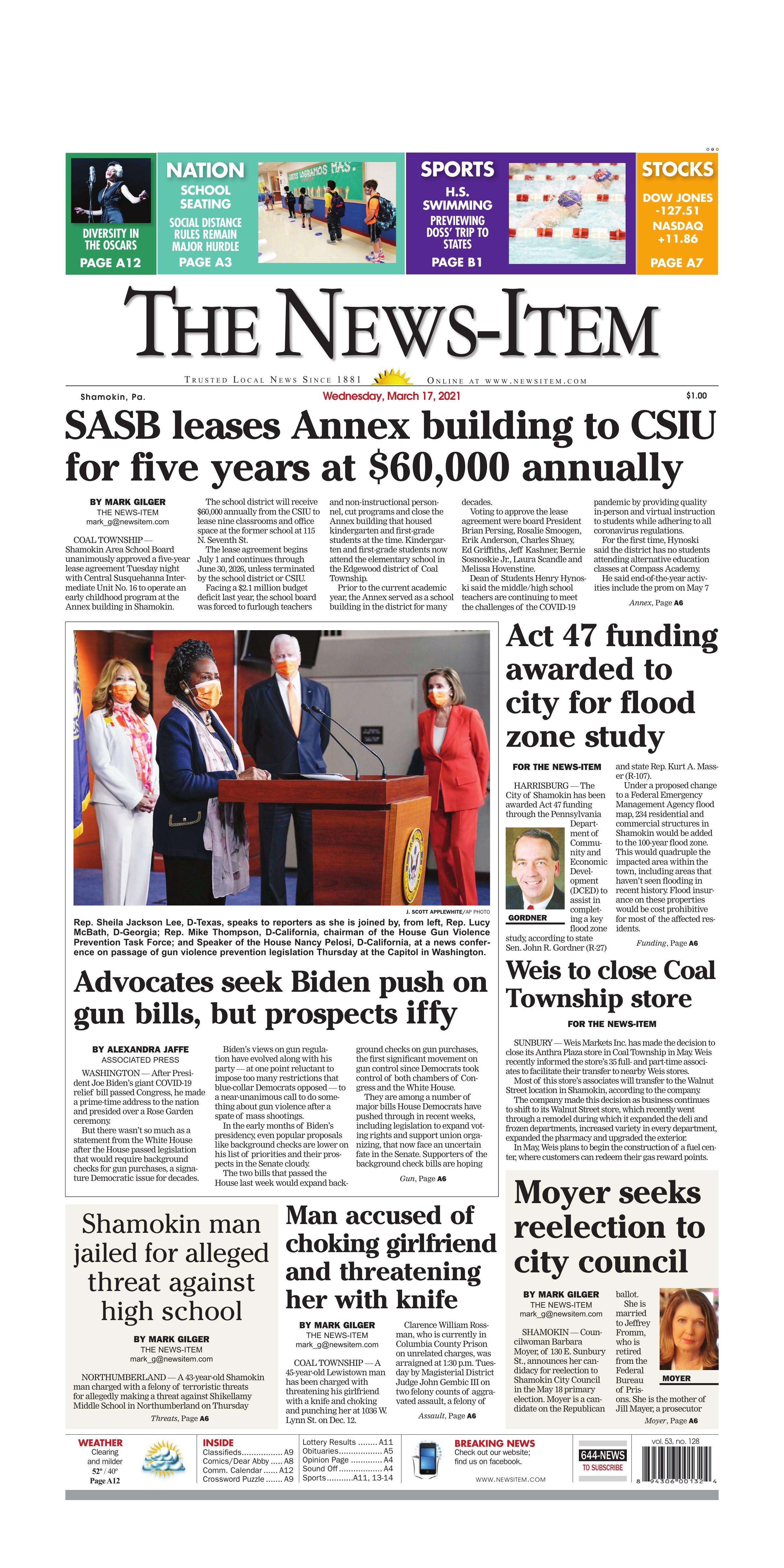 The school district will receive $60,000 annually from the CSIU to lease nine classrooms and office space at the former school at 115 N. Seventh St.

The lease agreement begins July 1 and continues through June 30, 2026, unless terminated by the school district or CSIU.

Prior to the current academic year, the Annex served as a school building in the district for many decades.

Dean of Students Henry Hynoski said the middle/high school teachers are continuing to meet the challenges of the COVID-19 pandemic by providing quality in-person and virtual instruction to students while adhering to all coronavirus regulations.

For the first time, Hynoski said the district has no students attending alternative education classes at Compass Academy.

Venna thanked the CSIU for helping facilitate the vaccinations.

Kashner was reappointed to serve as the district representative on the CSIU Board of Directors for a three-year term, beginning July 1.

The board approved the installation of a water line by Aqua Pennsylvania Inc. at Northumberland County Career and Technology Center.

Doreen Commerford was appointed as a long-term substitute special education teacher for the 2020-2021 school term, retroactive to Dec. 7, at a salary of $105 per day for the first 60 days plus insurance benefits. Beginning the 61st day of employment, Commerford will receive a per diem average of the starting salary on the professional salary schedule with a master’s degree.

Todd Tobias was recalled to the position of utility worker for 260 days per year at a rate of $21.50 per hour plus benefits, effective April 6.

The board adjusted the salary of head baseball coach Jason Mowery from $2,650 to $3,250 due to an error in calculation.

Dante Picarelli was appointed as a volunteer with the varsity boys and girls track and field teams for the 2020-21 school year.

At the end of the meeting, Persing said he will make a $500 donation to the Purple Perk, a student-operated cafe at the middle/high school.

To show their appreciation for Persing’s support of the cafe over the years, students made a banner in Persing’s honor that hung from a table in front of his seat in the board room Tuesday night.

COAL TOWNSHIP — A 45-year-old Lewistown man has been charged with threatening his girlfriend with a knife and choking and punching her at 1036 W. Lynn St. on Dec. 12.

Clarence William Rossman, who is currently in Columbia County Prison on unrelated charges, was arraigned at 1:30 p.m. Tuesday by Magisterial District Judge John Gembic III on two felony counts of aggravated assault, a felony of strangulation and misdemeanors of simple assault, recklessly endangering another person, possessing an instrument of crime and possessing an offensive weapon.

The charges were filed by Coal Township Patrolman Christopher Lapotsky.

Police said Rossman, who was recommitted to jail by Gembic in lieu of $40,000 cash bail, allegedly held a knife to the throat of his girlfriend, Heather Bender, and threatened to kill her at her residence at 12:24 p.m. Rossman also is accused of choking Bender, punching her and hitting her all over her body, causing multiple injuries that required medical treatment at Geisinger Medical Center in Danville.

NORTHUMBERLAND — A 43-year-old Shamokin man charged with a felony of terroristic threats for allegedly making a threat against Shikellamy Middle School in Northumberland on Thursday morning is in Northumberland County Jail today.

The threat prompted a lockdown of every building in the school district Thursday.

Jeremy Richard Good, of 140 S. Carbon St., who is accused of making the threat during a phone call to the office of Shikellamy High School in Sunbury, was arraigned on the felony offense Tuesday morning by Magisterial District Judge Michael Toomey and committed to jail in lieu of $100,000 cash bail.

Good, who was being sought by authorities since Thursday, was taken into custody Tuesday morning by Northumberland and Sunbury police at the Sunbury office of defense attorney James Best.

The threat allegedly made by Good was immediately brought to the attention of Sunbury and Northumberland police.

According to a criminal complaint filed by Northumberland Patrolman Edward Cope, Good used a Tracfone — a rechargeable mobile phone — purchased March 1 from Walmart Supercenter in Coal Township to call the high school and make claims against the district.

Police said school officials advised Good they couldn’t help him, which prompted Good to say he was going to have someone go after them and kill them.

The school district emailed an audio recording of the phone call to police, who tracked the call to the Tracfone.

Shikellamy School District officials ordered students and teachers to remain in the classrooms they were currently in for the remainder of the school day. Parents were able to pick up their children at dismissal time at 2:45 p.m. 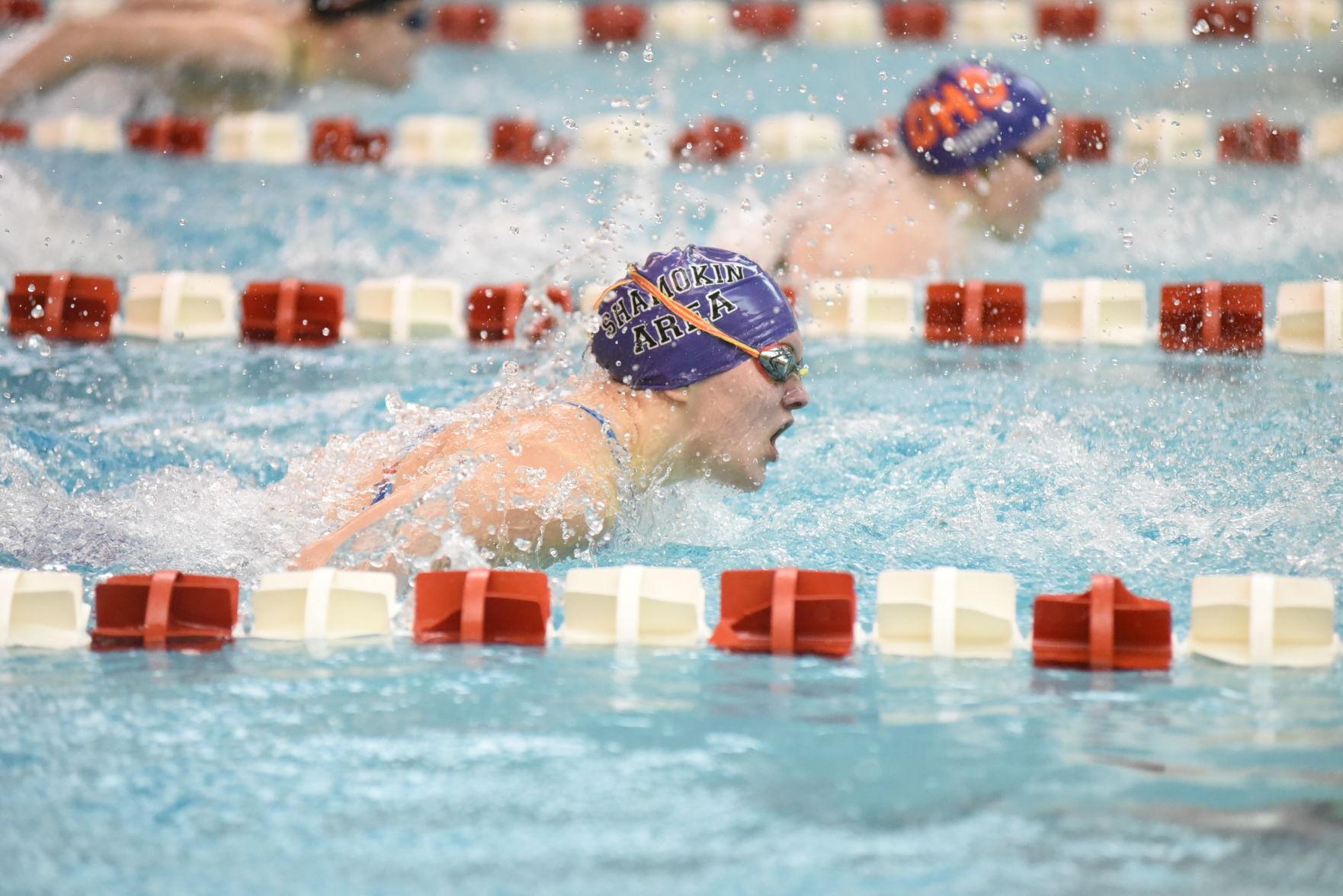 HARRISBURG — The City of Shamokin has been awarded Act 47 funding through the Pennsylvania Department of Community and Economic Development (DCED) to assist in completing a key flood zone study, according to state Sen. John R. Gordner (R-27) and state Rep. Kurt A. Masser (R-107).

Under a proposed change to a Federal Emergency Management Agency flood map, 234 residential and commercial structures in Shamokin would be added to the 100-year flood zone. This would quadruple the impacted area within the town, including areas that haven’t seen flooding in recent history. Flood insurance on these properties would be cost prohibitive for most of the affected residents.

Through Act 47, the City will receive $130,000 in state grant money to fund a hydrologic and hydraulic study to determine if the proposed changes to the flood zone are accurate.

“I want to thank Gov.Tom Wolf, DCED and, particularly, Deputy Secretary Rick Vilello, for ensuring these crucial funds make it to the City of Shamokin,” said Gordner. “This should help to limit the impact of the flood zone changes only to those properties that truly require it, which will allow us to continue seeking investment in the City of Shamokin.”

“The proposed federal changes will cripple downtown Shamokin and its revitalization efforts as it seeks to pull itself out of Act 47 status,” said Masser. “I am confident that this study will be beneficial for city planners and the residents of Shamokin.”

SUNBURY — Weis Markets Inc. has made the decision to close its Anthra Plaza store in Coal Township in May. Weis recently informed the store’s 35 full- and part-time associates to facilitate their transfer to nearby Weis stores.

Most of this store’s associates will transfer to the Walnut Street location in Shamokin, according to the company.

The company made this decision as business continues to shift to its Walnut Street store, which recently went through a remodel during which it expanded the deli and frozen departments, increased variety in every department, expanded the pharmacy and upgraded the exterior.

In May, Weis plans to begin the construction of a fuel center, where customers can redeem their gas reward points.

SHAMOKIN — Councilwoman Barbara Moyer, of 130 E. Sunbury St., announces her candidacy for reelection to Shamokin City Council in the May 18 primary election. Moyer is a candidate on the Republican ballot.

She is married to Jeffrey Fromm, who is retired from the Federal Bureau of Prisons. She is the mother of Jill Mayer, a prosecutor in Camden County, New Jersey, and has three grandchildren. Her son-in-law is attorney Joel Mayer.

Moyer graduated from Coal Township High School and Bloomsburg University, after which she pursued a career in education as a language arts and communication teacher at Shamokin Area High School.

While at Shamokin Area, she was involved as a class adviser, adviser to annual commencement exercises, and many clubs and activities. She was an assistant director for the high school musicals and served several years as publicity director.

She also co-wrote and taught a program addressing students’ reading and language arts challenges. Moyer taught reading and literacy to several adults as a volunteer.

Following her retirement from Shamokin Area after 34 years, Moyer was an instructor of the GED program for Central Susquehanna Intermediate Unit.

Recently, she served on the board of SEDA-Council of Governments, which serves 11 counties while working toward furthering economic development.

Volunteerism has always been a part of Moyer’s life and she has served the community with Manna for the Many, a local food distribution pantry. She also has sponsored a scholarship for 29 years for a Shamokin Area senior who has achieved the highest combined average in English and social studies.

Along with her husband, former Mayor William Milbrand and other volunteers, she helped with many cleanups at Shamokin Cemetery and downtown Shamokin.

As a lifelong resident of the Shamokin-Coal Township area, Moyer is very aware of the challenges that face the city.

When first elected to council, the most pressing order of business was to bring about stability to the city’s finances, community and city government.

Her first directorship on council was with parks and public buildings. That is when she became aware that citizens needed much more than a balanced budget. People craved activities and events, and looked for a commitment to keeping the swimming pool and the public library open.

Moyer pointed out that Music in the Park, an annual musical series held at Claude Kehler Community Park, developed on her watch and has been a great success.

“People want to feel good about their community and city councils have worked hard to strike a balance between fiscal responsibility and quality of life,” Moyer said. “We have struggled to address the problems that we and most cities face, but with an eye toward offering positive events for our citizens.

Currently, Moyer serves as finance director for the city. Moyer said she has relied on a talented team comprised of the administrative accountant, city manager and treasurer to bring expertise to the budget and day-to-day operations of the city.

“Volunteerism in Shamokin has skyrocketed,” she said. “New restaurants and businesses have emerged and business people are investing in our city. Shamokin is on a positive upswing thanks to those with vision and dedication. Organizations like Northumberland County Council for the Arts, GoShamokin and SABER are making a true difference in Shamokin. State officials have lent support to our city as they have recognized Shamokin’s potential for growth. It is exciting to be an integral part of Shamokin’s revitalization.”

She said on May 18, citizens will have an opportunity to vote to establish a commission to study various types of government for the city.

“I fully support electing this commission so that our own citizens can have a voice in selecting the form of government most suited to Shamokin in 2021 and going forward. Failing that, ACT 47 has offered the option of a $4 million loan which would directly impact real estate taxes and the security of our city. As a council person, I reject this as being ‘no real option’ for our citizens, and will not support this loan.”

She concluded, “When I was first elected to council, I had a very steep learning curve in trying to manage the city and help pull it from its dire circumstances. My love for our city is deeply rooted in family, ancestry, work and the sheer enjoyment of the Shamokin way of life. I hope we can all work together to keep moving forward and I humbly ask for your vote in the upcoming primary. Let us turn community pride into progress.”