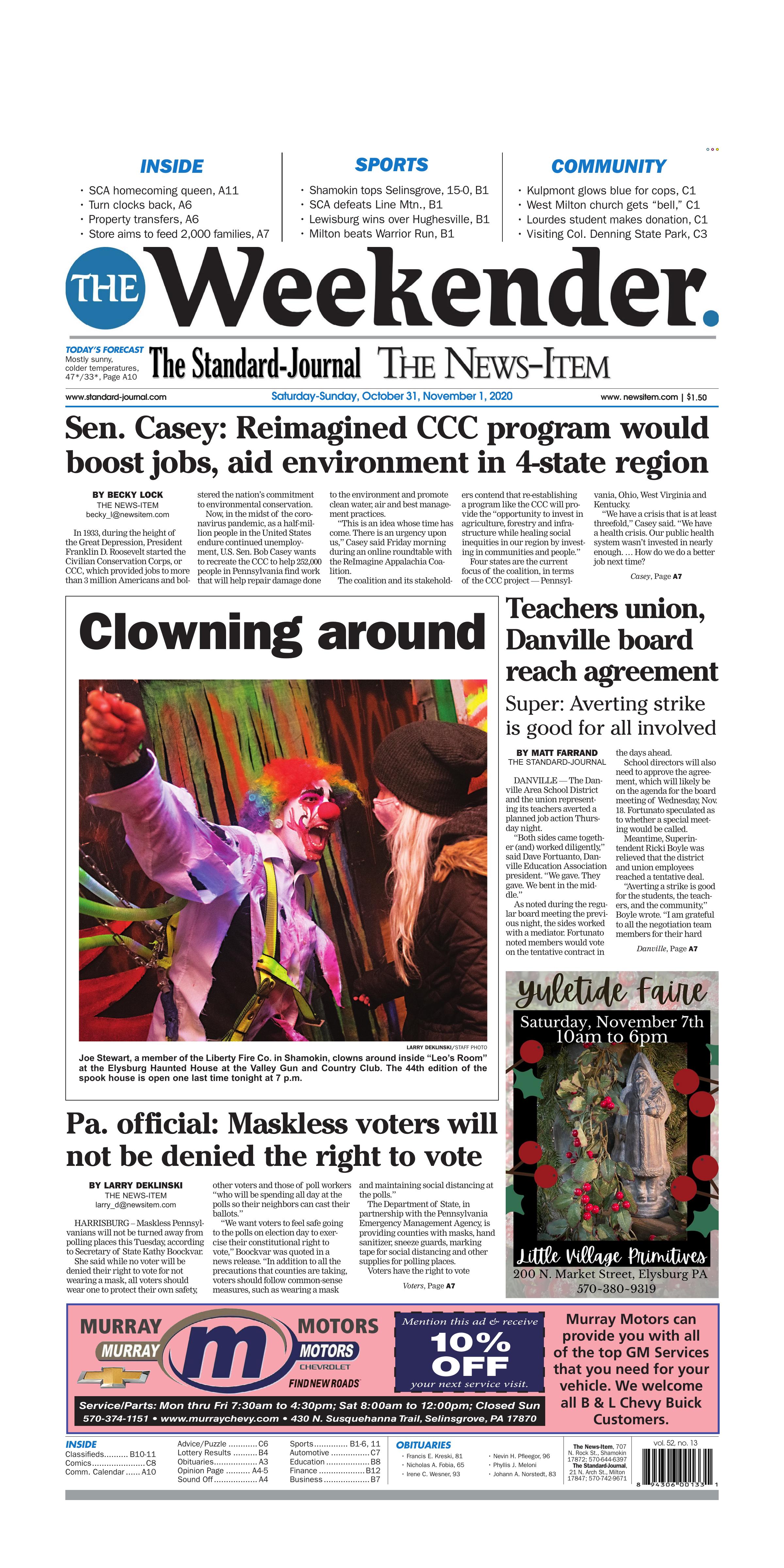 In 1933, during the height of the Great Depression, President Franklin D. Roosevelt started the Civilian Conservation Corps, or CCC, which provided jobs to more than 3 million Americans and bolstered the nation’s commitment to environmental conservation.

Now, in the midst of the coronavirus pandemic, as a half-million people in the United States endure continued unemployment, U.S. Sen. Bob Casey wants to recreate the CCC to help 252,000 people in Pennsylvania find work that will help repair damage done to the environment and promote clean water, air and best management practices.

“This is an idea whose time has come. There is an urgency upon us,” Casey said Friday morning during an online roundtable with the ReImagine Appalachia Coalition.

The coalition and its stakeholders contend that re-establishing a program like the CCC will provide the “opportunity to invest in agriculture, forestry and infrastructure while healing social inequities in our region by investing in communities and people.”

Four states are the current focus of the coalition, in terms of the CCC project — Pennsylvania, Ohio, West Virginia and Kentucky.

“We have a crisis that is at least threefold,” Casey said. “We have a health crisis. Our public health system wasn’t invested in nearly enough. … How do we do a better job next time?

“Obviously, we have a jobs crisis. In September, there still were about a half a million people out of work. Pennsylvania is just a little above 8 (percent unemployment) now,” he added. “We had double-digit unemployment for most of the last six months.”

And, there’s a climate crisis, Casey noted, that cannot be set aside.

“We have to deal with all three simultaneously – and urgently,” he said.

The pandemic and governments’ reactions to it slammed the door on working-class citizens and small businesses.

“Our four states have 1.1 million fewer jobs as of September,” said Stephen Herzenberg, executive director of the Keystone Research Center. “The CCC alone could create 100,000 jobs in our region. These are jobs that our region needs right now, for work outside that can be performed safely, right now.”

In just Pennsylvania and Ohio, he said, the direct CCC jobs would number more than 70,000.

“(We) absolutely have a desperate need for jobs as well as critical work that needs to be done,” Herzenberg said. “We should be creating these 100,000 jobs as soon as Sen. Casey gets this bill created.”

Casey is eyeing 2021 as the year to develop a “New Deal-style jobs program ... with a new Civilian Conservation Corps.”

“The key would be federally supported but locally directed. You have to have federal dollars to do this ... and I can hear the howls from some in Washington saying, ‘Oh my goodness, you mean you’re going to use federal dollars to hire people?’ And I say, damn right! We have to do it. There’s no way we can wait for some package of incentives to kickstart a full, robust recovery. If anything, we learned some lessons from the Recovery Act of last time. It wasn’t big enough. It had a positive impact over time, but it didn’t have the kind of punch that you need to the economy right away. We need people to have jobs, to have income.”

The “conservation” part of the CCC would mean jobs in the environmental sector.

“It would support jobs in sustainable agriculture, to help our waterways and public lands, our health and resiliency of both rural communities and urban communities,” Casey said.

Bobby Hughes, executive director of the Eastern PA Coalition for Abandoned Mine Reclamation, knows exactly what kinds of jobs the senator means. His nonproft organization needs those types of workers but can’t quite pay them enough to stay onboard.

“I lose people and I can’t blame them for going on,” he said.

Some positions are for hands-on people who can plant riparian corridors and monitor water flow in streams like Shamokin Creek and other technical positions involve work in designing treatment systems or solar projects.

“We don’t give nonprofits million-dollar grants,” Hughes said. “This program could do that. These jobs could be funded. It’s hard to keep very good people.”

The conservation jobs will impact the environment, which will produce a beneficial effect on issues plaguing not just the state and nation but the world, Casey said.

“I think this can be an initiative that can both help workers, create jobs – family-sustaining jobs – but also at the same time, address the climate crisis,” Casey said.

“We need to make sure the American people hear from us on a regular basis about those fundamentals: Climate change is real. It’s caused by human activity. It is a threat to human life. And, we have to do something about it, simple as that.

Casey acknowledged parts of the state such as the coal region and the northern and western counties where natural gas drilling continues.

“In a state like ours, we have a legacy of extraction industries,” he said, then quoted part of a 1971 amendment to the Pennsylvania Constitution that says residents have a right to clean air, pure water and the preservation of the natural, scenic, historic and aesthetic values of the environment.

“We’re all trustees of the land of the commonwealth. We can’t repeat that history.” 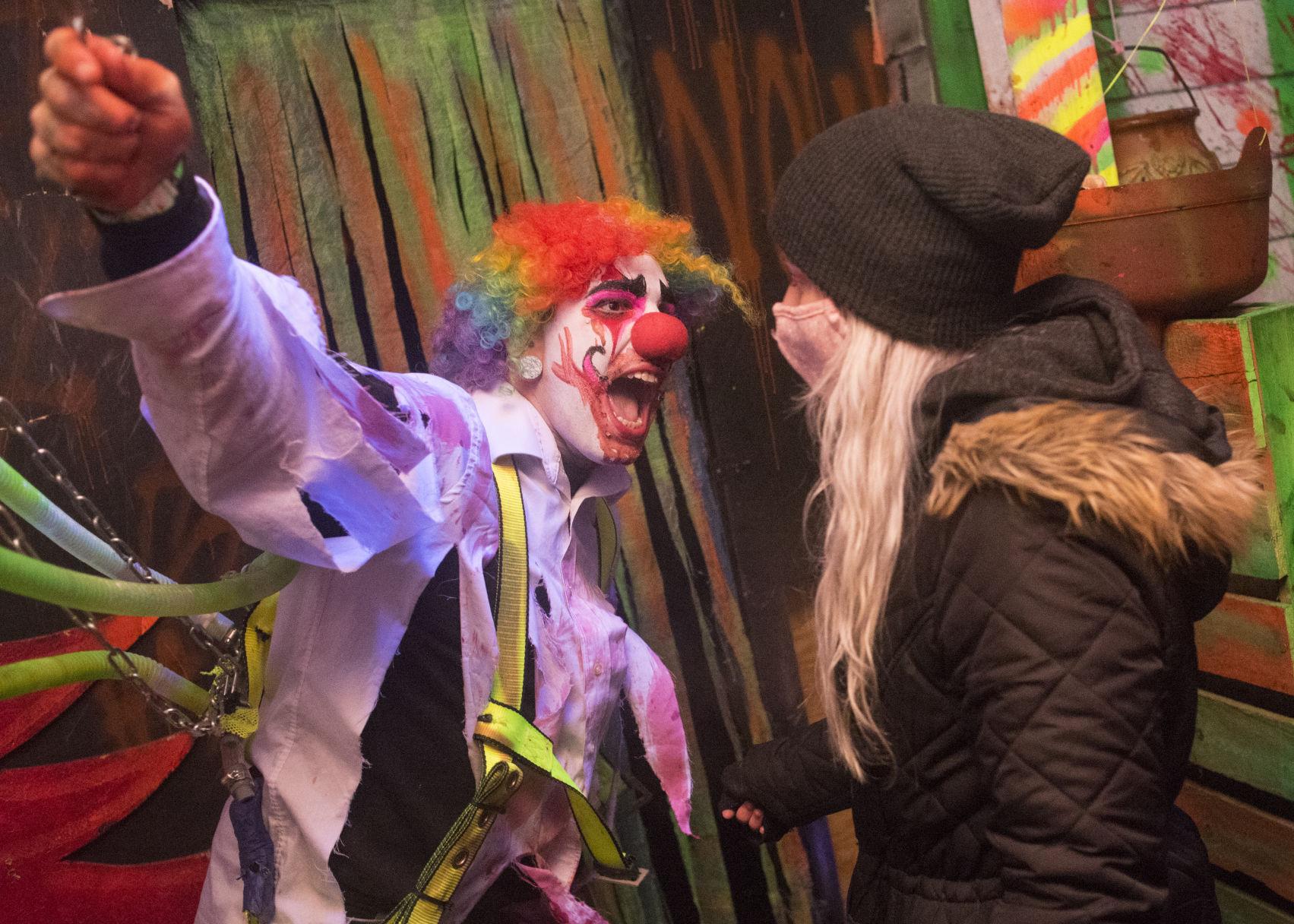 Joe Stewart, a member of the Liberty Fire Co. in Shamokin, clowns around inside “Leo’s Room” at the Elysburg Haunted House at the Valley Gun and Country Club. The 44th edition of the spook house is open one last time tonight at 7 p.m.

HARRISBURG – Maskless Pennsylvanians will not be turned away from polling places this Tuesday, according to Secretary of State Kathy Boockvar.

She said while no voter will be denied their right to vote for not wearing a mask, all voters should wear one to protect their own safety, other voters and those of poll workers “who will be spending all day at the polls so their neighbors can cast their ballots.”

“We want voters to feel safe going to the polls on election day to exercise their constitutional right to vote,” Boockvar was quoted in a news release. “In addition to all the precautions that counties are taking, voters should follow common-sense measures, such as wearing a mask and maintaining social distancing at the polls.”

The Department of State, in partnership with the Pennsylvania Emergency Management Agency, is providing counties with masks, hand sanitizer, sneeze guards, marking tape for social distancing and other supplies for polling places.

Voters have the right to vote without being subjected to intimidation, harassment or discriminatory conduct. A voter who experiences intimidation should report it to their county board of elections and the district attorney’s office. Voters can also call the Department of State at 1-877-VOTESPA (1-877-868-3772) or the U.S. Department of Justice’s Voting Section at 1-800-253-3931.

Polls will be open 7 a.m. to 8 p.m. on election day. Voters can find their polling place and more information on voting at the polls on the department’s voting website votesPA.com.

“Both sides came together (and) worked diligently,” said Dave Fortuanto, Danville Education Association president. “We gave. They gave. We bent in the middle.”

As noted during the regular board meeting the previous night, the sides worked with a mediator. Fortunato noted members would vote on the tentative contract in the days ahead.

School directors will also need to approve the agreement, which will likely be on the agenda for the board meeting of Wednesday, Nov. 18. Fortunato speculated as to whether a special meeting would be called.

Meantime, Superintendent Ricki Boyle was relieved that the district and union employees reached a tentative deal.

“Averting a strike is good for the students, the teachers, and the community,” Boyle wrote. “I am grateful to all the negotiation team members for their hard work and willingness to do what is best for the students.

The negotiation and agreement followed a board meeting where it was apparent that health insurance deductibles were at issue for union members covered. Citizen comment questioned the wisdom of striking amid current economic conditions.

Other comments from viewers observed that most working people with health insurance faced similar or greater deductible amounts.