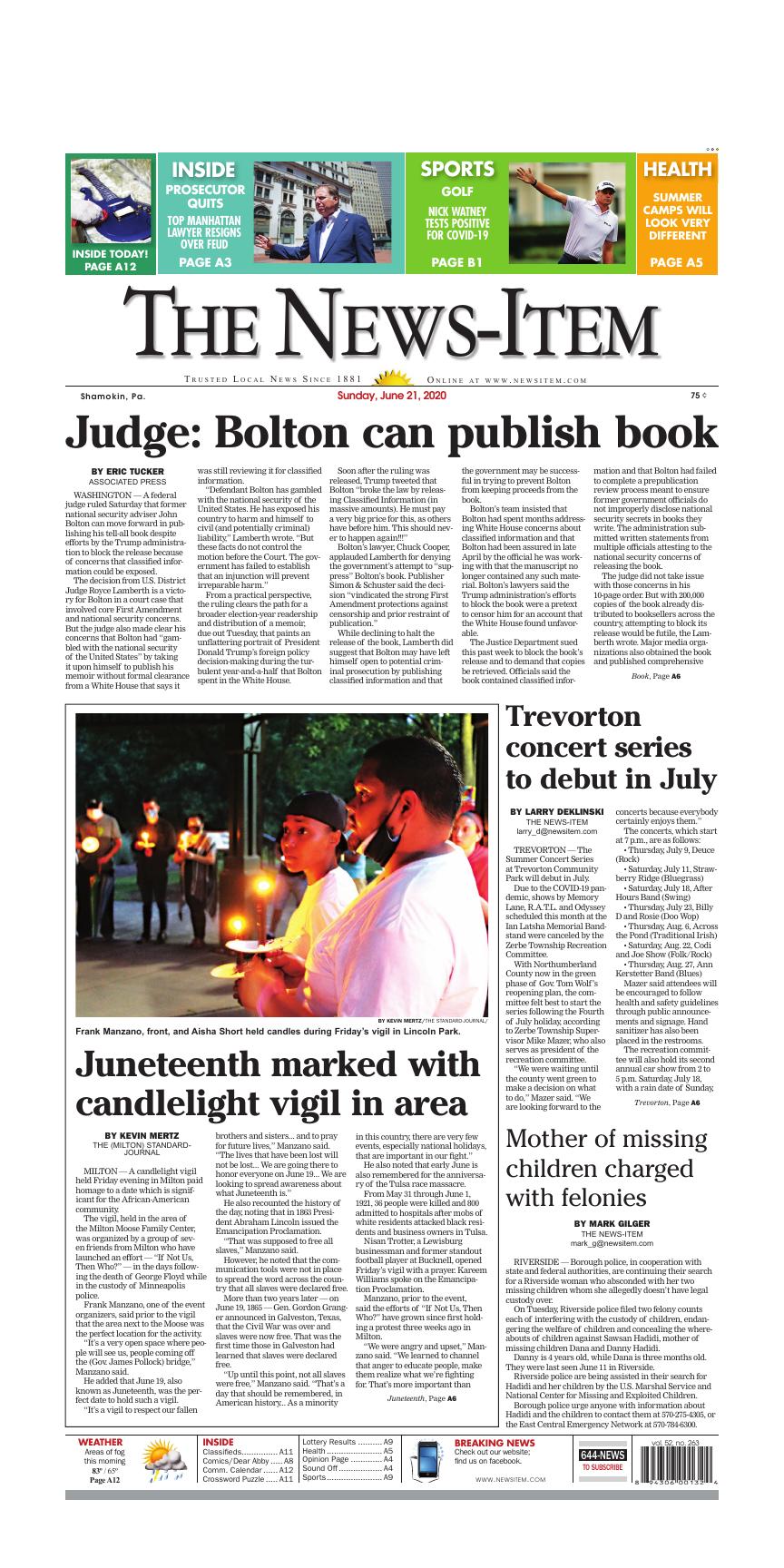 MILTON — A candlelight vigil held Friday evening in Milton paid homage to a date which is significant for the African-American community.

The vigil, held in the area of the Milton Moose Family Center, was organized by a group of seven friends from Milton who have launched an effort — “If Not Us, Then Who?” — in the days following the death of George Floyd while in the custody of Minneapolis police.

Frank Manzano, one of the event organizers, said prior to the vigil that the area next to the Moose was the perfect location for the activity.

“It’s a very open space where people will see us, people coming off the (Gov. James Pollock) bridge,” Manzano said.

He added that June 19, also known as Juneteenth, was the perfect date to hold such a vigil.

“It’s a vigil to respect our fallen brothers and sisters... and to pray for future lives,” Manzano said. “The lives that have been lost will not be lost... We are going there to honor everyone on June 19... We are looking to spread awareness about what Juneteenth is.”

He also recounted the history of the day, noting that in 1863 President Abraham Lincoln issued the Emancipation Proclamation.

“That was supposed to free all slaves,” Manzano said.

However, he noted that the communication tools were not in place to spread the word across the country that all slaves were declared free.

More than two years later — on June 19, 1865 — Gen. Gordon Granger announced in Galveston, Texas, that the Civil War was over and slaves were now free. That was the first time those in Galveston had learned that slaves were declared free.

“Up until this point, not all slaves were free,” Manzano said. “That’s a day that should be remembered, in American history... As a minority in this country, there are very few events, especially national holidays, that are important in our fight.”

He also noted that early June is also remembered for the anniversary of the Tulsa race massacre.

From May 31 through June 1, 1921, 36 people were killed and 800 admitted to hospitals after mobs of white residents attacked black residents and business owners in Tulsa.

Manzano, prior to the event, said the efforts of “If Not Us, Then Who?” have grown since first holding a protest three weeks ago in Milton.

“We were angry and upset,” Manzano said. “We learned to channel that anger to educate people, make them realize what we’re fighting for. That’s more important than screaming and yelling.

“When you educate someone, they can understand where you’re coming from. If they’re just yelling and yelling, there won’t be a lot of listening.”

“We have to keep this going,” Manzano said. “People are looking to us to make a real change in our community. That’s what we are dedicated to doing.”

Last week in Lewisburg, Manzano estimated 1,100 people turned out for a protest there.

“Man, it is literally the most humbling, amazing, most ridiculous feeling,” he said. “We never expected to cause this much ruckus, in a good way.”

Manzano and Williams both want the community to understand why protests are taking place, both locally and across the country.

“What we’re trying to do is build a future for my children, where we’re all truly equal,” he said. “The way that we interact with each other, I want everyone to be treated with the same kind of respect, the equality the fair skin has seen.”

He said the effort is also about bringing people together.

“We are trying to get people to open up their hearts,” Williams said. “You don’t have to agree with everything we stand for. Open your hearts and your minds.”

Manzano also said that while protestors speak about defunding police, that does not mean eliminating police.

“We are trying to redistribute where the money’s going,” he said. “We want to invest in our communities, invest in our people... We are still looking for more funding for our schools, our hospitals, our services and our infrastructure.”

Williams said each of the founders of the “If Not Us, Then Who?” movement have had some form of racism directed at them while growing up in Central Pennsylvania.

“We take this very personal,” he said. “This is why we show our emotion when we speak.”

Williams doesn’t want any minority to end up in the same situation which Floyd found himself in.

“We don’t want it to be us next,” he said. “We know it can happen. It’s any person of color, at the wrong place at the wrong time.”

In addition to Manzano, he listed the founders of “If Not Us, Then Who?” as Tony Manzano, Raf Rodriguez, Xavi Rodriguez, Kareem Williams, Keayon Williams and Brandon Rogers.

The group will be participating in a protest scheduled for 6:30 this evening in Selinsgrove.

TREVORTON — The Summer Concert Series at Trevorton Community Park will debut in July.

Due to the COVID-19 pandemic, shows by Memory Lane, R.A.T.L. and Odyssey scheduled this month at the Ian Latsha Memorial Bandstand were canceled by the Zerbe Township Recreation Committee.

With Northumberland County now in the green phase of Gov. Tom Wolf’s reopening plan, the committee felt best to start the series following the Fourth of July holiday, according to Zerbe Township Supervisor Mike Mazer, who also serves as president of the recreation committee.

“We were waiting until the county went green to make a decision on what to do,” Mazer said. “We are looking forward to the concerts because everybody certainly enjoys them.”

The concerts, which start at 7 p.m., are as follows:

Mazer said attendees will be encouraged to follow health and safety guidelines through public announcements and signage. Hand sanitizer has also been placed in the restrooms.

The recreation committee will also hold its second annual car show from 2 to 5 p.m. Saturday, July 18, with a rain date of Sunday, July 19. The event will also feature music by R.A.T.L..

Mazer said general use of the park is now permitted. People can access the playground, pavilions, bathrooms, tennis court, and volleyball and pickleball areas.

The recreation committee’s gift card bingo originally set for April is being rescheduled. The loss of funds from the organization’s largest fundraiser has stunted further development of the park, Mazer noted.

On a positive note, Mazer said a frisbee golf course consisting of four stations is nearing completion thanks to “generous” donations and continued community support.

RIVERSIDE — Borough police, in cooperation with state and federal authorities, are continuing their search for a Riverside woman who absconded with her two missing children whom she allegedly doesn’t have legal custody over.

On Tuesday, Riverside police filed two felony counts each of interfering with the custody of children, endangering the welfare of children and concealing the whereabouts of children against Sawsan Hadidi, mother of missing children Dana and Danny Hadidi.

Danny is 4 years old, while Dana is three months old. They were last seen June 11 in Riverside.

Riverside police are being assisted in their search for Hadidi and her children by the U.S. Marshal Service and National Center for Missing and Exploited Children. 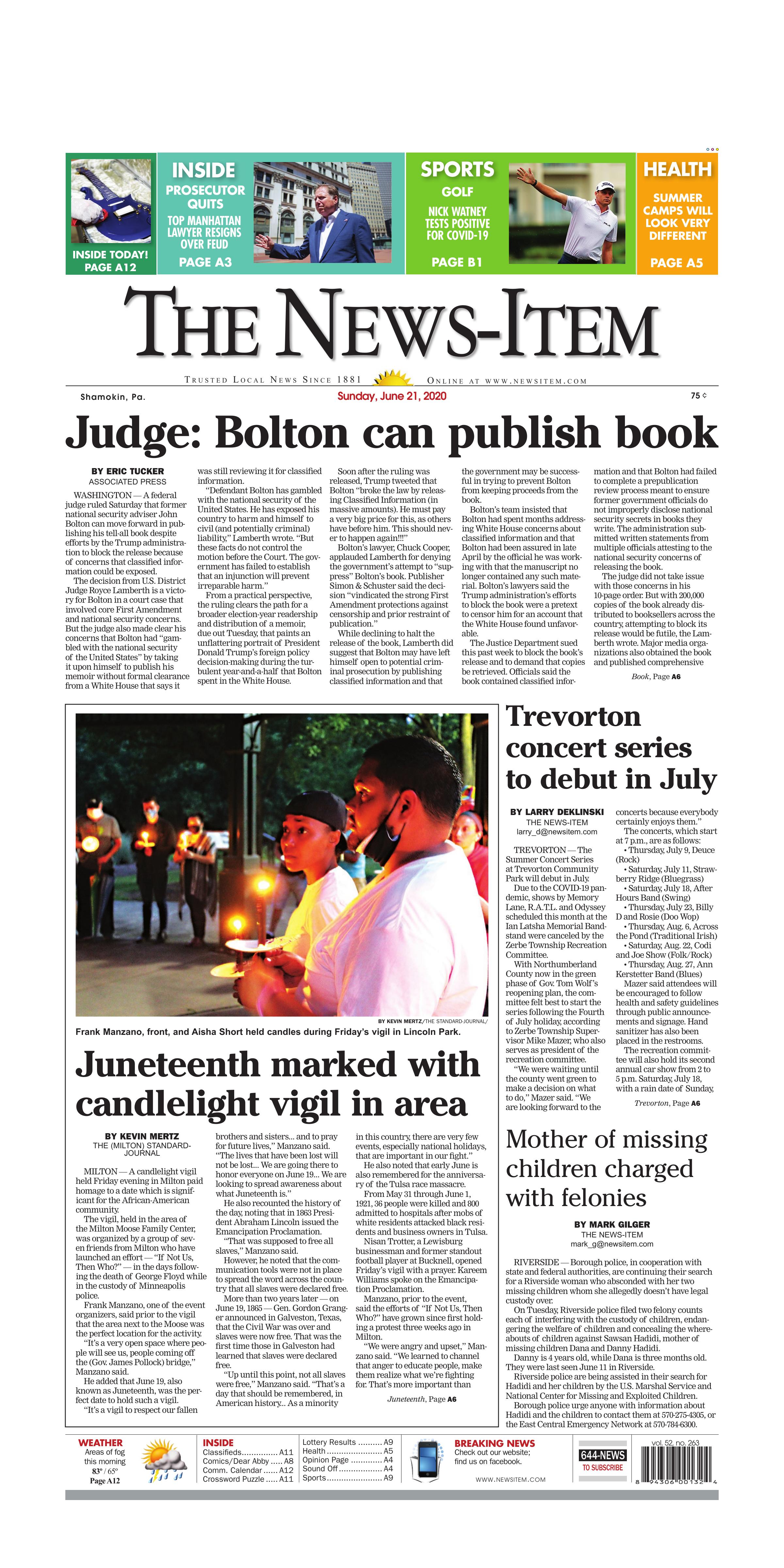