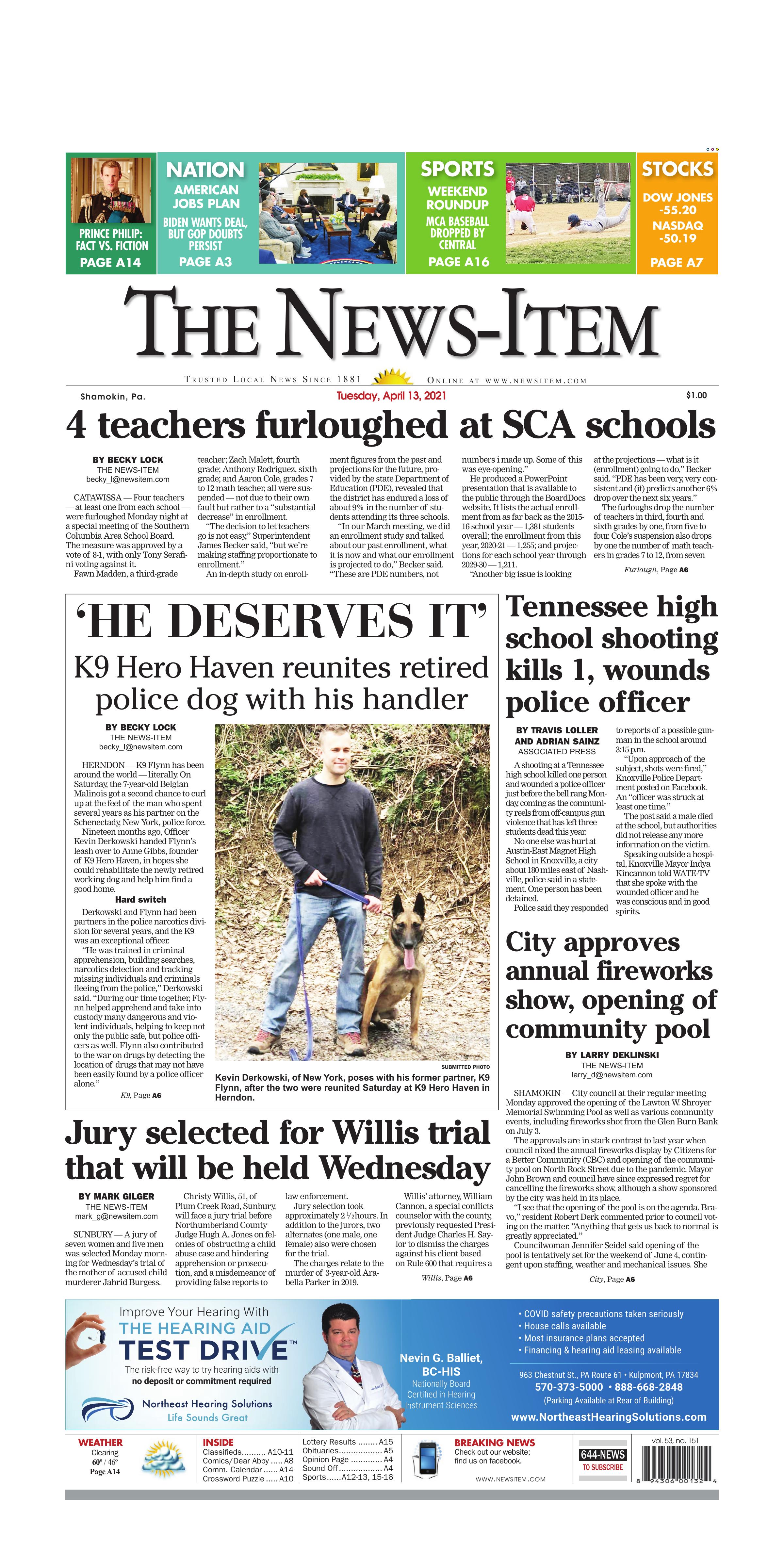 President Joe Biden and Vice President Kamala Harris meet with lawmakers to discuss the American Jobs Plan in the Oval Office of the White House Monday in Washington.

CATAWISSA — Four teachers — at least one from each school — were furloughed Monday night at a special meeting of the Southern Columbia Area School Board. The measure was approved by a vote of 8-1, with only Tony Serafini voting against it.

Fawn Madden, a third-grade teacher; Zach Malett, fourth grade; Anthony Rodriguez, sixth grade; and Aaron Cole, grades 7 to 12 math teacher, all were suspended — not due to their own fault but rather to a “substantial decrease” in enrollment.

“The decision to let teachers go is not easy,” Superintendent James Becker said, “but we’re making staffing proportionate to enrollment.”

An in-depth study on enrollment figures from the past and projections for the future, provided by the state Department of Education (PDE), revealed that the district has endured a loss of about 9% in the number of students attending its three schools.

“In our March meeting, we did an enrollment study and talked about our past enrollment, what it is now and what our enrollment is projected to do,” Becker said. “These are PDE numbers, not numbers i made up. Some of this was eye-opening.”

“Another big issue is looking at the projections — what is it (enrollment) going to do,” Becker said. “PDE has been very, very consistent and (it) predicts another 6% drop over the next six years.”

“We don’t have seven teachers in any other discipline,” Becker noted.

The furloughs will be effective at the end of this school year.

The superintendent indicated that current enrollments for second, third and fifth grades are about 87 students each, which equals about 22 students per class for the 2021-22 school year.

“Sixteen kids to 22 still is a legitimate class size for any grade level,” he said, adding that “27 would be a threshold number for me.”

The board questioned Becker as to what sort of leeway they are allowed to have regarding furloughing specific teachers. The answer, he said, is none.

“We don’t get to pick and choose. The board has no control over the decisions or the names (of teachers to be furloughed),” Becker said. “That’s a school code.”

Instead, furloughs are based on seniority and teacher evaluations. In this case, evaluations were not an issue.

“Certification comes into play, too,” he added. “Depending on what their certification is ... (a teacher) could bump another person with less seniority.”

Following the board’s discussion on the matter, the meeting was paused for nearly a half hour as members continued in executive session. Upon their return, they heard from about 14 members of the public who aired their questions and concerns.

“It’s very frustrating that, in a year when we’re all hanging on by a thread, the thanks they get is, ‘Well, you’re going to have to find another job now,’” district art teacher Tia Brown, of Roaring Creek Township, said. “We have tried our very best ...”

The timing of the announcement was frustrating to others as well, particularly given reports that enrollment of college students seeking teaching degrees also is decreasing. In addition, residents said that changes made in the past year due to COVID-19 already have challenged teachers and students.

“Please vote no,” Ralpho Township resident Dan Hower told the board. “Our students have suffered enough.”

Still others questioned whether the move was primarily an attempt to save money.

“Is a zero budget really worth it,” Katlyn Snyder, of Cleveland Township, asked. “I’m incredibly upset. It will only set the students back further.”

Becker reinforced the district’s stance that the furloughs are not a result of needing to save money.

“We never mentioned budgetary issues. It’s all based on enrollment,” he said.

“I wish we weren’t here,” Becker added. “I think things could have been done in the recent past to keep enrollment, and teachers, in check.”

Looking ahead, though, he said, “This enrollment study will be something we do ... an ongoing process. I think this is a living document that we continue to evaluate.”

Such attention to changing trends over the years could have lessened the loss that students and staff will experience due to furloughing four teachers at one time, Becker noted. “I think some of this could have been avoided.”

“I don’t doubt the need to make adjustments and modifications over time,” he said, “however, I do question whether or not this is the most appropriate time to make those changes to the program. It’s been a year that we’ve asked people to go above and beyond. I see people rising to the occasion. I see people learning new skills. I see people coming together in all ways that they’ve never done before. And because I think we had a really good year, given the circumstances, I would have a very difficult time supporting this resolution at this time. ... The cost outweighs the reward.”

SUNBURY — A jury of seven women and five men was selected Monday morning for Wednesday’s trial of the mother of accused child murderer Jahrid Burgess.

Christy Willis, 51, of Plum Creek Road, Sunbury, will face a jury trial before Northumberland County Judge Hugh A. Jones on felonies of obstructing a child abuse case and hindering apprehension or prosecution, and a misdemeanor of providing false reports to law enforcement.

Jury selection took approximately 2 1/2 hours. In addition to the jurors, two alternates (one male, one female) also were chosen for the trial.

The charges relate to the murder of 3-year-old Arabella Parker in 2019.

Willis’ attorney, William Cannon, a special conflicts counselor with the county, previously requested President Judge Charles H. Saylor to dismiss the charges against his client based on Rule 600 that requires a defendant to be brought to trial within a year of being charged.

Saylor denied the motion because of a judicial emergency declaration he initially issued March 18, 2020, and later extended that prohibits jury trials from being held until March 15, 2021, due to the coronavirus pandemic.

Willis had spent 140 days in jail prior to March 18 when Rule 600 was suspended due to the judicial emergency procedures imposed by Saylor.

Samantha Jo Delcamp, 25, is charged as an accomplice in the murder of her 3-year-old daughter. She remains in Centre County Correctional Facility.

Burgess, who is Delcamp’s former boyfriend, is charged with an open count of criminal homicide. He is accused of severely beating Parker between July 19 and Oct. 10, 2019. The child remained in critical condition on a respirator at Geisinger Medical Center in Danville before passing away Nov. 22, 2019.

He remains in Northumberland County Jail after being denied bail due to the murder charge.

All the charges were filed by Trooper Brian Siebert, of state police at Montoursville.

Delcamp previously testified that Burgess was responsible for inflicting serious injuries on her daughter that led to her eventual death. She also claimed Burgess repeatedly assaulted her.

Delcamp lived with Parker and Burgess at 725 W. Shamokin St., Trevorton, at the time of the child’s severe beating.

She said it was about an hour between the time her daughter suffered a seizure Oct. 10, 2019, and 911 was called. She said her daughter was transported by ambulance to Geisinger Medical Center in Danville.

Delcamp said she didn’t report the abuse because she was afraid of Burgess and still is. She said her fear of Burgess led her to lie to police and not report Burgess’ abuse on herself and her daughter. 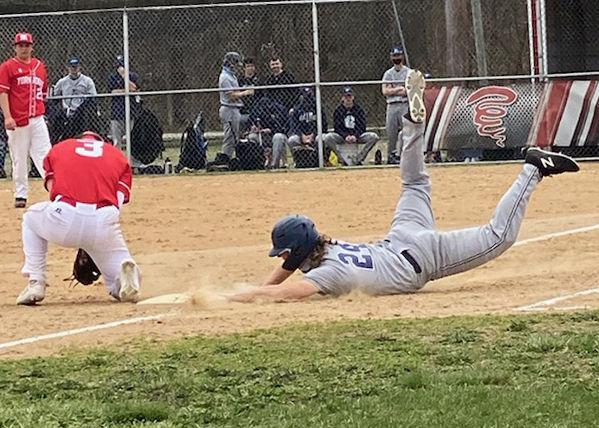 Central Columbia’s Carter Crawford slides back safely to third base as Mount Carmel’s Casen Sandri (3) fields a throw by the catcher during a high school baseball game Saturday in Kulpmont.

SHAMOKIN — City council at their regular meeting Monday approved the opening of the Lawton W. Shroyer Memorial Swimming Pool as well as various community events, including fireworks shot from the Glen Burn Bank on July 3.

The approvals are in stark contrast to last year when council nixed the annual fireworks display by Citizens for a Better Community (CBC) and opening of the community pool on North Rock Street due to the pandemic. Mayor John Brown and council have since expressed regret for cancelling the fireworks show, although a show sponsored by the city was held in its place.

“I see that the opening of the pool is on the agenda. Bravo,” resident Robert Derk commented prior to council voting on the matter. “Anything that gets us back to normal is greatly appreciated.”

Councilwoman Jennifer Seidel said opening of the pool is tentatively set for the weekend of June 4, contingent upon staffing, weather and mechanical issues. She provided an overview of guidelines related to the pandemic that include 75% occupancy at outdoor fitness facilities.

The fireworks are set to return to the Glen Burn Bank overlooking the city at dusk July 3. The rain date is July 4. Council also approved curbside collections on state Route 61 near the Cameron Bridge, Second Street near Walnut, and Route 61 near Sunbury Street. Money raised will go toward the 2022 show.

Council also approved Covered Bridge Brewhaus to change the date of a previously scheduled event to Saturday, May 22, from noon to 11 p.m.; West End Fire Co. to hold its annual block party on Friday, June 4, and Saturday, June 5; and Shamokin Area Businesses for Economic Revitalization (SABER) to hold an Independence Day on Independence Street event on Saturday, July 3, from noon to 9 p.m.

Council agreed to suspend the city’s open container policy for each event during the specified operating times.

Council also allowed Advancing the Kingdom to hold an event from 8 a.m. to 4 p.m. Saturday, May 8, with the event corridor to be determined by city officials.

Council approved requests from Faith Alliance for Revitalization (FAR) and its Better Together Community group to hold a Metal Mania recycling event in the Bader’s Fine Furniture parking lot and a used clothing drive in the municipal parking lot. Both events will be held 10 a.m. to 4 p.m. Saturday, May 15.

The annual Memorial Day march and service on Lincoln Street will be conducted by the Veterans of Foreign Wars from 9:15 to 10:30 a.m. on Monday, May 31.

In other business, council entered into a contract with J&S Landscaping at a discounted rate of $2,000 to excavate and level a proposed community garden in the 100 block of West Sunbury Street. The project is being under taken by Shamokin Community Gardens.

Volunteers with the organization advised council that the firm suggested the area be excavated due to the number or bricks and other debris. Once that work is completed the organization, they said, plans to beatify the area with flower gardens, trees, vegetable boxes, solar lighting and seating.

The following actions were also under taken by council:

• Entered into an engineering contract with Stromberg, Garrigan and Associates in the amount of $39,500 for Illumination Station, which is proposed along the 100 block of East Independence Street.

• Authorized the Shamokin Police Department to enter into an agreement with Southern Columbia Area School District to have student Ethan Roughton participate in a police co-op program.

• Authorized Administrator Robert Slaby to send a letter of support to the Pennsylvania Liquor Control Board concerning the application for a distillery license for the Coal Stoker Distillery, 49 E. Independence St.

• Approved the second and final reading of Ordinance 21-02, vacant property registration, which city officials said will assist the city in its effort to hold accountable property owners for their vacant buildings.

• Announced that a public meeting regarding the adoption of a government study commission will be held 6:30 p.m. Thursday, April 29, in the Northumberland County Career and Arts Center.