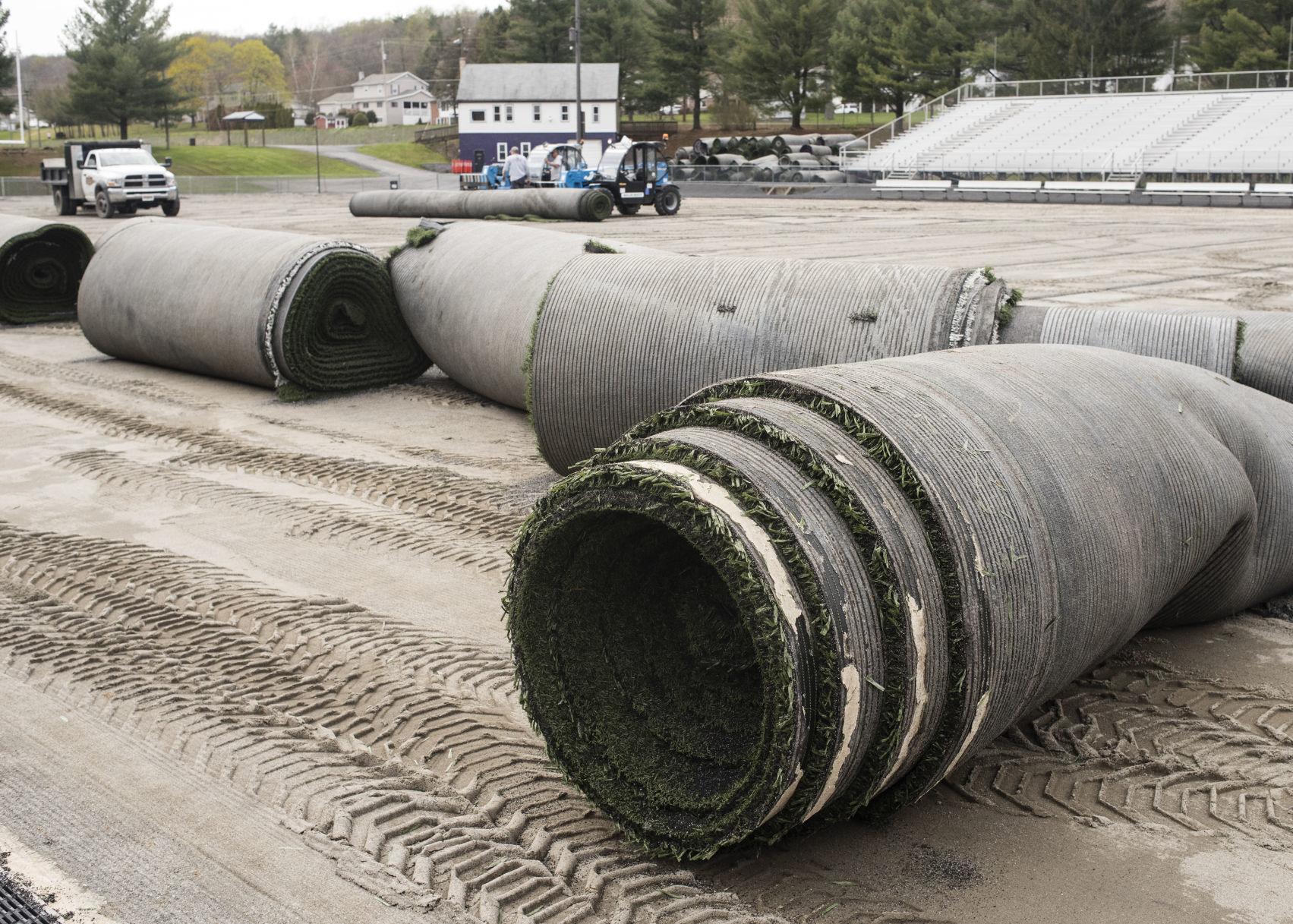 A crew removes the turf at Kemp Memorial Stadium on Tuesday. The district previously announced that an anonymous male alumnus will donate $250,000 toward replacing the turf, which was originally installed in 2005. The total cost of the project is $442,750. The purple "S" at the center of the field was saved with intentions to place it in a locker room.

Gina Gratti, a senior at Southern Columbia Area, holds gifts that she received from the Kramer family, of Ralpho Township.

FRANKLIN TOWNSHIP — With the novel coronavirus restrictions interrupting end-of-year activities for high school students, a national movement to support and encourage them has rapidly gained momentum in the Susquehanna Valley.

The Southern Columbia Area School District community is honoring the Class of 2020 by participating in the “Adopt a Senior” campaign, which asks well-meaning residents to choose a senior to whom they would be willing to send letters of encouragement and small packages.

Similar campaigns have sprung up in other districts in the area, including Shamokin and Mount Carmel. The students routinely post photos of themselves with the unexpected gifts on social media.

Brassard, whose son Franklin is a senior, said she created a Facebook group on April 17 for parents of seniors to post photos and a biography of their child. Individuals and families then “tagged” a senior they intended to adopt.

“Every day kids are getting stuff. They are thrilled and the people who have adopted are just as happy,” Brassard said. “It just took off. I was shocked.”

Brassard said some seniors have been adopted by more than one person or from someone living outside the district. “Adoptive parents,” she said, were encouraged to learn about their senior.

Franklin was “blown away” when he received colored pencils, a sketch book, food and a “Quarantined Class of 2020” T-shirt from a family friend in the Danville area.

“When we are under pressure we come together pretty well,” Brassard said of the Tiger community. “We are just here to make the kids happy.”

Senior Gina Gratti, who does not use Facebook, was unaware who adopted her until late last week when the Kramer family of Ralpho Township dropped off a balloon, a Class of 2020 stuffed bear and a Sheetz gift card at her Elysburg home.

“Two days ago (Sunday) they came back over with a big can of sticky buns. The whole family has been digging into it,” Gratti said with a laugh.

Gratti said a friend who enjoys camping is set to receive a basket filled with an array of outdoor-related products, such as s’more supplies.

“Friends are adopting each other and giving gifts. It is great everyone is getting involved. With how it is now, it’s something nice for the seniors to be recognized,” Gratti said. “The community is stepping up to help. Everyone is making our senior year really special.”

Although Gratti said it’s been a tad rough with the loss of track season and uncertainties surrounding prom and graduation, the future soccer player at King’s University said administrators at Southern Columbia are passionate about making her senior year the best it can be.

Senior Emma Rosko was adopted by Mandi Stine. The high school council president received treats from one of her favorite eateries: Dunkin’.

“I think it’s an awesome idea and definitely brought a smile to my face during these hard times,” the future Penn State University engineering student said. “Trying to do school online for my last couple months of high school has been really stressful and hard, but thanks to the families and everyone that put this together, I think it brightened a lot of the seniors’ days.”

Convicted felon Ernest Pennycoff, 27, of 1005 Walnut St., is accused of engaging in sexual intercourse with a 13-year-old female between June 17 and April 22.

The charges were withdrawn and refiled Tuesday to include felonies of rape, rape of a child and two counts of aggravated indecent assault of a child. He faces a total of 12 felonies and four misdemeanors.

According to the criminal complaint, the aunt of the victim reported to Ketchem that Pennycoff sexually assaulted the girl at his residence on April 22. The victim reportedly kneed the defendant in the groin and then fled the residence.

The victim told Ketchem that on April 1 she and the defendant engaged in sexual intercourse. She also described several acts of a graphic nature that occurred in the past between her and the defendant.

Chief Brad Hare went to interview Pennycoff at his home, but the defendant is alleged to have fled after learning of the officer’s presence. The chief spotted the defendant run out the back door and head towards the dike near South Tenth Street. The defendant ignored orders to stop, the complaint states.

Officers apprehended Pennycoff while attempting to climb a hill near South Tenth Street.

During an interview at the police station, Pennycoff is alleged to have nodded in the affirmative and stated “yes” when asked if he knew why he was being questioned.

According to the complaint, Pennycoff admitted to officers that he pulled down the pants of the victim because “she was in trouble.” He also stated that he sexually assaulted her. The victim, he added, pushed him away.

Pennycoff said he understood what sex is and went on to admit to engaging in sex with the victim, but claimed to have “short-term memory loss” when officers asked for further details.

Pennycoff pleaded guilty in March 2017 to five felony counts of burglary and was sentenced to nine months to two years in prison in connection with an incident in the Milton area in December 2016.

In June 2018, he also pled guilty to felony counts of burglary and possession of a firearm while being a convicted felon and was sentenced to one to two years in prison.

MANDATA — The Line Mountain School District has contracted with a firm to conduct a virtual commencement at 7:30 p.m. Thursday, June 4.

The district will use the services of Herff Jones to play pre-recorded speeches by the valedictorian, salutatorian, high school Principal Jeff Roadcap and Superintendent Dave Campbell.

The company states on its website that it can virtually gather students and their families to celebrate commencement. It has the ability to play audio of each student’s names as a personalized slide is displayed.

It also permits each new graduate their individual “move the tassel” moment with a personalized video file.

“Herff Jones reached out to us. We went with them because they have a 17-year track record, including streaming commencement for the University of Phoenix,” Campbell said following Tuesday night’s school board meeting. “It’s not what we wanted to do, but if we are going to do it this way, we can’t find anything better than what we’re doing.”

He said students can use their computers and cell phones to participate in the ceremony.

More information is expected in the next few days with further details on the procedure and program at www.herffjones.com.

In the event the Pennsylvania Department of Education allows districts to hold a traditional commencement service, Line Mountain stated it would do that in addition to the virtual graduation.

The baccalaureate service from Himmel’s Church will be live streamed at 7 p.m. Thursday, May 21.

In other business, a preliminary 2020-21 budget that is recommended without a tax increase was unanimously approved by the board.

In addition to the new planned instruction, the district will continue to offer enrichment and review, which consists of informal activities that reinforce or extend students’ prior learning.

The district is still planning the last day of school to be Thursday, May 28. The district will have completed 173 of 180 days, as well as 909.7 and 994.5 hours at the elementary and middle/high schools, respectively, as of May 28. A waiver will be sought for the loss of seven days of instruction.

The board announced that its May meeting is canceled. The next scheduled meeting is June 2.

Michelle Obama appears in the upcoming documentary “Becoming,” which will be released under the Obamas’s Higher Ground Productions banner.