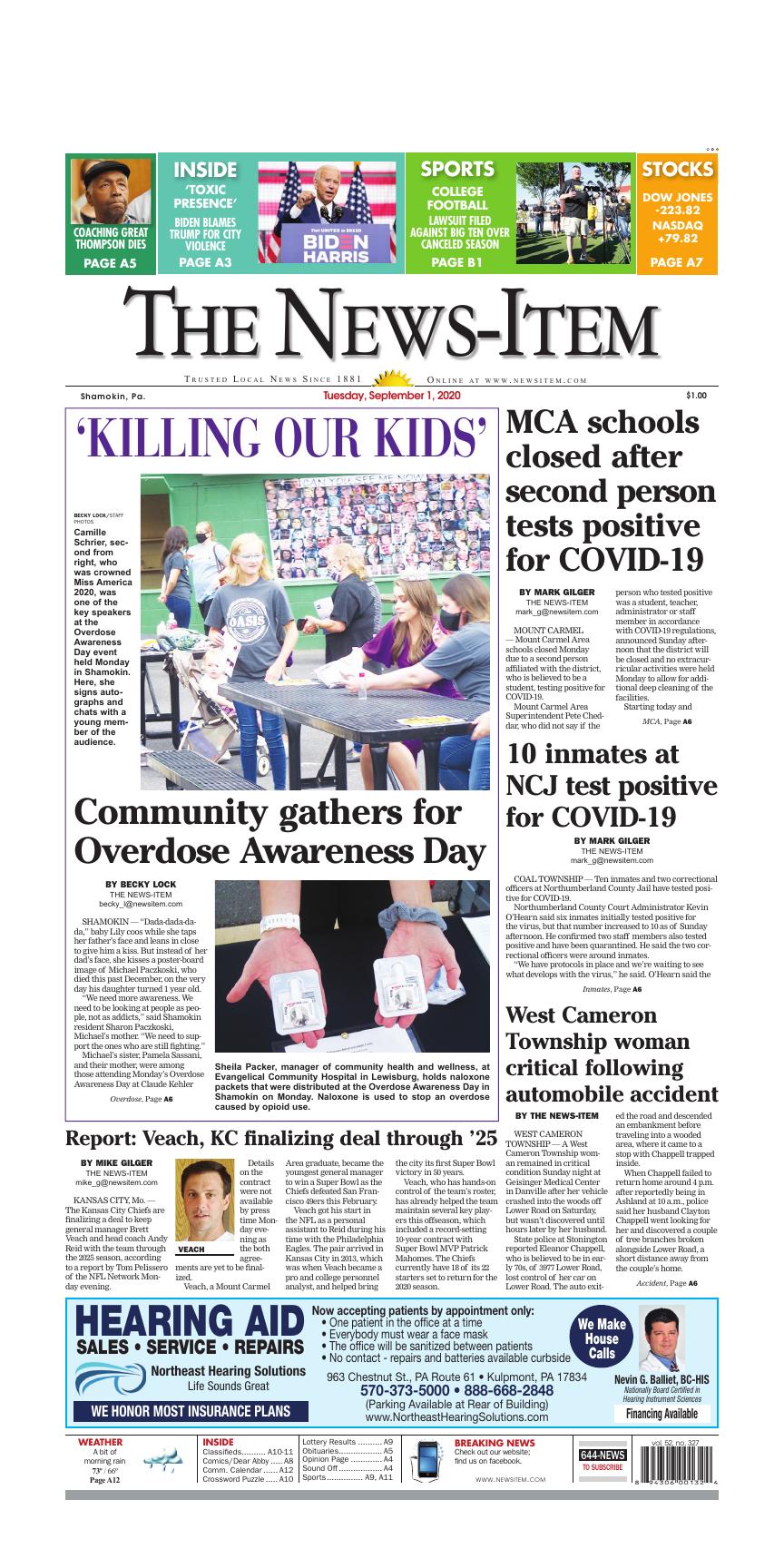 Each of the “Can You See Me Now” posters includes about 150 images of people who fatally overdosed. The posters were part of the Overdose Awareness Day held Monday at Claude Kehler Community Park in Shamokin.

Camille Schrier, second from right, who was crowned Miss America 2020, was one of the key speakers at the Overdose Awareness Day event held Monday in Shamokin. Here, she signs autographs and chats with a young member of the audience.

Sheila Packer, manager of community health and wellness, at Evangelical Community Hospital in Lewisburg, holds naloxone packets that were distributed at the Overdose Awareness Day in Shamokin on Monday. Naloxone is used to stop an overdose caused by opioid use.

SHAMOKIN — “Dada-dada-dada,” baby Lily coos while she taps her father’s face and leans in close to give him a kiss. But instead of her dad’s face, she kisses a poster-board image of Michael Paczkoski, who died this past December, on the very day his daughter turned 1 year old.

“We need more awareness. We need to be looking at people as people, not as addicts,” said Shamokin resident Sharon Paczkoski, Michael’s mother. “We need to support the ones who are still fighting.”

Michael’s sister, Pamela Sassani, and their mother, were among those attending Monday’s Overdose Awareness Day at Claude Kehler Community Park.

The event was organized by the Greater Susquehanna Valley United Way and featured speakers by people in recovery or who have experienced addiction in their lives. Other speakers included Dan Schneider, whose story has been documented in Netflix’s “The Pharmacist,” and Miss America 2020, Camille Schrier, of Virginia.

“Today is a bittersweet day,” said Joanne Troutman, president and CEO of the United Way chapter, adding that the event, which was webcast on Facebook Live, was designed to draw attention to the issue of substance abuse and its existence in Shamokin and surrounding communities.

National Overdose Awareness Day is Aug. 31, and is followed by National Recovery Month in September.

All of the speakers related their personal experiences with how drug abuse has affected them. Some spoke of fatal overdoses or homicides that crushed their families. Others shared how their loved ones struggle daily to stay on the path to recovery. In the audience, onlookers remembered their own sons and daughters, sisters and brothers.

Kathy Zack, of Sunbury, said her 23-year-old son, Dalton, died Jan. 1, 2019, the victim of a fatal fentanyl overdose. He had gone out with friends on New Year’s Eve and returned home early in the morning. His family found him dead in the bathroom.

“There was no heroin or alcohol in his system,” Kathy said. “It was fentanyl. It just breaks my heart.”

Kathy, along her her mother, Mary Koons, came to Shamokin from Sunbury for the event. Dalton’s sister, Jessica Faust, came from Middleburg.

“We don’t have anything like this in Sunbury,” Kathy said.

Koons keeps an empty chair at her home, as a reminder that Dalton no longer is there with his family. All three women wear semicolon tattoos. The significance, they say, is that “his story is not over.”

Indeed, the stories shared Monday prove that the fight for awareness — and change — is far from over.

More places for people, even children, who need a safe place to eat and sleep would be an asset, Zack said.

“I disagree with places where it’s safe to go and shoot up,” she said, referring to supervised injection sites.

“Prevention, treatment and recovery” are key in the battle against overdose and abuse, said Camille Schrier. The 2020 Miss America winner has worked toward awareness over the past year. She also is pursuing a doctor of pharmacy degree.

“We have the power to stop this disease from spreading. Education is crucial, and prevention is the most cost-effective way” to stop addiction, she said. “Fully understanding your own prescriptions is part of that.”

In fact, some speakers discussed how painkillers legally prescribed by a doctor led someone they loved into addiction. Leslie Ward’s son, who now is 23, developed a Percocet habit that devolved into a “full-blown heroin addiction” by the time he was 17.

“We knew he had a problem. We just didn’t know to the extent,” she said.

A 30-day rehab program was not going to work, she knew.

Her son enrolled twice in a rehabilitation center called the Pennsylvania Adult and Teen Challenge. That second time, “he called Teen Challenge himself. He didn’t want to live like that anymore. He had empowered himself,” she said.

Dan Schneider’s son didn’t get the chance to empower himself. He was murdered in while trying to buy crack cocaine in 1999, Schneider said.

“The stigma hit me in the face,” Schneider said, adding that the reaction from his local police force was far less than he expected. “Look, most policemen are good policemen. They have a tough job and we have to support them.”

But in his Louisiana town, the going belief when someone involved in drugs died, he said, was, “Well, he got what he deserved.

“I got a different take on that,” Schneider said. “The (the police) did very little and what they did, they screwed up. We deserve justice.”

Schneider found some small bit of justice and now works to help others whose loved ones struggle with addiction.

Ward’s son, Ethan, will have three years in recovery early next year.

“I watch him struggle every day,” she said. “Anybody can be affected by addiction. We need each other’s help and support.”

KANSAS CITY, Mo. — The Kansas City Chiefs are finalizing a deal to keep general manager Brett Veach and head coach Andy Reid with the team through the 2025 season, according to a report by Tom Pelissero of the NFL Network Monday evening.

Details on the contract were not available by press time Monday evening as the both agreements are yet to be finalized.

Veach got his start in the NFL as a personal assistant to Reid during his time with the Philadelphia Eagles. The pair arrived in Kansas City in 2013, which was when Veach became a pro and college personnel analyst, and helped bring the city its first Super Bowl victory in 50 years.

Veach, who has hands-on control of the team’s roster, has already helped the team maintain several key players this offseason, which included a record-setting 10-year contract with Super Bowl MVP Patrick Mahomes. The Chiefs currently have 18 of its 22 starters set to return for the 2020 season.

MOUNT CARMEL — Mount Carmel Area schools closed Monday due to a second person affiliated with the district, who is believed to be a student, testing positive for COVID-19.

Mount Carmel Area Superintendent Pete Cheddar, who did not say if the person who tested positive was a student, teacher, administrator or staff member in accordance with COVID-19 regulations, announced Sunday afternoon that the district will be closed and no extracurricular activities were held Monday to allow for additional deep cleaning of the facilities.

The elementary school will remain open to all students who chose in-person instruction starting today.

“We apologize for the lateness of this message, but this decision was made after hours of communication with the Pennsylvania Department of Health, local emergency management officials and our school board and administration,” Cheddar said. “All of those mentioned are aware of our second confirmed case. The Pennsylvania Department of Health will be working closely with our school district to determine if any student or staff member would need to possibly quarantine as a result of this second case.”

Cheddar warned parents and students that guidance could change at a moment’s notice and families are asked to prepare for any possible child care-related issues moving forward.

On Friday, Cheddar reported one district student tested positive for coronavirus. Cheddar said the student had not attended any classes at the school, but had participated in an after-school activity last week. He said students who were in contact with the student who tested positive for the virus will be quarantined for 14 days from the last close contact with the student, as per Pennsylvania Department of Health guidelines.

Prior to receiving notification of a second person in the school district testing positive for COVID-19, Cheddar said he expected classes to resume Monday.

Northumberland County Court Administrator Kevin O’Hearn said six inmates initially tested positive for the virus, but that number increased to 10 as of Sunday afternoon. He confirmed two staff members also tested positive and have been quarantined. He said the two correctional officers were around inmates.

“We have protocols in place and we’re waiting to see what develops with the virus,” he said. O’Hearn said the state Department of Health has been notified of the positive tests.

He added, “We are monitoring the situation and the affected inmates have been isolated from the rest of the jail population.”

The court administrator said the county is working with its medical provider PrimeCare Medical to prevent the spread of the virus. He said inmates aren’t on lockdown, but remain in small groups.

“Inmates will still be allowed to make calls, but we will just change the way this is done and make sure everyone is safe,” he said.

Northumberland County Commissioner Chairman Sam Schiccatano said the county is monitoring the situation at the jail every day and will continue to provide updates about the virus to the public as they become available.

“We are looking at reducing the population, which was at 220 as of Saturday,” Schiccatano said. “We are checking who can be released and we are prepared to handle the situation if the virus spreads to other inmates and guards.”

The jail in Coal Township can hold a maximum of 284 inmates.

WEST CAMERON TOWNSHIP — A West Cameron Township woman remained in critical condition Sunday night at Geisinger Medical Center in Danville after her vehicle crashed into the woods off Lower Road on Saturday, but wasn’t discovered until hours later by her husband.

State police at Stonington reported Eleanor Chappell, who is believed to be in early 70s, of 3977 Lower Road, lost control of her car on Lower Road. The auto exited the road and descended an embankment before traveling into a wooded area, where it came to a stop with Chappell trapped inside.

When Chappell failed to return home around 4 p.m. after reportedly being in Ashland at 10 a.m., police said her husband Clayton Chappell went looking for her and discovered a couple of tree branches broken alongside Lower Road, a short distance away from the couple’s home.

Upon stopping and further investigating, Clayton Chappell found his wife trapped in the car and called 9-1-1 for assistance.

Firefighters and emergency personnel from East Cameron Township, Trevorton and Shamokin responded to the scene and used a ladder to descend the embankment before freeing the victim from the wreckage with the Jaws of Life.

Chappell was removed from the car and placed on a gurney, which was pulled up the embankment with ropes. The victim was then transported by ambulance to the former West Cameron Township Elementary School, where she was flown by Life Flight helicopter to Geisinger.

Chappell’s car was towed from the scene.

Trooper Jordan Judson, of state police at Stonington, is continuing his investigation of the crash. He was assisted at the scene by Zerbe Township police.

The scene was cleared shortly before 8 p.m. 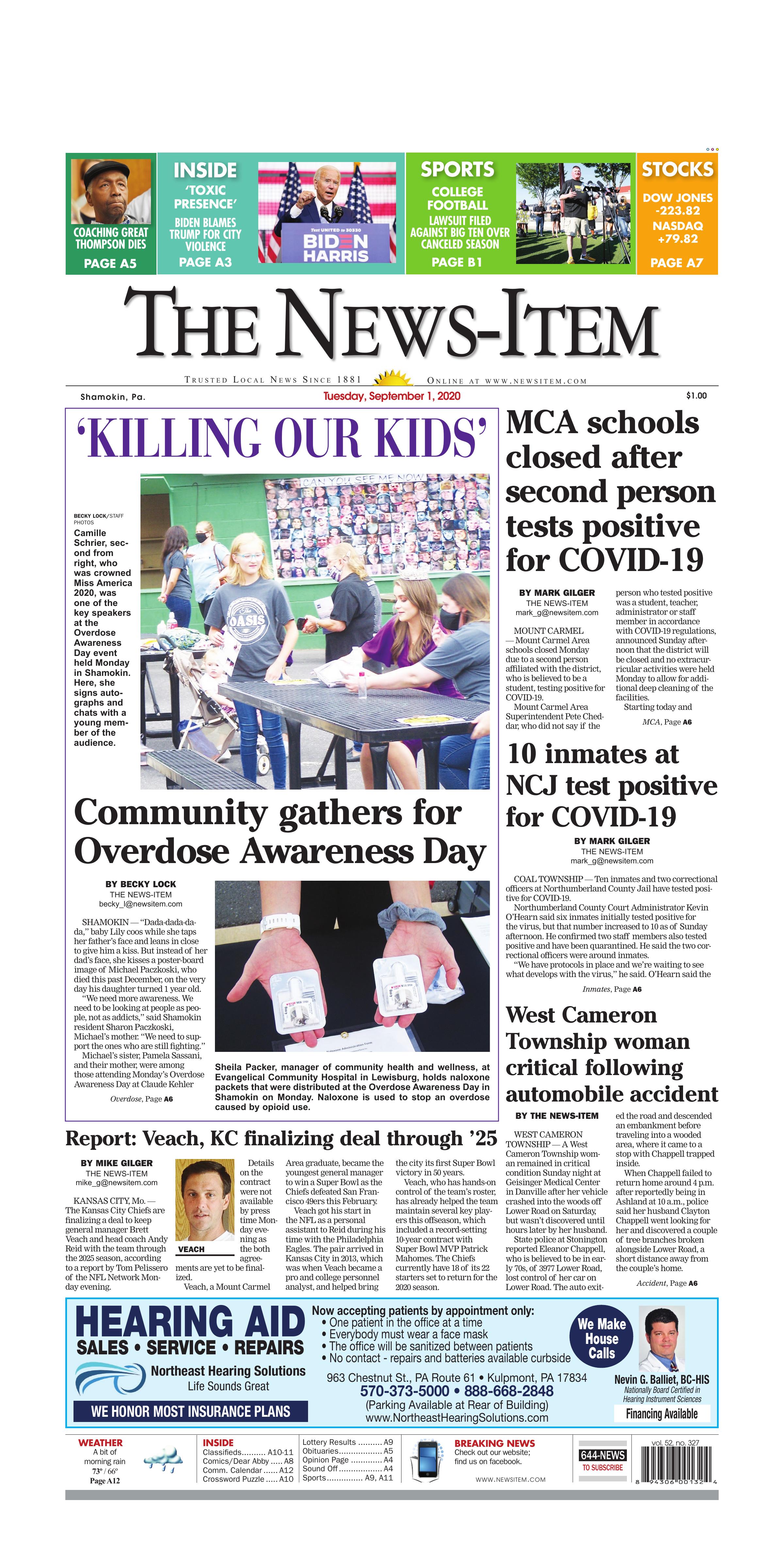