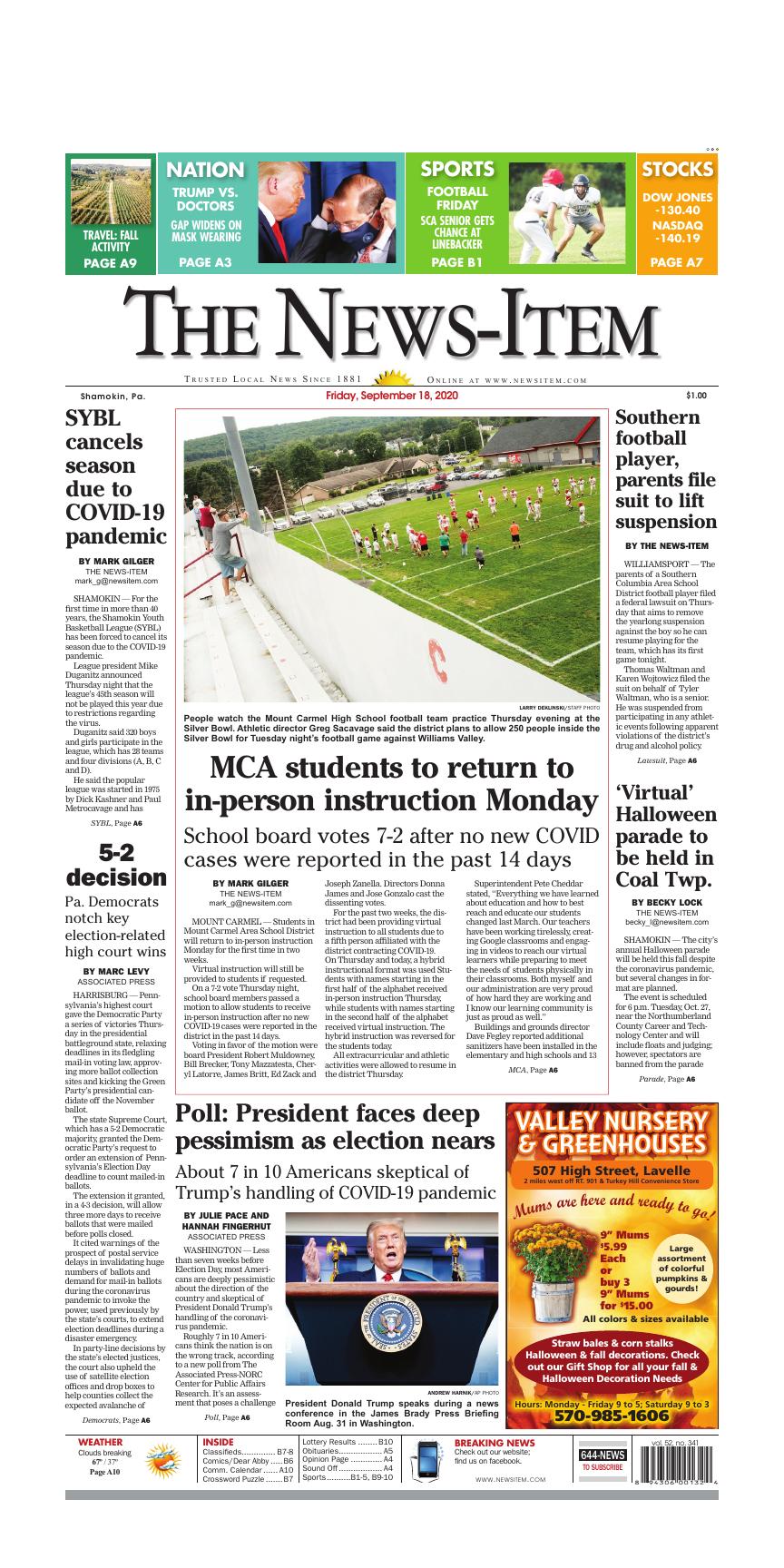 Virtual instruction will still be provided to students if requested.

On a 7-2 vote Thursday night, school board members passed a motion to allow students to receive in-person instruction after no new COVID-19 cases were reported in the district in the past 14 days.

All extracurricular and athletic activities were allowed to resume in the district Thursday.

Superintendent Pete Cheddar stated, “Everything we have learned about education and how to best reach and educate our students changed last March. Our teachers have been working tirelessly, creating Google classrooms and engaging in videos to reach our virtual learners while preparing to meet the needs of students physically in their classrooms. Both myself and our administration are very proud of how hard they are working and I know our learning community is just as proud as well.”

Buildings and grounds director Dave Fegley reported additional sanitizers have been installed in the elementary and high schools and 13 new cafeteria tables have been purchased in light of the pandemic. He said revisions have been made to the heating/ventilation and air conditioning system to allow more outside air to come into the schools.

Athletic director Greg Sacavage said the district plans to allow 250 people inside the Silver Bowl for Tuesday night’s football game between the Mount Carmel Area Red Tornadoes and Williams Valley Vikings. The season opener for Mount Carmel Area will kick off at 7 p.m.

Parents of band members will be allowed in the stadium with a ticket to watch their children perform in the Big Red Marching Band prior to the game, but must exit the stadium with the band after its performance.

Each Williams Valley player will be issued one ticket for the game.

There will be concession stands outside the gates on each side of the stadium and rest room facilities will be available.

Masks must be worn by spectators and social distancing will be in effect as well as all other COVID-19 regulations.

The game will be livestreamed on the school district’s YouTube channel on WKMC/TV. Information about logging onto the channel can be found on the district’s website.

The board unanimously approved a request to extend the Keystone Opportunity Zone covering unoccupied portions of the SEEDCO Industrial Park in Coal and Mount Carmel Townships for another 10 years, expiring Dec. 31, 2030.

Directors approved the annual service/maintenance agreement contract with McClure Company in the amount of $2,757.

The board accepted the resignation of music and marching band instructor Kelly Lucas and hired Christopher Stellar to replace her at a salary of $800.

The board also accepted the resignation of aide Colleen Klaus. 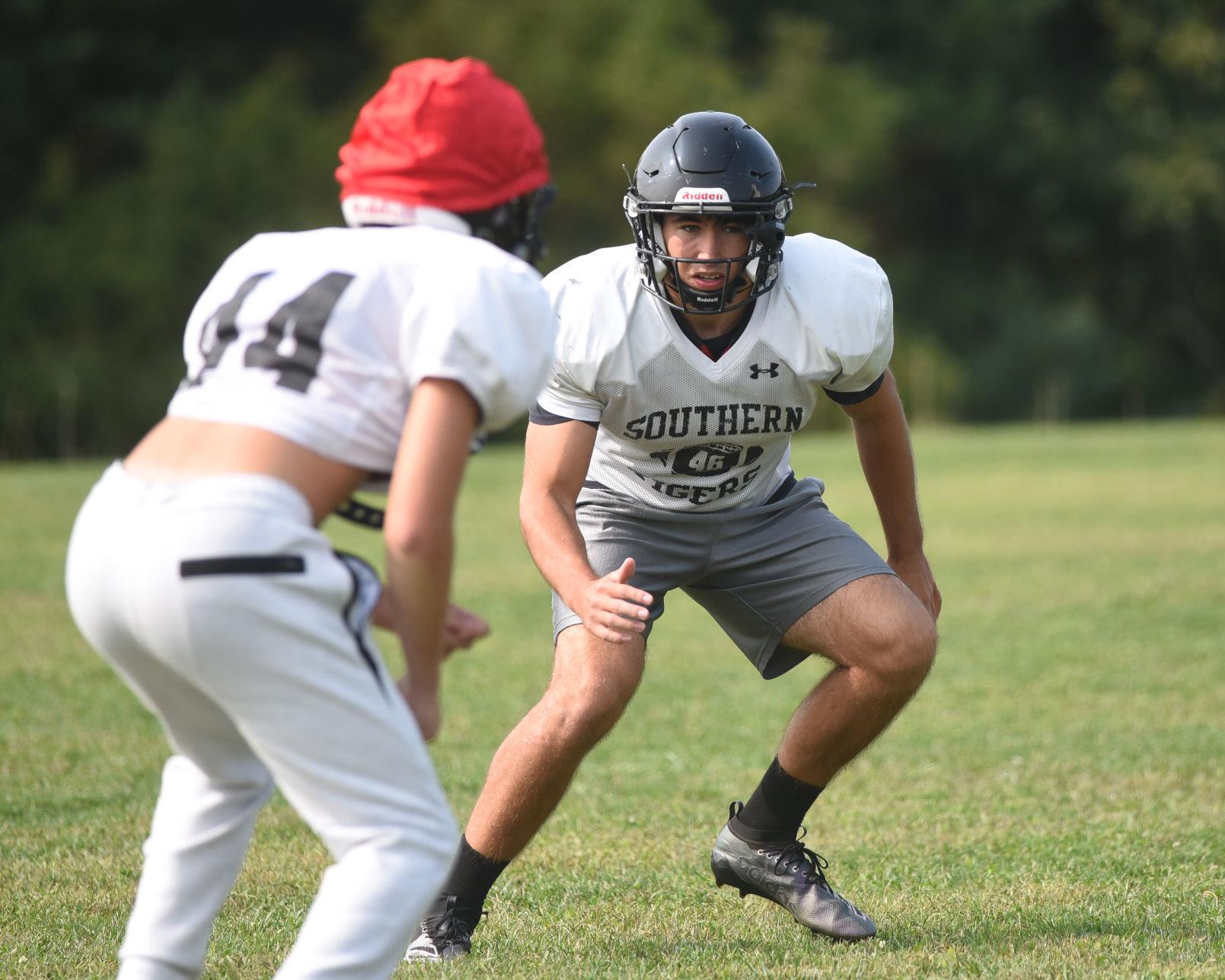 Southern Columbia senior inside linebacker Wade Kerstetter is shown during a practice Wednesday. 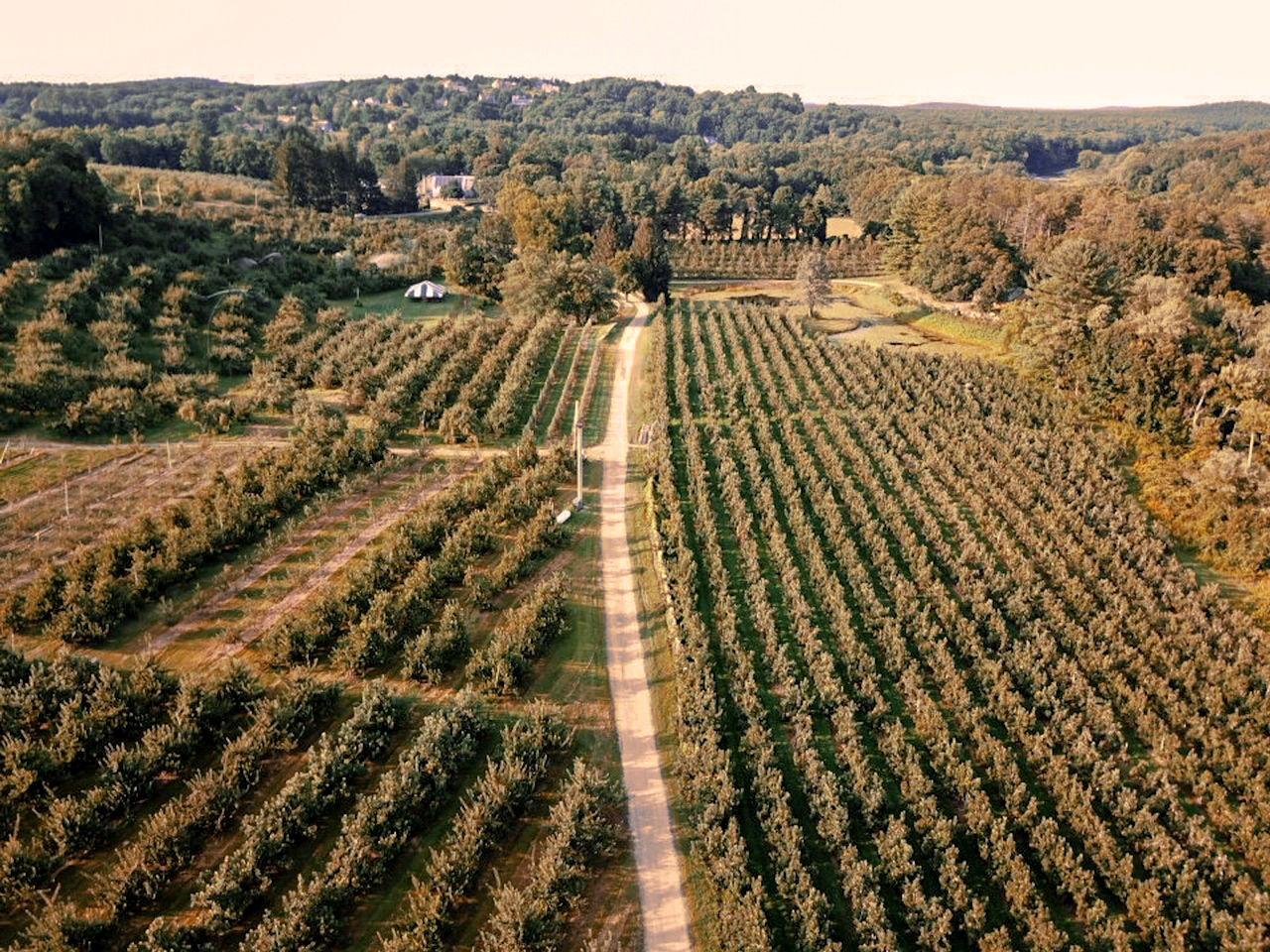 Honey Pot Hill Orchards, in Stow, Massachusetts, will be open this fall despite COVID-19.

SHAMOKIN — For the first time in more than 40 years, the Shamokin Youth Basketball League (SYBL) has been forced to cancel its season due to the COVID-19 pandemic.

League president Mike Duganitz announced Thursday night that the league’s 45th season will not be played this year due to restrictions regarding the virus.

Duganitz said 320 boys and girls participate in the league, which has 28 teams and four divisions (A, B, C and D).

He said the popular league was started in 1975 by Dick Kashner and Paul Metrocavage and has served as a feeder system for Shamokin Area High School boys and girls basketball teams for many years.

Duganitz said it was a “difficult” decision to cancel the season, but a correct one made by league officers when considering the safety of the players, coaches, officials and fans.

“The health and safety of all the participants and fans are our number one priority,” Duganitz said. “With all the restrictions in place, we just can’t have the season. It’s painful for everyone involved, but it’s better to error on the side of caution when dealing with COVID-19.”

Duganitz has been affiliated with the league as a coach or officer for 20 years.

All SYBL games in recent years have been played in the American Legion building in Shamokin and Shamokin Area Elementary School in Coal Township.

WILLIAMSPORT — The parents of a Southern Columbia Area School District football player filed a federal lawsuit on Thursday that aims to remove the yearlong suspension against the boy so he can resume playing for the team, which has its first game tonight.

Thomas Waltman and Karen Wojtowicz filed the suit on behalf of Tyler Waltman, who is a senior. He was suspended from participating in any athletic events following apparent violations of the district’s drug and alcohol policy.

Waltman’s parents allege that the policy, which “applies to all students” also “intentionally targets and discriminates against student athletes.”

The suit states that Tyler, 17, was a member of the football, wresting, and track and field team when he was involved in an off-campus “incident with alcohol” in November of last year.

The school district suspended him for 2 1/2 football games, and he was placed on probation and required to attend drug and alcohol counseling, according to the suit.

In February of this year, Tyler again attended “an off-campus gathering,” but, the suit states, did not consume alcohol or use drugs. His tests for use of controlled substances came back negative, but the district learned of his presence at the party and suspended him from participating in the rest of the wrestling season and for the first four games of the football season, the suit states.

His suspension was reduced because it should have been levied against the track and field season, documents show.

On Sept. 5, Waltman and other students allegedly attended another party with adults and other students. He contends he did not use alcohol or drugs and tested negative for the same, but was suspended from participating in all athletic activities for the 2020-21 school year by the district.

The lawsuit alleges that only Waltman and another football player were disciplined while 10 other partygoers, who participate in other extracurricular activities, were not.

It also alleges that the policy “violates the rights of (Tyler) as well as all other student athletes in the district — in violation of the Equal Protection Clause of the 14th Amendment.”

Through the lawsuit, Thomas Waltman and Wojtowicz are seeking a temporary restraining order against the district against the enforcement of the policy against their son, among other judgements.

SHAMOKIN — The city’s annual Halloween parade will be held this fall despite the coronavirus pandemic, but several changes in format are planned.

The event is scheduled for 6 p.m. Tuesday, Oct. 27, near the Northumberland County Career and Technology Center and will include floats and judging; however, spectators are banned from the parade route and no one will be permitted to walk in the parade. Instead, the event will be broadcast live on the internet so people can watch from home.

“We wanted this to be an interactive experience,” organizer Marty Sinopoli said, “so instead of judges, participants and whoever watches the parade online can vote for their favorite floats in three categories.”

“People start building their floats in July, and it’s already September. We wanted to give them as much time as possible (to create a float),” said Sinopoli, branch manager of the city office of First National Bank.

The parade route will follow a circuit near the vocational school in Coal Township. Part of State and Jackson streets will be closed to accommodate the floats.

Ben Anderson, technology coordinator at Shamokin Area School District, will provide the equipment and experience necessary to livestream the parade.

Only floats that register in advance will be permitted into the parade. Floats will be divided into small, medium and large categories. Marching bands and fire trucks will not participate this year.

The decision to require floats to be registered in advance this year is to “limit contact” in accordance with state social distancing guidelines. In addition, everyone participating in the parade must wear a mask. Anyone who fails to comply will be escorted off the grounds.

Sinopoli said registrants should be on-site by 5 p.m. No one else will be allowed except for the people affiliated with the floats.

Registration forms will soon be available at the 10 S. Market St. branch of First National Bank and The News-Item. Completed forms may be returned to the bank via the drive-thru or the lobby.

The parade is sponsored by First National Bank, AREA Services and The News-Item. 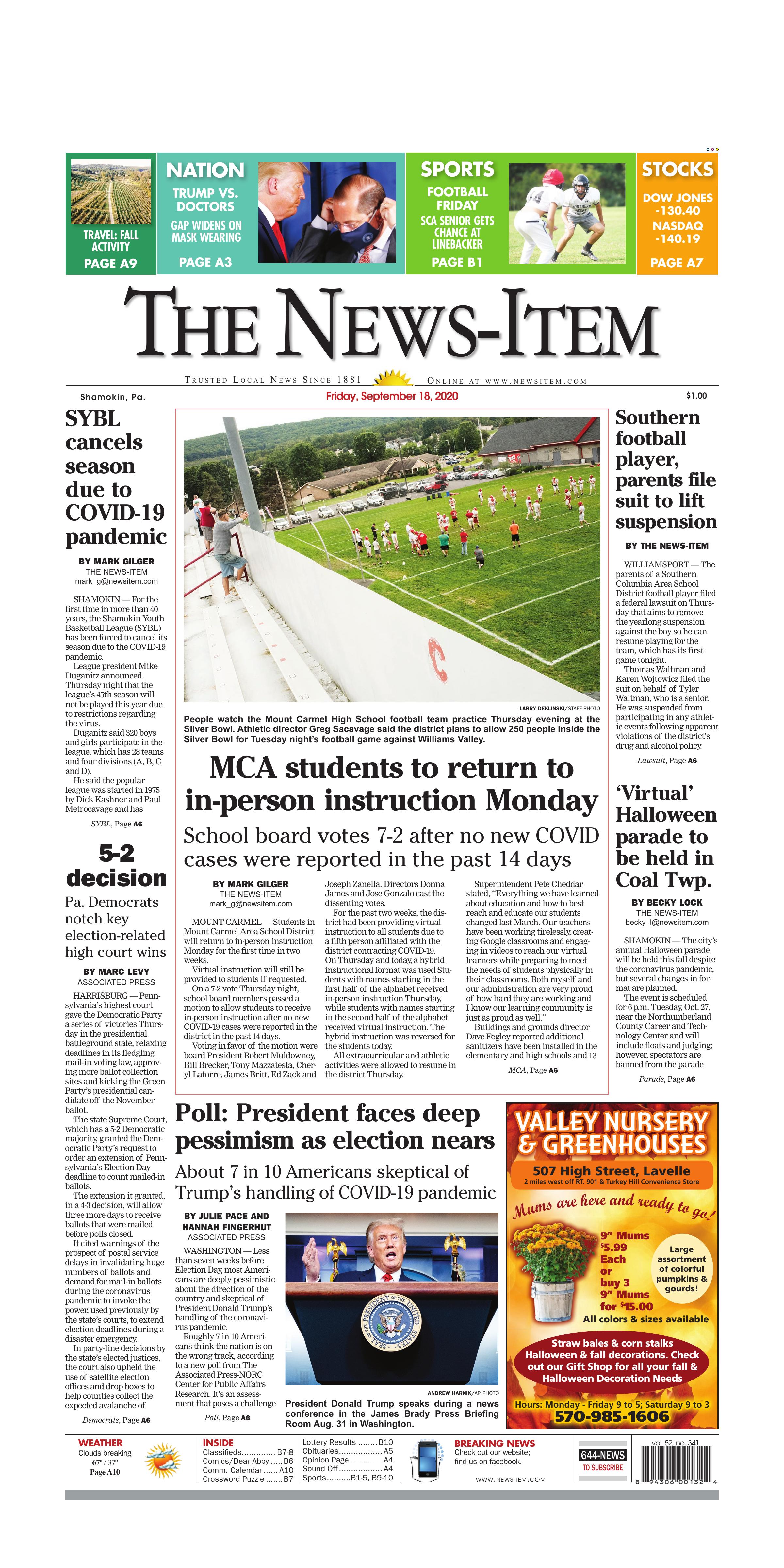