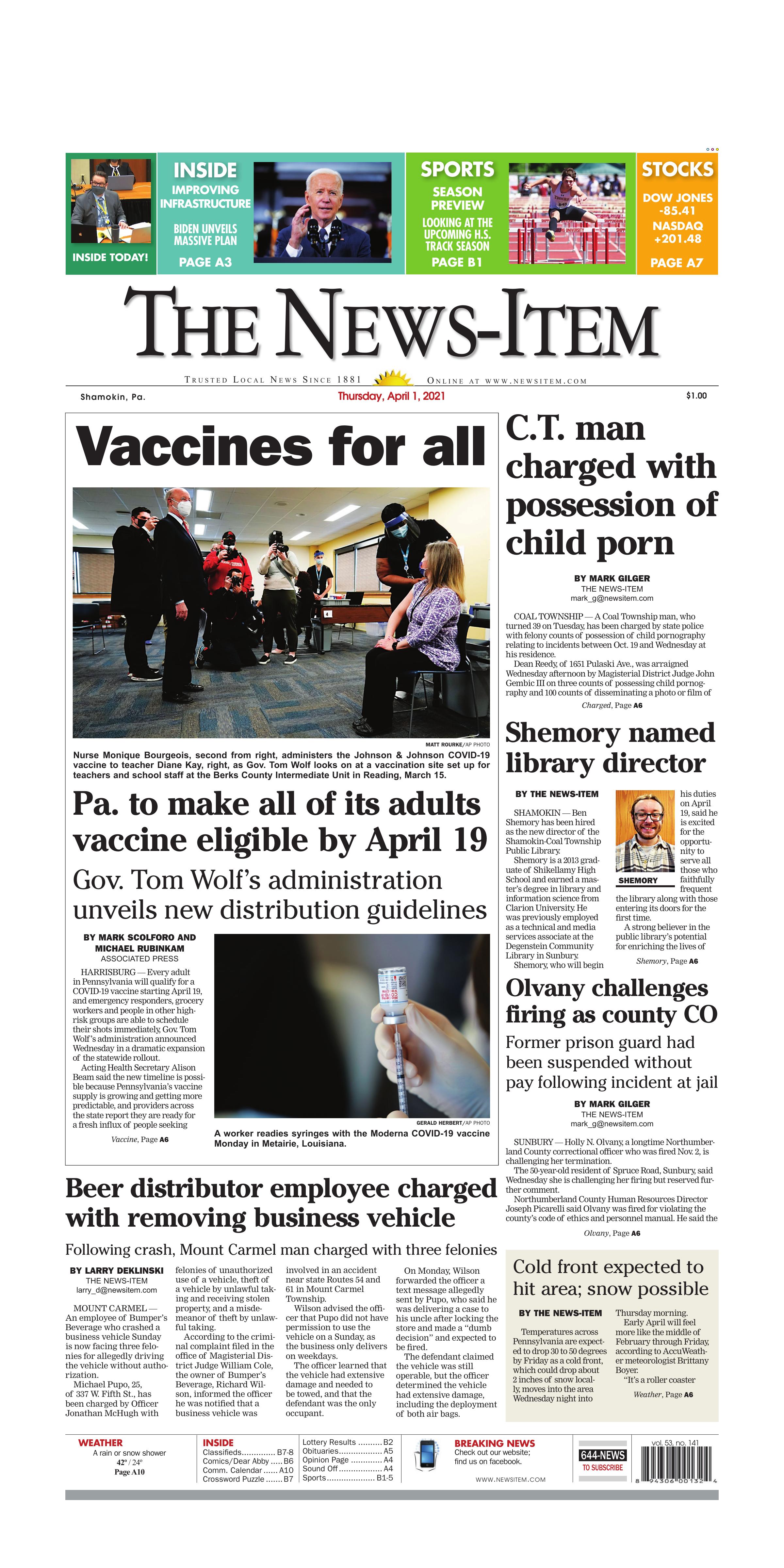 MOUNT CARMEL — An employee of Bumper’s Beverage who crashed a business vehicle Sunday is now facing three felonies for allegedly driving the vehicle without authorization.

According to the criminal complaint filed in the office of Magisterial District Judge William Cole, the owner of Bumper’s Beverage, Richard Wilson, informed the officer he was notified that a business vehicle was involved in an accident near state Routes 54 and 61 in Mount Carmel Township.

Wilson advised the officer that Pupo did not have permission to use the vehicle on a Sunday, as the business only delivers on weekdays.

The officer learned that the vehicle had extensive damage and needed to be towed, and that the defendant was the only occupant.

On Monday, Wilson forwarded the officer a text message allegedly sent by Pupo, who said he was delivering a case to his uncle after locking the store and made a “dumb decision” and expected to be fired.

The defendant claimed the vehicle was still operable, but the officer determined the vehicle had extensive damage, including the deployment of both air bags. 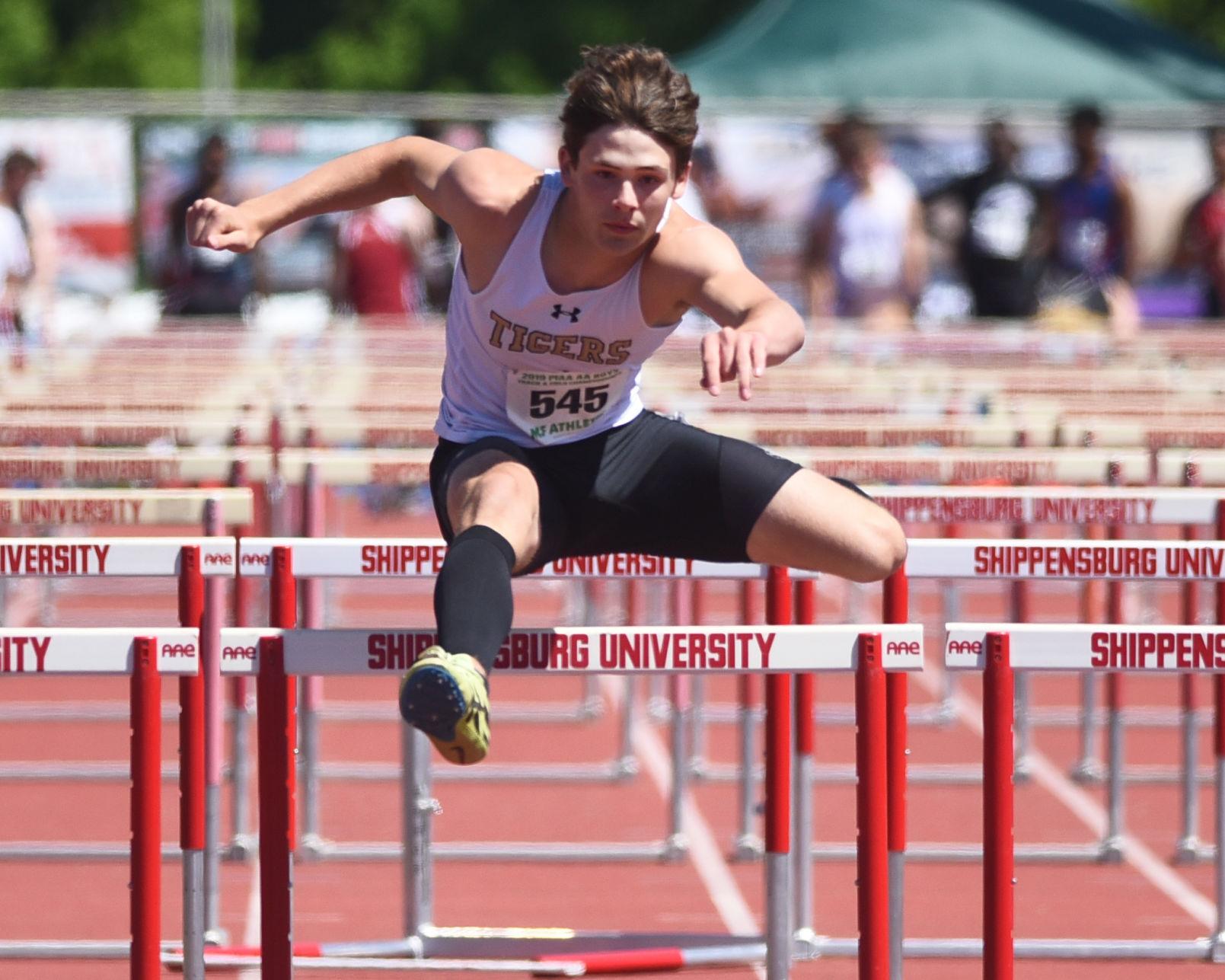 Southern Columbia’s Jake Rose competes in a preliminary heat of the Class 2A 110-meter hurdles at the 2019 PIAA State Track and Field Championships at Shippensburg University on May 24, 2019.

COAL TOWNSHIP — A Coal Township man, who turned 39 on Tuesday, has been charged by state police with felony counts of possession of child pornography relating to incidents between Oct. 19 and Wednesday at his residence.

Police said Reedy is accused of uploading 160 files depicting child pornography, including multiple images or videos on a cell phone of a child engaged in sexual activity with an adult.

In his criminal complaint, Ballantyne said the North East Computer Crime Unit received a referral via the Internet Crimes Against Children (ICAC) Task Force in reference to the investigation. A CyperTip line report was generated by Google Inc. on Nov. 18 for events that occurred between October and November.

The system flagged two uploads of content depicting a prepubescent minor engaged in sexual activity that was later forwarded to the National Center for Missing and Exploited Children.

On Tuesday, a search warrant was obtained for Reedy’s residence and served Wednesday by members of the ICAC Task Force.

While the search warrant was being served, Ballantyne encountered Reedy in his room. He said the defendant provided his phone number and a previous email address that matched those found through the CyberTip.

While interviewed outside his home, Reedy told Ballantyne that no one sent child pornography to him and that he did not send it to anyone. He admitted to looking at child pornography while under the influence of drugs, the complaint states.

During a preview of Reedy’s cell phone, three videos of child pornography were found, Ballantyne said.

Reedy was taken into custody at his home and committed to Northumberland County Jail by Gembic in lieu of $25,000 cash bail.

SHAMOKIN — Ben Shemory has been hired as the new director of the Shamokin-Coal Township Public Library.

Shemory is a 2013 graduate of Shikellamy High School and earned a master’s degree in library and information science from Clarion University. He was previously employed as a technical and media services associate at the Degenstein Community Library in Sunbury.

Shemory, who will begin his duties on April 19, said he is excited for the opportunity to serve all those who faithfully frequent the library along with those entering its doors for the first time.

A strong believer in the public library’s potential for enriching the lives of all residents, Shemory said he looks forward to growing the library’s role within the community and forming new friendships with organizations throughout the area.

Under the direction of the Library Board of Trustees, Shemory will serve as the library’s primary public representative. He will perform administrative and professional work related to planning, organizing, directing, supervising and evaluating all aspects of library services.

The 50-year-old resident of Spruce Road, Sunbury, said Wednesday she is challenging her firing but reserved further comment.

Olvany was suspended without pay, but with benefits, on Feb. 5, 2019, after charges were filed against her involving an incident at the county jail the day before. She remained on that status before being fired.

The seven charges filed against her by Northumberland County Detective Degg Stark in connection with the jail incident were dismissed or withdrawn, with the exception of careless driving. She was later found not guilty of that charge.

On Tuesday, Olvany appeared in court for a criminal motion hearing in which Senior Judge Harold F. Woelfel Jr., of Snyder County, ordered her attorney, Michael Rudinski, of Williamsport, to turn over a doctor’s note within 10 days to the district attorney’s office that can be used as evidence at her trial on a misdemeanor of false swearing.

The note from Dr. Jeff Greco, of Mount Carmel, was presented by Rudinski at Olvany’s preliminary hearing as potential evidence in the case.

The note, which is dated Feb. 28, 2019, states that Olvany was at Greco’s office Feb. 4, 2019, which is the date Olvany allegedly left the county jail abruptly during a drug investigation.

The case has not yet been scheduled for trial.

In November, Magisterial District Judge Michael Toomey, of Sunbury, dismissed a felony of perjury against Olvany for lack of evidence. Toomey ruled the element of the offense wasn’t material to the summary of careless driving.

The judge held the defendant for court on the false swearing offense.

Olvany was charged by Stark with the offenses after she allegedly gave contradicting statements while testifying at an Aug. 12 summary appeal hearing on a charge of careless driving before Senior Judge Dudley Anderson, of Lycoming County, who found Olvany not guilty of the summary offense.

Temperatures across Pennsylvania are expected to drop 30 to 50 degrees by Friday as a cold front, which could drop about 2 inches of snow locally, moves into the area Wednesday night into Thursday morning.

Early April will feel more like the middle of February through Friday, according to AccuWeather meteorologist Brittany Boyer.

“It’s a roller coaster ride here in the Northeast,” she said. “It’s going to go from feeling like spring to feeling like winter.”

A wintry mix of rain and snow was forecasted to enter the southern Northumberland County area by Wednesday night.

AccuWeather is currently forecasting Friday’s temperatures to hover around a high of 37 degrees locally with a low of 25 degrees. Making matters worse, sustained winds of 15 mph and gusts of up to 21 mph are also expected.

However, by Saturday the cold front should be on its way out, with temperatures expected to hit a high of 53 on Saturday and back into the 60s on Sunday.