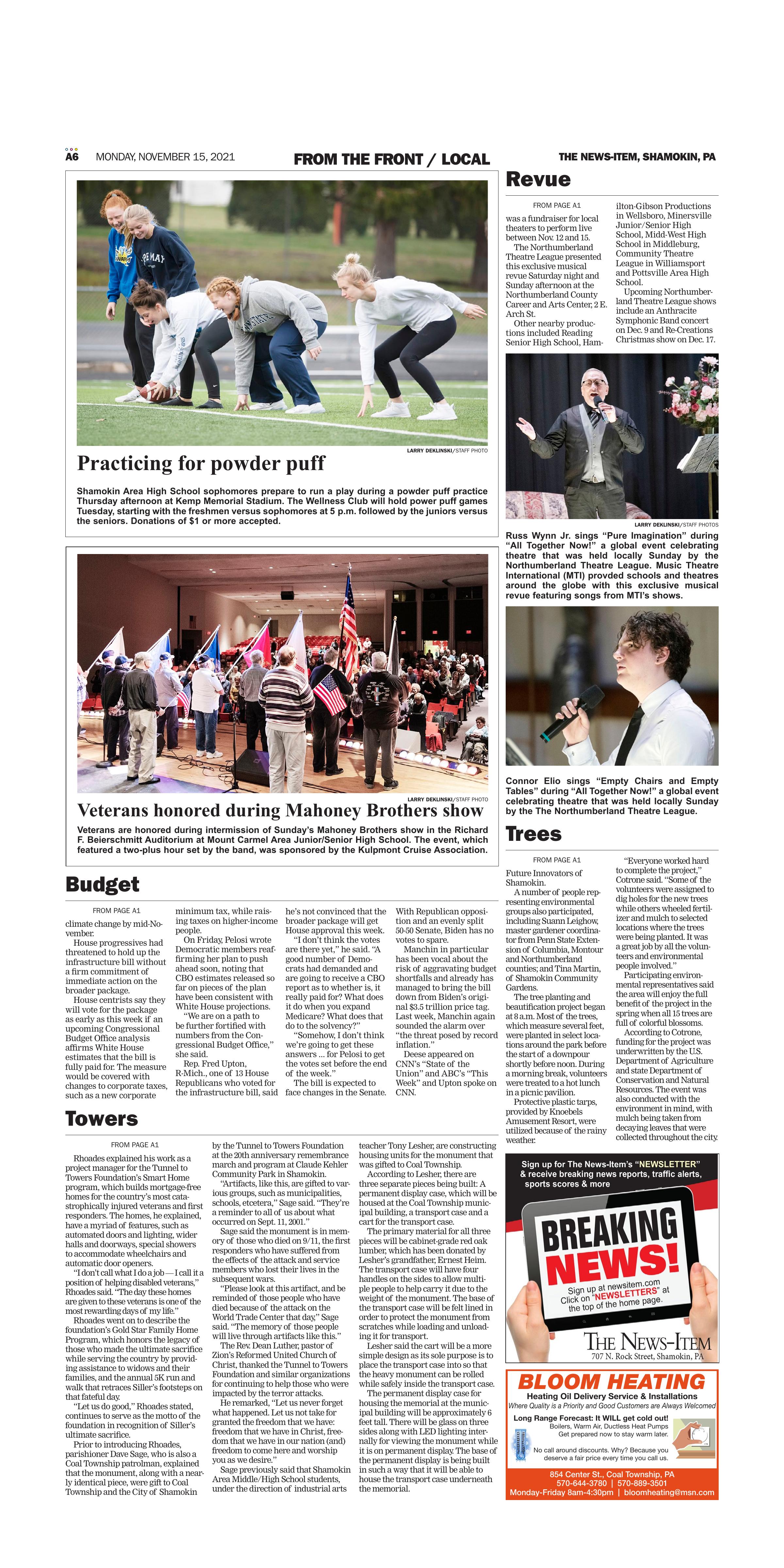 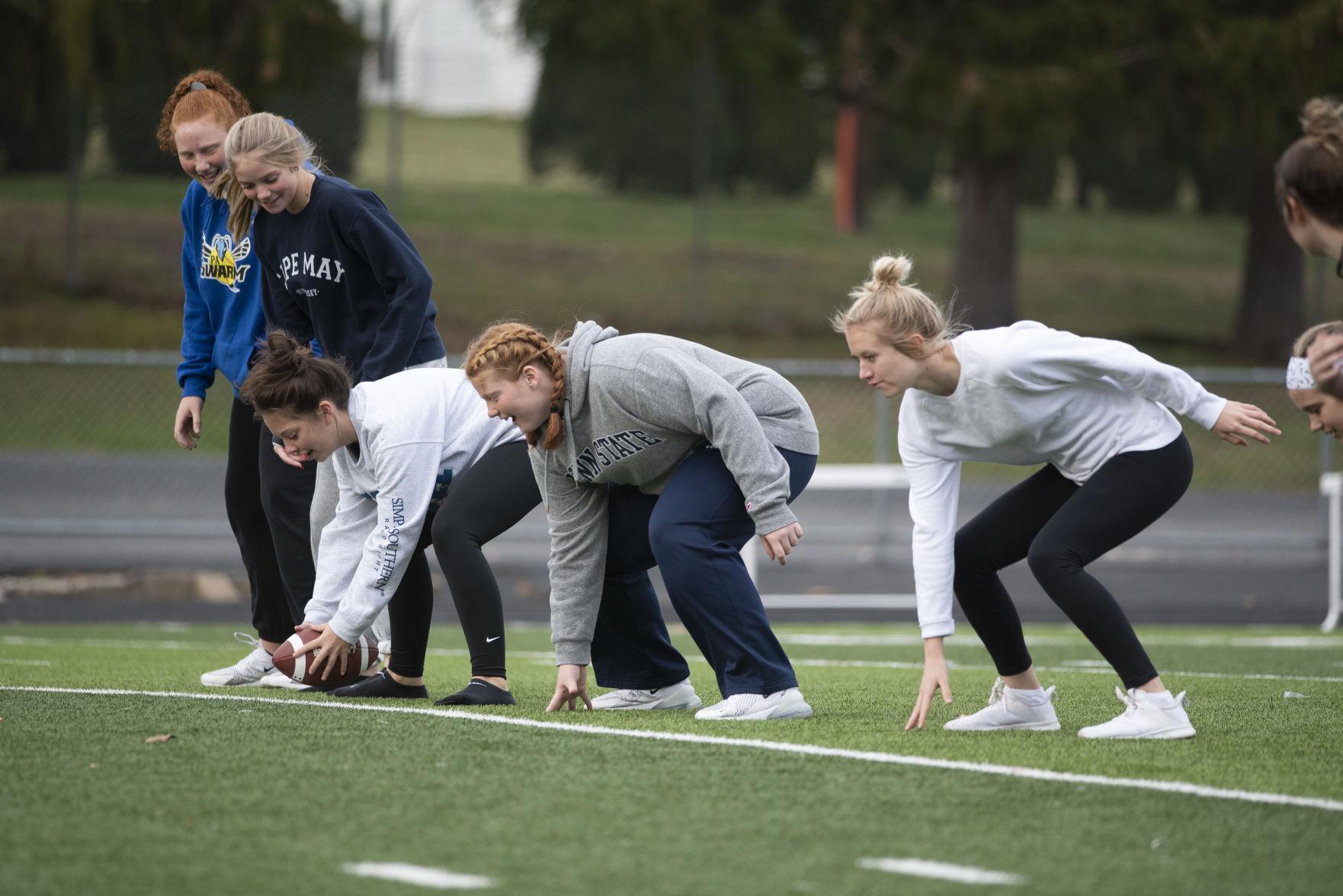 Shamokin Area High School sophomores prepare to run a play during a powder puff practice Thursday afternoon at Kemp Memorial Stadium. The Wellness Club will hold power puff games Tuesday, starting with the freshmen versus sophomores at 5 p.m. followed by the juniors versus the seniors. Donations of $1 or more accepted. 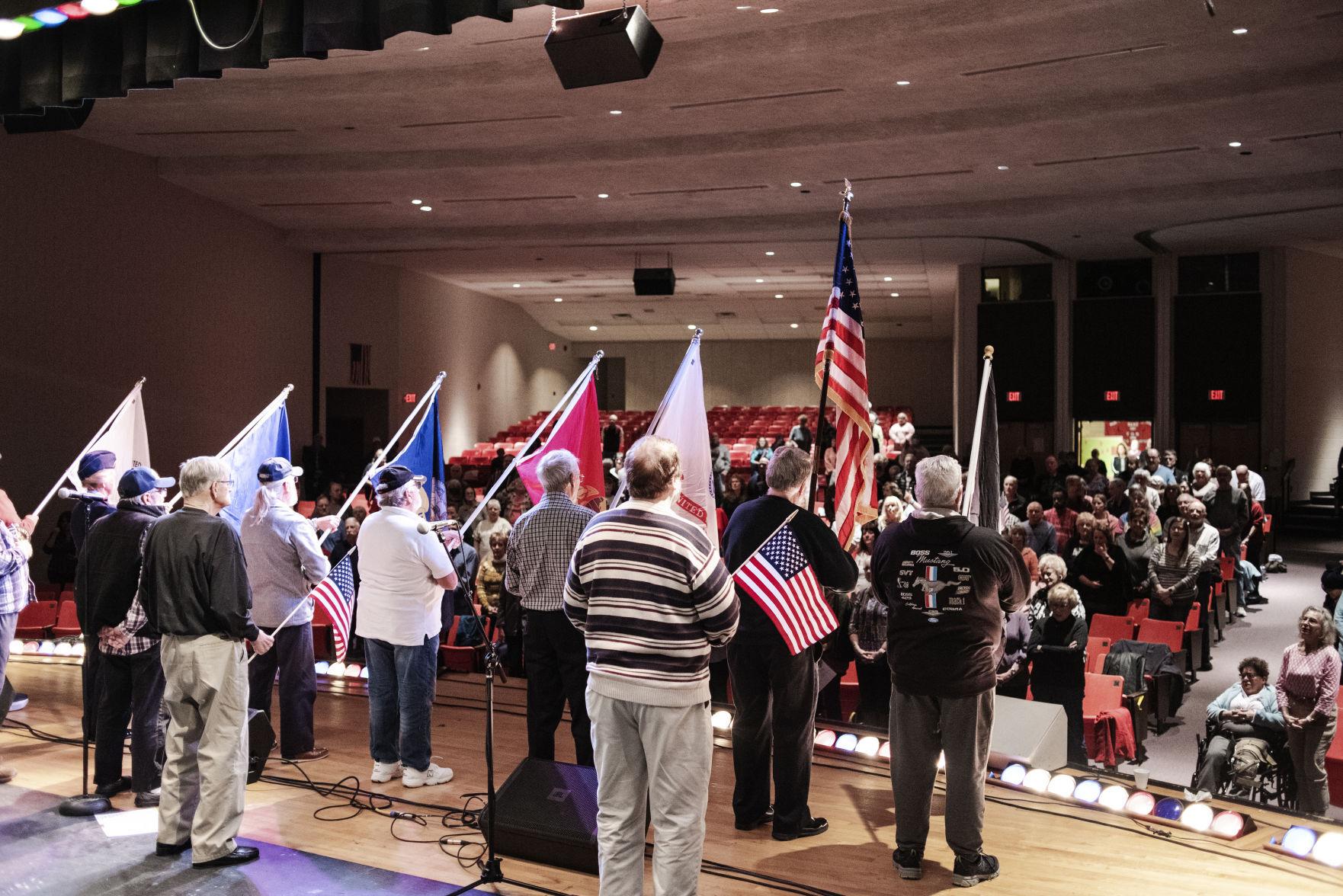 Veterans are honored during intermission of Sunday’s Mahoney Brothers show in the Richard F. Beierschmitt Auditorium at Mount Carmel Area Junior/Senior High School. The event, which featured a two-plus hour set by the band, was sponsored by the Kulpmont Cruise Association.

During Sunday’s service at Zion’s Reformed United Church of Christ, Ashland, R. Craig Rhoades speaks of a monument crafted from the remains of the World Trade Center. Rhoades spoke of the symbolism of the monument, which was gifted to Coal Township, and his work with the Stephen Siller Tunnel to Towers Foundation.

ASHLAND — The Tunnel to Towers Foundation, R. Craig Rhoades stated during Sunday’s service at Zion’s Reformed United Church of Christ, has become one of the greatest charitable organizations in the United States.

While touching a nearly 200-pound monument the foundation crafted by using two pieces of steel from the remnants of the Twin Towers, the long-time Shamokin firefighter praised the foundation for its continued effort to assist disabled first responders, veterans and widows of those who lost their lives while serving the country.

The Tunnel to Towers Foundation honors the sacrifice of Stephen Siller, a Brooklyn firefighter who was last seen running through the Brooklyn Battery Tunnel toward the burning Twin Towers on Sept. 11, 2001. It also honors military and first responders who continue to make the supreme sacrifice of life and limb for our country.

Rhoades explained his work as a project manager for the Tunnel to Towers Foundation’s Smart Home program, which builds mortgage-free homes for the country’s most catastrophically injured veterans and first responders. The homes, he explained, have a myriad of features, such as automated doors and lighting, wider halls and doorways, special showers to accommodate wheelchairs and automatic door openers.

“I don’t call what I do a job — I call it a position of helping disabled veterans,” Rhoades said. “The day these homes are given to these veterans is one of the most rewarding days of my life.”

Rhoades went on to describe the foundation’s Gold Star Family Home Program, which honors the legacy of those who made the ultimate sacrifice while serving the country by providing assistance to widows and their families, and the annual 5K run and walk that retraces Siller’s footsteps on that fateful day.

“Let us do good,” Rhoades stated, continues to serve as the motto of the foundation in recognition of Siller’s ultimate sacrifice.

Prior to introducing Rhoades, parishioner Dave Sage, who is also a Coal Township patrolman, explained that the monument, along with a nearly identical piece, were gift to Coal Township and the City of Shamokin by the Tunnel to Towers Foundation at the 20th anniversary remembrance march and program at Claude Kehler Community Park in Shamokin.

“Artifacts, like this, are gifted to various groups, such as municipalities, schools, etcetera,” Sage said. “They’re a reminder to all of us about what occurred on Sept. 11, 2001.”

Sage said the monument is in memory of those who died on 9/11, the first responders who have suffered from the effects of the attack and service members who lost their lives in the subsequent wars.

“Please look at this artifact, and be reminded of those people who have died because of the attack on the World Trade Center that day,” Sage said. “The memory of those people will live through artifacts like this.”

The Rev. Dean Luther, pastor of Zion’s Reformed United Church of Christ, thanked the Tunnel to Towers Foundation and similar organizations for continuing to help those who were impacted by the terror attacks.

Sage previously said that Shamokin Area Middle/High School students, under the direction of industrial arts teacher Tony Lesher, are constructing housing units for the monument that was gifted to Coal Township.

According to Lesher, there are three separate pieces being built: A permanent display case, which will be housed at the Coal Township municipal building, a transport case and a cart for the transport case.

The primary material for all three pieces will be cabinet-grade red oak lumber, which has been donated by Lesher’s grandfather, Ernest Heim. The transport case will have four handles on the sides to allow multiple people to help carry it due to the weight of the monument. The base of the transport case will be felt lined in order to protect the monument from scratches while loading and unloading it for transport.

Russ Wynn Jr. sings “Pure Imagination” during “All Together Now!” a global event celebrating theatre that was held locally Sunday by the Northumberland Theatre League. Music Theatre International (MTI) provded schools and theatres around the globe with this exclusive musical revue featuring songs from MTI’s shows.

Connor Elio sings “Empty Chairs and Empty Tables” during “All Together Now!” a global event celebrating theatre that was held locally Sunday by the The Northumberland Theatre League.

Connor Elio sings “Empty Chairs and Empty Tables” during “All Together Now!” a global event celebrating theatre that was held locally Sunday by the The Northumberland Theatre League. Music Theatre International (MTI) provded schools and theatres around the globe with this exclusive musical revue featuring songs from MTI’s shows.

Samantha Stancavage sings “Somewhere that’s Green” during “All Together Now!” a global event celebrating theatre that was held locally Sunday by the The Northumberland Theatre League. Music Theatre International (MTI) provded schools and theatres around the globe with this exclusive musical revue featuring songs from MTI’s shows.

SHAMOKIN — The Northumberland Theatre League this weekend participated in “All Together Now!” a global event celebrating local theatre.

Music Theatre International (MTI) provided schools and theaters around the globe with this exclusive musical revue featuring songs from MTI’s shows, such as “Ragtime,” “Les Miserables,” “Oliver!” and “Into the Woods.”

MTI described the past year-and-a-half as “extremely challenging” for theatrical organizations and offered the musical revue as a way to support the thousands of theaters, which are persevering under trying circumstances. “All Together Now!” was a fundraiser for local theaters to perform live between Nov. 12 and 15.

SHAMOKIN — Despite gloomy weather and the threat of rain, a group of environmental experts and volunteers completed a tree-planting and beautification project Saturday morning at the Claude Kehler Community Park II off Walnut Street.

Fifteen trees were planted, according to Vincent Cotrone, Penn State Extension urban forester, who said the project was planned to beautify the area and improve water quality by capturing storm water while preventing the erosion of surface soil in a wide section of the park.

The tree planting and beautification project began at 8 a.m. Most of the trees, which measure several feet, were planted in select locations around the park before the start of a downpour shortly before noon. During a morning break, volunteers were treated to a hot lunch in a picnic pavilion.

Protective plastic tarps, provided by Knoebels Amusement Resort, were utilized because of the rainy weather.

“Everyone worked hard to complete the project,” Cotrone said. “Some of the volunteers were assigned to dig holes for the new trees while others wheeled fertilizer and mulch to selected locations where the trees were being planted. It was a great job by all the volunteers and environmental people involved.”

Participating environmental representatives said the area will enjoy the full benefit of the project in the spring when all 15 trees are full of colorful blossoms.

According to Cotrone, funding for the project was underwritten by the U.S. Department of Agriculture and state Department of Conservation and Natural Resources. The event was also conducted with the environment in mind, with mulch being taken from decaying leaves that were collected throughout the city.