Subscribe to The News-Item today and get:
Free
Get Started
You are the owner of this article.
Edit Article Add New Article
You have permission to edit this article.
Edit
Welcome, Guest
Home
Obituaries
News
Business
Sports
Opinion
Arts & Living
Digital Edition
Classifieds
Legal Notices
1 of 6 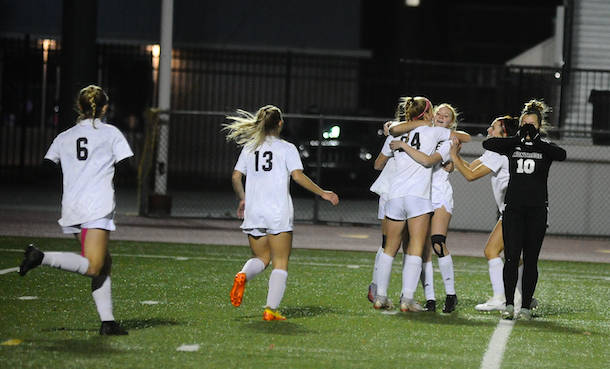 Southern Columbia teammates embrace Loren Gehret (24) after she scored her first goal on Tuesday to break the program record for most goals in a career. This was her 131st goal, and after two more later in the game, she now has 133. 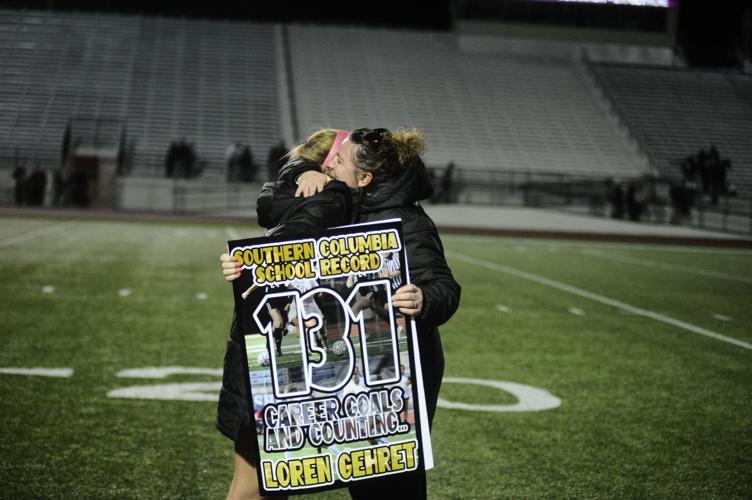 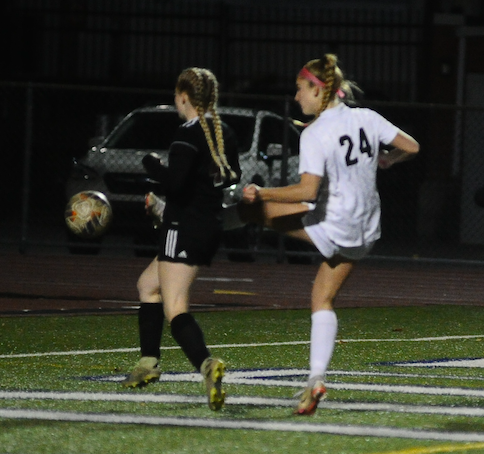 Southern Columbia’s Loren Gehret (24) boots in her record-setting goal around a Montrose defender during Tuesday’s PIAA Class 1A first-round playoff game at Memorial Stadium in Scranton. 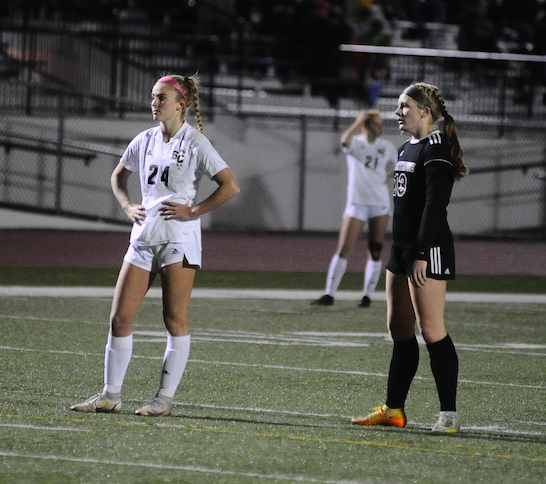 Southern Columbia’s Loren Gehret, left, catches her breath during a stoppage in Tuesday’s PIAA Class 1A first round playoff game against Montrose at Memorial Stadium in Scranton. 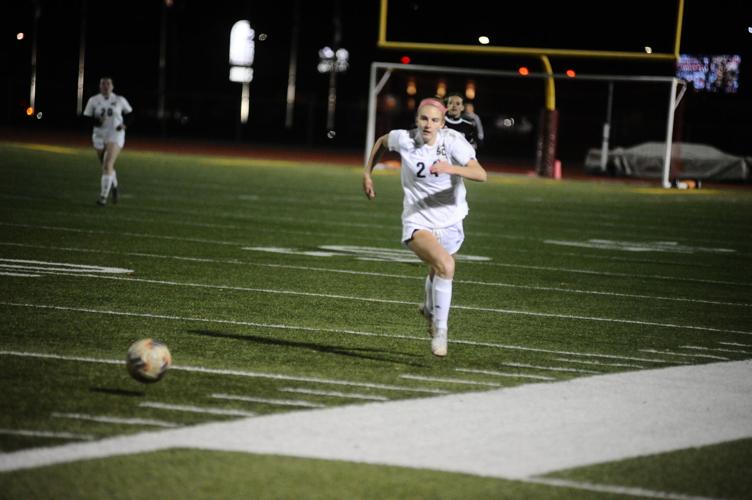 Southern Columbia’s Loren Gehret chases after the ball during Tuesday’s PIAA Class 1A first-round playoff game against Montrose at Memorial Stadium in Scranton. 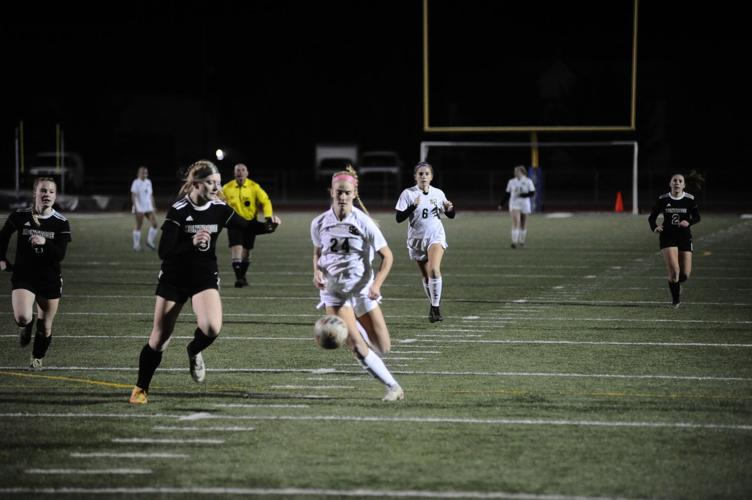 Southern Columbia teammates embrace Loren Gehret (24) after she scored her first goal on Tuesday to break the program record for most goals in a career. This was her 131st goal, and after two more later in the game, she now has 133.

Southern Columbia’s Loren Gehret (24) boots in her record-setting goal around a Montrose defender during Tuesday’s PIAA Class 1A first-round playoff game at Memorial Stadium in Scranton.

Southern Columbia’s Loren Gehret, left, catches her breath during a stoppage in Tuesday’s PIAA Class 1A first round playoff game against Montrose at Memorial Stadium in Scranton.

Southern Columbia’s Loren Gehret chases after the ball during Tuesday’s PIAA Class 1A first-round playoff game against Montrose at Memorial Stadium in Scranton.

SCRANTON — When Southern Columbia’s Loren Gehret just barely got a foot on a long beautiful pass in from Peyton Wisloski less than two minutes in to Tuesday’s PIAA Class A first-round game, sending it into the back of the net for the first goal of the night, her assistant coach, Erin Spotts, looked on and saw a version of herself.

Why? Because that goal — the first of Gehret’s three in the contest — broke the three-time state champion program’s record for most goals in a career, a 130-goal mark originally set by Spotts (formerly Snyder) that stood for 21 years.

Gehret, a senior who plans to play at Monmouth University next fall, scored her 131st, 132nd and 133rd goals of her illustrious career, and her predecessor had one of the best views inside Scranton’s Memorial Stadium for it.

“It’s not often that a coach actually gets to coach a player who breaks their record,” Spotts said. “It’s really cool to get a front row seat and to have watched her develop over the last six years.”

Spotts added that not only has it been fun for her to watch Gehret develop on the soccer field, but as a role model both on and off the field as well to so many of her underclassmen teammates, as well as future Tigers, like Spotts’ own 3-year old daughter, Caroline.

“She’s a great kid and a great player, and more importantly, she’s a great ambassador for the sport with the younger girls,” the coach praised. “My own daughter loves Loren. She is Loren’s buddy. So watching this is kind of a ‘proud mommy moment.’ It’s really cool.”

At the beginning of this year, while attending a banquet in Kansas held to honor Gehret and her fellow USCA All-Americans, the player and her assistant coach posed for a picture.

Spotts held up one finger, representing her still being first atop the school’s goal leaderboard at the time, while Gehret held up two fingers for her being second on that list after her junior season.

It was then that Spotts knew the Tigers’ star player would reverse the poses in that photo soon.

“I knew it was only a matter of time, as she needed 35 goals,” Spotts said. “When she’s active on our offense, good things happen, so I knew it was going to happen. It was kind of cool that it held at 130 with us tied for a couple days, but it was great to see her get it done.”

Gehret added: “It’s awesome. Erin and I have a really close bond. We’ve been talking about things since my freshman year. When we went to the All-American banquet last year, we were talking about how in the pictures, she’s going to hold up the one (finger) and I’ll hold up the two (fingers). And she said that hopefully one day we can switch it. It’s crazy to think that day has come.”

Gehret is the daughter of Jeremy and Nikki Gehret, who each attended Mount St. Mary’s on scholarships for soccer and basketball, respectively. She also plays basketball and competes in track and field, proving the athletic excellence runs in the family.

With 133 (and counting) career goals, paired with All-American and All-State honors would be easy to get to the head of some, Gehret has accomplished more than just about any high school soccer player in the state while remaining humble and always redistributing credit to her teammates, and that was no different after Tuesday’s historic contest.

“It makes it a lot easier when you have such great teammates,” she said. “It’s always a family, no matter what. Every year, I’ve learned from the older players, and now I’m the one passing on that info I was taught. We have a really good group of girls and always have, and I think that’s really great for the younger girls coming up into the program.”

Not only has watching Gehret over the years been a treat to watch for Spotts, as well as other players, coaches and fans, but the former record holder has at times felt like she was back in her playing days watching the current-day star.

“(Fellow assistant coach) Jen (Stine) always laughs at me when I’m over here acting like I’m finishing the ball for (Gehret),” Spotts said, laughing. “It’s cool as I look back and remember huge goals in my career and look at the ones she has. It’s a neat experience and a trip down memory lane.

“It (the record) held on for a long time, but as they say, records are meant to be broken, and I couldn’t think of a better kiddo to do it.”